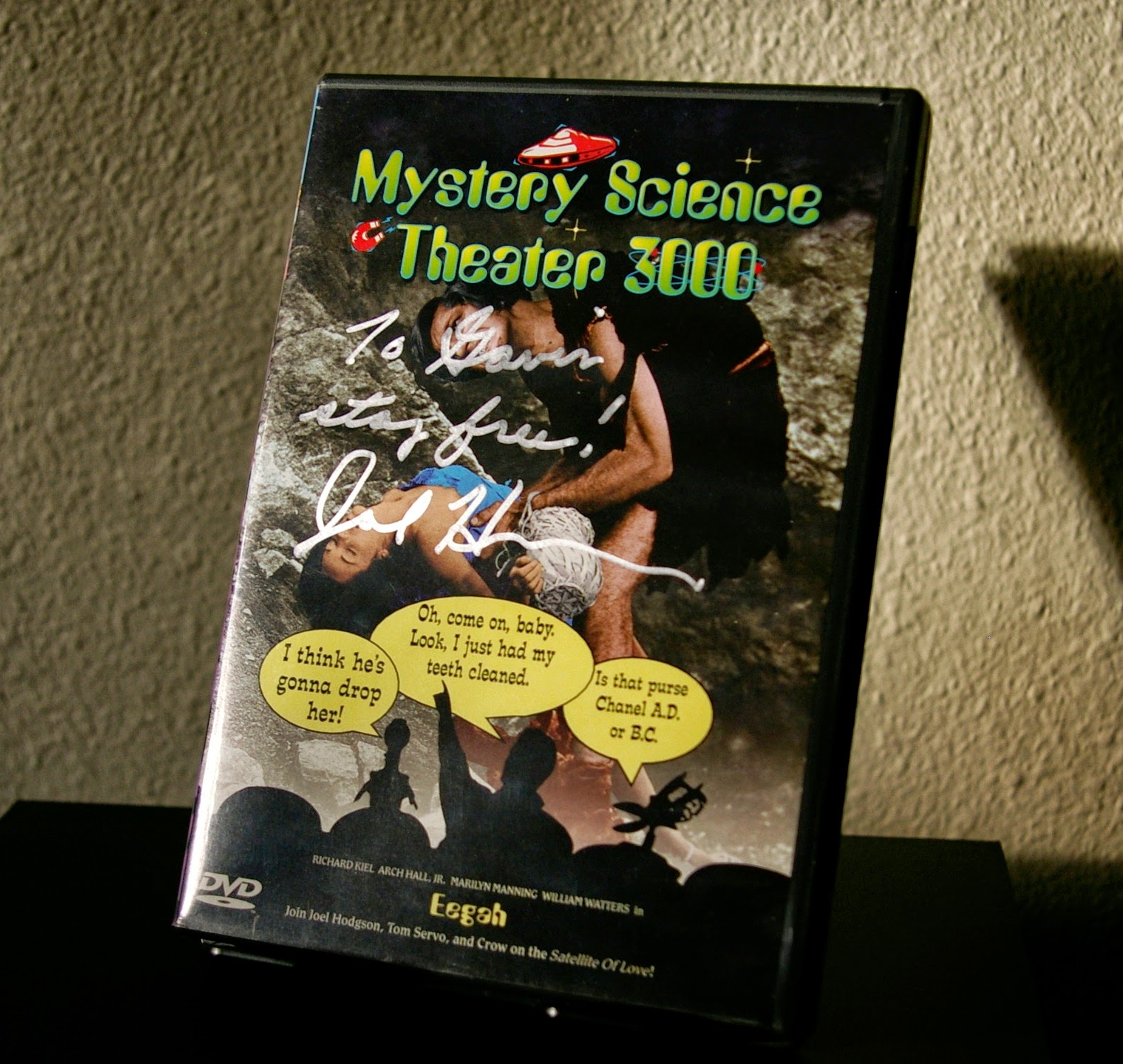 I showed off some cool Weezer stuff a couple weeks ago. Now I'm continuing my sporadic non-sports/non-cards show & tell with a signed dvd.

My all-time favorite TV show is a tie between The Simpsons and Mystery Science Theater 3000. From my teens and throughout my 20s, I had a ritual of watching an episode (or half an episode) every Sunday night before bed. It was like how I closed out the week. I don't do that anymore, but still put on an episode every so often. I've got every circulating episode, used to be on VHS, but now either on DVD or a digital file (I think they can all be found online without much trouble now, too). I won't go into explaining the show and its history here, but if you're unfamiliar with it, give its Wikipedia entry a quick peruse.

Back in Spring 2000, a guy I knew online told me he was working on a project with Joel Hodgson and broached the idea of getting his autograph for me. Needless to say, I jumped at the offer. A small batch of MST3K dvds had just been released by Rhino, with Eegah being the only Joel episode. And so that's the one he got and had signed for me. 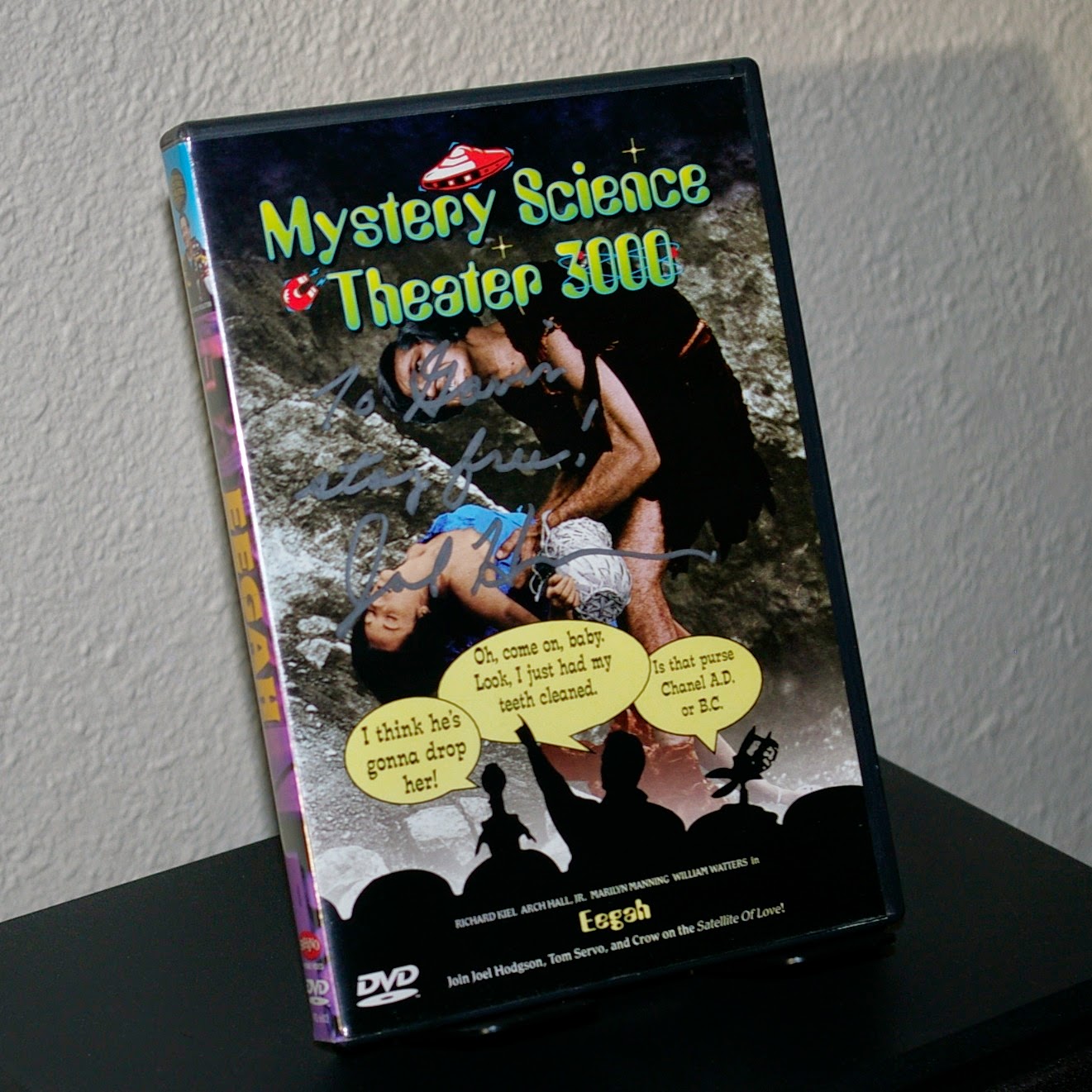 Love it! It's one of my most cherished personal possessions. And yep, the autograph is properly on the paper sleeve, not the plastic case, with a nice metallic silver sharpie. Joel even personalized it, imploring me to stay free. I'd like to think I've done a good job of following that advice. Thanks, Joel, my spirit guide and lifecoach!

Joel is a tough signature to get, apparently; I can't find any autographs of his on eBay, either in the current or completed listings.

Eegah stars Richard Kiel (a huge giant of a man best known for playing Jaws in a couple James Bond films), alongside Arch Hall Jr. (the son of the director), and pretty lady Marilyn Manning. Looks like the whole thing is on YouTube:


Eegah is a good episode, but my favorite Richard Kiel movie to be given the MST3K treatment is The Human Duplicators. That one also seems to be on YouTube for your viewing pleasure:


Richard Kiel sadly passed away just last month. (It's impressive a guy that huge lived to 74!) He's got a few auto cards out there.. maybe I'll try to pick one up someday.

Anyways, this dvd is the only piece of MST3K memorabilia I own, unless you want to count a few unsigned dvds. Oh, and I've got the Mystery Science Theater 3000: The Amazing Colossal Episode Guide book somewhere too. I once had the Clowns In The Sky CD (songs from the show), but think I may have sold it when I moved out of state (edit: nope, still got it). I remember several years ago, they auctioned off hundreds of actual props from the show on eBay. This was back in my lean days, and I was only able to put in small bids on 2 or 3 not-really-significant items that I was quickly outbid on. Bummer.

But hey, I've got this awesome dvd personalized to me from the creator Joel Hodgson himself, so I feel good about that! 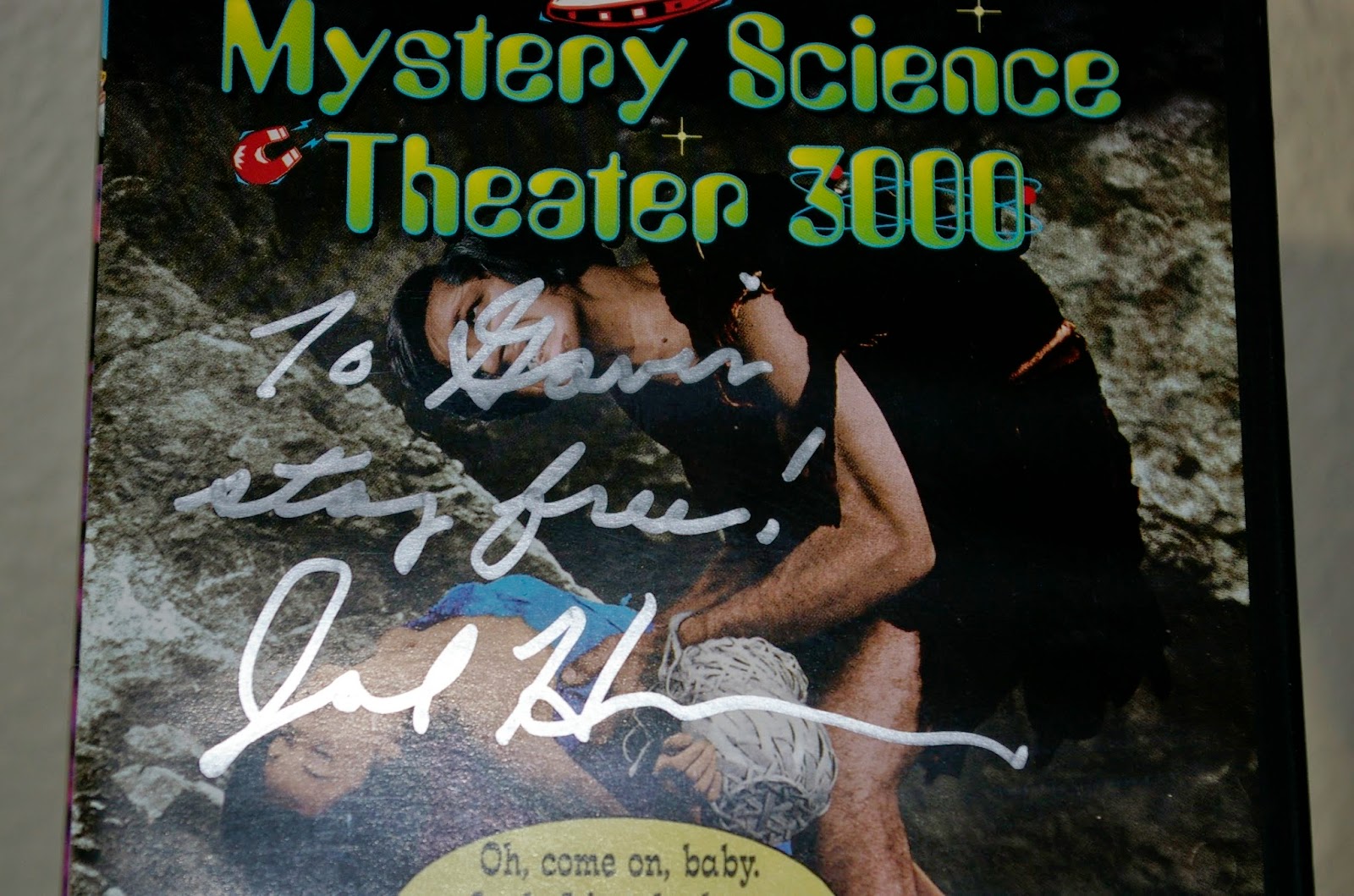 Anybody else out there a MSTie?
Posted by defgav at 5:16 PM