My card spending got a little out of hand in September, as you may have noticed with my posts over the month. Hobby boxes and vintage Clementes, oh my. I'm reeling it in for October/November "Ach du lieber, No-eBay-vember" as I'm calling it. You're all welcomed to observe it together with me. I'm discouraging any eBay purchases besides possible exceptions for top tier collecting focuses, which for me includes 2004 Topps Retired autos and seldom-seen main PC hits. Especially with my employment situation on shaky ground at the moment (looks like my last day is penciled in as November 7th), I simply can't spend so much on cards for the next several weeks. But I've got some neat stuff in the pipeline that I'll be showing off.

That 2014 Donruss box I won really triggered a hobby box ripping bender for me.. that lead to 2006 Fleer Showcase and shortly thereafter 2006 Ovation. I recently went looking for inexpensive hobby boxes online and found a 1994 Upper Deck Collectors Choice Series One box for pretty cheap. 36 packs! 12 cards each pack! Oh, those were the days. 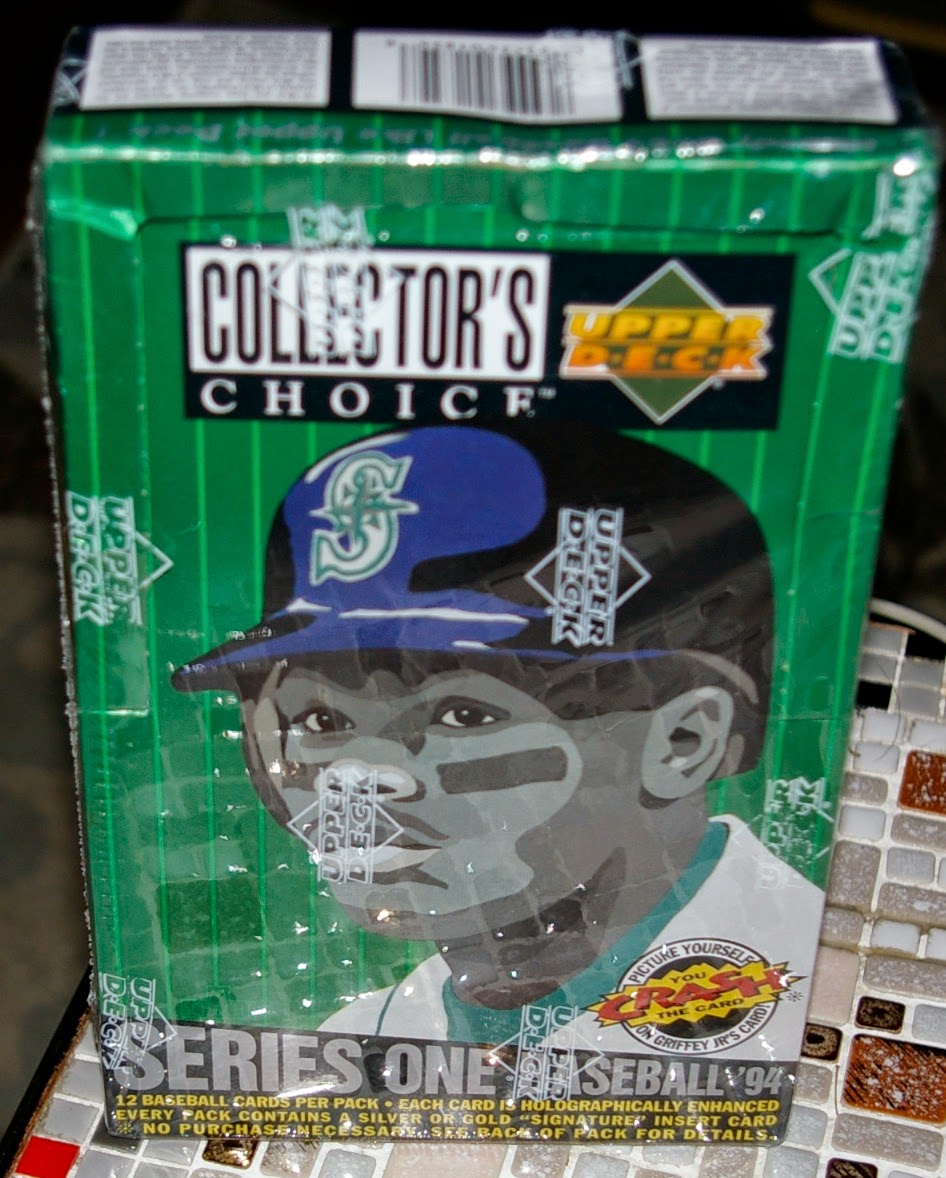 Sure, it might be considered "junk wax" to some, and the only hits to possibly pull are (facsimile) "signature" parallels, but I figured it was a cheap ripping fix. I originally stopped collecting in mid 1993, and I've never ripped any Collector's Choice. These cards are known for their quirky photography, and not their "sick mojo hits". I've gotten a small handful of these cards in trades and whatnot in recent years, but don't have much from this product.

So here we go! I'm not going to post a pic of each pack, as 36 is quite a lot, but I'll show a bunch of highlights. While I should be a good blogger and scan all these cards and talk about them individually, perhaps over several posts, what I'm instead doing is taking a photo of several cards at a time. Sorry, but it's the time-efficient way to go (aka I'm lazy). But I'll break it up over a couple posts.

First up are the "silver signature" parallels. These come one per pack, a similar concept to Topps Gold parallels of the early 90s. Each card is the same as the base except there's a foil facsimile autograph on the front. There are also rarer "gold signature" parallels, but those are only about one per box (I haven't pulled one yet). 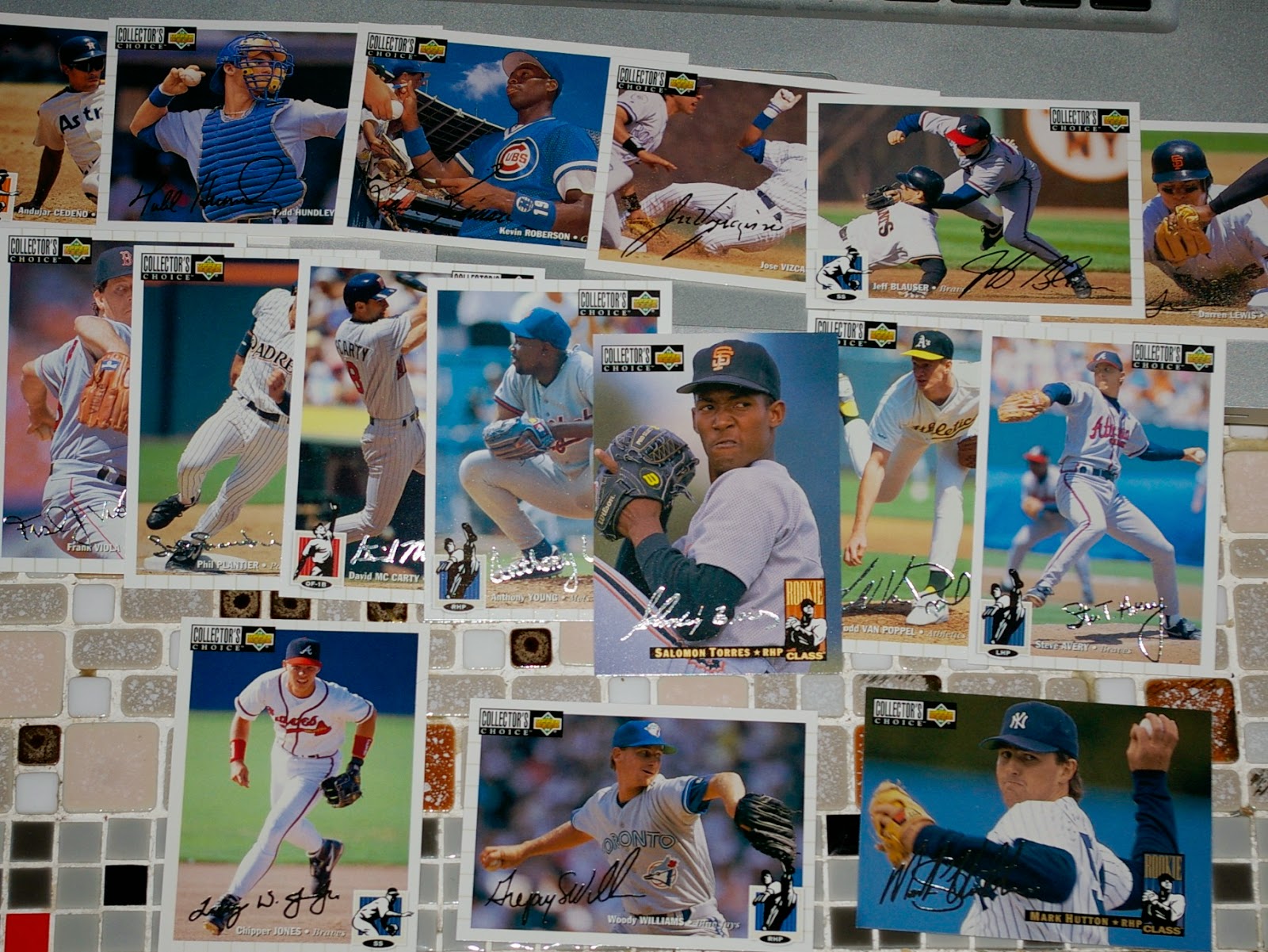 Above are  my silver signatures up to this point. Seems to be heavy on Braves, with the best hit being the Larry W. Jones, Jr. I also like the Woody Williams (what is his real name? Looks like he signed "Grepy." Oh, Gregory), otherwise these are all available for trade.

Next are what will likely stick around in my collection via PCs and whatnot. 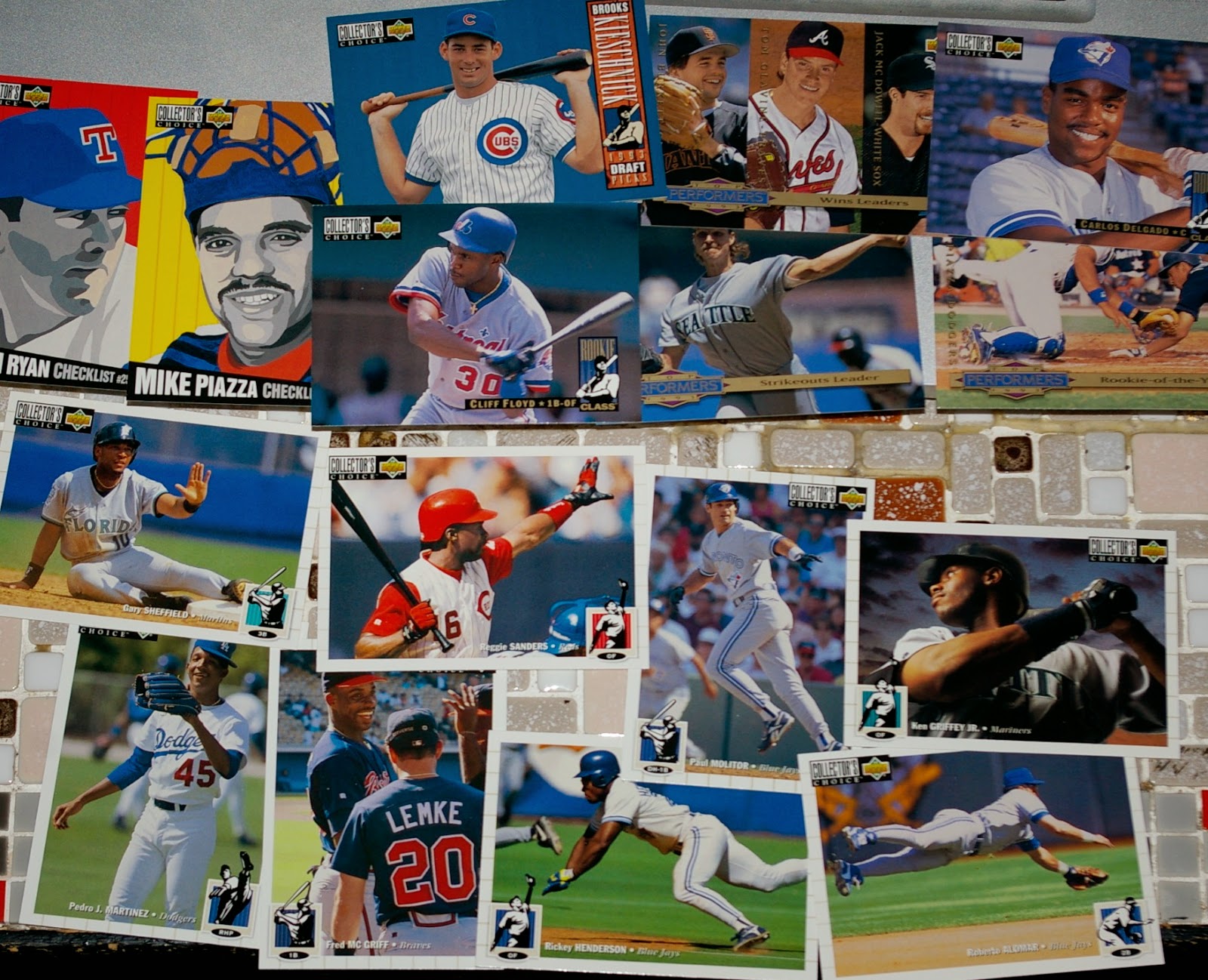 That Griffey is pretty amazing. How have I never seen it before? You'd think it'd be an iconic card known far and wide. Like, if that photo was on his '89 Bowman card or something... wow.

The Rickey/Alomar duo at the bottom look great jumping away from each other like guys in a buddy action movie jumping to safety as a bomb explodes. Actually, even teammate Paul Molitor above seems to be getting in on the excitement, though he'd be the one you think got killed, but then he eventually appears from the smoke and rubble, coughing and bruised, but he'll be alright, and the movie has its feel-good ending.

Finally, here are just a few (of the many) interesting photos that caught my eye. Great set. I'll post part 2 of this box soon. If anybody out there is working on completing the full set or a team set, let me know, and I'd be happy to thin out my stack on you.
Posted by defgav at 3:56 PM