All work and no baseball cards makes Gavin a dull boy

The company I work for is moving to Georgia later this year. As such, my co-workers have been jumping ship to other jobs (sellouts!) and those of us sticking around just have to take up the slack for the next 2 or 3 months until operations move over there and things slow down here, eventually drying up around the end of the year. A key person in our department abruptly left this week, and I'll be the go-to guy for picking up her duties. So that means it'll be a busy summer for me. Fun. :(

You probably don't remember, but back in March I busted a box of 1998 Bowman Series 2 and after I showed off the highlights I said, "Next up is a box of 1999 Bowman Series 1 from the same seller. Stay tuned!," or words to that effect. Now, I'm usually a ripping fiend, and unopened packs of baseball cards in my house don't stay unopened for long. But I also have a tendency to get cranky on days when I don't get any new baseball cards.

So recently I've adopted the idea of having a hobby box (or the like) on hand at all times so that I can bust a single pack of cards on days when I otherwise haven't gotten any new cards. It's really a nice little pick-me-up, even if it's only cheap stuff and nothing of note is pulled. Just a nice little fixx for a pack addict.

The inaugural box for this new plan was the aforementioned 1999 Bowman Series 1. Took me 2 or 3 months, but I recently got through it, one otherwise cardless day at a time. Let's check out the highlights. 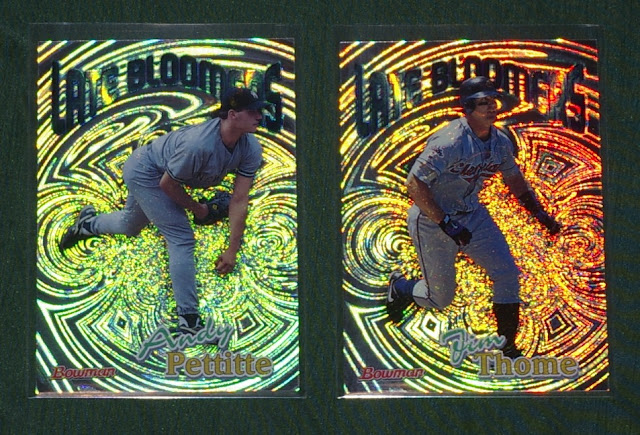 These psychedelic cards provide a welcome break from the drab Bowman base cards. I suppose Pettitte and Thome are both decent names to pull. Thome is a guy I've thought about PCing, but haven't really pulled the trigger yet. Maybe if/when he gets The Call. 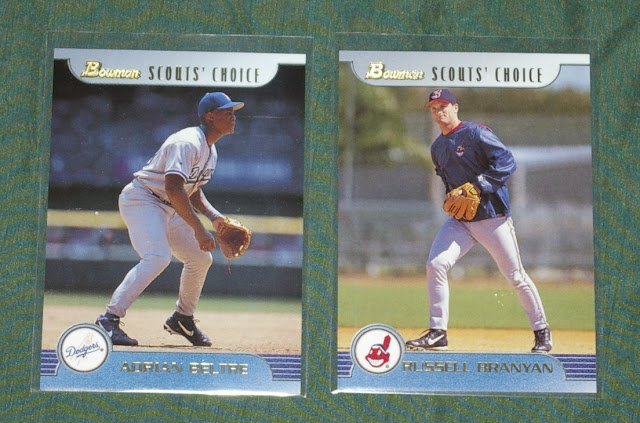 As with the Late Bloomers inserts, these Scouts' Choice cards are also 2 per box. Adrian Beltre is obviously the bigger hit here, still working on a fine career. Russell Branyan managed to stick around in the Bigs for parts of 14 seasons, so he wasn't exactly a bust either. 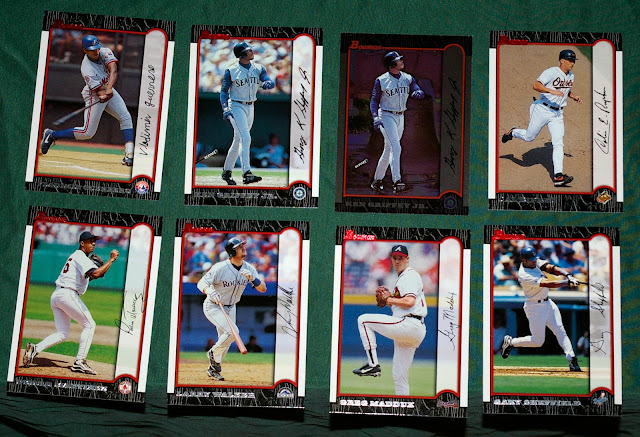 Here are the PC guys I pulled, highlighted by a Griffey base and the foil home state parallel (That's the liberty bell in the background). 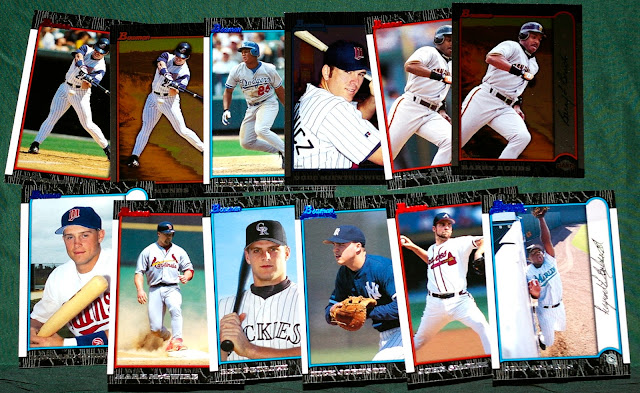 And here are a few other tentative keepers for me. 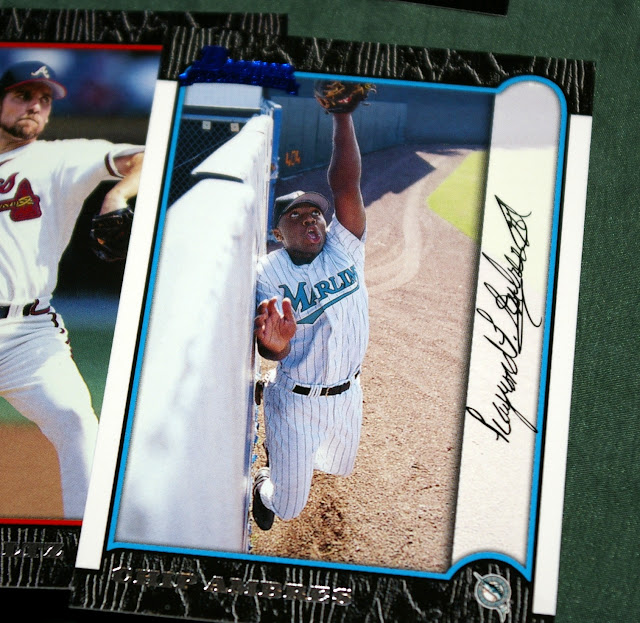 I wasn't familiar with Chip Ambers, but this card definitely stood out thanks to the spectacular photo, a rarity in Bowman sets. Yeah, it's staged, I'm sure.. but still a great shot.

So there you have it. Was that $20 worth of cards? Even with the not-pictured stack of other cards from the box, probably not, but the thrill/fun of the rip is really where it's at. The prospect of having a back-up stash of packs helps me from tearing my mailbox off the wall in a rage when I come home after a hard day's work and find it empty.

I definitely plan to try to keep packs around to cheer me up when I need it, and make "cardless day breaks" a regular thing. I can wake up in the morning and know that regardless of what else happens, at the end of the day, there will be fresh baseball cards waiting for me. Isn't that beautiful? Even on Sundays and holidays. It takes some restraint for me not to just bust a box in one sitting (which I still do sometimes, like with my recent Archives boxes), but I think it's worth it.  (I'll admit that last Saturday night, I broke down and ripped my Sunday pack at a quarter past midnight.. hey, it counts, technically! Otherwise, I've been good and not cheated.)

Of course it's more financially responsible to use junk wax for this purpose, but I'd rather not accumulate more '91 Donruss, '88 Topps, and the like, so I'll at least try to find cheap boxes for sets I don't have much from in my collection, like with this late 90s Bowman. That way, I can at least pick up a few cards for my various PCs and maybe have a shot at a chase card of some sort to up the thrill. (I pulled an auto from my '98 Bowman box, but wasn't as lucky this time.)

I'm currently working on a box of 2014 Prizm Draft (ordered along with the Archives boxes to push me past the free-shipping threshold), which I'll show off after I eventually rip through it.
Posted by defgav at 4:19 PM