minor leaguers I've got my eye on

I don't follow the minor leagues much. I like collecting prospect cards, but it's more like a "wake me if/when he makes it" situation, rather than me checking his progress on a regular basis.

Even with my team the Padres, I know the names of some of the brighter prospects, but don't pay them much attention other than crossing my fingers that they become the next Mike Trout someday.

Portland (or a suburb of it, anyways) does have a minor league team, the Hillsboro Hops. I've never gone to one of their games, but think I might try this year for the fun of it. I feel bad I never saw a Portland Beavers game while they were around. Haven't been to a ballgame in years. To give you an idea of how long it's been: the last game I was at, Barry Bonds played. I can't recall whether the Padres kept him in the yard that evening or not. Hopefully I dig up the ticket stub someday and I'll be able to look it up.

Anyways, there are about 3 guys in the minors that I actually do try to check up on once in a while. I happened to pick up a card of each of them recently from eBay's biggest seller of modern minor league cards. Let's take a look at the cards and check in with how they're doing so far this year. 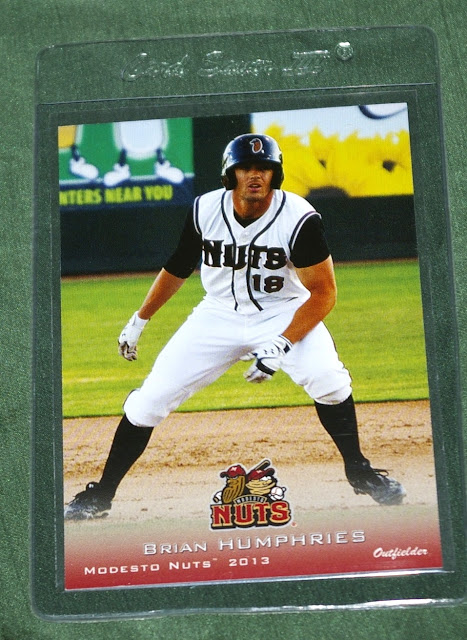 Brian Humphries. This former Rockies draft pick (and fellow Granite Hills High School alum) was released by Colorado at the end of spring training this year. This was just a couple days after I shelled out to buy his only superfractor, so needless to say I was a bit bummed by this turn of events. I kept an eye on his b-r page, waiting to see if he'd catch on with another organization. After several weeks of nothing, I kinda assumed he gave up on baseball and followed another pursuit (hey, he went to Pepperdine, so he's no dummy, right? I'm sure he could do lots with his life.) But looks like he latched on with the Sioux Falls Canaries of the Independent League for 2015. After a hot start (was over .300 for a while there), he's currently down to a .268 average with no home runs. Here's hoping he can put together a quality season and catch the interest of a MLB club and get back on track to crack the bigs. As this card notes, it's from 2013, during his time on the Modesto Nuts. Nice action shot on the basepaths. 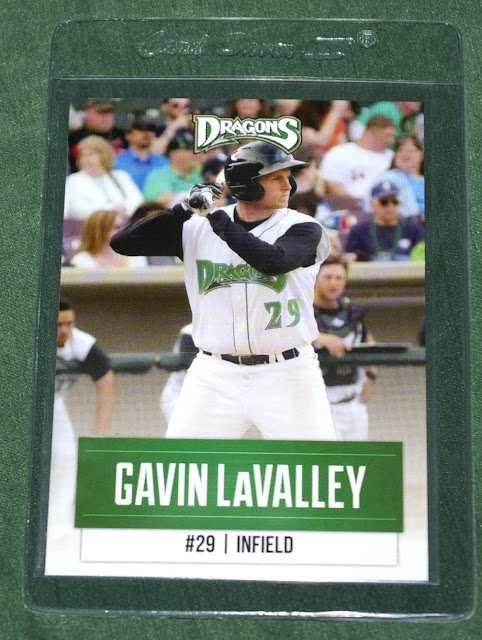 My boi Gavin LaValley! While I have a ton of LaValley cards, I actually only have just 3 of his cards, but several parallels of each. So it's refreshing to get a new card (photo) of the guy. This is a brand new card from 2015. As of this writing, he's batting .255 with one dinger for the Dayton Dragons. Not a great start, but I think he can turn it around. He's a guy I collect because our parents both liked the name Gavin. 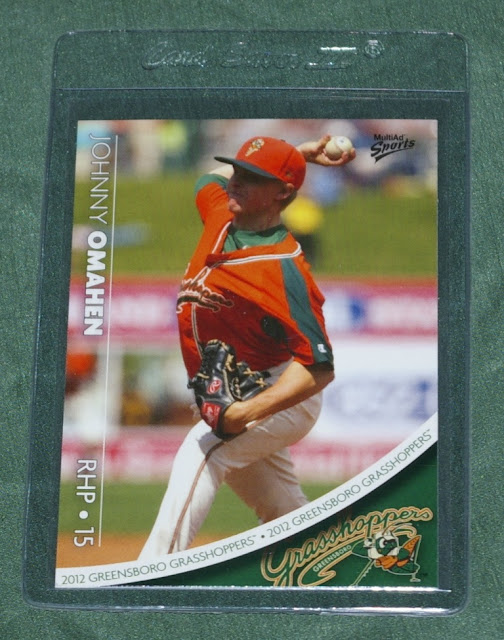 Johnny Omahen. Here's another fellow Granite Hills Eagle. Gosh dang it, turns out I already owned this card! My bad for not checking first. Oh well, now I have a dupe to maybe try getting a TTM autograph sometime if/when I ever start actually trying to get thru-the-mail autographs. Anyways, Omahen was originally drafted by the Marlins, released by them, had a nice year on an independent team, then signed with the Diamondbacks organization. He's doing pretty good so far in 2015, currently 6-0 (perfect!) with a 2.42 ERA in A+ ball down in Visalia, CA. Keep it up, Johnny. I hope he keeps climbing the ladder and gets to pitch up top in AZ in a couple years.

Honorable mention to Gavin Cecchini. He's another Gavin that I collect, but he's got so many cards (the Mets' 1st round pick in 2012) that it kind of overwhelms me so I don't proactively go after his cards much. After three unspectacular years in the minors, it looks like he's putting it together and is doing quite well this year in AA (.341). Good luck, Gavin! Hope to see you at short in NY soon.

One last card to show. Since this is somewhat of a "checking in with the Guys From Granite minicollection" (not counting the Gavins), I'll stray from the minor league topic to show a nice addition to my Granite Hills card collection... 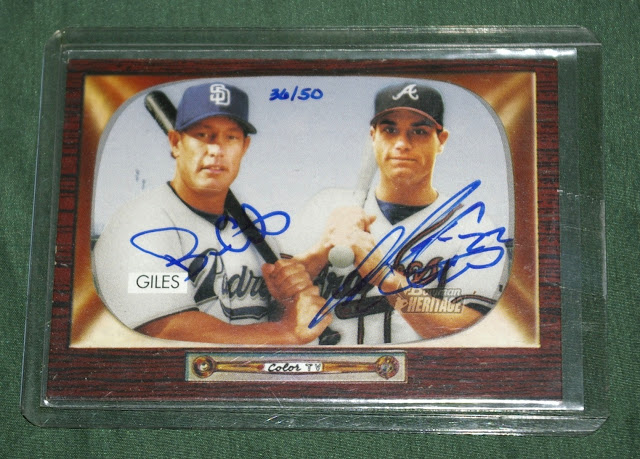 I had a saved eBay search for this card for a while. It recently popped up and I was happy to grab it for the price of a blaster. The Giles Bros. have a few dual autos out there (I already had a couple), but this is one of the very few (only?) to feature on-card signatures, which I greatly appreciate. I still haven't gotten around to posting my PCs of Brian and Marcus Giles, but I'll get around to it one of these days.

Thanks for swinging by!
Posted by defgav at 12:10 AM