Welp, I busted a box of 2015 Pro Debut a few weeks back and it was a fun enough break to where I took a look on eBay for cheap (sub 50) hobby boxes of other years of the product. I ended up winning a box of the inaugural year, 2010 Series 2-- yeah, I guess they broke it up into a couple sets back then. The hotter box is Series 1, featuring Mike Trout and footballer Russell Wilson. But oh well, Series 2 is a cheaper box. Maybe it'll have something nice for me.

Ya'll ready for this? Let's bust it open. 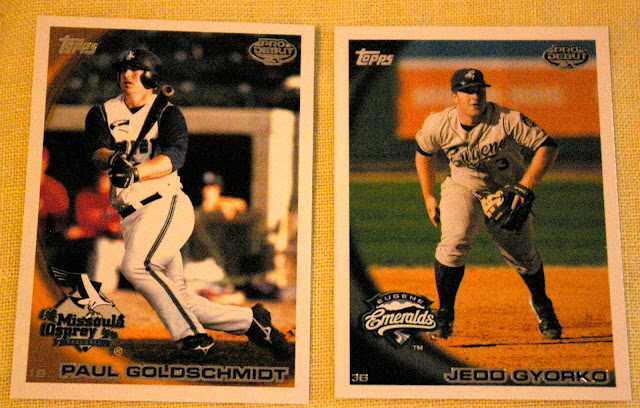 A couple PC hits for me.. Goldy and Gyorko. These are my highlights from the box. In hindsight, probably should have saved $40+ and got them offa Just Commons or something. 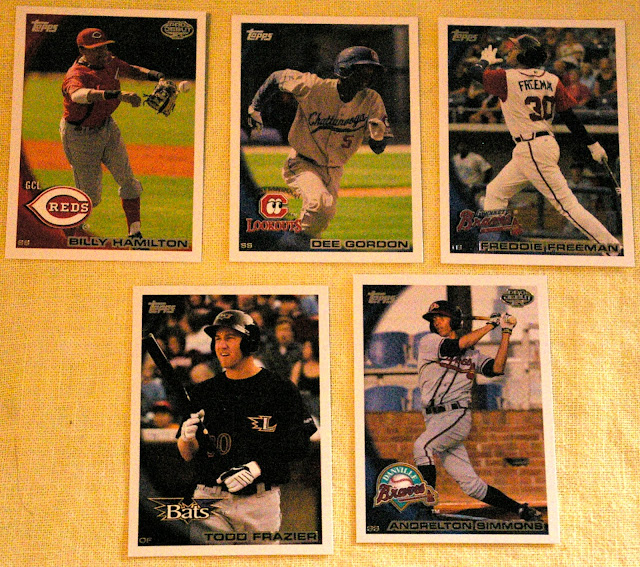 More guys who went onto be decent major leaguers. Sorry these pictures kinda suck, but it's hard to get it so that the names are readable thanks to the foil names on a dark background. Yep, 2010 Topps design is not very photogenic. 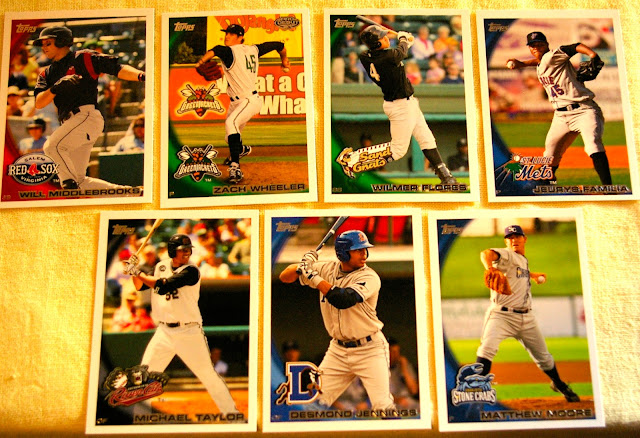 Some more names I recognized, including a bunch of Mets. 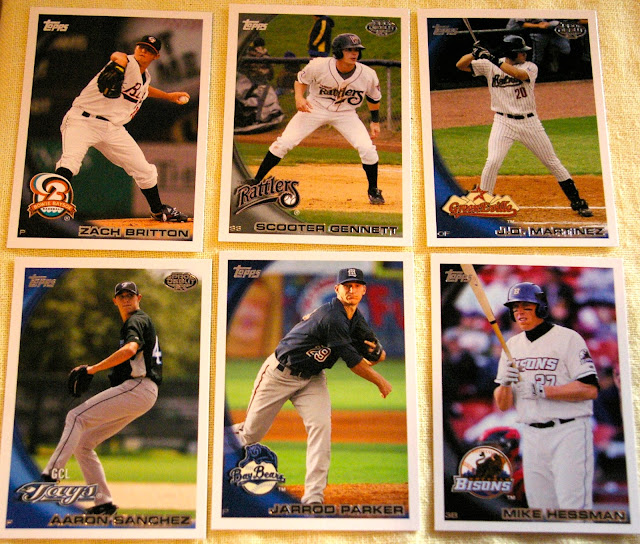 More dudes that ring a bell for me, including MiLB All-Time Home Run King, Mike Hessman. 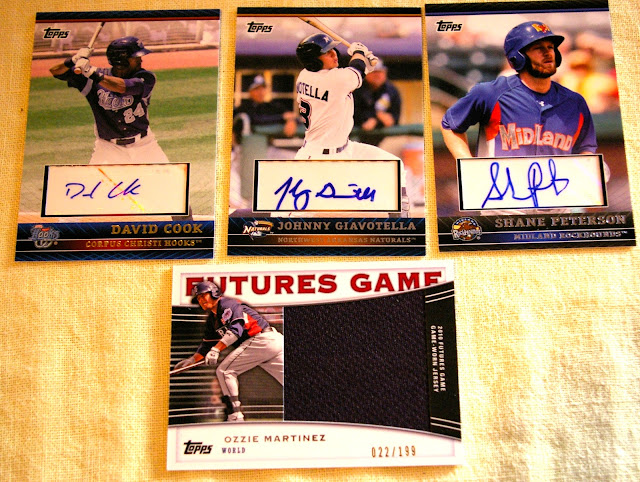 Here are my hits! Quote-unquote hits, that is. Good news is I got an extra auto (only 2 are promised, yet I pulled 3), but the bad news is all these guys are nobodies. The best name here is Johnny Giavotella, who had a decent 2015 season with the Angels. You might remember I just pulled a nice Giavotella parallel out of 2015 Update a couple weeks ago. It's like the Baseball Card Gods are telling me to start a Johnny G. PC!
The David Cook auto is a gold parallel #'d /50. That's the good news; the bad news is he called it quits a couple years ago, never making The Show.
Shane Peterson performed at replacement-level in 93 games for the Brewers this past season, so at least he made it.
Ozzie Martinez made the majors for a few games in 2010/2011, but spent 2015 down in AA. Shame; that's a nice big swatch of fabric, #'d /199. 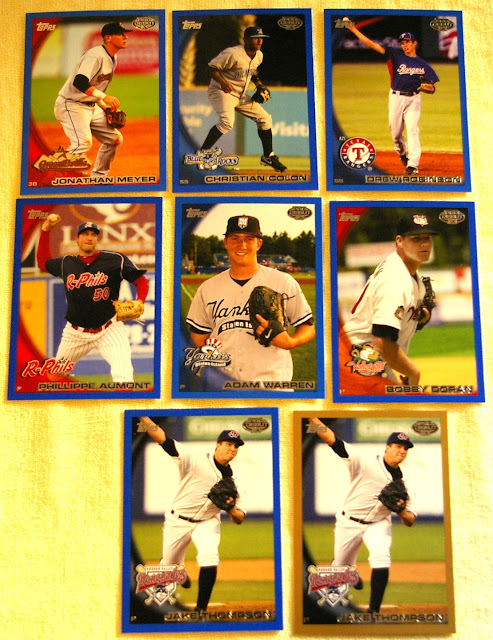 Here are my parallels. After only getting ONE freaking parallel in my 2015 Pro Debut box (must have been a parallel "cold box"), I was happy to get a fair amount of color in this box, with several lovely blues. The bad news? All nobodies. My greatest want in the entire universe was to pull a Goldschmidt blue parallel, but I failed. I pulled a base card of him, at least, but it was still a failure on the box with no Goldy parallel. The only decent name here is Adam Warren, who had a solid '15 with the Yanks; Maybe Zippy will be interested in it since it's a Staten Island Yankee card. On the bottom there, you see this was a "Jake Thompson hot box" with both a blue (/369 or so) and the only gold of the box (/50). Jake didn't pitch last season.. not sure if he retired or was injured; up through 2014 he had decent stats in the minors. There's also another "Jake Thompson" in the game, so it's confusing. 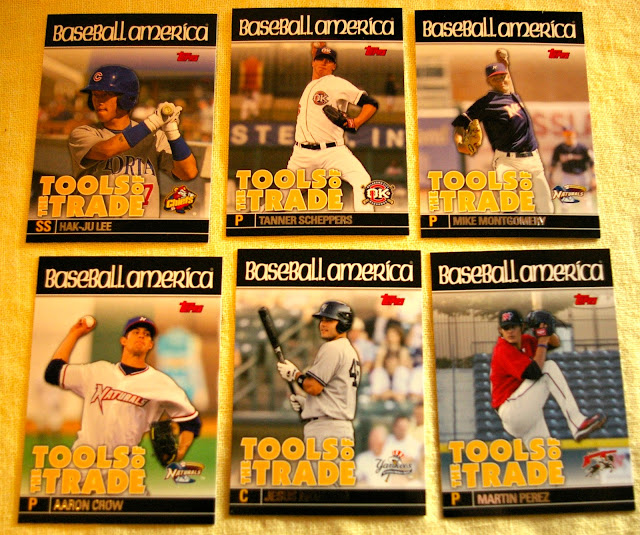 Some of these inserts. Mostly nobodies. 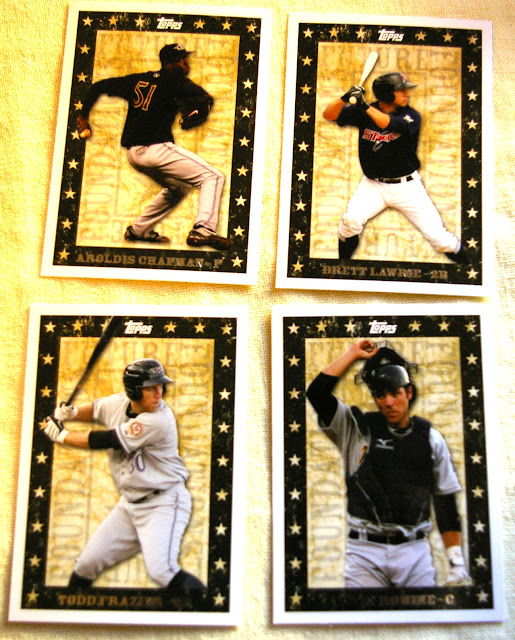 And some of these inserts. Shockingly, some decent names in this group. Austin Romine is the one in the lower right.

I could pretty much be talked out of any of this shit besides the Goldy and Gyorko.. so just me know if you're interested in trading. Some of the bigger names might take some convincing. I also obviously have lots of lesser base cards not pictured.

Question for you team collectors out there: Do you consider minor league cards like this as belonging to the respective major league parent club? These cards kinda suck in that they don't list anywhere which parent club they're affiliated with, so I may have to do some research when I sort these up by team into my trade box.

So there you go. The box was nice in that I got a bonus hit and several parallels, but a dud in that all my hits and parallels weren't of notable players. Not a single goddamned one. Ah well, such is the risk of busting a minor league product. Oh, and there were several dupes in the box, too. Still fun to crack open, I suppose. But yeah, after this fruitless break, I think my itch to rip has been satisfied for a while. I don't plan on busting more boxes until Xmas (hopefully I get a couple boxes of cards as gifts).

In other news, I just sold the Stan Musial auto I bought back in May. Sad to see it go, and I enjoyed it while I had it, but at the end of the day, I wasn't that attached to it. After spending a lot on cards in recent months, I felt like I needed to sell something nice to help balance out. Nearly doubled my money on it, at least. Stan and I will meet again (Still on the hunt for his 2004 Retired refractor auto.) 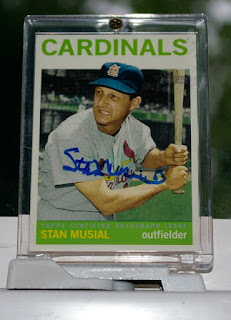 Thanks for getting through this post! Hope you all have a nice holiday.
Posted by defgav at 2:55 PM