The thrilling conclusion of my 2015 Pro Debut box

Yesterday I showed off some base card highlights from my 2015 Topps Pro Debut hobby box. I saved the good stuff for last, so now let's check out the hits and inserts. 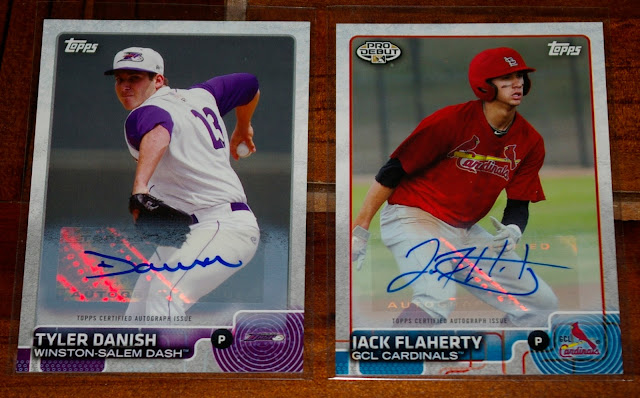 Tyler Danish didn't allow an earned run in 94 innings pitched in his senior year of high school, and thanks to that performance, got drafted by the White Sox in the second round of the 2013 draft. He glided up the ladder his first couple pro seasons, but 2015 saw his WHIP balloon to 1.655 in Double A. Hopefully he can right the ship in 2016.

Jack Flaherty's card features a rare "pitcher on the basepaths" photo, and what appears to be a questionable photoshop job. One plus to this product is the real photos, as opposed to the 'shopped prospects found in Bowman and Prizm Draft. But I guess some doctored shots get in, too.

Anyways, Jack was named something like the California high school player of the year in 2014. He had a letter of intent for University of North Carolina, but signed with the Cardinals after they selected him 34th overall in the 2014 draft, with their compensation pick for failing to re-sign Carlos Beltrán. He's done pretty well as a pro so far, striking out 125 in 117.2 innings with just 35 walks. The back of the card also mentions he's also formidable base-stealing threat, which might justify the photo selection.

So, while not terribly exciting, those are a couple promising young pitchers to pull. It sucks that they're sticker-graphs, but what are you gonna do? 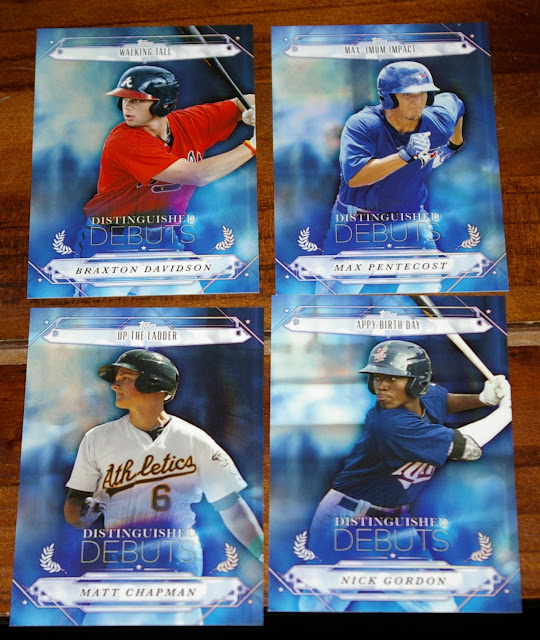 Distinguished Debuts is the most common insert set, seeded 4 per box. These would have probably looked nice if they were refractors, but alas, nothing shiny in this product.

Promo Night Uniforms are seeded 2 per box. That first one is kinda boring.. Italian Heritage night or something. But as a Star Wars fan, I was happy to pull that second one. It's not the best looking uniform, but it's supposed to be a Chewbacca getup.

My two promised memorabilia cards disappointed. When I pulled the first one, I was like, "Alright, whatever, it's kinda cool I guess." But when I pulled the second one, I was like, "Aw, come on! Another one of these relic cop-outs?" These are worthless unless maybe you pull one of the serial numbered parallels, of which these are not. I would have much rather pulled one of the "Fragments of the Farm" relics with like infield dirt and pieces of chairs and stuff. Even a regular jersey swatch from a fringe prospect would have been better than a manipatch thing like these. These two guys, Sean Newcomb and Braden Shipley, are fine, I guess, but nobody too exciting. What's up with all 4 of my promised hits being pitchers? Boo. As Tony L. always says, there's no such thing as a pitching prospect. For every Kershaw, there are 10,000 Van Poppels. 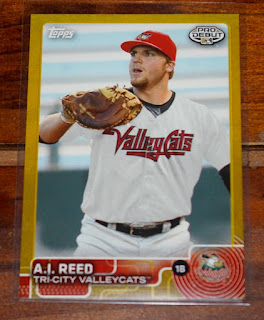 Here's the solitary parallel I pulled from my box. That's right, just one goddamned parallel. Pro Debut really needs to step up their parallel game. Give me color! Give me shininess! Give me value! If I were to do a comparison with the other prospect product I've opened in the past year, Prizm Draft, Prizm would definitely get the nod with lots of colorful, serial-numbered parallels in every box. On-card autographs are another big plus Prizm has over Pro Debut. But as for base cards, Panini once again craps the bed, overdoing that "steel floor plate" look, and of course the sterilized, logoless photos. So decent photos and base design are what help put Pro Debut ahead. I just wish they had on-card autos and more, prettier parallels.

But back to this guy..when I pulled this A.J. Reed gold parallel #'d 44/50, I didn't think much of it since his name didn't ring a bell. But then I looked up his stats and saw he led all of the minor leagues with 34 home runs this past season, with a .340 average to boot. So this might turn out to be a pretty decent pull if he can continue mashing like that.


But what really saved my box from being a dud... 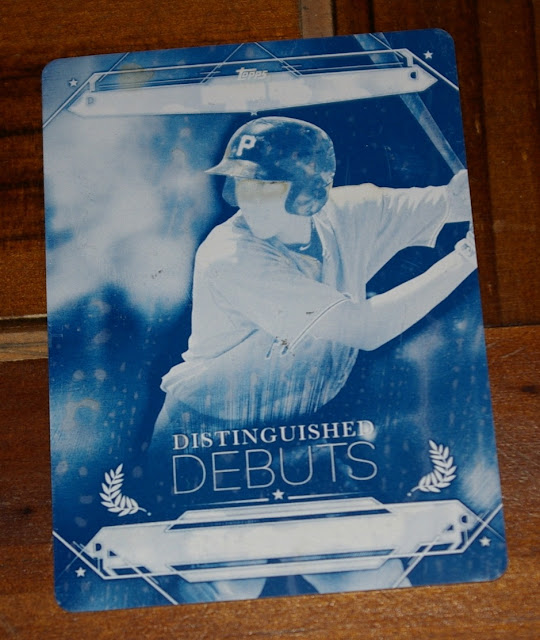 Sweet cyan printing plate! These Distinguished Debuts plates are seeded 1:1884, making it somewhat of a case hit. Cole Tucker is touted as Pittsburgh's shortstop of the future. At only 19, he's probably still got a few years to develop, but he's off to a fine start, batting .293 with 25 stolen bases last season in A ball.

My non-PC Pirates typically walk the Bob Walk plank, and chances are Cyan Cole here will meet the same fate, but for now I'm just going to enjoy it and nuzzle it to my bosom. It's nice to start replenishing my Pirate stash after recently cleaning it out on Matt after he won my recent contest. If you missed his posts showing off the booty, check them out here (the Bob Walk customs I made) and here (the rest). 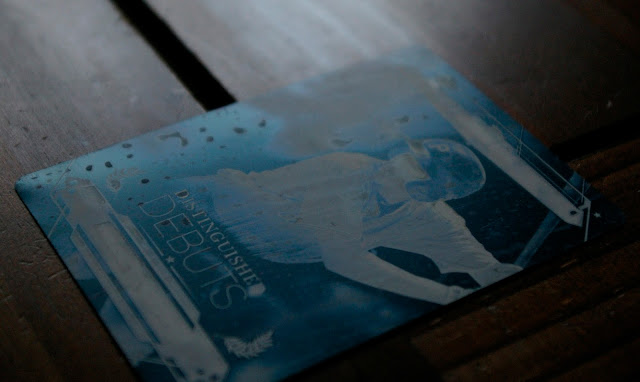 Usually you want your cards to come out of packs nice and pristine, but I think printing plates are an exception. They're much cooler when they're beaten up with signs of wear.. it really makes it clear the plate saw a lot of action in the card-making process. Kind of like how it's cool to pull a dirty jersey relic. So yeah, I was stoked to see this plate come out of the pack with lots of stains, scratches, and splotches on it. Very cool.

That's it for this break. Thanks for reading!
Posted by defgav at 4:00 PM