Back when I was in my long hiatus from card collecting, my "collecting fix" came by way of music. I had a pretty sizable collection of tapes and CDs as a teenager, and once mp3s became all the rage, my collection exploded exponentially. Never one to be content with whatever hit songs the radio or MTV fed me, I was always searching out obscure stuff, trying to find that unknown perfect song hidden in the gutter. That's not to say I totally ignored pop music, though, as I was definitely a fan of many big names.

A quick aside, my handle "defgav" comes from back around 6th grade when my best friend Doug and I liked to pretend we were a hip-hop act. He was MC Doolay and I was DJ Def Gav. It derived from the fact that my favorite rock band back then was Def Leppard. Plus we were also into mainstream rap of the time like MC Hammer, Tone Loc, and Rob Base & DJ E-Z Rock. "Def" was a slang word for cool that those guys used a lot, like in Def Jam. And of course the Gav part comes from my name being Gavin. Flash-forward to many years later when one day I'm trying to think up a username to use on a message board or something. I wanted something short and that wasn't likely to be used already elsewhere on the web (so I'd hopefully never again have to spend time trying to think up a username). Boom, with a sentimental throwback to my imaginary DJ days, defgav was born anew. I've since used that for my username countless times when creating accounts online at various sites.

So that's the story behind the name defgav in case you were curious.

Back to music, in high school I got really into the band Jane's Addiction. My "collecting gene" was activated in full force, and I spent much of my free time tracking down live and rare recordings from the band and their side-projects. In cardboard terms, I was a Jane's Addiction supercollector, with nearly all their "oddballs" and "parallels" and even some very rare "one-of-one" items. (For the record: While I still dig the old stuff, I think the current incarnation of Jane's is a joke. Lead singer Perry Farrell's wife is a horrible person [seriously, follow her on Twitter or Facebook and just try to resist the urge to slap her] and has sadly steered him into mediocrity.)

But like with my card collecting, I had "PCs" of lots of different artists. A couple other bands I collected pretty heavily were Neutral Milk Hotel and Rilo Kiley. Oh, and I was a big Frank Black/Pixies fan. I suppose I still am. Weezer, Red Hot Chili Peppers, Smashing Pumpkins, and Pavement are some more popular bands I've got days of recordings from in my collection. Local favorites Rocket From The Crypt are another band I was a pretty hardcore fan of. I also collected some relatively obscure bands like Three Mile Pilot, Paw, Toadies, dig, Mercury Rev, John Frusciante, Hum, and Hopewell.

I did a lot of trading live recordings ("bootlegs") back in the late 90s and early 00s, first swapping cassette and VHS tapes with other traders, then moving up to CD-R and DVD-R once that technology caught on. It wasn't all that different from my card trading these days, with a few frequent trading partners, and the occasional one-off deal. Like today, I'd end up with something and be like, "So-and-so would really love this!" or see something on somebody's list and be like, "Ooh, I need that one!"

My live music collecting eventually mellowed out. I'll still pick up a show here and there, but nowadays it's all digital, rarely getting anything on disc anymore. I'm an active member on a private mp3 site, and I get most of my music from there. Every year or two, I generate an updated list of my music collection and share it with my ol' buddy, the aforementioned MC Doolay, and let him go nuts requesting stuff to be hooked up with, and give it to him for Christmas or whatever. Plus it's handy for me to have a current list so I can refer to it and hopefully avoid downloading stuff I already have. (Again, it's not that different from card collecting.)

At 5000+ albums, I think it's safe to say I've got something for everyone. My taste leans towards indie/alternative rock, but I've also got a good helping of classic rock, pop, metal, rap, classical, even a little country. (I don't much like country music.) Feel free to peruse the list if you're really bored.

How is all this relevant to a baseball card blog? Well, back during my collecting hiatus, I still had a very casual interest in cards, and would mention on my music wantlist that I would consider trade offers for sportcards among other "barter" things I might be interested in, for guys who didn't have any recordings I wanted. Over the years, I got a handful of card packages this way, trading for music. The most notable card I can think of was a John Elway RC (sweet card, though unfortunately this copy had a "fish eye" printing flaw right between John's eyes that really hurts the card's eye appeal.) So even though I wasn't actively collecting cards, I still brought in a few cards here and there through such trades.

It had been years since I traded music for cards, but recently, a guy found my old, neglected bootlist and wanted to get me something off Amazon in exchange for a live Jane's DVD I have. Sounded good to me, but my Amazon wishlist didn't have many interesting items around the fair price range. So what did I do but of course load up my wishlist with unopened baseball card products! Amazon is rarely a good source for cards, with prices typically around 20% more than what you can easily find elsewhere online. But it's doable if you have a giftcard to burn and can finagle free shipping. It's also nice to have a wantlist there, because then people can buy stuff and have it sent directly to you if they choose.

I decided to ask the guy for a blaster of 2015 Topps Update in exchange for the DVD. While there were hobby boxes of many other products I was more interested in, I didn't want to push the guy's generosity, so I kept my request to a blaster. While I stated a while back that my interest in 2015 Update was mainly the Pride & Perseverance insert set which I already picked up for $5, I figured I'd take a chance on a blaster and hope for a cool parallel or something. (By the way, if you're interested, feel free to take a look at my Amazon wishlist.) 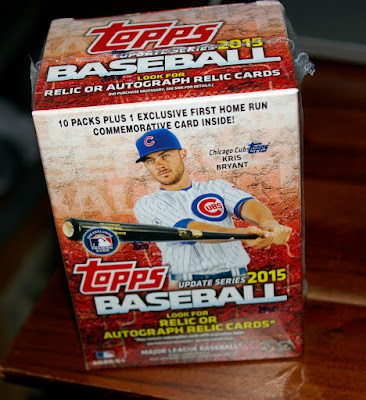 As I draft up this post, I haven't ripped the blaster yet, so let's do it "live" now... 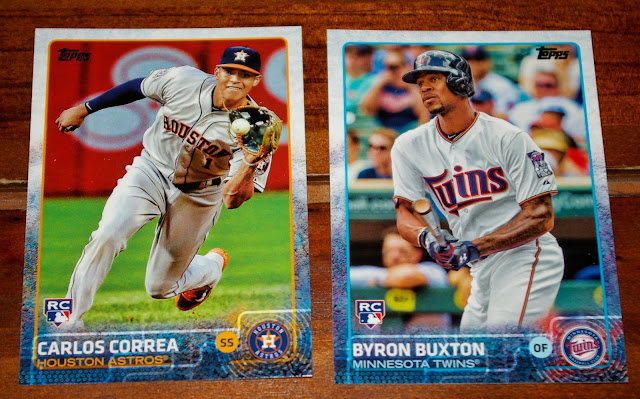 I got shutout with coverboy Kris Bryant, but I did land a couple of the other big RCs in the set, Carlos Correa and Byron Buxton. Alliteration. 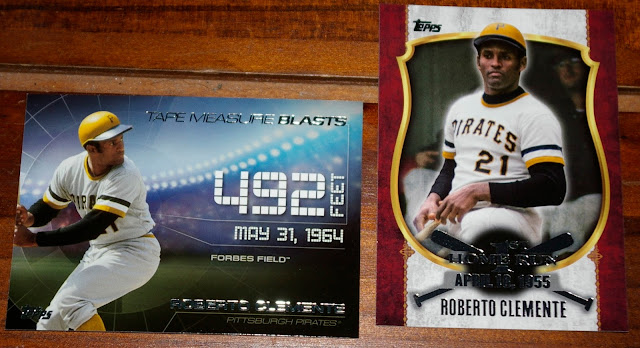 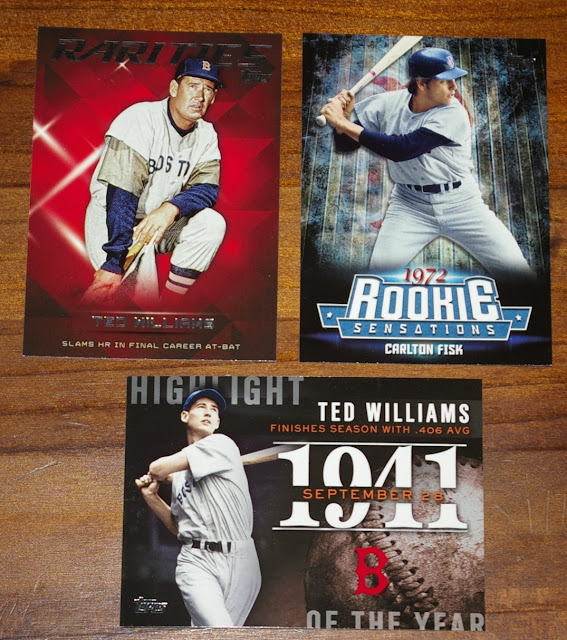 Red Sox legends are well represented with a couple Ted Williams inserts and a Fisk. 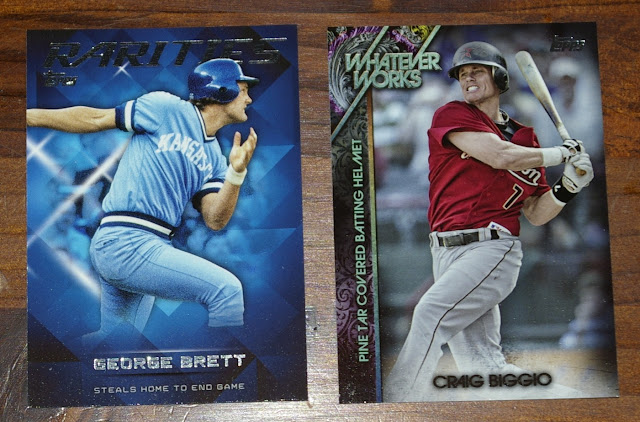 These are a couple cool inserts.

The Todd Frazier Home Run Derby card was my only rainbow foil parallel. Plus a couple gold /2015 parallels. 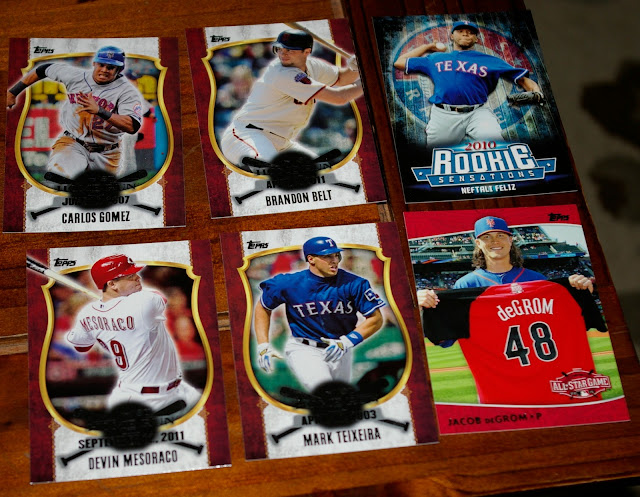 Here are some more inserts. These are available for trade. 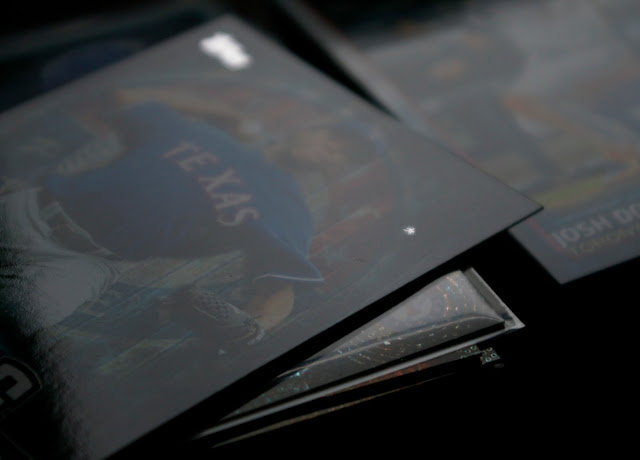 I noticed the Feliz Rookie Sensation insert has a little foil "star" on the right side. It's probably just a little printing flaw, but I'd like to believe it's a SSP sparkle variation or someshit. 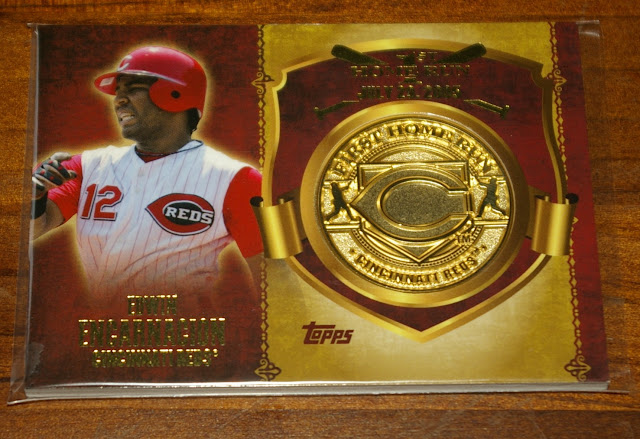 My promised medallion was Edwin Encarnacion, unfortunately not a player I collect. Up for trade, if you want it. 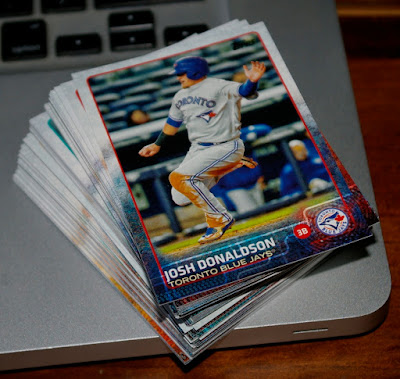 I'm not trying to build the set, so if you are, please let me thin out some of this stack on you in a trade.

So that was the blaster. Not amazing, but totally worth copying a live DVD and mailing it out. Thanks, Frank, if you happen to stumble upon this post.

But this post has a bit of a twist! Between drafting up the rambling first part of this post and ripping the blaster a day or two later, I actually got myself some other 2015 Update. I was really enchanted with what I saw of the Chrome cards available in retail-only "holiday mega boxes" so I made a trip to Target on Saturday morning on a quest to find some. 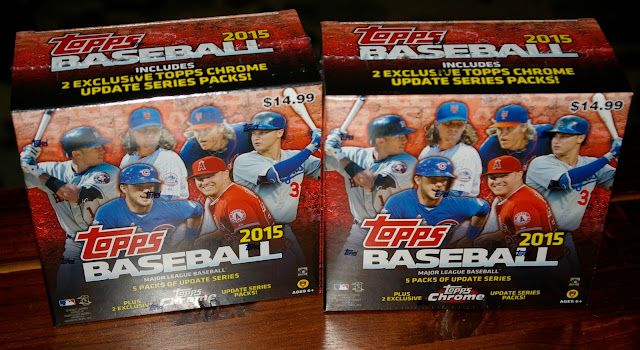 They were in fact in stock and I grabbed a couple. I took a look at the clothes on the clearance rack, but nothing grabbed me and so the cards were the entirety of my purchase. 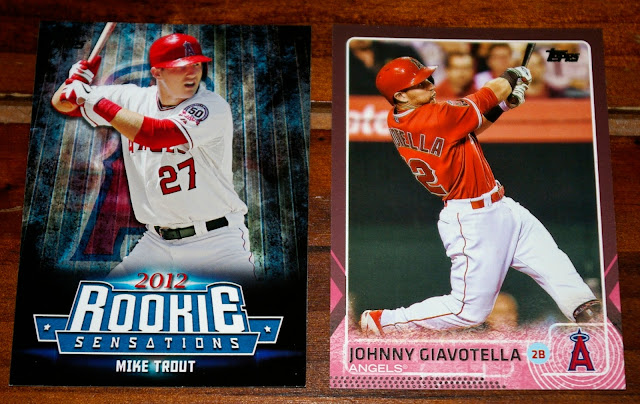 The first box had some Angels love with a nice Trout insert and a /50 Johnny Giavotella. You don't see many mauve cards these days. Wish it would have been a more desirable player, but them's the breaks. 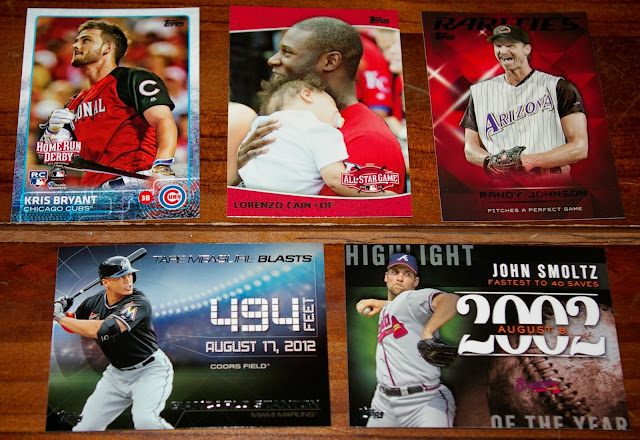 Finally landed a Bryant, even if it's probably the least desirable of his several cards in this set.

And now for the headliner...

These Chrome cards did not disappoint in-hand. Kudos to Topps for making them all like this, and not a parallel where you're lucky to get just one or two in a box. I was happy to pull the Ted Williams (though the sparkly effect is a bit more subdued on these inserts), and a few decent RCs too. 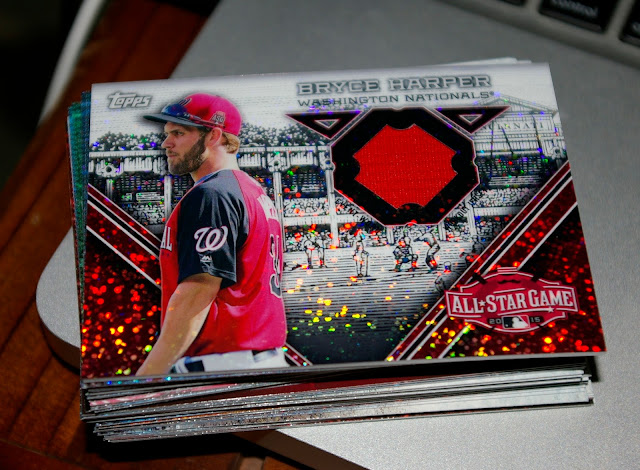 Sweet! My first ever Bryce Harper relic, and it's a nice one, with a bold red swatch from his All-Star Game workout jersey, and the rainbowy sparkles really making the card come alive. As somewhat of a "No Hit Wonder" with busting cards, this may be one of my better pulls ever.

Onto the 2nd holiday mega box... 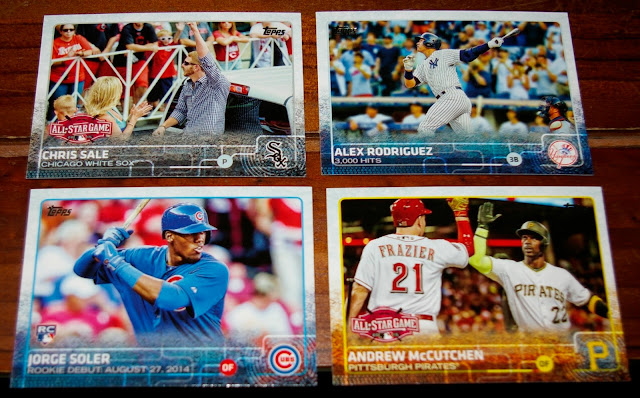 Some horizontal highlights from the base. 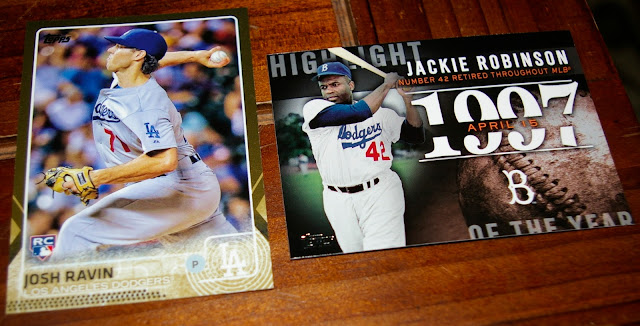 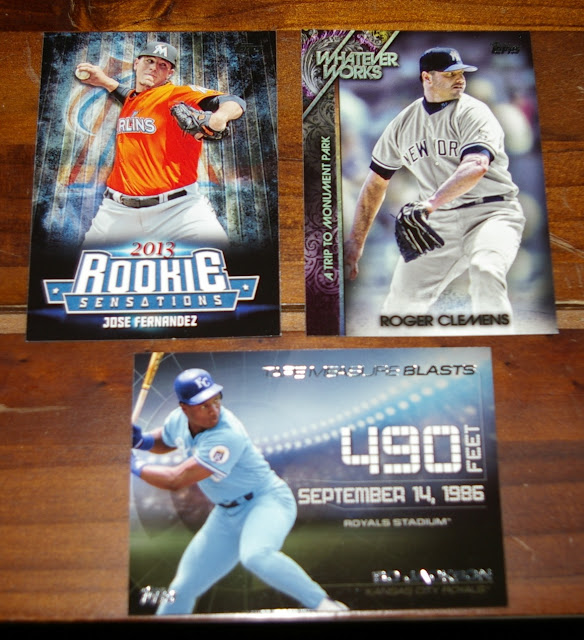 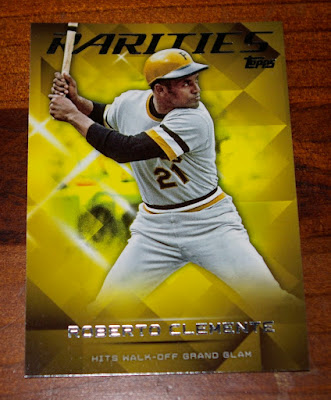 Maybe my favorite card of this break besides the Bryce relic, this Clemente looks incredible and tells the story of the only time in MLB history a player hit a walk-off inside-the-park grand slam. I hadn't heard that before, as if I could hold more awe for the guy.

The Chrome cards in the 2nd box couldn't compete with the Harper relic of the other box, but still some good stuff. The Kemp might be my favorite, but I was also happy to pull the Gallo.

So that wraps up my adventure with 2015 Update. I doubt I'll pick up any more, unless maybe the mega boxes find their way into the card section of my local grocery store (none there yesterday), in which case I may pick up another one. But as I said, I'm not looking to complete the set, just trying to land some decent cards of guys I collect. So again, please feel free to ask about shaking out a trade if anything caught your eye or you need base cards from this set.

Thanks for reading!
Posted by defgav at 12:26 PM