The Man, The Myth, The Rod Beck Collection 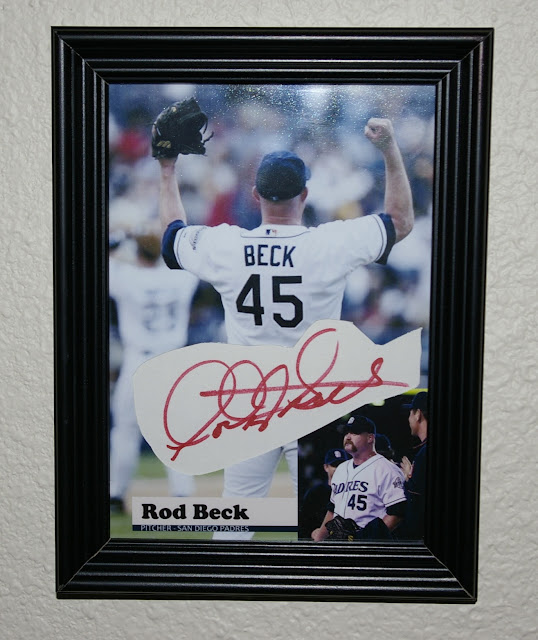 I love Rod Beck. One of those "like to have a beer with" type of dudes, and in fact he was known for hanging out with fans doing just that. He also was enthusiastic about working with childhood AIDS charities. This real-life inspiration for Kenny Powers was a big guy and a big personality who sadly succumbed to his demons.

I try to keep my collecting habit to cards-only, but I made an exception for this custom 5x7 that I made recently using a couple photos of victorious moments from his time on the Padres, with a window cut out for an autographed index card I got for a few bucks on eBay. I've got it hung up in my cardroom as a reminder to 1) Be excellent to each other, and 2) Stay away from the hard stuff. Good rules to live by.

Rod began his pro career in the late 80s and played into the mid 00s, so he's got a ton of cards out there, mostly "commons" that aren't expensive but still somewhat overwhelming in number. Luckily for me, I'm not trying to get them all; my goal is just 100 different cards. I don't think I'm quite there yet, but let's take a look. 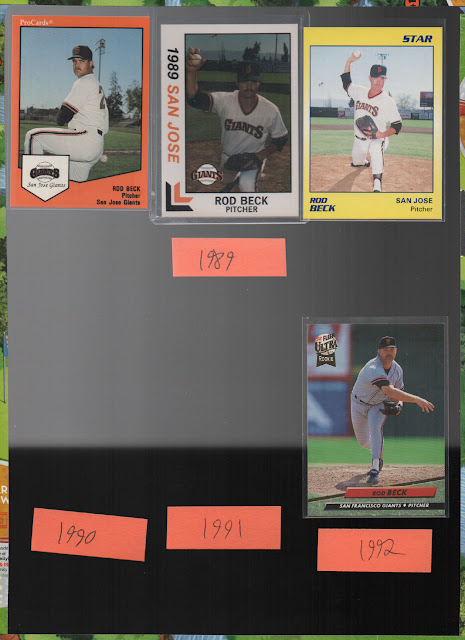 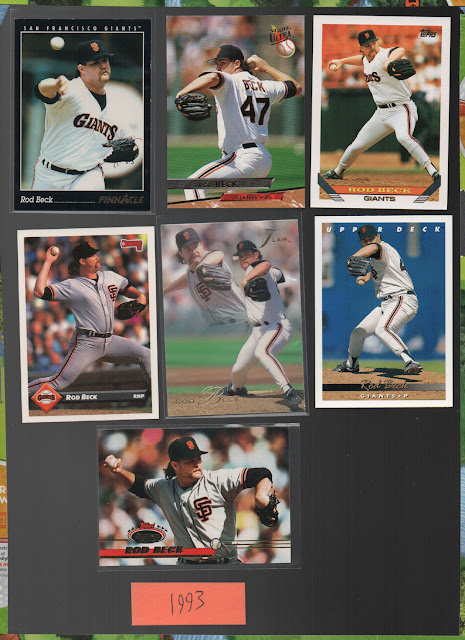 Shooter really broke out onto the cardboard scene in 1993. Upper Deck is the star of the show here, with even a basic pitching shot looking great on '93 UD. 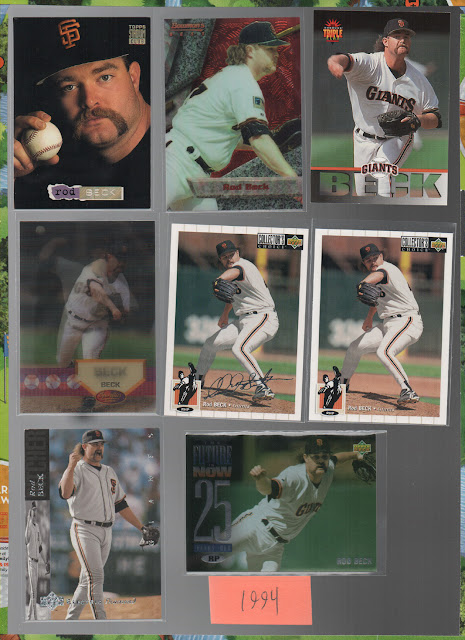 Looking good in 1994. Some neat parallels here including a Stadium Club rainbow foil (or whatever they called it), a Silver Signature Collector's Choice, and an Electric Diamond Upper Deck. 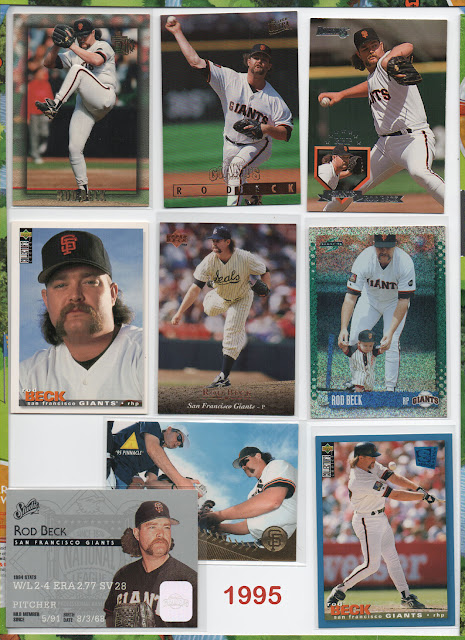 1995 crams the scanner, highlighted by a sweet Seals throwback in the middle, with a sparkly Score parallel beside it. A trio of great cards lines the bottom, including a credit card looking thing, an autograph-signing photo, and a rare closer at the plate shot from Collector's Choice. 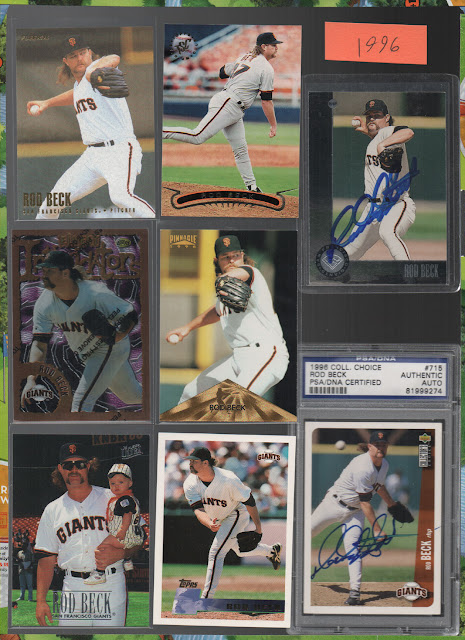 1996 features my only two autographed Rod Beck cards, one of which is slabbed authentic (I don't believe Rod ever had any pack-certified autos put out, so this is as close as you can get). The Fleer Ultra card with him holding a baby is a classic. 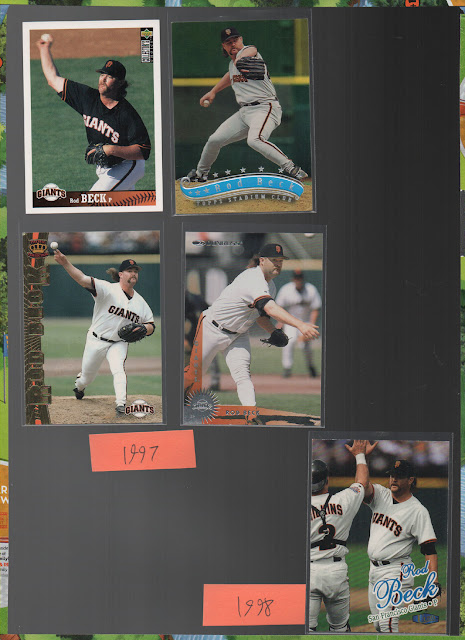 Here we've got a few '97 cards, and one of Rod's last appearance on a Giants card. 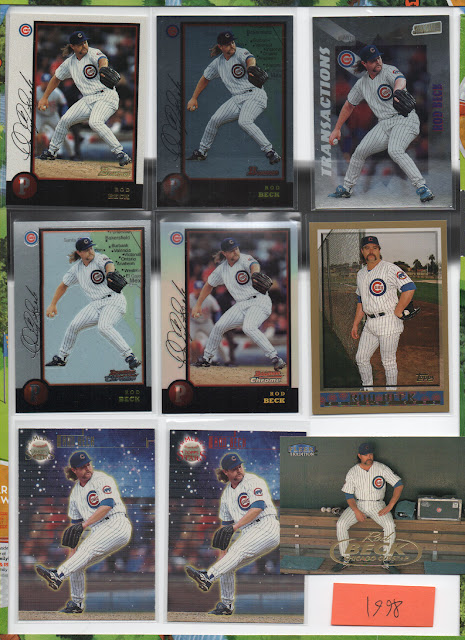 1998 saw Beck slinging it for the Cubbies. As you can see, the parallels are in full force in this scan. 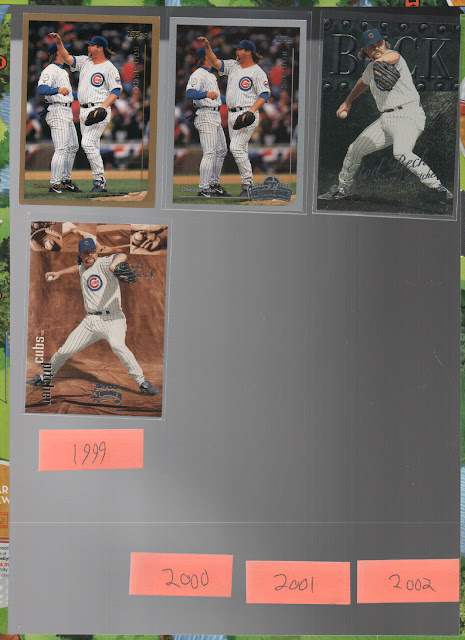 After a few more Cubs cards in 1999, my Beck-lection goes dark. No cards from 2000 through 2002. I hadn't realized I don't have any cards from his stint on the Red Sox! I'll need to rectify that soon. 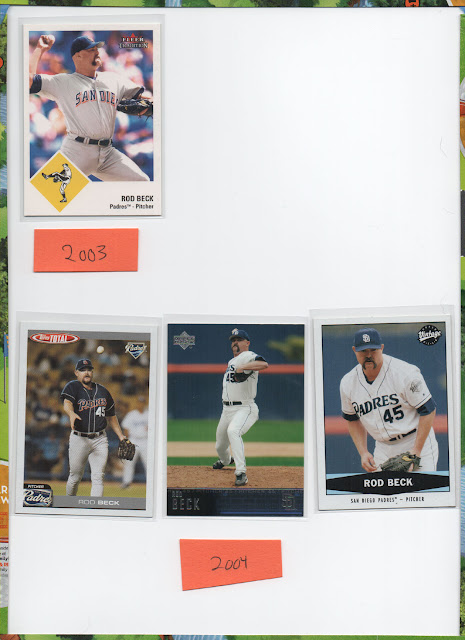 Here's the final scan, and as a Padres fan, it'd say it's the best of the bunch. Filling in for an injured Trevor Hoffman, Shooter was a bright spot on a last-place San Diego team in 2003, saving 20 games (for a team that only won 64) with a 1.78 ERA. This is even more impressive considering he sat out all of 2002 recovering from Tommy John surgery. His numbers weren't nearly as good in 2004, and he was released near the end of the season and called it a career.

Rod died in 2007 after a few years of sinking into a crack addiction that had earlier cost him his marriage. Through it all, the couple remained close, living in houses just a few miles apart and sharing holidays and custody of their two daughters. Since I'm posting this on Thanksgiving, I feel I should tie this into being thankful for your loved ones and all that. So yeah, take a moment to be thankful that/if neither you nor your immediate family are drug addicts.


Anyways, that's 58 cards by my count. Geez, barely halfway to a hundred. Oh well, I look forward to adding more Rod Beck cards to my collection. Perhaps a Rod-focused Just Commons order is in my future, with specific interest in his later years (Cubs, Red Sox, Padres). Doing posts like this is helpful for me to sort out my collection and see what I have/need. If you have any Rod Beck cards not pictured here to send to a loving home, get in touch.

Thanks and Happy Thanksgiving!
Posted by defgav at 12:49 PM