Listia's got me shaking my head again 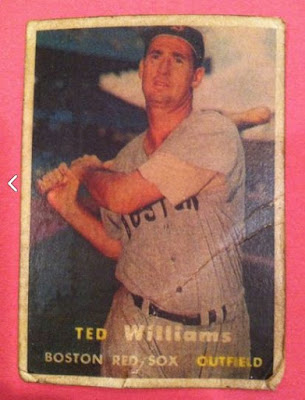 Gah, Listia these days, am I right? I've been pretty quiet on there recently. The inflation on credits has skyrocketed, yet as a seller, 499 is still the maximum opening bid without being penalized. So it's basically "feast or famine" on there now, with everything either selling for thousands of credits, or barely any at all.

The only thing I've won in the past two months was a 3-card lot for 100 credits.. which would convert to like 2¢ or so in money. What transpired was amusing enough to where I thought I'd get a post out of it. (And later I'll get to the '57 Ted Williams above.)

I'm no grammar Nazi, but this punctuation-challenged message gave me a chuckle. I wonder if she talks like William Shatner in person. 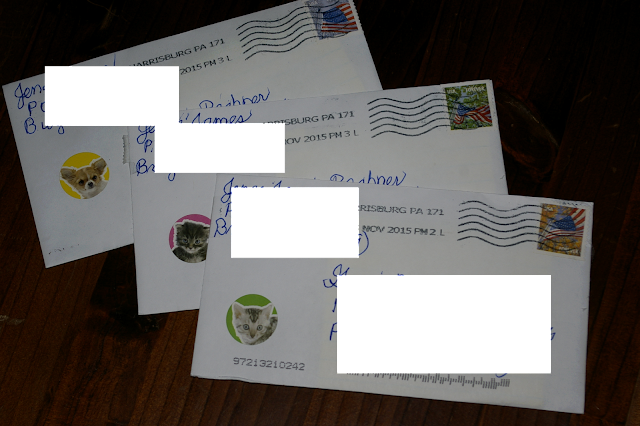 The cards showed up a few days later, each one in a separate envelope. Let me remind you it was one auction that included 3 cards, and I won it for the opening bid of 100 credits (2¢ or so) and free shipping. I felt bad for the lady spending nearly 2 bucks on postage, envelopes, and cute kitten stickers. But hey, if that's what she wants to do, so be it. She has nice penmanship (though I'm not sure why she felt the need to put the zip codes in parenthesis). 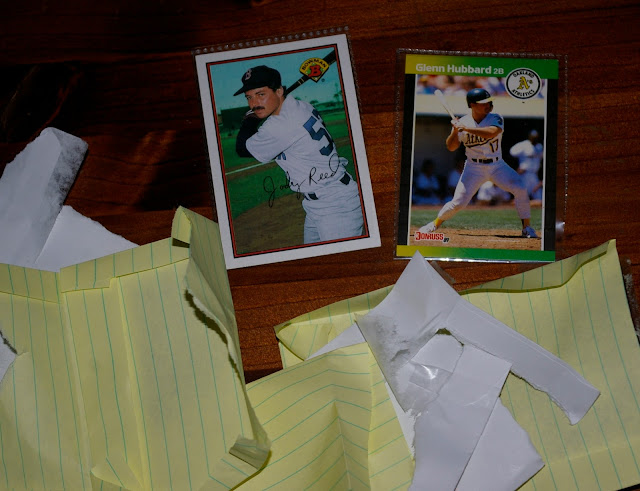 The cards arrived safely in sleeves apparently made from cut 9-pocket pages, wrapped in a piece of yellow paper. Perhaps a piece of cardboard would have been nice to help prevent bending, but otherwise I don't have much complaints about packaging. A lot of times getting cards from Listia from a lady seller will result in the card being tossed loose into an envelope. (Sorry if that sounded sexist; plenty of guys are bad at shipping cards too, but the ratio seems to be greater with females, as the majority of them aren't very familiar with the hobby.) 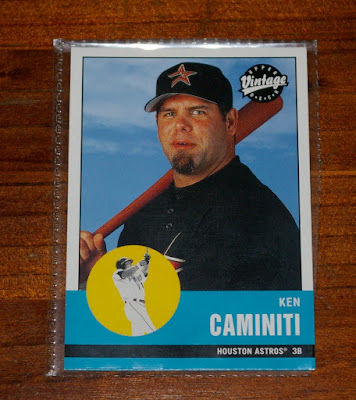 I didn't care about the Jody Reed or Glenn Hubbard cards; this Ken Caminiti UD Vintage was my sole interest in the lot. I very well may already have this one, I didn't bother to check. But for just 100 credits, who cares? Hopefully I needed it, though. I'll have to sort my Cammy PC one of these days and find out.


Changing gears now, there's a guy on Listia lately who has been selling a ton of homemade counterfeits-- OH, EXCUSE ME, I MEAN "REPRINTS." 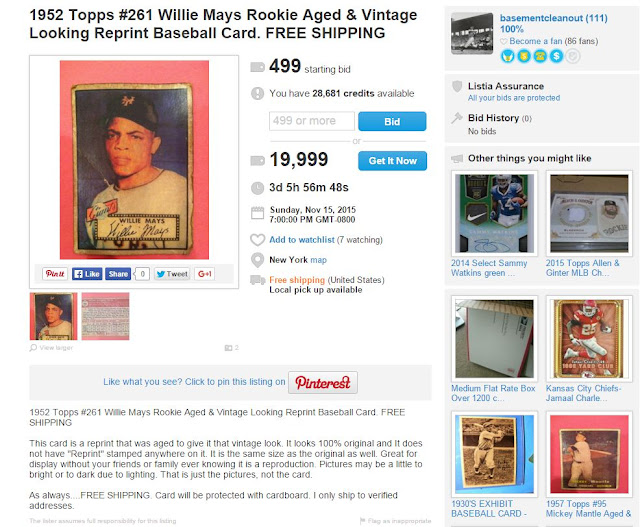 "It looks 100% original and It does not have 'Reprint' stamped anywhere on it."
Um, that's what's known as a counterfeit, asshole.

Look, I like making my own cards, too, and have even attempted (without much success) to make a buck off them, but I definitely disagree with making counterfeits. Even if I made a "reprint" of a card, I'd be sure to at least make a notation somewhere on the back distinguishing it from an authentic specimen. Shit like this is damaging to the hobby. I know he makes it clear in his auctions that it's a reprint, but what's to stop the person who wins it from turning around and trying to resell it without mentioning it's a fake? If they get busted they can plead ignorance, but maybe they'll get lucky and find a sap who gets fooled. Or maybe it wouldn't even be malicious, but like.. down the road, the guy who buys the card dies and his family sells the card under the impression it's legit? It's just a bad idea all around to make counterfeits, polluting the marketplace with fakes.

This guy makes a ton of counterfeits from all years and sports, which he likes to proclaim as "Stunning & Mint" in the item's title for the modern cards he copies. He gets cute artificially aging his vintage counterfeits, like the Williams and Mays above, sometimes overdone to a comical degree.

But yeah, I really have a problem with people doing this shit. I've rambled here in the past about how homemade cards will be the death of the hobby, and my fear definitely hasn't lessened. It's tempting to try reporting this guy or try reasoning with him or something so he'd hopefully knock it off. But that's probably futile so I'll instead just block him.. out of sight, out of mind. I'm sure stuff like this is on eBay too, it's just easier to stumble upon in the smaller pond that is Listia.

Anyways, that's it for today. Thanks for stopping by. What are your thoughts on all this?
Posted by defgav at 3:48 PM