It's gotta be hard living in the shadow of your famous dad, brother, or uncle if you're a ballplayer. On one hand, you've got an invaluable mentor right there. And if you've got a last name that's respected in the game, you might get a longer look from scouts than you would otherwise thanks to your lineage. But once you get signed, the pressure is on you to live up to your name. And the odds are pretty overwhelming that you won't end up the most successful athlete in your family.

I'm always a little fascinated when pulling cards of lesser-known kin (usually from Bowman), so it was about time I made it an official collecting pursuit. I figured I'd keep with my Hundred Card Club method of collecting and set the longterm goal at 100 different players to "complete" this minicollection. I'm really just looking for 1 card from each player.. I won't be PCing all these guys.. just one card each.

My requirements to be included in the Black Sheep minicollection:

So we're not talking about Ken Griffey, Jr.. we're talking about Craig Griffey.
Even guys like Chris Gwynn and Tony Gwynn, Jr aren't included. Sure, their careers can't come close to Tony Sr, but they were still able to put together decent major league careers, seeing plenty of action in several different seasons.

This will be a recurring series on the blog, with each post covering a handful of players.
All right, here we go! 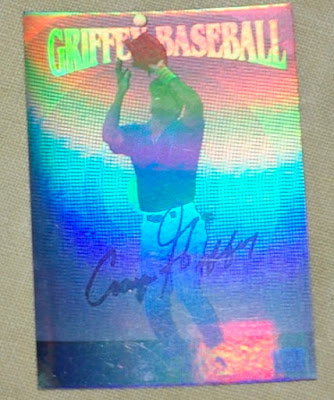 Let's begin with the aforementioned Craig Griffey, perhaps the least accomplished athlete to ever get a hologram sportscards of his own. He's a double-whammy for the Black Sheep minicollection, as not only was his dad an excellent baseball player, his big brother Ken, Jr. was perhaps the biggest star in the game during the 90s and into the 00s.

To his credit, Craig played football at Ohio State, so he was no slouch, but baseball was just an afterthought. Seattle took him as a 42nd round pick of the 1991 draft, ostensibly as a favor to the family. Craig played in the Mariners minor league system for a few years and appeared with his brother in the outfield during some Cactus League games. The highest level he reached was a brief 3-game stint in AAA with the Tacoma Rainiers. Overall he hit .224 with good speed and not much power. I'll bet a few of his 11 career MiLB home runs were inside-the-park jobs, as he also had 18 career triples. He retired after the 1997 season, which happened to be the year his brother won the AL MVP award. I couldn't find much additional info on Craig Griffey, though here's a bizarre article which I'm pretty sure someone just made up. 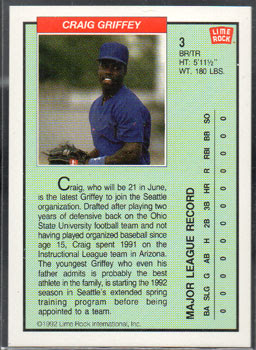 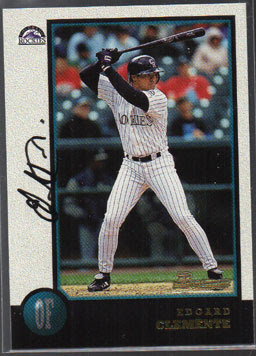 Edgard Clemente did his best to keep the legacy of his uncle Roberto Clemente alive on the diamond. I'll admit he's the reason my max MLB games limit for this minicollection is 162 instead of 100 (Edgard played in 114 games). His professional career stretched a whopping 21 seasons, originally drafted by the Colorado Rockies in the 10th round of the 1993 MLB June Amateur Draft out of Puerto Rico. In his first taste of major league action, he batted a sharp .353 as a September call-up in 1998. He was back down to earth in 1999, but hit a respectable .253 with 8 home runs.

He was traded to the Angels in 2000, but hit just .218 in 46 games in what would be the end of this major league career. As an outfielder, he just didn't hit enough to stick around, plus he was slow, without a single stolen base to his credit. He bounced around in AAA with Boston and Milwaukee for the next couple years, then saw the next decade playing in Independent and Foreign leagues, not hanging them up until after 2013. All told, he racked up 1841 professional hits, which isn't too shabby, but a far cry from the legendary Roberto Clemente. 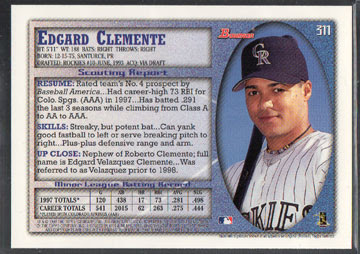 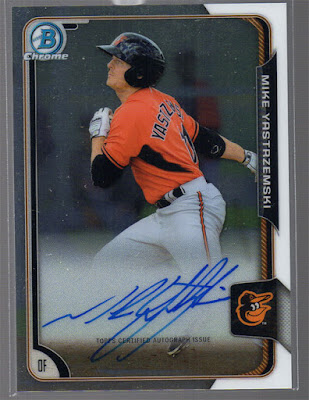 The grandson of Carl, Mike Yastrzemski is still active, so he's got a shot to make it out of this minicollection at some point. He was drafted by the Orioles in the 14th round of the 2013 draft from Vanderbilt, after earlier being drafted but not signing with the Red Sox and Mariners. He had a nice 2014 season displaying good pop and speed, but his numbers dipped in 2015, hitting .246 in AA with single-digit totals for HR and SB. It'll be interesting to see if he continues to progress and we eventually see another Yaz in the bigs.

It's worth noting that Mike's dad, Carl Michael Yastrzemski Jr, also went by the name Mike and played in the minors in the 80s with the Braves and White Sox organizations, so he'd fit into this minicollection too if I rounded up one of his cards. 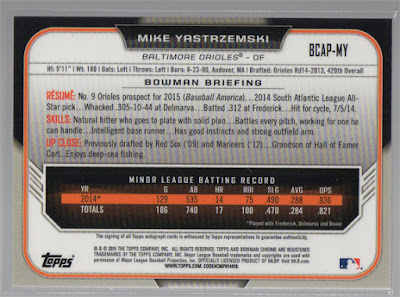 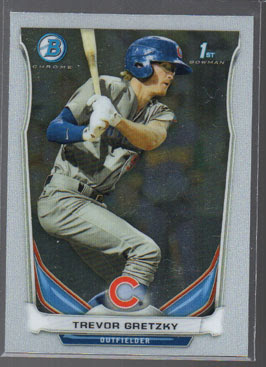 We're crossing sports with this one. Trevor Gretzky is the son of Wayne Gretzky, the leading scorer in NHL history. Trevor signed a letter of intent in 2010 to play baseball for San Diego State University, but decided to turn pro after he was drafted by the Chicago Cubs in the 2011 MLB draft; his $375,000 signing bonus was negotiated by then-Cubs GM Jim Hendry and Wayne himself.

Trevor was traded to the Angels on March 20, 2014 for another guy who could fit in this minicollection: Matthew Scioscia, son of Mike Scioscia. Trevor played in A-ball during 2015, hitting .242 with a couple dingers. So it doesn't look like we'll be calling him "The Great One" of baseball, but he's still young and could potentially make the majors someday. 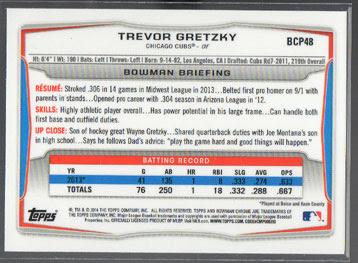 That's it for today. What do you guys think of this series? Well, love it or hate it, I'll be back with some more cards of lesser-known relatives of star athletes soon.
Posted by defgav at 3:56 PM