Bunting for a hit

The latest hardcopy customs I've whipped up aren't exactly customs of my own creation, rather I printed out a few cool Bunt digital cards I liked. That's right: Fake cards of fake cards!

I'm among those who scoffs at seriously collecting digital cards like with Bunt. But truth be told, I don't own a smartphone, so I've never actually used the app. Maybe once I eventually get a smartphone, I'll give it a shot. Some of the cards they come up with look pretty good. But I think it's crazy when people pay hundreds of dollars for a jpg of a baseball card. I mean, dude, just save a copy of it on your hard drive for free! But if Topps can find people into that sorta thing, God bless 'em. 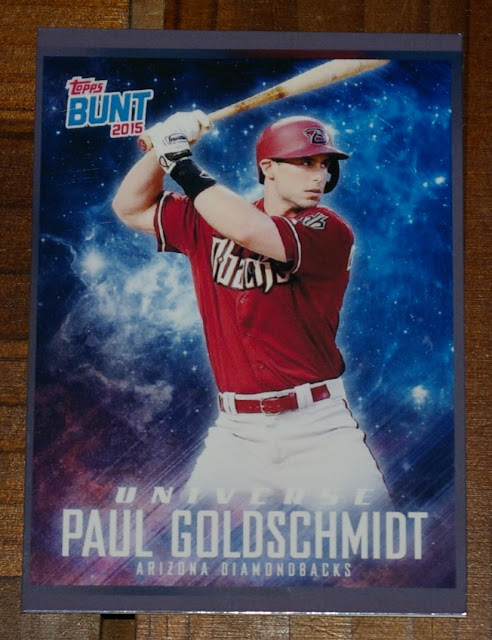 This Paul Goldschmidt insert card is basically a common. You can easily find it on eBay for like 99¢ and free shipping (ha, can you imagine being charged shipping for a digital item?!) But I thought it was a cool looking card, and Goldy is one of my favorite active guys to collect, so I figured add this one to my PC. The question for me is do I include this in my official count. Probably won't be considered a true card, rather one for the "other" column like a bobblehead or a Starting Lineup figurine (if I were to actually keep records on my collection, which I do not.)
(UPDATE: Turns out there do exist real copies of this insert as tough pulls in 2015 Update. Oh well. This is a fine placeholder until/if I end up with a real one.) 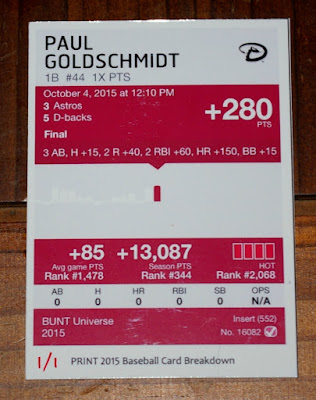 I used the real back, too, though these stats and points don't mean anything to me. I just added the part at the very bottom. I can't quite call this a "reprint," so I called it a "print." Gave it a nice 1/1 hand-numbering for kicks. 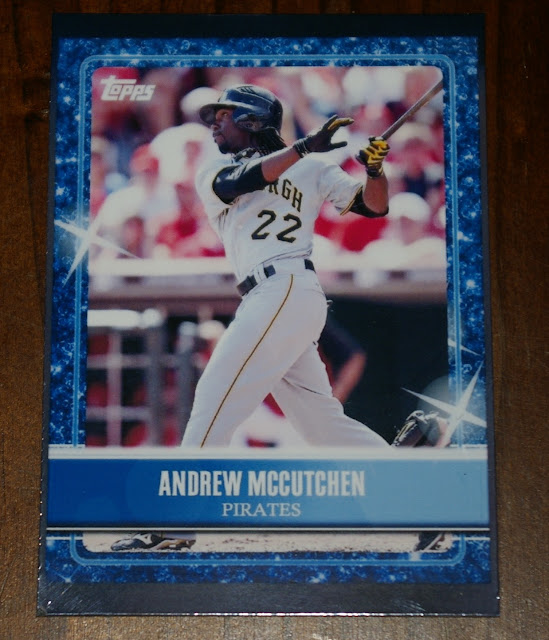 Now, this Andrew McCutchen digital card actually sold for $227.50. My net cost to create this physical representation was considerably less, it goes without saying.

Props to the designer for a sharp looking card. One thing I discovered during this project is that Bunt cards are a bit stubbier than real cards, so I had to add some space at the tops and bottoms of each card in order to get the standard real-world card dimensions of 2.5" x 3.5". 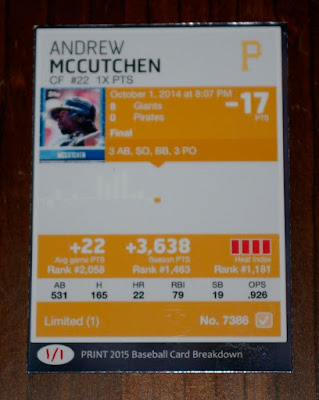 I think this digital card was a 1/1, so I guess it's fitting mine is also a 1/1. If I were ever inclined to make more copies of this card, well, I could take a page from card companies and play the parallel game: I could leave future printings unnumbered, or perhaps hand-number them with a different color ink, which would then make this the "red ink parallel" 1/1. 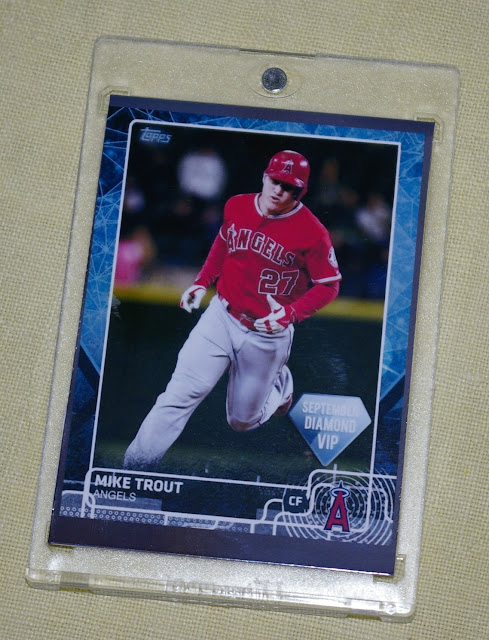 This Mike Trout "Diamond VIP" digital insert also sold in the hundreds on eBay. I didn't do a perfect job with cutting my custom version here, but it's good enough for me. It ain't like I'm sending these to PSA to get graded; just a "for fun" item to throw into my collection.

From looking at these 3 cards I've selected, it's apparent that I'm drawn to cards with lots of blue in the design, with an astronomy theme to it. What can I say, I've always been a fan of looking up into the clear night sky. 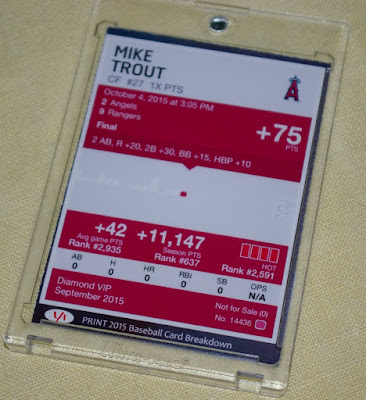 Another 1/1 red ink parallel.. the only one in the world! LOL

So there you have it. If any of you guys really want one for yourself, I could crank out "parallels" to trade, so let me know. But I don't think I'd be brazen enough to try to sell these on eBay. I imagine Topps would not take kindly to that. Then again, counterfeits are rampant out there, as I talked about the other day, without Topps seeming to take any action against it. Basically, seems as long as you're not getting unlicensed cards onto Walmart shelves, it's not a big enough deal for Topps or MLB to worry about. Still, though, I don't want to tempt fate stepping on toes.. so I'll keep these in the narrow confines of my collection, and possibly a small handful of interested trading buddies.

So in conclusion, it's nice to be able to take digital cards that catch my eye and turn them into tangible cards to add to my collection. I don't plan to go nuts with these going forward, but if I stumble upon a cool digital card of a guy I like, I'll probably save it to my computer, and if I really like it, I'll make it into a custom card to file away in the respective PC. They're not perfect, but they almost look and feel real.