Once again, it's time to take step back in time to my childhood.

Here's my school pencil box from circa 2nd Grade... 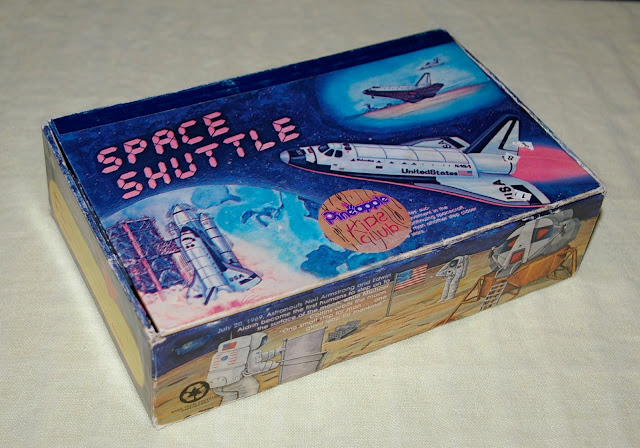 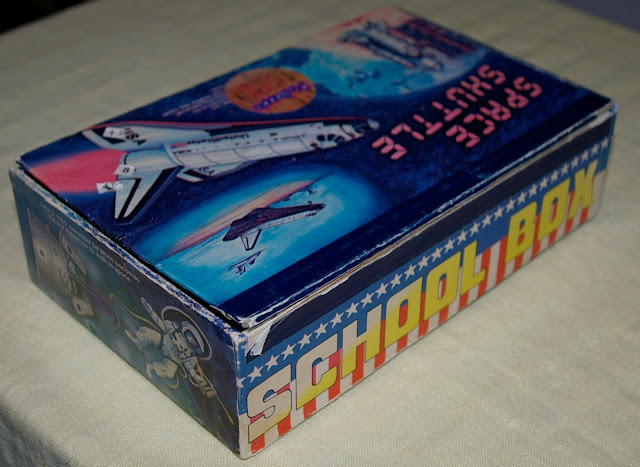 Saw action in 1986 or 1987, probably. It currently stores a bunch of various crap from my youth. This treasure trove could probably keep me stocked on material for Sentimental Sundays posts through 2016 if I really stretched it! 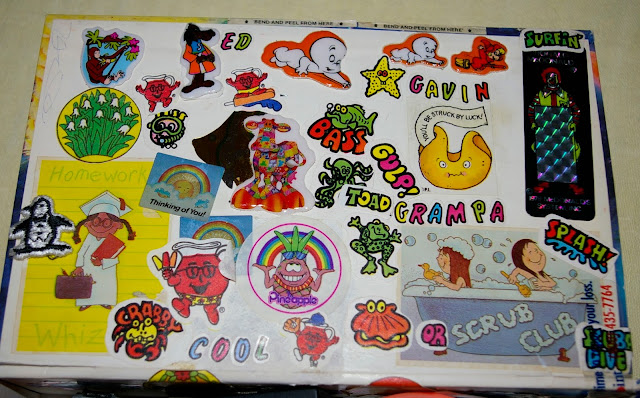 Here's the inside of the lid. Lots of neat stickers: puffy Casper, "manufactured patch" penguin in a tux, scratch-n-sniff lilacs (?), Kool-Aid Man, etc.

Ed (up by puffy Hong Kong Phooey) is a popular name in my family, with 4 generations of Eds. If I ever had a son, I'd be tempted to make him Ed the Fifth to keep the line going, though I'm not an Ed so I'm not sure that's legal. I don't think my Cousin Eddie (The 4th) is going to sire children at this point, as he's pushing 50. At least he's out of prison and apparently doing fine now, though I haven't seen him in over a decade. 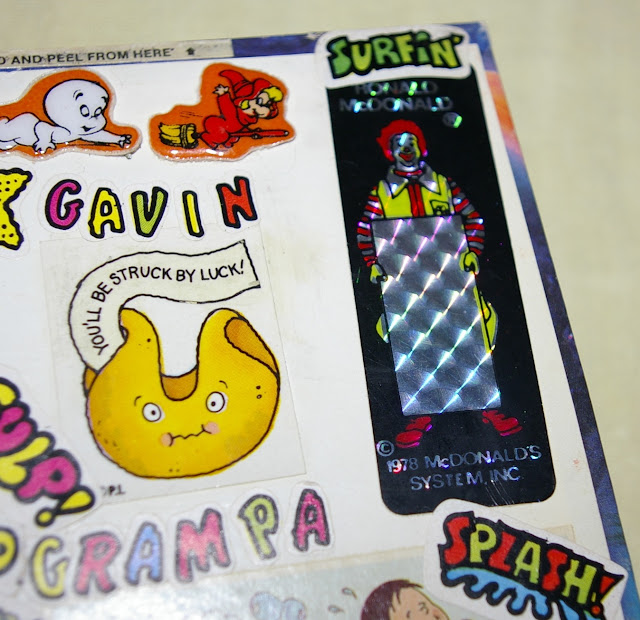 Check out that Ronald McDonald sticker (© 1978) where he's happily holding up a shiny refractor 2x4. It's the same "spinning wheels" effect that is the basis for superfractors, though without the gold tint. I thought it was funny to realize that whole thing was showing up as a free Kids Meal toy twenty years before superfractor cards were a thing. We were promised jetpacks. 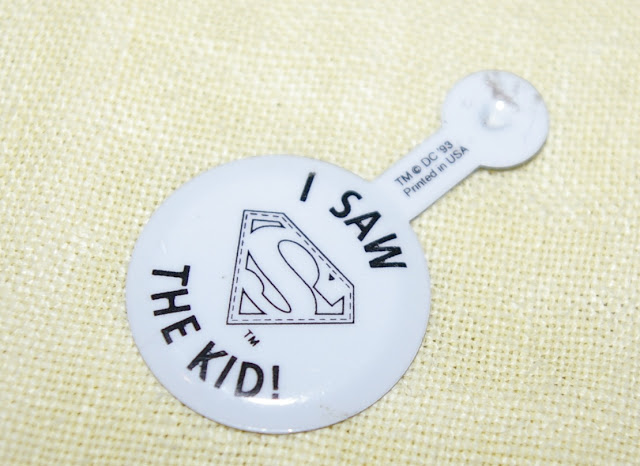 Diving into the box.. For a brief period in my youth between "caring about baseball cards" and "caring about girls" was a "caring about comic books" phase. I guess this Superman pin from 1993 was in there. Truth be told, I never actually saw the kid. One of these days I'll do a post or two on the few comic books I still have. 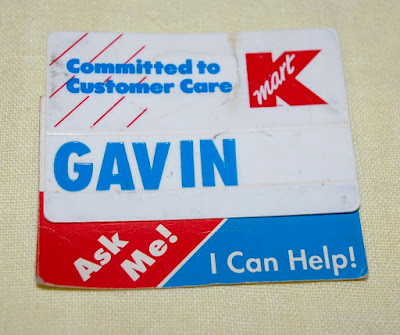 My first job was working at Kmart,. Stuck around there for over a year (May 1995-June1996). It wasn't too bad.. straightening shelves and rounding up carts in the parking lot. The worst part was probably apologizing to people when the good stuff on sale that week was all sold out. The location has since closed down; I think it's now a KOHL'S last I checked. It's been nearly 20 years, but I've still got my old name tag. Those "Ask Me! I Can Help!" cards are good for a free coffee. Wonder if they'd still be honored at this point. 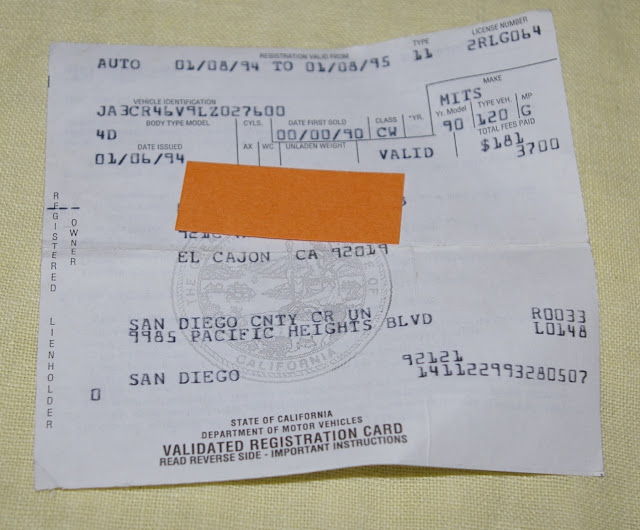 Here's proof of registration from my first car, a 1990 Mitsubishi Gallant. White. It was a decent car.. a hand-me-down from my mom. My 2nd card was also a Gallant, also from my mom, a 1994 Gallant. That car served me well, too. 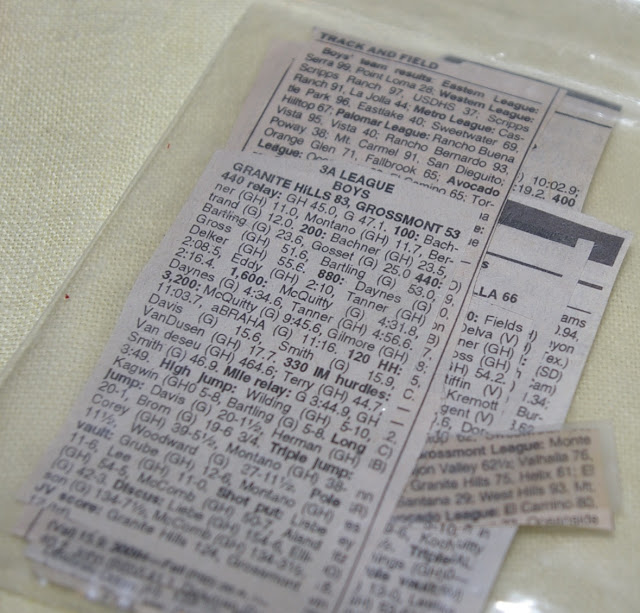 I know I've bragged on the blog once or twice before that I was a sprinter track star back in high school. Ah, glory days! They'll pass you by in the wink of a young girl's eye. My school pencil box held a nice little pack of clippings with track meet results from the local newspaper. That afternoon verses Grossmont HS was a good one for me, winning both the 100 and 200, and I'm pretty sure I was on the victorious 440 relay team too. This was '94 or '95.
"Grossmont" is a confusing word because my HS district was called Grossmont Union High School District, and the JC I went to was called Grossmont College.. but Grossmont High School was a totally different thing. Also, my first girlfriend went to Grossmont HS. I remember hanging out on the vacant campus on the weekend with her and my bud Doug and his 1st GF Leevie.. good times. But by this time we had broken up, so I suppose that made the victory over them all the more sweet.
Looking it up right now, turns out Grossmont HS has had a few notable grads. Frank Zappa, for one. Wow, a musical legend! Also weed comedian Doug Benson and "Joe Isuzu" David Leisure. As far as baseball players, their best known guy is probably Barry Zito, but looks like he didn't graduate from Grossmont, just went there for a while then transferred. I remember them for having a pretty strong track team, so I'm sure to spank them so well was great for us.


Great song, with its message renewing itself far too often, such as in the wake of the recent tragedy in Paris.

That's all the nostalgia for today. Back with more next time. Thanks for being here!
Posted by defgav at 12:06 AM