buying cards out of spite

More than once I've bought a card online and then found it at the card show significantly cheaper (or vice versa), and proceeded to knowingly purchase a duplicate purely out of spite.

In a similar story, not long ago I saw a post from guy on the cardsphere who happened to end up with a Gavin Lux blue refractor Bowman auto. In his post, he said it didn't really fit his collection and would probably end up selling it. I hadn't traded with this guy before, but felt confident about working out a swap so I dropped him an email with a pretty solid trade package offer of cards that fit better into his collection for roughly the same estimated value as the Lux. Days turned to weeks and I never heard back from the sumbitch. Sure, he's got no obligation to agree to a trade with me, but at least a "thanks but no-thanks, man" reply would've been cool. Even if he wasn't keen on the cards I was offering initially, we probably could have easily hammered out a deal agreeable to both sides.

Anyways, fuck em, I just scored the card off eBay, so I added it to my collection one way or another, though flipping some cards for it would have been preferable. 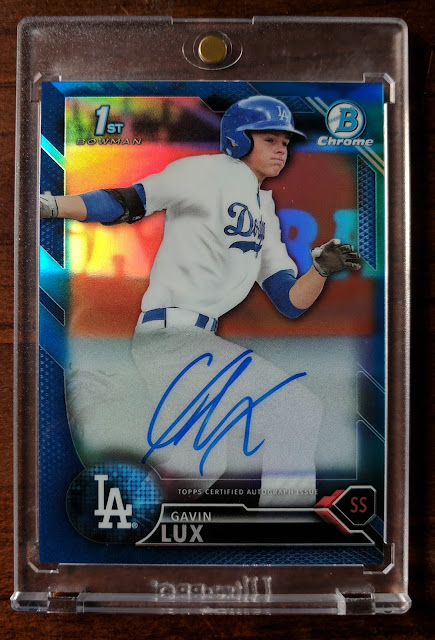 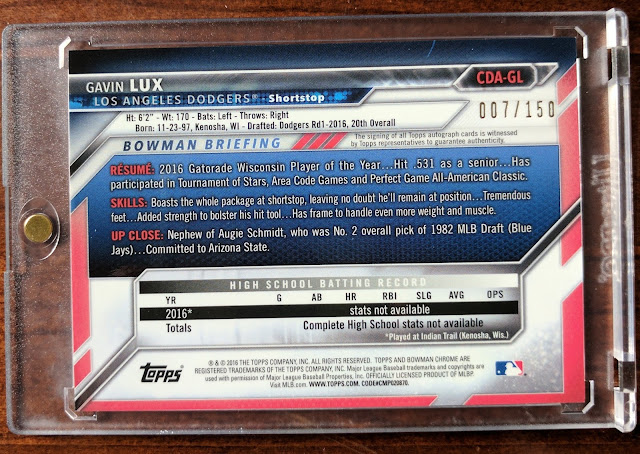 Lux is a top prospect at shortstop for the Dodgers. Though at only 19, and with Corey Seager expertly manning short for LA these days, Gavin likely won't be rushed up the ladder. Wishing him a strong 2017 season in A ball.


I'm gonna fill out the rest of this post with some other recent additions to my all-time Gavin collection. I believe these were from a COMC order a while back. 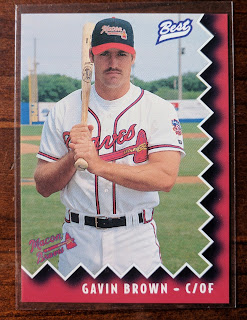 Gavin Brown is a new name for the minicollection. His career only lasted a couple years in the minors. He was pretty versatile, doing some catching, though mainly stuck to the corner outfield spots. Even pitched an inning once. Reminds me of what the Padres hope to do with Christian Bethancourt this season, being a super-utility guy who can play outfield, catch, and pitch, all on the regular. 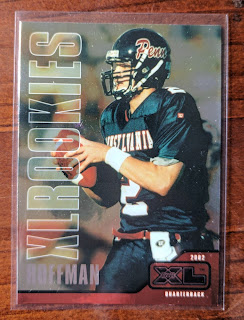 Gavin Hoffman is another guy I don't think I previously had a card of. I don't know much about him other than he played at Penn for a couple years and set some school records there after transferring from Northwestern in 1999. Doesn't look like he ever ended up going pro. 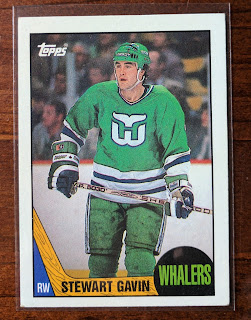 I've got 5 or 6 Stewart Gavin cards, making him the top non-baseball Gavin represented in my collection after the NFL's Gavin Escobar. But I believe this is my first card of him from his Whalers days. Gotta love that logo. ..though I'd like to believe the whalers that the team was named after were just big fans of whales, the awesome giants of the sea, not hunters of them. But oh well.

That's it for today. Thanks for stopping by.
Posted by defgav at 4:47 PM