A got sweet package from John Miller of Johnny's Trading Spot early in the week, but been quiet on the cardboard front since then, though I'm still waiting on Saturday's mail as I draft this up, so maybe there'll be some last minutes additions to this weekly trade roundup, but for now, heeeeeere's Johnny's cards he sent. 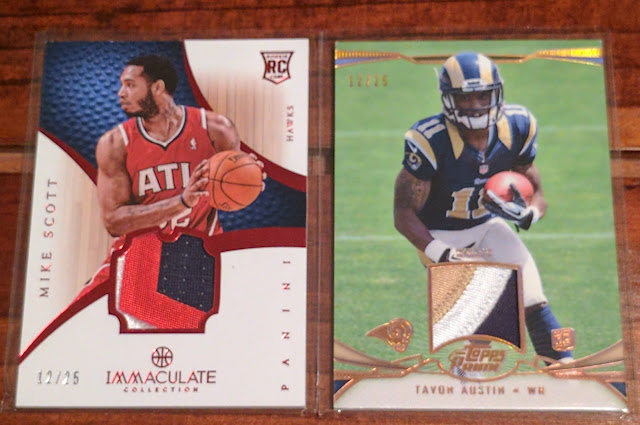 Looks like he came across a cache of 12/25 patch cards.. very cool! These are a big step up from plain white or grey swatches that I'm more accustomed to. I definitely didn't have many "sick patches" in my collection, much less Christmas Card sick patches. Don't know who Mike Scott or Tavon Austin are, but still very appreciated additions! 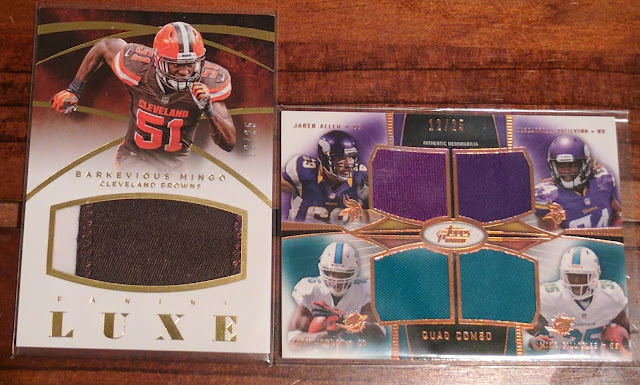 And a couple more 12/25 memorabilia cards! Barkevious Mingo is a great name. As for the quad relic, the names are tough to read, even in-hand, so here's the back... 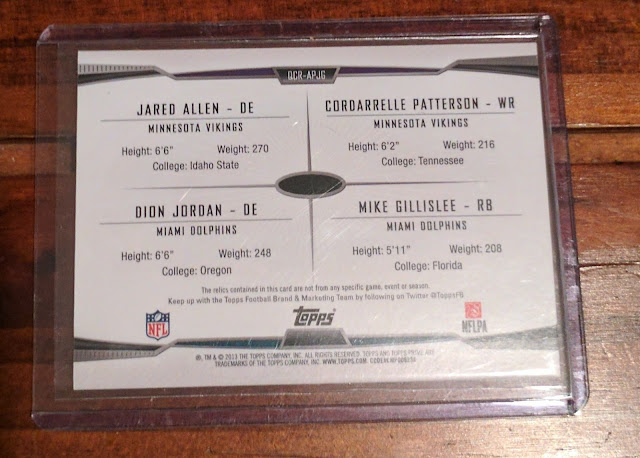 John also included this large lot of cards for my 2011 Topps parallel frankenset project. Some I needed, some I didn't, but when the dust had settled and spreadsheet was updated, he had pushed me over the 1/3 complete milestone! Kinda crazy to think that with how many of these things I have, I'm still just a third of the way toward my goal. Plus there's still the Trout RC to worry about. Honestly, I briefly considered nixing this ridiculous project a while back. But I like it because it widens up my general "wants" and gives traders a better chance to find cards I need. And I appreciate these parallels a lot more than I do random junk Padres.

This lot also marked the first time in my life I've brought cards to work so I could mark them off my spreadsheet during a break. It almost backfired on me as it was rainy going home and I hadn't packed up the cards quite as airtight as I should have. But luckily they didn't seem to take any water damage.

Big thanks, John! Hopefully the latest batch of "same names" for you arrived safe and you're happy with them. (Update: from the looks of his latest post, looks like everything's good.)

Ok, guys.. Saturday's mail just came and guess what, there was only one card-related mailing in there.. and it was a package from.. John Miller! LOL. That means John runs the table for the week as far as incoming cards from the cardsphere. This second package is actually my prize for being one of the winners in a recent contest he held. Let's see what I won!... 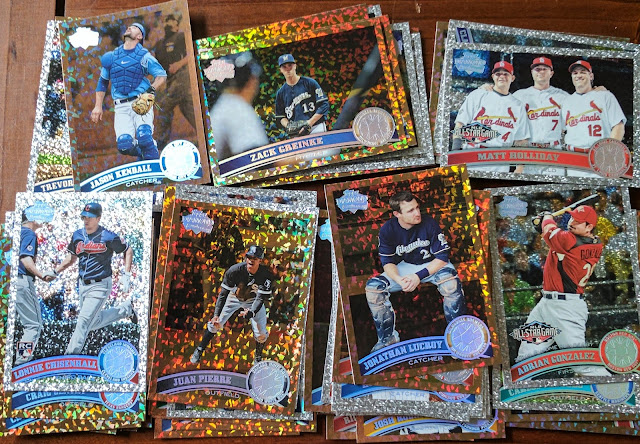 Ha, another big lot of 2011 Topps parallels! Nice! Some solid names here. Looking forward to sorting these out and updating the spreadsheet. 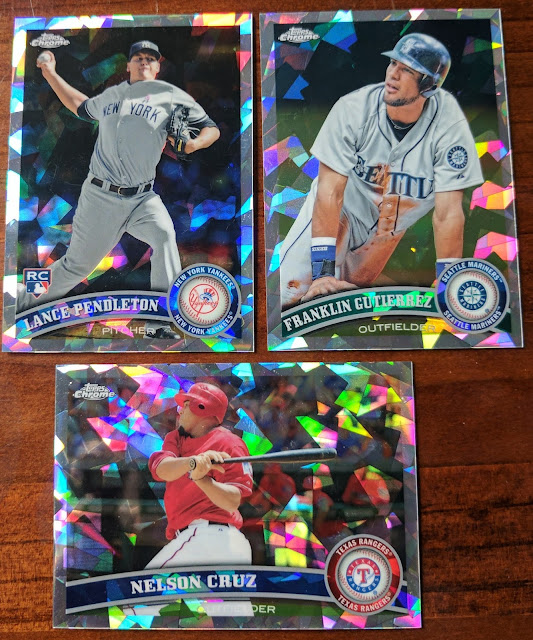 In addition to all the diamonds and liquorfractors, there were 3 lovely Chrome atomic refractors, each numbered /225. These are beautiful cards. Even my wife who was in the room when I took this photo commented on how pretty they are.

However the big star of the 2011 parallels is one that I missed my first time flipping through the cards... 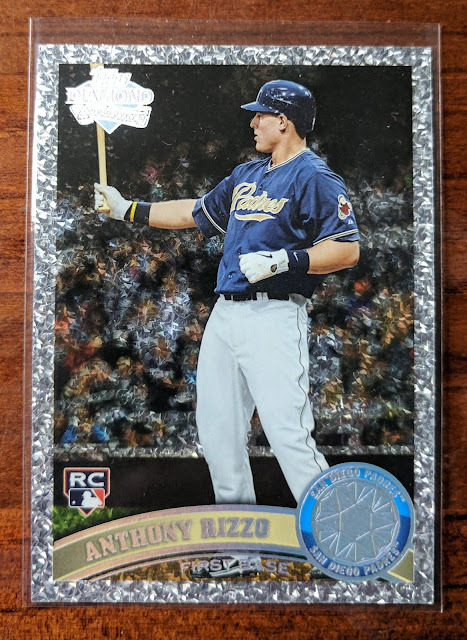 Boom!... Awesome Anthony Rizzo diamond RC! After the Trout, this is definitely one of the most sought-after cards in the set. 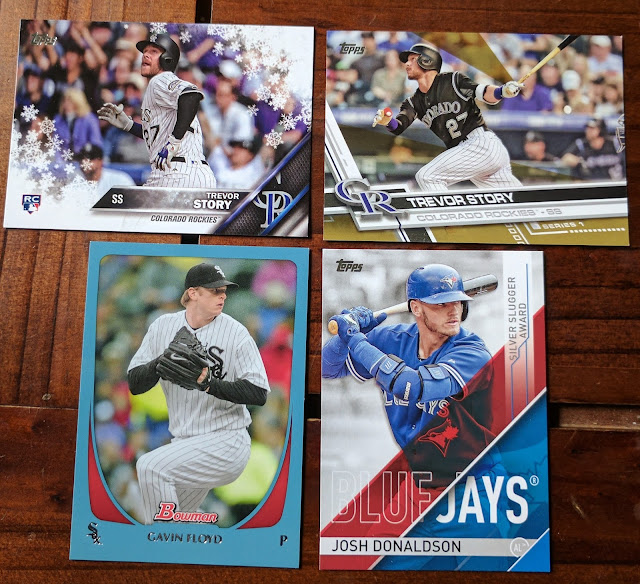 It wasn't all 2011 Topps parallels, though, as John also gave me a couple Trevor Story cards, a Gavin Floyd, and a John Donaldson. The gold Story is /2017 and the blue Gavin is /500. 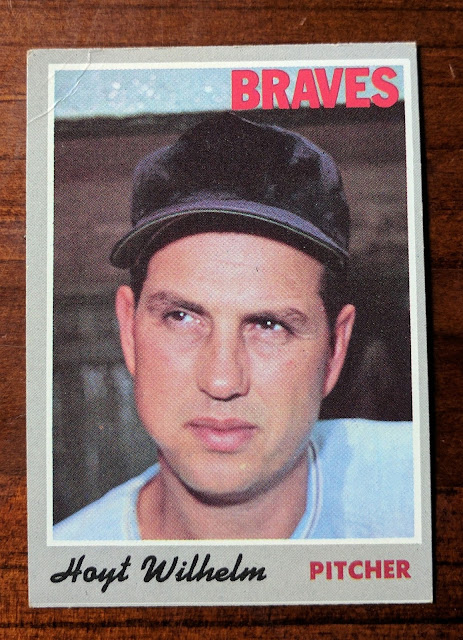 And ending this post with vintage, here's a 1970 Hoyt Wilhelm I was missing from the PC. Super happy to see this among the cards in the package, even with a creased corner.

Again, thanks so much, John! Great stuff all around.
Posted by defgav at 4:20 PM