April may be the cruelest month, but the April card show was very kind to me

Oh man! Today was one of those days that card collectors dream about. First off, it was the monthly card show day. Scored a bunch of good cards there. Plus I ran into Padrographs Rod who hooked me up with a big bag of probably a couple thousand cards. Then I met Ken from Cardboard Hogs for the first time and he gave me a sweet Gavin Escobar relic. Always cool to meet a fellow cardblogger in person. Then I came home to find a contest win from Summer of 74 (by way of Tony L.) plus one of my coolest TTM returns ever (well, not technically a TTM, but rather an in-person autograph done by proxy).

Wow, I'm not even sure where to start as far as posting about the new cards. Well, the lot from Rod will take several days, if not weeks, to sort through, so that'll have to wait.

Let's go ahead and start with a post on the 57 cards for $41. For added entertainment, I got to listen to Bill talk about his marital drama with another older gentleman while I thumbed through his cards. I'll spare you the details, but it was pretty juicy. I hope he and the mrs. are able to work things out. 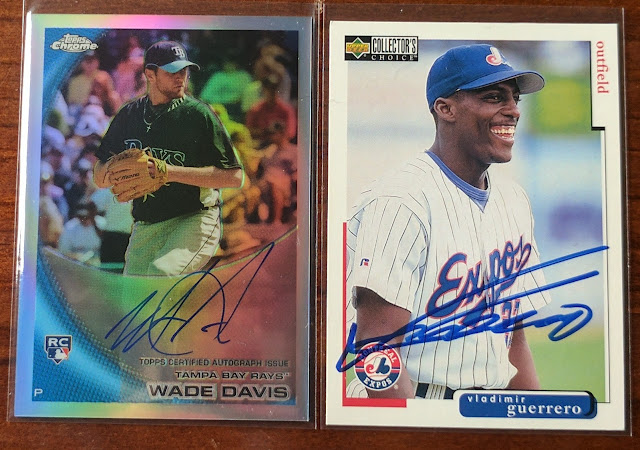 Best foot forward here with a couple impressive autographs. I was surprised to find this Wade Davis Chrome RC refractor /499 in there for under a buck. I'll hang onto it then sell it for a big profit when he saves Game 7 this November. And the Vlad auto isn't certified, but sure looks legit to me.. nice addition to that PC. 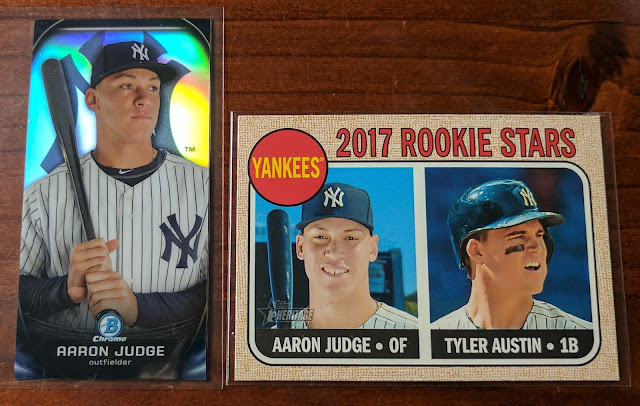 Permission to approach the bench? Aaron Judge has been carrying the Yanks on his ample shoulders so far this season. Had to get onboard the bandwagon and grab a couple of his cards. Sustained! 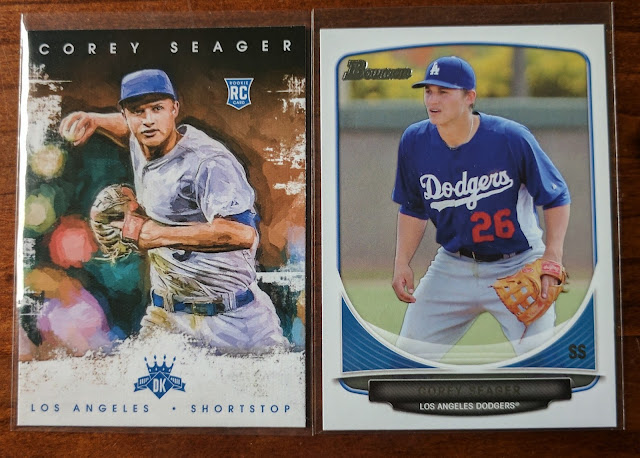 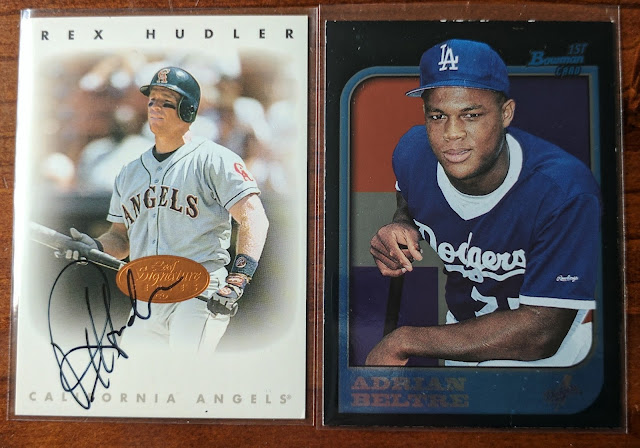 I love those Leaf Signature cards and will pretty much always pick up any I don't think I have if the price is right. And the Beltre 1st Bowman has some chipping up top, but it's the International parallel, so I thought it was worth it. (Checking it online right now, none available on COMC and the cheapest on eBay is $18.49.. so yes, was definitely worth it.) 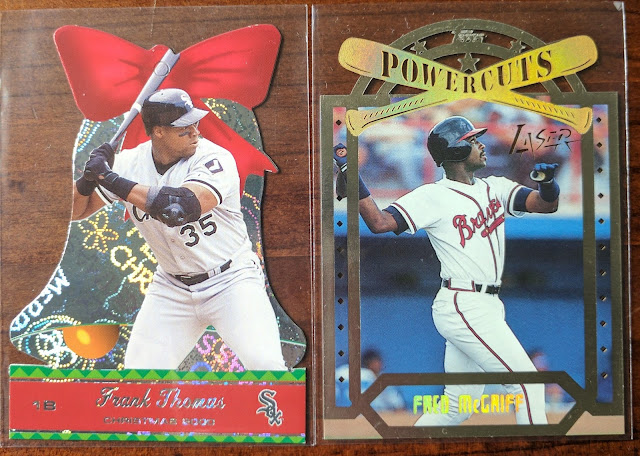 My love for wave refractors is well documented on this blog. Pretty cards! 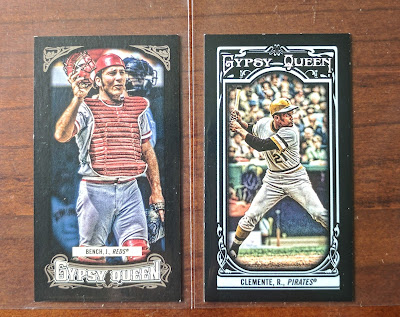 Johnny Bench and Roberto Clemente black Gypsy Queen minis, each #'d /199. Couldn't throw these on to my stack fast enough! Well, the Clemente for sure.. the Bench I debated about for a few seconds. 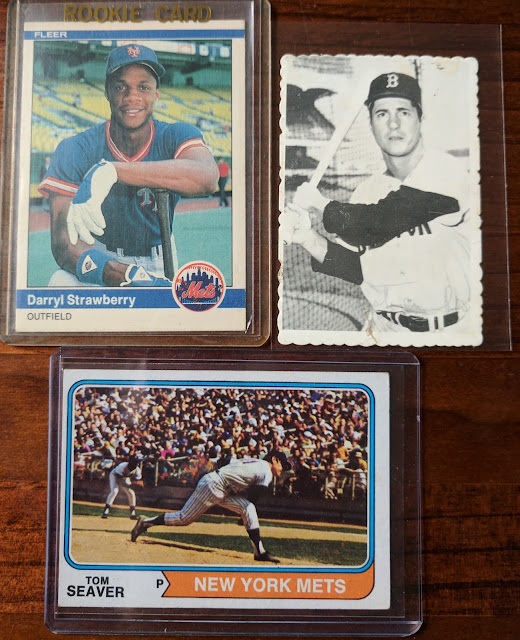 Here's the vintage-y portion of this haul. Darryl Strawberry will be prominently featured on this blog soon (foreshadowing!). The Yaz decle is a bit beat up, but could be worse. And the '74 Seaver is a cool card. 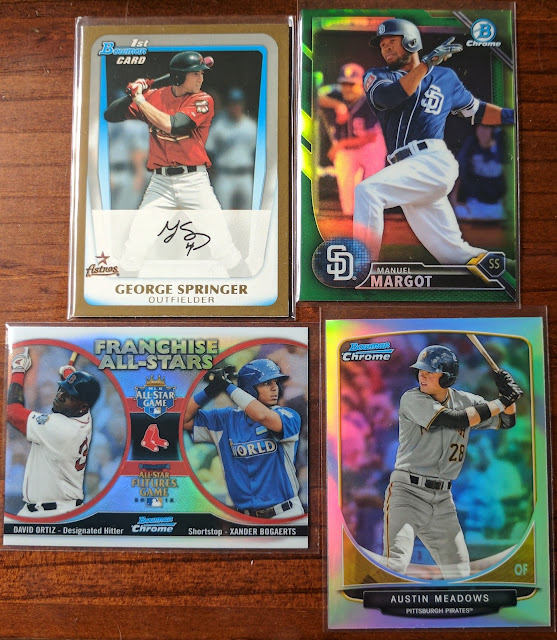 Some Bowman parallels and such. Manuel Margot is a guy I really like collecting, so was excited to find that green refractor #'d 12/99. 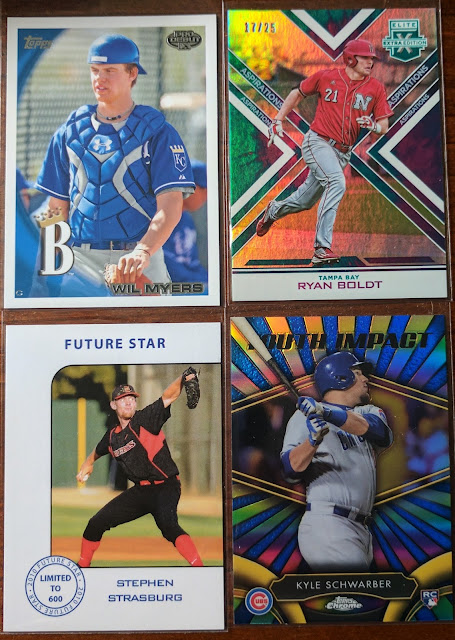 More cards. Another early Wil Myers "catcher prospect with the Royals" card for the PC. Don't know who Ryan Boldt is, but took a flyer on this card #'d 17/25. I can't say no to Stephen Strasburg cards where he's pictured in his SDSU uniform. Go Aztecs! 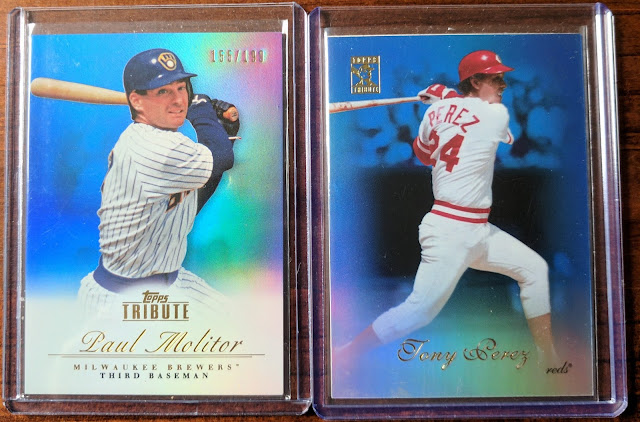 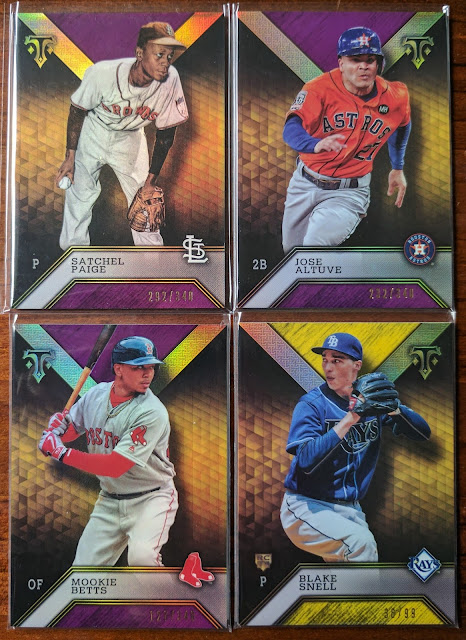 I came into a rich deposit of relic cards, and just grabbed them all, which will close out this post. I collect Billy Hamilton and Cutch, though the Hanley is available if any of my Sox trader buddies wants it. 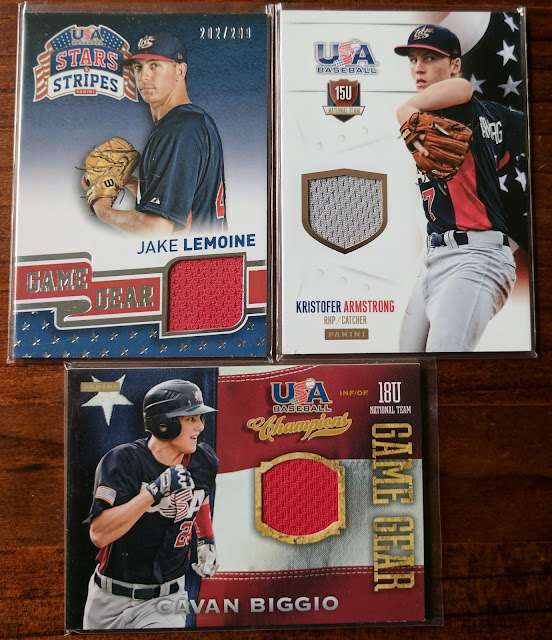 Some Team USA relics. Not familiar with these guys besides Cavan Biggio. I think Craig meant to name his son "Gavin" but coughed and accidentally named him Cavan instead, sadly. These are available for trade, I suppose. 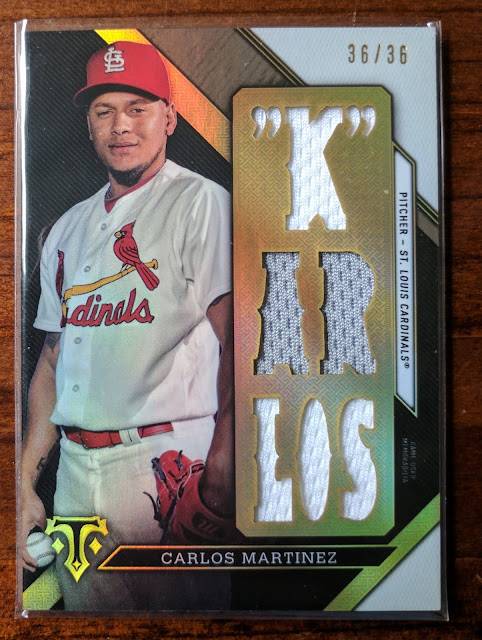 Last card of the post. Surprised to find this sweet-ass triple relic #'d 36/36 for under a buck! I don't collect Carlos Martinez, but it'll make for solid leverage next time I'm working out a deal with a Cardinals fan.

That's it for today. Thanks for stopping by! Plenty more fun cards to show off this coming week.
Posted by defgav at 3:45 PM