The hockey playoffs are in full swing, so let's sneak in a hockey card post.

If Manon Rhéaume came along today, I'd probably collect the heck outta her cards. I'm all about chipping away at the idea that top level pro sports can only be played by dudes (and straight dudes, at that). I hadn't heard about her until seeing her cards pop up on a couple card blogs recently, but back in the early 90s, Manon played minor league hockey and a couple pre-season exhibition NHL games. (See her Wikipedia entry for more info.)

She had a bunch of cards put out back then, mostly from Classic, including some certified autos. I snatched up one off eBay the other day. 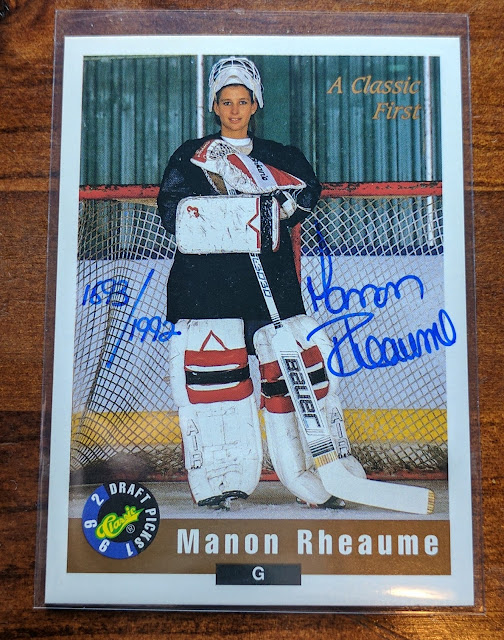 I think it's a pretty nice card. I'm getting a Jennifer Lawrence vibe. I mean, not that looks are everything, and even if she looked more like Don Mossi I'd still want a card of her based on her accomplishments, but a pretty face definitely ups the collectability. It's numbered 1693/1992, which is actually low-numbered by 1992 standards. 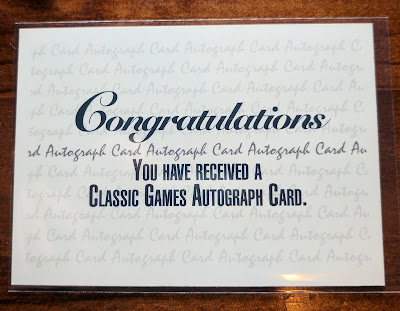 The back lets me know this is an autograph card. 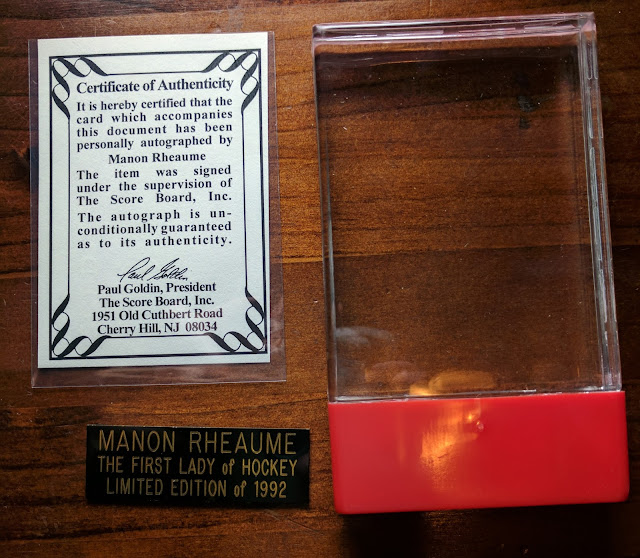 It also came with a separate COA card card-sized piece of paper (which is redundant since the back of the card is all the authentication you really need), plus a thick lucite case and an engraved metal nameplate for it. I'm thinking I might end up using the case for another card and not bothering with the nameplate, but we'll see.

If anyone has any other Manon Rheaume cards to trade, I'd likely be interested. Hers is a cool story and hopefully more women come along to play in the major sports currently dominated by men.