I first got obsessed with baseball cards in 1990. So my initial experience of being swept up by rookie-mania was Kevin Maas. I didn't go out and spend all my allowance on his rookie cards or anything, but I did cherish those few cards of his that I pulled from packs in late 1990 and early 1991. He got everybody thinking he was the next Mickey Mantle when he came up, cracking 21 homers in half a season, which was a lot back then.

But of course he couldn't keep up that pace and his once red hot cards became ice cold. In a full season DHing and an occasional start at first base in 1991, he only mustered 23 home runs while batting .220. He trailed off from there the next couple years, getting less and less playing time. The Yankees eventually cut him loose. I didn't realize it until drafting this post (or I had forgotten), but he signed with the Padres in 1994 a couple weeks after getting the boot from New York. He never played with San Diego, but spent a month in AAA, and tore it up in AA for 4 games (1.944 OPS) before being released and bouncing around within the organizations of the Reds, Twins, back to the Yankees, Brewers, Hanshin Tigers in Japan, Astros, and back to the Reds.

Anyways, the sentimental fool I am, I recently felt the need to build up a little Kevin Maas PC, I suppose as a way to harken back to my childhood collecting days. 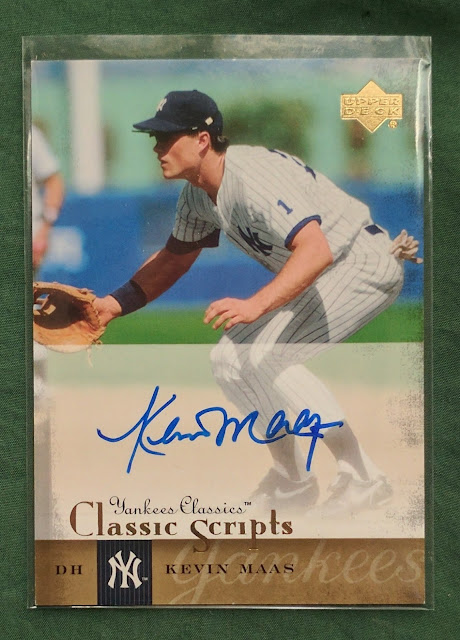 Here's an auto I scored on eBay for around $5, I think. He doesn't have many certified autos out there, though he does seem to be a generous signer for fans, so his autograph is by no means tough to come by.

Below are a few cards I picked up in my recent Just Commons order.

Love the crazy '95 Fleer card with the Twins, as guys in unfamiliar uniforms like that are always fun to see preserved on cardboard. As far as I can tell, it's his only non-NY mainstream card. After being cut by the Yanks, his only MLB experience was a forgettable 22 games with the Twins in 1995.

I tried to dig up Kevin Maas cards from my childhood collection, but I seem to have jettisoned them when I slimmed down my collection prior to moving out of state in 2009. I know I at least had his 1990 UD rookie and the '90 Fleer dual prospects card he shared with the Brewers' George Canale.

I didn't bother to dig them out, but technically I think I've also got a few Maas cards within complete sets.. 1990 Leaf, 1990 Topps Major League Debut, and 1992 Stadium Club. 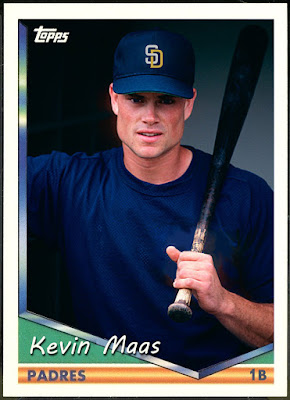 And here's a custom I just whipped up imaging Kevin got a card with San Diego in 1994. If it wasn't so dark, I might print it out and try a TTM attempt with it. I guess I could add a white cloud effect to the bottom of the picture. Eh, maybe someday when I get on another TTM kick.


So yeah, thanks for reading. I'd be up for any other Kevin Maas cards not pictured here that you'd like to send over to me in trade. Have a great weekend!
Posted by defgav at 4:12 PM