I didn't watch yesterday's Padre game in its entirety, but I did happen to have eyes on it when Wil Myers came up to bat and the announcers mentioned he was just a triple shy of the cycle. Since the triple is the toughest of the 4 hits to come by, I didn't get too excited. But then Wil drilled a pitch into the gap and was off to the races. Oh man, I was jumpin' and hollerin'.. That will likely stand as the highlight of the 2017 season for me. The team will greatly exceed expectations if they manage not to finish in last place, so moments like this are all the more appreciated by us hapless fans. It was super cool when Matt Kemp became the 1st Padre to (finally) hit for the cycle in 2015. But Myers cycle probably means more, as he's essentially become "the Face of the Padres", and the defacto "Face of San Diego sports" now that Philip Rivers and the Chargers are gone. Like many San Diego sports fans, I'd probably site him as my favorite current Padre. So yeah, it was really cool to see him get the cycle.

Let's commemorate his feat by showing off my Wil Myers PC as it stood on that fateful moment, 4/10/17.

My earliest card of his is his 2010 Bowman Chrome card, back when he was a catching draft pick with the Royals.

More 2013 cards, highlighted by my earliest autographs of him. Perhaps the biggest knock against Myers from a card collector standpoint is his incredibly lazy signature, just a simple wavy line. Hey, what do you expect from a guy who can't even be bothered to include the 2nd L in "Will"? LOL. Personally, I'd choose a guy who puts up good numbers but has a crap signature over a guy with beautiful penmanship who can't get out of A-ball, though ideally a guy would perform well both with a bat and with a pen.

The other knock against Wil is staying healthy. After his strong rookie year, he battled injures the next couple years. Still, coming off a ROY campaign, he got plenty of cardboard in 2014.

Here are some Panini cards, highlighted by a Christmas Card auto. This signature is a slight improvement over the 2013 examples we've seen above.. which is odd because guys' signatures usually get worse over time, not better. Looking at this picture now, I notice the DK is stuck over another card.. whoops, I'm typing this up at work, so I can't retake the photo right now. Maybe I'll update later.

And a few more cards from 2014. Actually those custom minis by way of Nachos Grande aren't dated besides the "2008" from the borrowed A&G design, but I'm guessing they were made in 2014.

Now we move on to 2015, finally getting Wil into his rightful Padres duds.. which sadly look pretty close to Rays uniforms (Bring back brown!) Regarding the bottom row, it's funny that I've got these parallels but not the base card versions. Seems like I've got like a dozen each of every other Padres card in 2015 Topps, but not a single Wil Myers besides the mini version?!

More parallels from 2015 (plus a base Archives).

The encased Gypsy Queen is my only Wil Myers 1/1, a Topps Vault blank back. The card on the bottom might be my favorite of his that I own, a cool looking acetate auto Christmas Card.

2016 was Wil's first full, healthy season in the big leagues. He had a great first half and made the All-Star team, though slumped in the second half, perhaps due to jacking up his swing in the home run derby. Still ended up with a fine year, chalking up 28 homers and 28 steals.


I don't have any of his 2017 cards yet, so my PC wraps up with these two swanky 2016 National Treasures cards I got from Matt Scott a little while back. (Wait, no, actually I do have some 2017 cards of the guy, but I haven't had a chance to sort them into the PC yet. So dang it, this post isn't quite up to date. I may have to do some updating to this post soon, but I'll go ahead and post it now.)

Update: I was too lazy to redo the photos, but here are my recent additions. 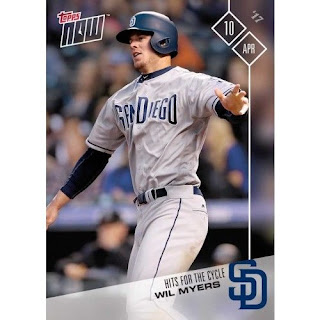 Another update: This obviously isn't in-hand yet, but I went ahead and snagged a Topps Now card off eBay.

Finally, here are the dupes I sorted out. They are up for trade if anyone needs any.


Thanks for reading. Please feel free to send me any other Wil Myers cards not pictured in this post!
Posted by defgav at 3:15 PM