Some cards for a big eBay milestone

Woo! Yesterday I just hit a cool 1000 for my eBay user feedback. I'm proud to say that's 100% positive, with nary a single negative or even neutral review sullying my good name. Sure, the majority of my transactions have been as buyer, but I've done a bit of selling on there over the years, too. And while I can't say 100% of my interactions have been perfect, even the ones that "went bad" were at least civil enough to where I escaped unscathed. Pretty impressive considering how many assholes are out there who seem to enjoy stirring up shit.

And I don't know if it's related or just a coincidence, but today I got an email from eBay telling me I'm now a Top Rated Seller thanks to my past performance, and that entitles me to 20% off final value seller fees, which is very welcomed because that's definitely where they get ya.

Anyways, the listing that has the distinction of giving me positive nod #1000 is the Curt Smith TFF Psych auto I already showed off a couple weeks ago (seller was a little slow in leaving feedback, but whatever), so instead I'll use this post to show off a few other recent eBay pickups that I haven't gotten around to working into posts yet. 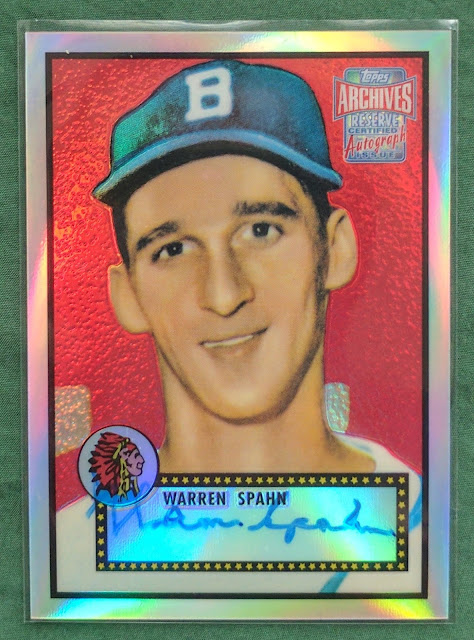 The great Warren Spahn! He was a great signer throughout his life, though his signature understandably got a bit sloppier near the end. Still better than most athletes these days! This is my 2nd auto of his, the first being a 2003 Topps Retired card. I nearly scored a 3rd Spahn auto recently, a signed penny sleeve that the Summer of '74 blog put up as trade bait, but seems somebody else beat me out for it. 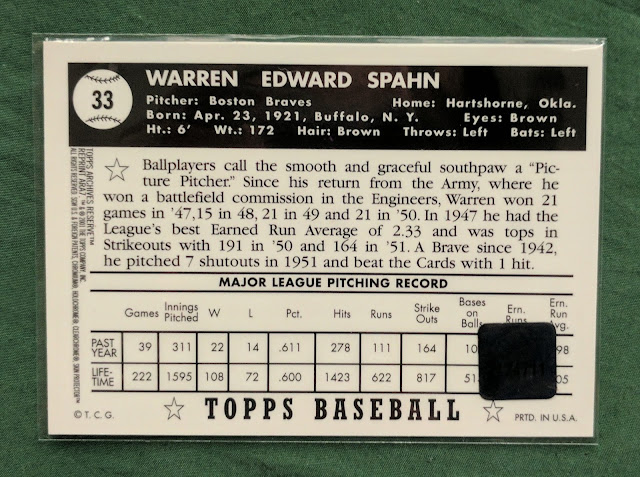 Here's the back. It's a nice pickup for my ARMS (Archives Reserve Master Set), which is my looooong-term goal of acquiring every Archives Reserve card ever put out. Oh man, if Topps ever revives this product line, I'm screwed. No way I would include a reboot in this ARMS project. I'm sure they'd have a bunch of parallels and 1/1 stuff if they brought it back today. A beautiful thing about the original Archives Reserve (2001-2002) is there are no parallels and no printing plates, so a master set isn't an impossible dream. It's definitely costly tracking down all the big name autos and relics, but not impossible. Oh, and I'm not including any buybacks in this project either (I suspect some base cards were signed, slabbed, and included in recent Archives Signature Edition products.. but screw 'em, I'm considering that a different product). 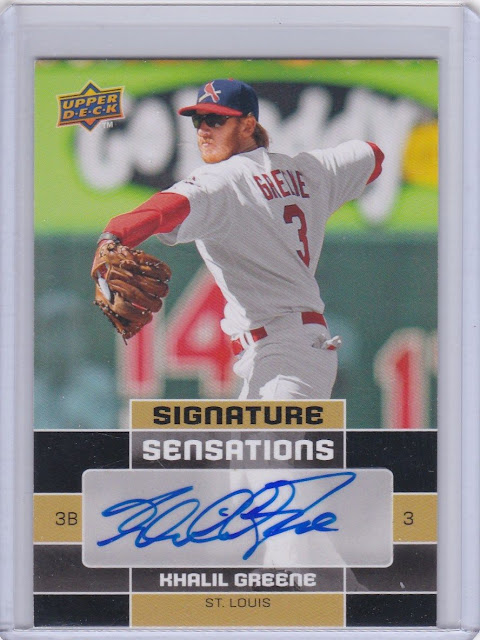 From one legend to another, here's a Khalil Greene auto. Ok, I'm being cheeky calling him a legend, but if you were a Padres fan in the mid '00s, his story has likely achieved legendary status for you. He was a hot prospect and in 2004, was runner-up for NL ROY. He then had a few solid years, but never quite performed at the elite level he (and fans) hoped for. He struggled emotionally under the pressure and was eventually shipped to St. Louis to finish his MLB career with a forgettable final season there. I think this is my first card of him as a Cardinal, and is his last widely-available autograph card. I had a saved search for it, waiting for a cheap one to come along. It seemed like a hole in my ample Khalil PC, so landing it helps round it out and make it feel more complete even though I'm sure there are several hundred more cards of his out there I'll never have. 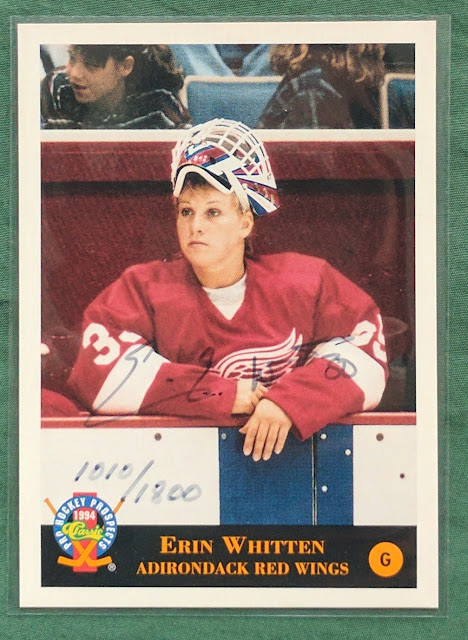 Maybe you remember a couple weeks ago when I posted about a Manon Rheaume auto I picked up. A reader gave me a heads-up to check out Erin Whitten. Turns out she was another exceptional woman goalie who played professionally with various men's teams in the mid 90s. Pretty cool. I took a look if she had any autos available and grabbed this one cheap. The signature is pretty faded, but like I said, it was cheap, so worked for me. 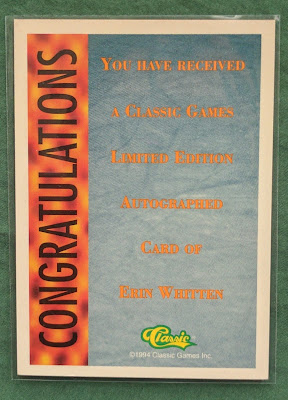 The back says it's autographed, so that's good, because it's not so easy to tell from the front. lol 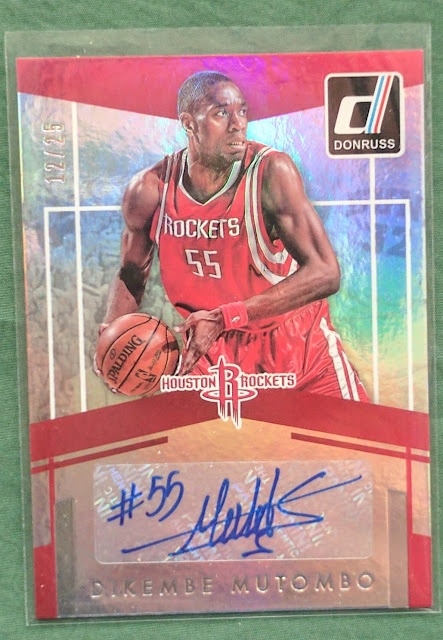 I never followed basketball too closely, but I thought Dikembe Mutombo was a fun player. In fact, I say his name a lot, just because it's fun to say, especially in a deep, bombastic accent. Go ahead, say it. d'KEY-m'BAY Moo-TUMBO!!!
I was looking to score an autograph of his, and this Christmas Card ended up being what I went with after my best offer was accepted. But I kinda regret this purchase a little bit, to be honest. I just don't really like foilboard cards or sticker autographs. Even the 12/25 serial number can't quite save this card. Still though, a fun one to throw into my yuletide minicollection. 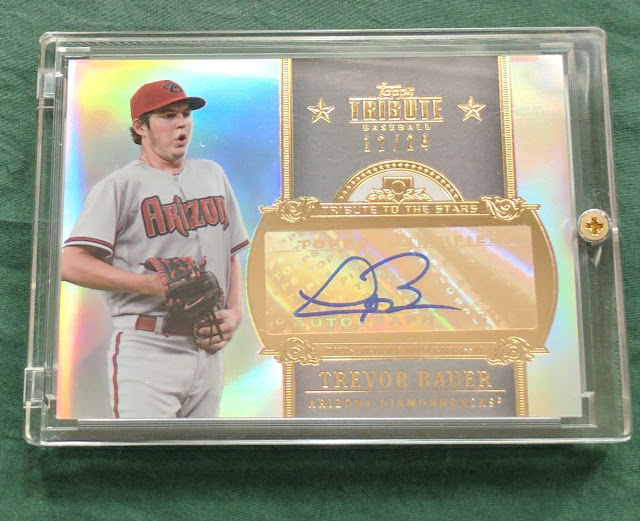 Speaking of cards I only care about because of the serial number, he's a Trevor Bauer auto. Well, at least this one was cheap. Plus it's #'d 12/24. If a Christmas Card is a unicorn, then a Christmas Eve Card is a unipegasus (unicorn with wings.. extra fantastical!).. much harder to find than 12/25 cards, especially if you want a player selection better than washed out former fringe prospects-- mostly football and basketball, at that. At least Bauer is still in the majors, stinking it up with the Indians. The basic design of the card is nice, but the stickergraph sucks, and man, that's gotta be one of the worst photos ever on a modern Topps card. The poor guy is fumbling with his glove, looking like he's in the middle of being shelled. (which is likely)

Anyways, yeah, those are some various cards I picked up on eBay on my way to a perfect 1000 feedback rating. I'll be surprised if I make it to 2000 before running into a jackass to ding me, but here's hoping!
Posted by defgav at 3:57 PM