Crazy weekend, right?!
Nah, actually it was a pretty chill. Just hung out, did a little cleaning.. went through a recent package from COMC. 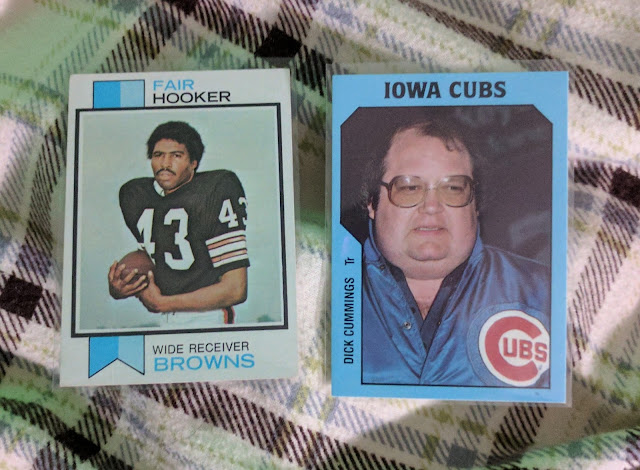 Call me immature, but I thought this photo of a Fair Hooker and Dick Cummings on my bed was pretty funny. I had to run out and pick up a Fair Hooker right away after seeing him on the Cardboard Hogs blog, I think it was. And then I came across Dick Cummings on Wrigley Roster Jenga. My collection would seem incomplete without it, so I splurged. (LOL, sorry guys.. first a weed post and now weiner jokes.. my blog may have gotten a little lowbrow lately.. I'll have to class it up more soon.) 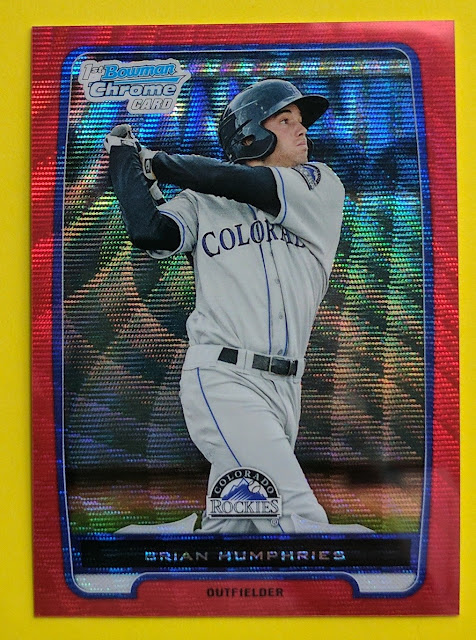 I've already completed the rainbow for Brian Humphries' 2012 Bowman Chrome card, only missing some printing plates, so why did I add another red wave refractor to the PC?... 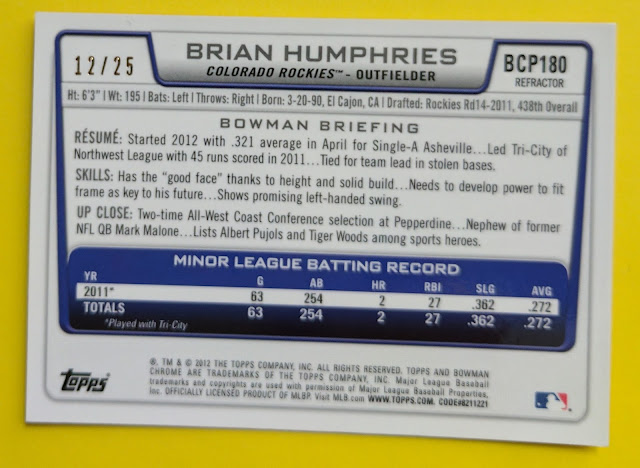 Christmas Card, that's why! Upgrade!
Not sure if/where Brian is playing this year yet. He doesn't seem to be on the roster for the independent Fargo-Moorhead Redhawks with whom he had a nice 2016 season. 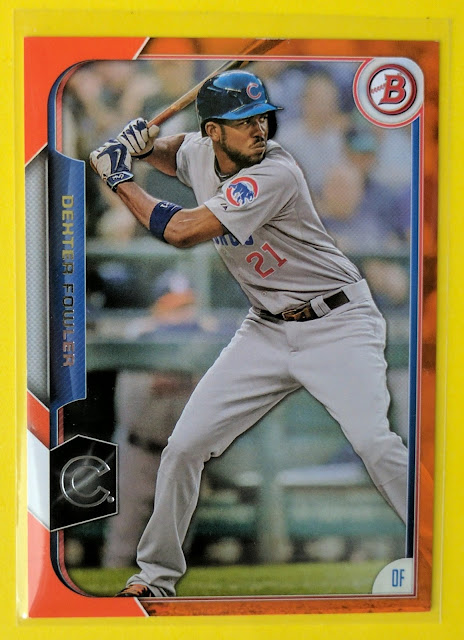 Dexter Fowler helped the Cubs win it all last year, then cashed in for a big payday to sign with the Cardinals. I don't really collect him, but was impressed by him speaking out against the travel ban in the face of St. Louis fans bitching at him to shut up and stick to sports. 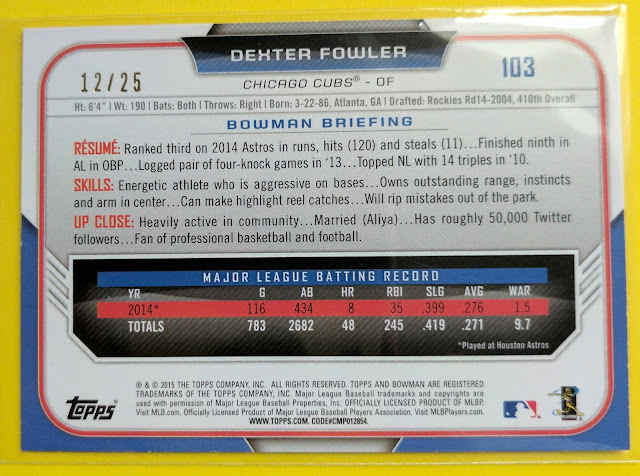 And it's a Christmas Card, too! 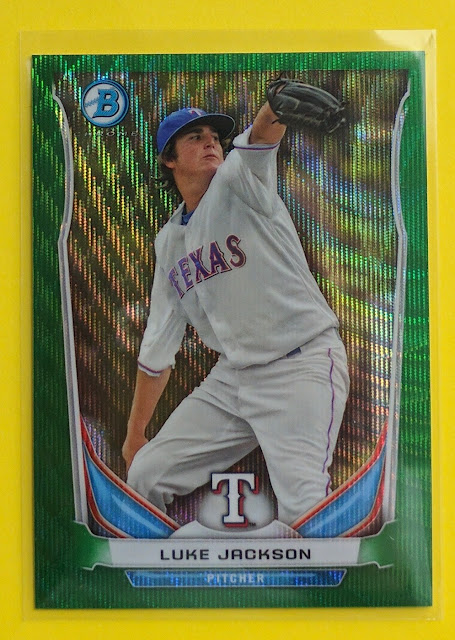 I love wave refractors. I already had a few various wave colors.. red, blue, black, orange.. but wanted to land an elusive green wave of somebody. Luke Jackson was the best name available for the price I was looking to pay. 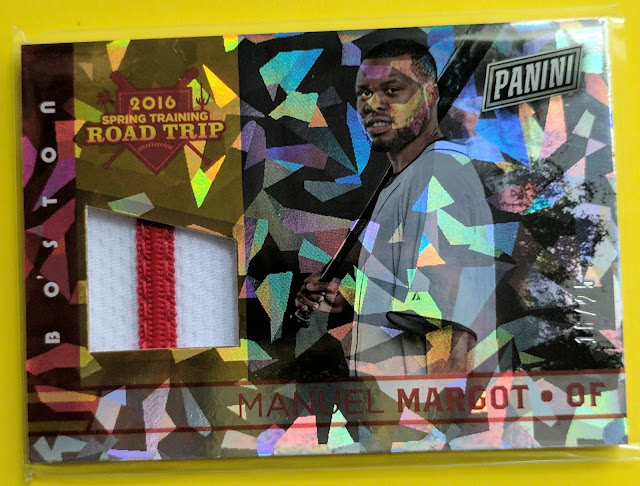 Here's a weird 2016 Panini Father's Day relic card of Manuel Margot. It's a "player worn" gimmick, likely worn during that photoshoot and that's it, not game-used, but it was pretty cheap for a memorabilia card of a top rookie, #'d 16/25. And the whole atomic refractor look is kinda cool. 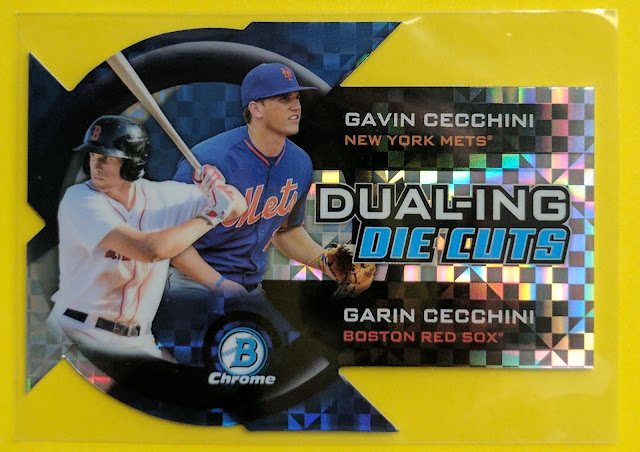 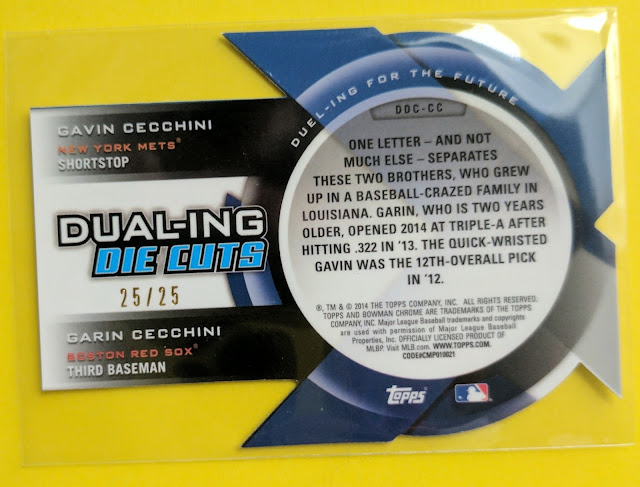 It's the #'d 25/25 xfractor. I already had the 50/50 parallel (shimmer refractor), so it was neat to get the "last of the print run" of a couple different parallels of the same card. 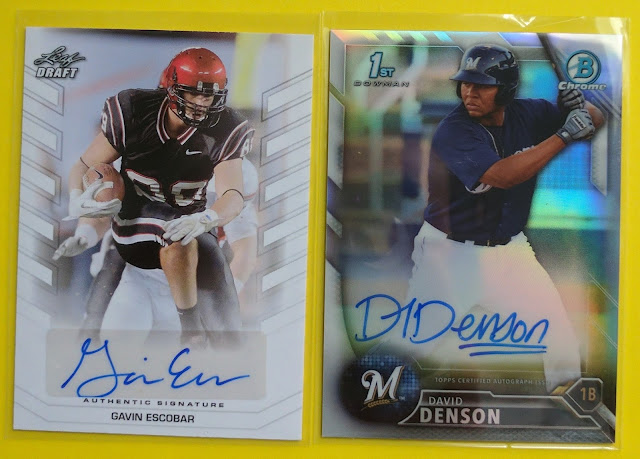 A couple cheap autos. I don't really need anymore Gavin Escobar autographs, but at just a buck-fiddy, I couldn't pass it up. Plus he's pictured in a (whitewashed) SDSU Aztecs uniform. After a lackluster 2016 season with the Cowboys, Escobar signed as a free-agent with the Kansas City Chiefs for 2017.

David Denson was never quite a top prospect, but is known for being the first openly gay active player in affiliated baseball. After batting .212 last year in A-ball, he decided to hang them up and pursue a career as a personal trainer instead. Bummer he couldn't break through to the bigs, but all the best to him. Happy to pick up this refractor auto for my Pride PC minicollection. Cool signature, too. 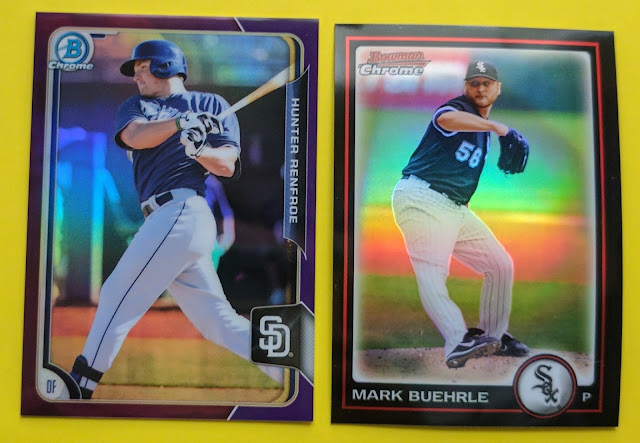 We finish up with a couple refractors. Hunter Renfroe has been doing ok in San Diego so far. As I was ready to place my order, I still had 31¢ in my account over the needed $3.99 for shipping. Instead of saving it for next time, I searched for cheap cards to clean me out, and settled on this 2010 Bowman Chrome Mark Buehrle refractor. I remember seeing his name trending on Twitter a few weeks ago and thought, "Finally, a team wisely signed him. Still got plenty in the tank." But no, turns out he's still retired. He was in the news because the White Sox announced they're gonna retire his number.

That's it for today. I also picked up some set needs, but we'll save those for another post. Thanks for swinging by. I gotta go wash my sheets!
Posted by defgav at 4:45 PM