Ok, you regular readers here know the drill: I bought a bunch of hobby boxes on sale last Black Friday with the intention of rationing them out over the following year, giving myself an affordable monthly ripping fix. I'm proud to say I've been strong and stuck to the schedule I came up with.

We're now down to the penultimate box of 2014 Panini Draft, which is responsible for about half of my stockpile from Black Friday. Yes, I'm pretty sick of this product by now, but hey, these boxes were cheap, and I still think they were a better purchase than a blaster of Bowman or Donruss or whatever else I would otherwise likely be buying to scratch the pack-opening itch. 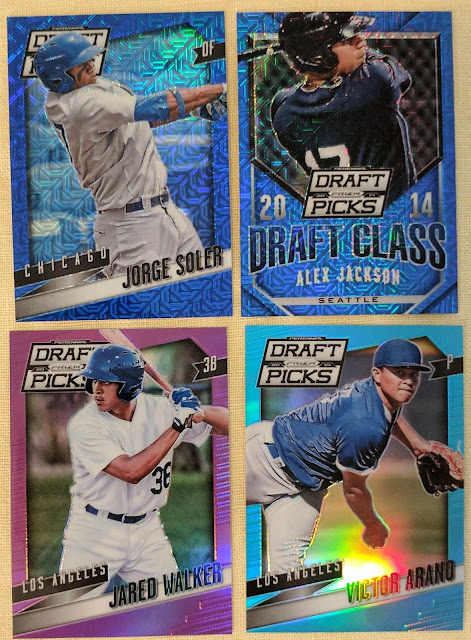 The colored refractors in this box weren't bad. Jorge Soler made a name for himself as a hot, young Cub not long ago, though he's faded since being dealt to KC.

Alex Jackson is the coverboy for this product, featured on the box and wrappers, but hasn't made much noise lately. The former 6th-overall pick by Seattle is currently in the Braves organization. These neat looking "Blue Mojo" parallels are #'d /75.

Jared Walker is a corner infielder grinding deep in the Dodgers chain, while Victor Arano is a reliever doing ok with the Phillies' AA club. 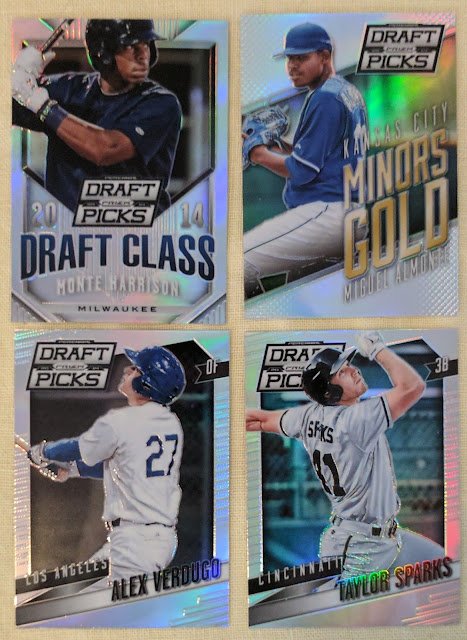 And here are the regular refractors ("prizm prizms") of the box.

Monte Harrison is a top-20 prospect for the Brewers with good speed on the basepaths and defense in the outfield.

Miguel Almonte saw brief time in the majors this year and in the Royal's Championship season of 2015. Currently on the DL, but has good numbers in AAA.

Alex Verdugo is having a nice year in AAA and might get a September call-up with the Dodgers. Heard his name a lot around the trading deadline with several teams interested the outfield prospect, but Los Angeles was able to hang onto him.

Taylor Sparks isn't having a very good year, batting .179 on the farm for the Reds. 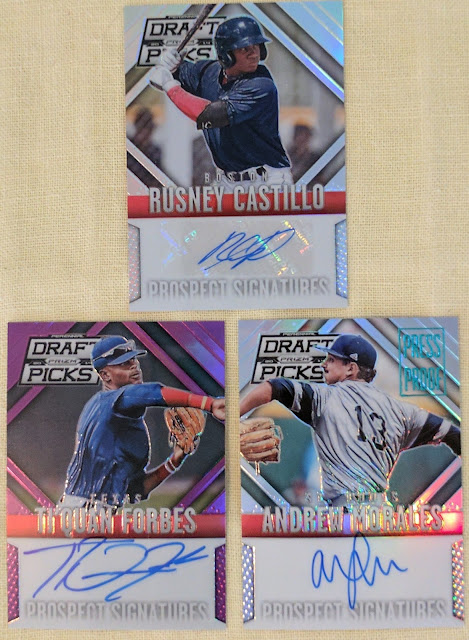 And the autos. Oh man, that Rusney Castillo auto would have been a sweet hit back when this product first hit shelves! He was hot stuff, getting a huge contract from Boston after coming over from Cuba. But of course he was a huge bust, and is now collecting his fat paycheck in AAA. (For what it's worth, he's having a solid season down in Pawtucket, batting comfortably over .300 with career highs in homers and stolen bases.) This is the first stickergraph I've pulled from the product. The mostly on-card autos are definitely a selling point for me. Another thing odd about the Rusney is he was an international signing, not a draft pick, so seems a little out of place in this set of 2014 draft picks.

Ti'quan Forbes, a third base prospect with the Rangers, hasn't done much yet, but he only turns 21 later this month, so he's got time to get going. Pretty sure I pulled a base auto from him in a previous box. This purple refractor is #/149.

Andrew Morales has been pitching decently in the Cardinals chain, though hasn't made it passed AA yet. The Press Proof parallels are #'d /199.

So this box wasn't too great.. but man, 2 or 3 years ago it would have been exciting to pull a Rusney auto, plus #/75 parallels of Jorge Soler and Alex Jackson. Maybe those guys will eventually reach their potential and become solid major leaguers, but that ship has probably sailed. Oh well, still a fun rip. Sadly, I don't think any of these cards are really keepers for my collection (might want to hang onto the Verdugo, though), so let me know if you're interested in trading for anything (also have lots of base from this product I'd like to unload).
Thanks for reading.
Posted by defgav at 4:28 PM