Regular readers know that two main off-the-beaten-path groups of players I collect are guys named Gavin and guys who went to Granite Hill High School. There's a kinship for me that makes these dudes fun to collect and follow. I recently did a 2016 recap for players named Gavin, now let's do a similar post for active Guys From Granite.

Let's start with a sweet TTM return that came back a little while ago. 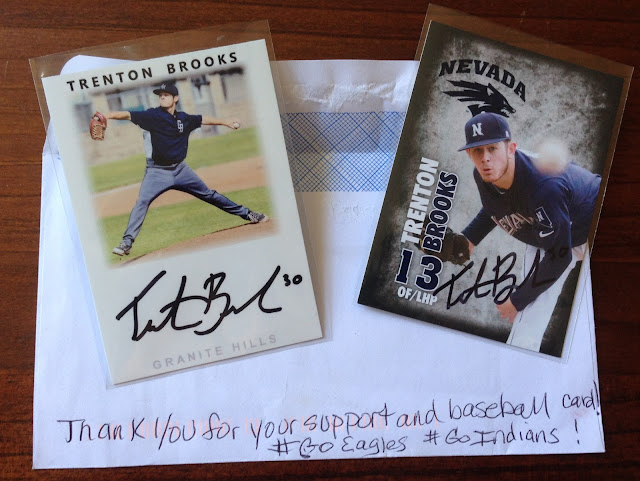 Trenton Brooks was one of two former Granite Hills Eagles to be drafted in 2016. I sent him 3 copies of a custom I made from his high school days (the Leaf Signature style card on the left). He kindly kept 2 as my gift to him per my offer and signed/returned 1.. plus he threw in another surprise signed card from his college days (right)! Awesome! It's the first time I ever received a bonus card from an autograph request. And as you see, he even wrote a nice little thank you note on the back of the return envelope. 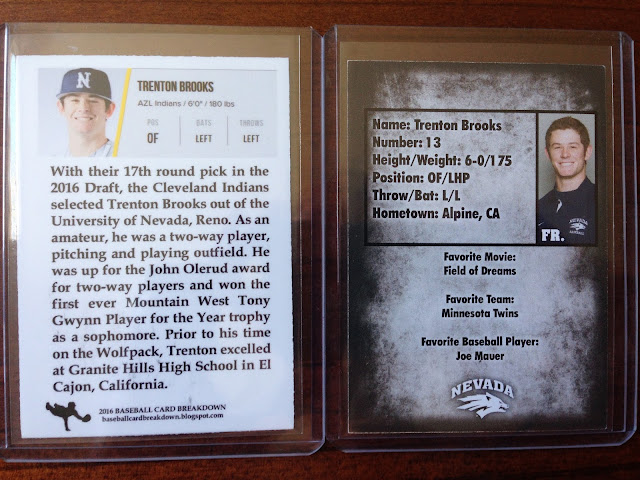 I put together a little bio for the back of his custom (ok, ok, it's mostly plagiarized from the web). The Nevada card adds some personal info. Interesting that a kid from So. Cal became a Twins fan.. I wonder what the story is there.

As evidenced by the fronts of his two cards, Trenton pitched a lot as an amateur. The Indians like him more as a batter/fielder, though, and he played center field in rookie league this past season. I sent the request to his Arizona League team, and a couple weeks later it returned, mailed from San Diego, I assume his home.

Thanks a ton, Mr. Brooks, and best of luck to you with your career!

Andrew Brown was the other 2016 draftee from Granite Hills, taken in the 13th round, and in fact was drafted right out of high school rather than college. The righty who just turned 19 put up solid numbers with the Gulf Coast League Phillies this past season. With Philadelphia strapped for talent these days, he's probably got a decent shot escalating up the ladder quickly if he keeps pitching well. Good luck, Andrew! 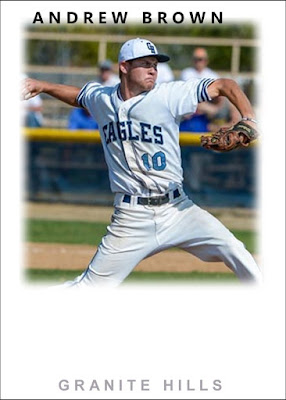 Granite Custom TTM update: Tried, but I didn't have any luck getting this TTM request back. I'll likely give it another shot next year.

Travis Taijeron put together his second consecutive strong season in AAA (OPS of .886 while leading the PCL in doubles with 42), but the Mets cruelly didn't give him a call-up, instead opting to overpay for Jay Bruce down the stretch to play right field even though there's no question Taijeron would have performed just as good if not better for a fraction of the price. He was also the Mets' best hitter in spring training, for what it's worth. Screw you, Mets front office! Here's a pretty good recent article articulating the situation better than I. Hopefully Travis will be plucked away from that organization and go to a team that finally gives him a chance to show what he can do in the major leagues. 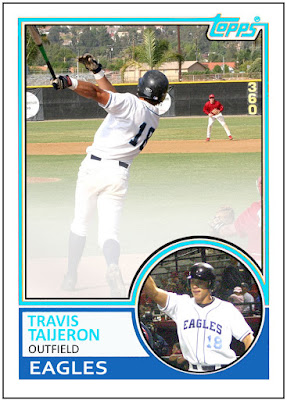 Granite Custom TTM update: Sadly, I've pretty much given up on getting a Travis Taijeron TTM autograph, as 3 separate requests have gone unanswered (one near the end of the 2015 AAA season, one during 2016 spring training, and one during the 2016 season).. bummer. But I still root for the guy despite his reluctance to answer his fanmail. Maybe I'll give it a 4th attempt sometime next year.. I'm persistent, gotta give me that!

John Omahen had a very nice 2015 in AA. He started back there this past season, and pitched well enough to get promoted to AAA. His luck didn't continue there, unfortunately, and he had a rough time of it (8.59 ERA). I'm not sure what the Diamondbacks have in mind for him at this point, but hopefully he can turn things around in 2017 and get called up. 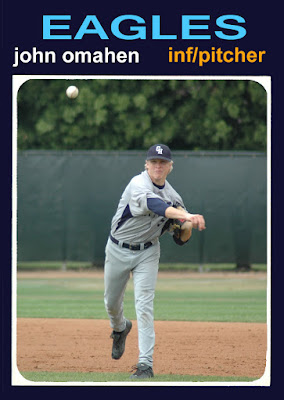 Granite Custom TTM update: My ill-timed request was sent out to his AA team right around the time he got called up to AAA, and has heretofore gone unanswered. He did kindly sign for me last year, a minor league issue, but it'd be sweet to have a Granite Hills custom signed by him, too. I'll likely try again next season. 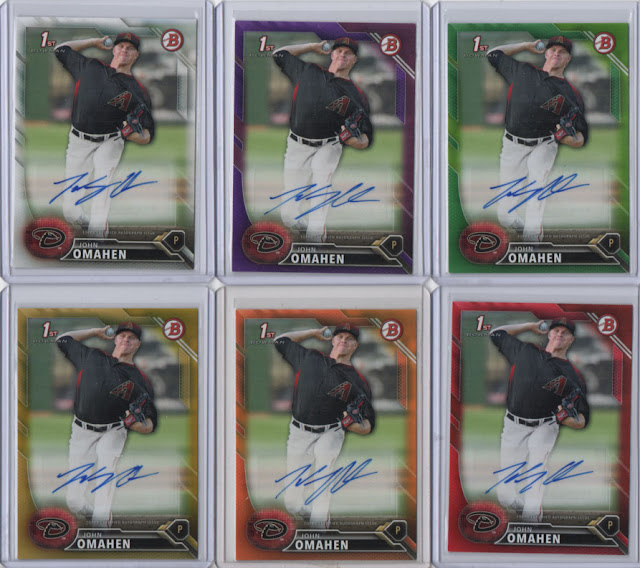 I did get a bunch of his autographs this year, though, thanks to him having (retail-only) certified autos included in 2016 Bowman. All I'm missing for the master rainbow is the 1/1 (just the one; no printing plates were put out for this card). Hoping that pops up someday.

The fifth and final Granite grad active in pro ball in 2016 to mention here is Brian Humphries. To recap his career, he was drafted by the Rockies in 2011, and despite solid numbers in the minors, they cut him loose in spring training 2015. Not one to give up, he signed with an independent league team for 2015 and had an awesome year. Surprisingly, he didn't get picked up by an organized-ball team for 2016, but went out and had another very strong season in independent ball, plating a career-high 66 RBI in 97 games. He'll turn 27 next March, so the clock may be ticking on his major league dreams, but I'm rooting for him. 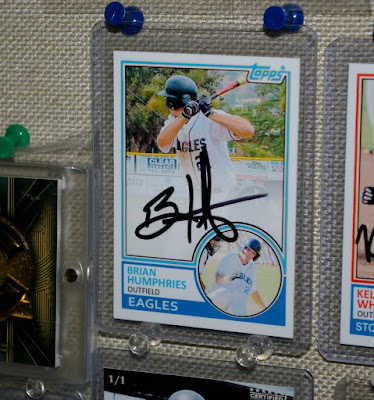 Granite Custom TTM update: Yep, I showed this on the blog already, but he signed for me this year back in July. That makes 2-for-2 in requests with him. Great guy! Best of luck, Brian!

CONTEST:
I get that minor league dudes who went to my high school might not be a topic with wide-reaching appeal, but it's something that I'm excited about... so much so that I want to bribe you guys into reading this post, so here's a contest. 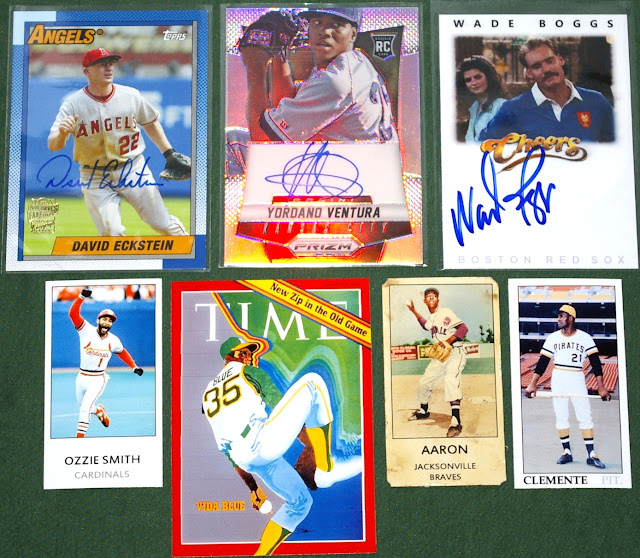 A few autos and customs. With the 2016 Fall Classic coming to a head, I picked guys for the prize package who were World Series Champions.

HOW TO ENTER: Leave a comment on this post predicting who you think will be the next Guy From Granite to make the major leagues. Could be any of these 5 guys or none of the above. This is actually 2 contests in 1, because a few days from now I'll randomize all the entries who commented for the above prize package. Then down the line if/when one of these guys makes the majors, my plan is to again randomize a bonus prize (more autos and customs) between all those who guessed correctly.

So who you got?

UPDATE: Contest entry period is now closed. Thanks to everybody who entered!
Posted by defgav at 2:00 PM