I recently took my Greatest Gavins mini-collection to the next level, scoring certified autos of "the big three" of Gavins who have trading cards. As I've mentioned before, if you do a card search for "Gavin", the majority will be the trio of Gavin Floyd (veteran pitcher), Gavin Cecchini (Mets shortstop prospect), and Gavin Escobar (Dallas Cowboys rookie).

And now I've got their autographs! Let's take a look.. 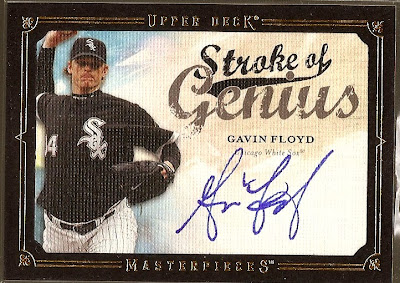 Anyways, Floyd recently signed a free agent contract with the Braves, which I'm happy about. As a kid, Atlanta was probably my "#2 favorite team", though these days they've pretty much fallen back with the rest of the pack.. though I do have an old Braves hat I wear somewhat often (I'm wearing it in my avatar, though you can't see the logo). Here's hoping Gavin F. rebounds from surgery to have a quality '14 down in peach country. 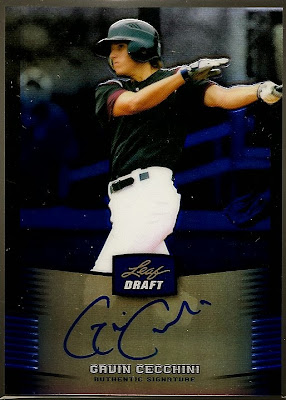 I just learned Gavin C. has an older brother named Garin Cecchini, who's a solid-hitting prospect with the Red Sox. Greatest Garins?! Uck! Looks like Mom and Pop Cecchini botched the birth certificate with their first son, so had to make things right with their second.

I also just learned that Gavin C's birthday is a couple days before mine. That's pretty cool, I guess. With luck, he'll get some traction in '14 and move up the ladder to hopefully make it up to the Mets in a couple years. 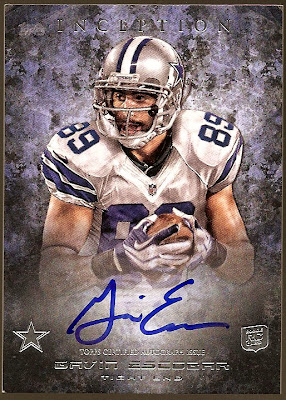 Escobar has really flooded the market this year in regards to "Autogavphs". As of right now, I count 1027 Autogavphs on eBay, with 354 being Escobar. That's over a third, by my math. (180 Cecchinis, 110 Floyds.)

Gavin E. just wrapped up his rookie year. Numbers below. I don't know enough about football to tell you if these are good stats for a tight end or not, but hey, a couple touchdowns and zero fumbles.. sounds decent to me. *shrug*

There you have the Big 3 Greatest Gavins. These are all on-card autos, not stickers, which is nice.

It's interesting to me to see how other Gavins sign their name. Floyd's got the fanciest signature, while Cecchini gets some style points, at least. I sign "Gavin" probably somewhere between Floyd and Escobar.

While I won't go nuts with Autogavphs, I'll keep an eye out to possibly add auto cards of other Gavins besides these 3 guys, and may get more of these same Big 3 if I come across cool-looking cards of them at a good price. And of course, if you've got any to trade, drop me a line.
Posted by defgav at 8:21 PM