I won this card a few days ago and it arrived today: 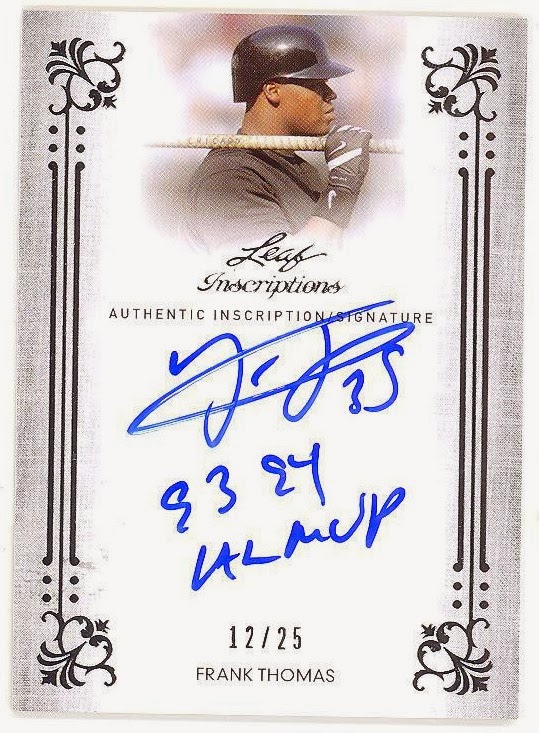 Nice! And to receive it on the very day he got elected to the Hall of Fame.. that's some excellent added coolness to it for me to treasure.

As I've mentioned in the past, 1990 was the year I first began collecting baseball cards. Frank Thomas draft pick cards from Topps and Score from that year were among the earliest highlights of my collection. Seems like Thomas was the first HOF superstar whose career I was "on board" with from the get-go, so he'll always have a sentimental spot in my heart/collection.

A few months ago, I finally realized a childhood dream by picking up Frank's beautiful 1990 Leaf rookie card (I went ahead and got the complete set.. it's always been one of my favorite sets, though out of my reach as a kid.) Really my only collecting hankerin' (I'm not crazy about the term "collecting goal".. feels like I'm trying to meet some corporate quarterly report)-- my only collecting hankerin' left for Frank was to pick up a certified auto at some point. This beaut from 2013 Leaf Sports Heroes does the trick nicely, plus what really got me to pursue it was the fact it's a Christmas Card (#'d 12/25)! On-card auto. The jersey number is a nice touch the Big Hurt seems to include on just about all his autographs. I love the sloppy inscription, touting his back-to-back MVPs. And the strategic photo selection helps you overlook the missing team logos.

I do not own the below card, but I'm posting it anyway to talk about it. This is an active auction, and while I do have a sniping bid pending, I expect to be outbid by a wide margin. The eBay seller was pretty smart and scheduled it to end the day after the HOF announcement. 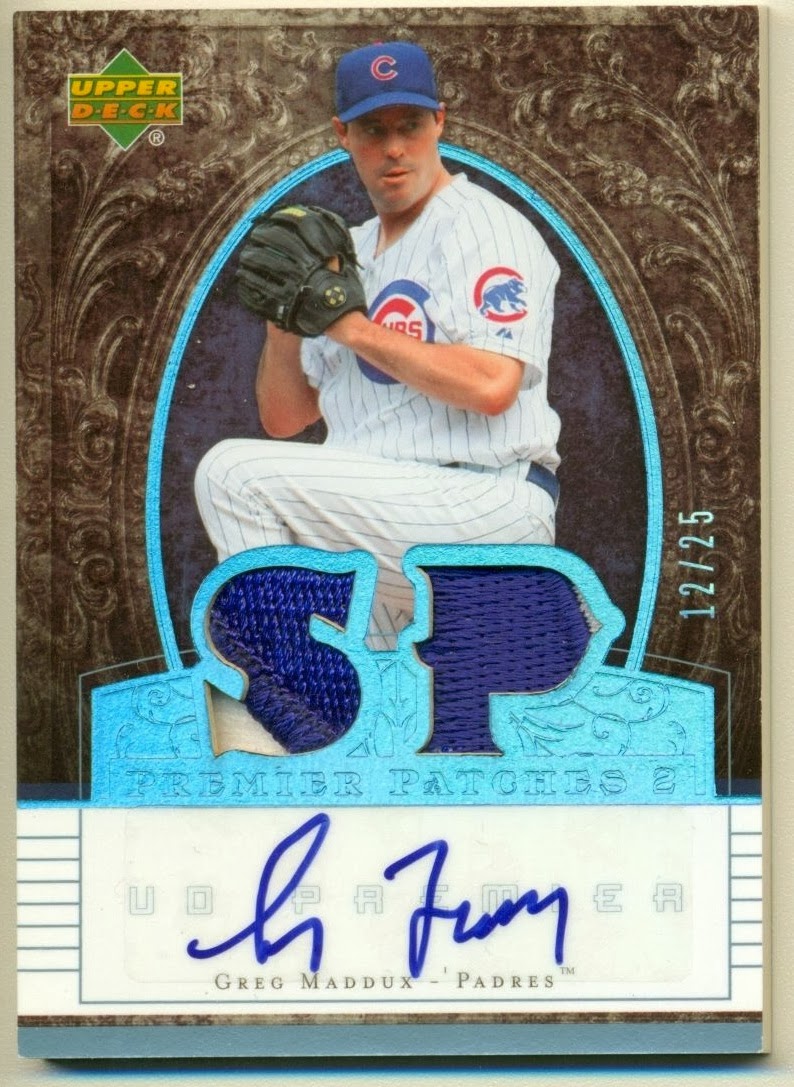 Greg Maddux seems to have very few certified autos out there. Not sure why, but hopefully his call to the Hall changes that. I'd love to win this card. Not only is it a rare certified auto from arguably the greatest pitcher of an era, but it's also a Christmas Card! Ooh-da-lolly! And on top of all that, it's kinda a Padres card.. listing the team on the card, though the photo shows him in a Cubs uniform.

But can we talk about that signature?? For a guy who had masterful control with a baseball, he could sure use some work with his control of a pen. That scribble doesn't look anything like his name. Looks more like it reads "Im Fuzzy". OK. Thanks, Fuzzy, nice to meet you. Frank Thomas' signature ain't no work of art, but at least you can pick out 2 or 3 letters in his name. Fuzzy, here, not so much.


As for Tom Glavine, well, I like him just fine, but never really collected him all that much. I've got junk '88 RCs of him, I think from all 4 major sets if I remember right, but that's about it. If I saw a Christmas Card of him for a good price, I'd probably jump on it. But then again, I'm a fool for Christmas Cards.

Anyways, congrats to Frank Thomas, Greg Maddux, and Tom Glavine. I'm a little bummed voters continue to be stingy with who they elect in recent years (Bruce Sutter is in but not Lee Smith? McGriff! etc etc), but oh well. You can't argue with the worthiness of these 3 guys.
Posted by defgav at 5:00 PM