Baseball Card Mashup is a feature here where we take popular cards and mix them around via Photoshop in ways that may very well hurt your brain and anger your sense of reason. But maybe, just maybe, it'll make you think, and open your mind a little. Perhaps even make you a better person.

For this hotly-anticipated second installment, we'll be having some "what if?" fun with the Ripken family. 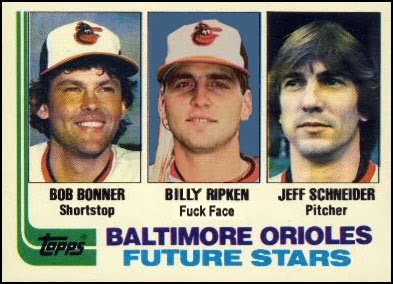 Imagine how embarrassed Topps would be if they let this card slip by their Quality Assurance department! That'd be quite a blunder, indeed!

And how about this alternate reality..? What if that infamous '89 Fleer card wasn't Bill's, but Cal's? 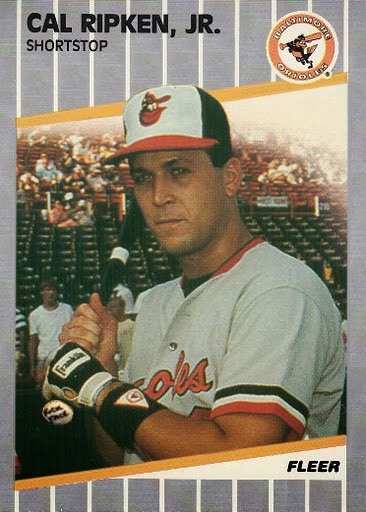 I'll bet at the very least, Cal would have needed to take a game off to do some damage control, thereby never eclipsing Gehrig's record. Fans might have turned on him and he likely would have spiraled into a deep depression and been out of the game by 1990, to soon be all but forgotten, except by card collectors who remember him only as "the Fuck Face card guy."

But enough obscenity and dystopian visions, let's end on a sweet one. Here's a nice family shot for Ma Ripken. 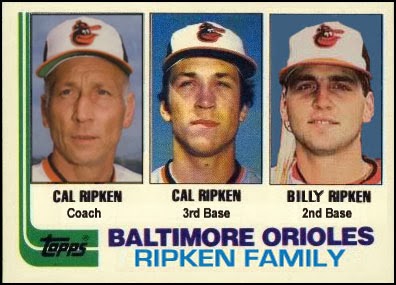 Thanks for taking this strange trip with me. See ya next time.
Posted by defgav at 4:28 PM