One thing I'd like to do more in 2014 is scan/post my Player Collections. This helps me keep track of which cards I have, plus is handy for prospective trade partners to check which cards I need.

A couple blogs I follow wished the great Bill Madlock a happy birthday back on January 2nd, but looks like that was due to a typo originating from baseball-reference.com. All his baseball cards and his Wikipedia entry list his birthdate as 1/12/51, not 1/2/51. (Somebody should alert them to the error. Anybody?) Happy Birthday, Bill Madlock!

For me, Bill's a lot like Dick Allen: A couple badasses from before I followed baseball. Neither played for my hometown Padres, but have become guys I collect, mostly due to the fact that I got their autographs in person when I was young. Back when I posted a rundown of my Dick Allen cards, I lamented getting Dick to sign a ball, then letting it slip away over the years during my time away from actively collecting. I got Bill Madlock's signature, I believe, at the same event, 1992 All-Star Fanfest, though I could be wrong about that. But unlike a bulky baseball, I had Madlock sign a slip of paper. Since a small piece of paper is a lot easier to store/move than a baseball, I'm happy to report I still have the very autograph Bill gave to me as a kid. 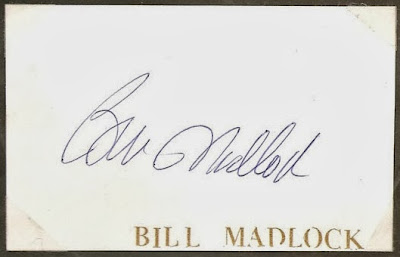 Too bad it's just a boring slip of paper, not a card (though the gold leaf name label I added afterwards is a nice touch), but I don't think I owned any Madlock cards at the time, or if I did, I didn't bring them with me that day. Still, though, I love this. It's one of just 3 baseball-related items I still own which I personally had autographed in person. The others are a piece of paper from mystery Indians coach from the early 90s (I posted about this months ago.. still no one has been able to help shed any light on who it may be), and the only card I ever got signed in person, a Padres back-up catcher who had a brief career in the majors (I should do a post on that one someday).

Anyways, I've since gone on to collect a bunch of Bill Madlock cards. He has too many out there for me to pull the trigger on "supercollecting" him, but I'll at least try to complete his flagship playing-days cards from the major sets, plus occasionally add a modern card or oddball to the collection.

Last time I did a "player collection" post like this, it was coincidentally Dick Allen (part 1, part 2). It took me a long time because I scanned both fronts and backs, plus typed up a little blurb for each card. This time I'm going to go an easier route and just scan the fronts, a flatbed-full at a time, and leave it at that. If you can fill any holes and want to trade, feel free to get in touch. 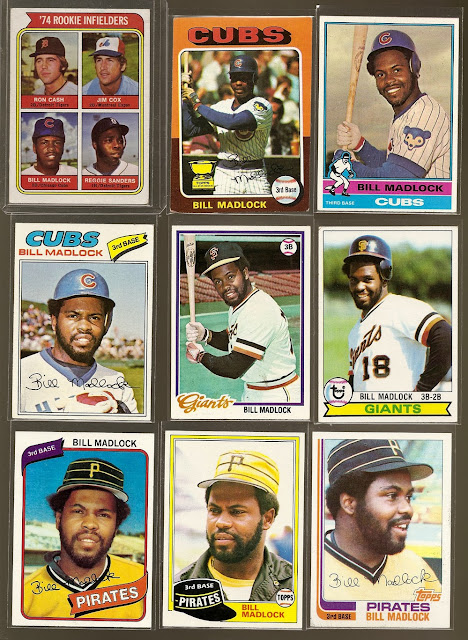 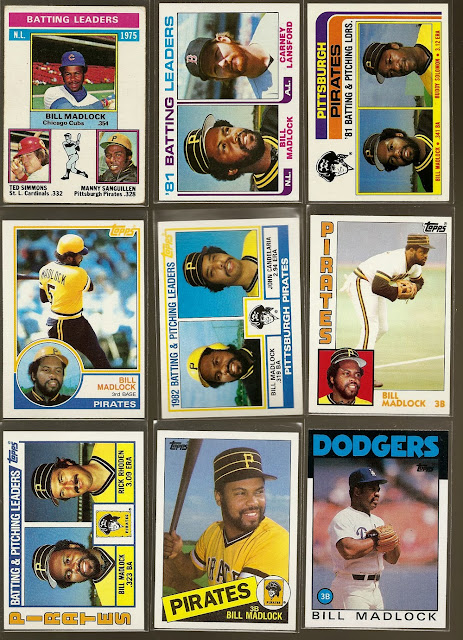 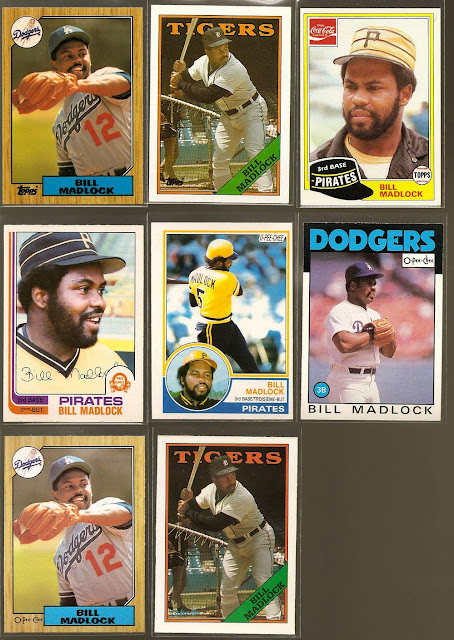 Looks like I've got a complete Topps base player card run, though that 1987 card is actually the tiffany version. I mistakenly thought it was a dupe and gave away my regular '87 Topps Madlock in a contest (Cards In Odd Places.. he was riding my dog, Annie, remember?). Oh well, I'll pick up another one one of these days. Oh, and I need his '75 mini. And '87 Traded.

He's also got a Batting Leaders card from '77 shared with George Brett that I need, and one from '84 shared with Boggs. Possibly more "team leader" cards out there too..?

Those near the bottom are OPC, as you can tell if you take a close look. Still need quite a few OPC Madlocks, especially from the 70s. 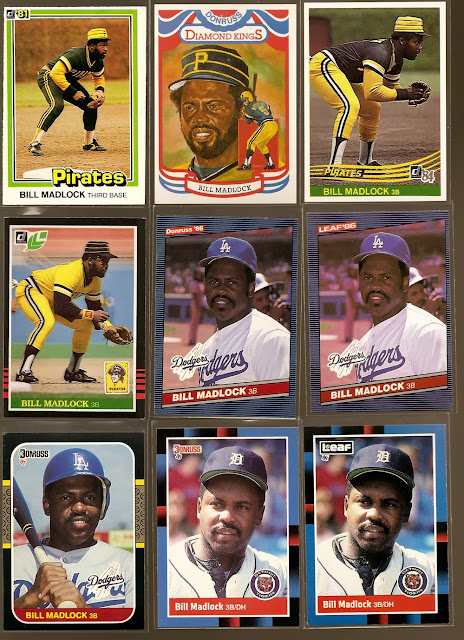 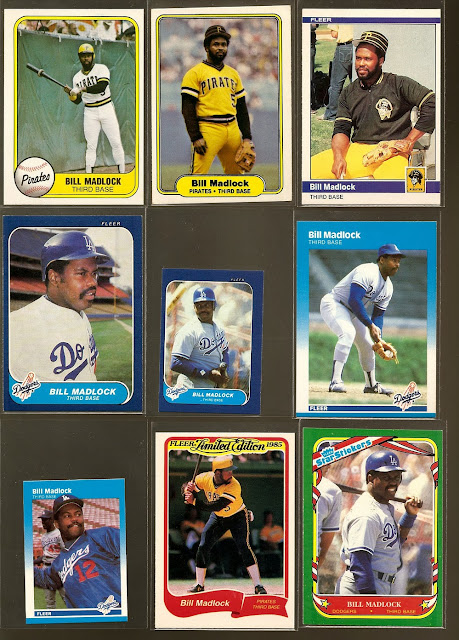 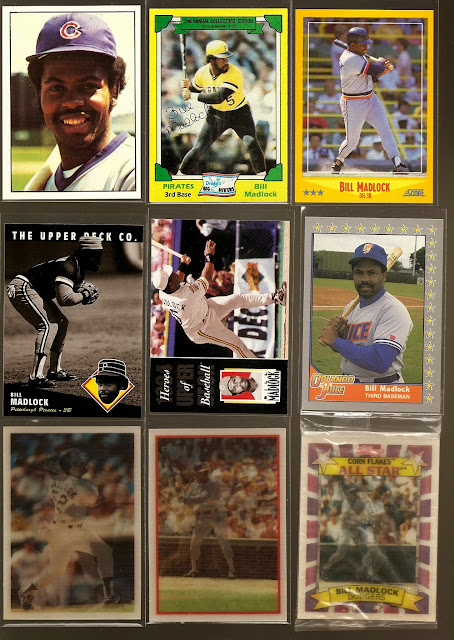 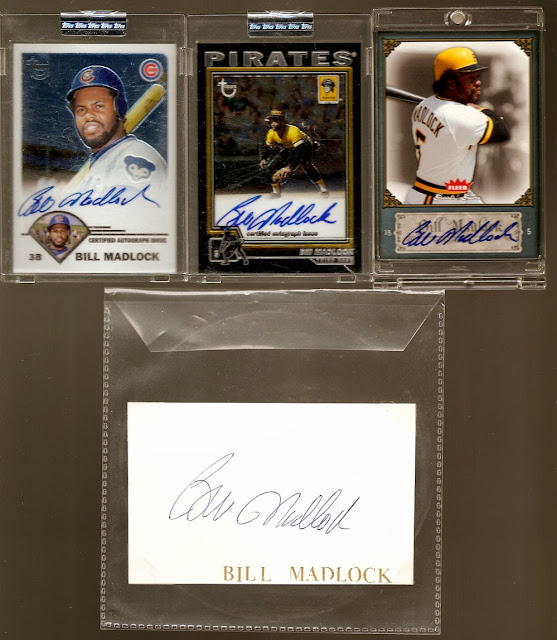 That middle 2004 Topps Retired is thee card that got me hooked on that set, winning it off Listia while building my Madlock collection. Fell in love with the design and went on to sink a large chunk of money collecting other autos from the set.

While not a Hall of Famer, Bill seems to get lots of love from card companies these days, frequently popping up in "old timer" sets and inserts. He's a fairly prolific signer, so there seem to be many certified auto cards of him out there. I have no great desire to get them all, though if I was offered one I didn't have in a trade or stumbled upon one cheap, I'd probably jump on it. 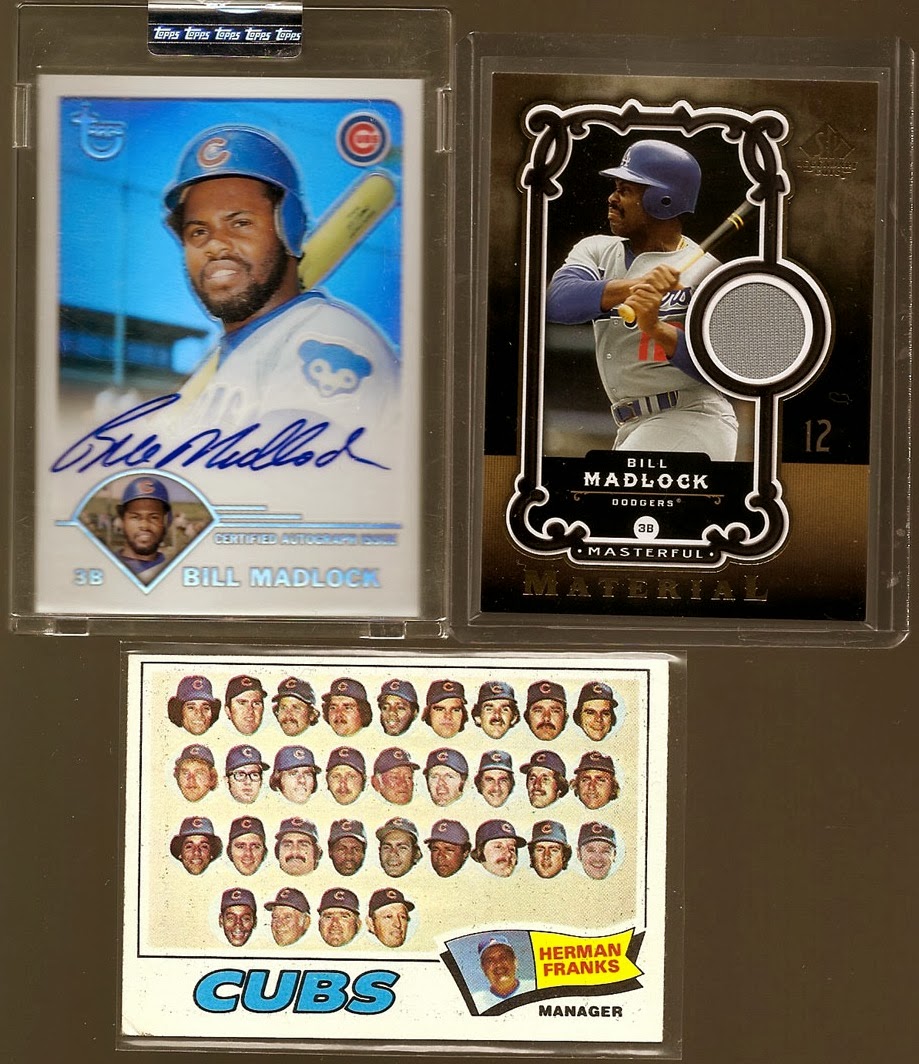 A couple firsts for the collection! Just got my first Mad Dog relic thanks to a recent trade with Fuji. And my first Madlock refractor: The 2003 Topps Retired refractor parallel is #'d 7/25. (My scanner doesn't do refractors any justice [or cards in thick cases], but to see it "in action" check out yesterday's post.) It's not the "Christmas Card", but the "Lucky Card" is my next most-desirable serial number, I suppose. I still have an eye out for a '04 Retired refractor. There was one on eBay I almost went after, but it's #'d 13/25.. and I do my best to steer clear of the "Unlucky Card" serial numbers. Yeah, I'm weird about numbers sometimes.

As for the team card.. it's a tricky question for player collectors: Should team cards featuring the guy go into the PC? I haven't definitively answered that question for myself, but since this "floating heads" Cubs card clearly has Bill identifiable near the center, I figure I will count this as "a Madlock card". If it were a distant team pose shot where you kinda have to guess who's who, as most team cards are, then I probably wouldn't count it.

So there you have my Bill Madlock cards as of right now. As always, I'm up for trades for any cards I need. Thanks!
And again, Happy Birthday, Mr. Madlock!
Posted by defgav at 8:21 AM