Down to single-digits with my 2004 Topps Retired auto needs!

I mentioned last week that I finished off the base set, but I still have some big autos left to throw large sums of money away on hunt down.

Since my last post on the subject, I've "upgraded" 5 autos to lovely refractors: 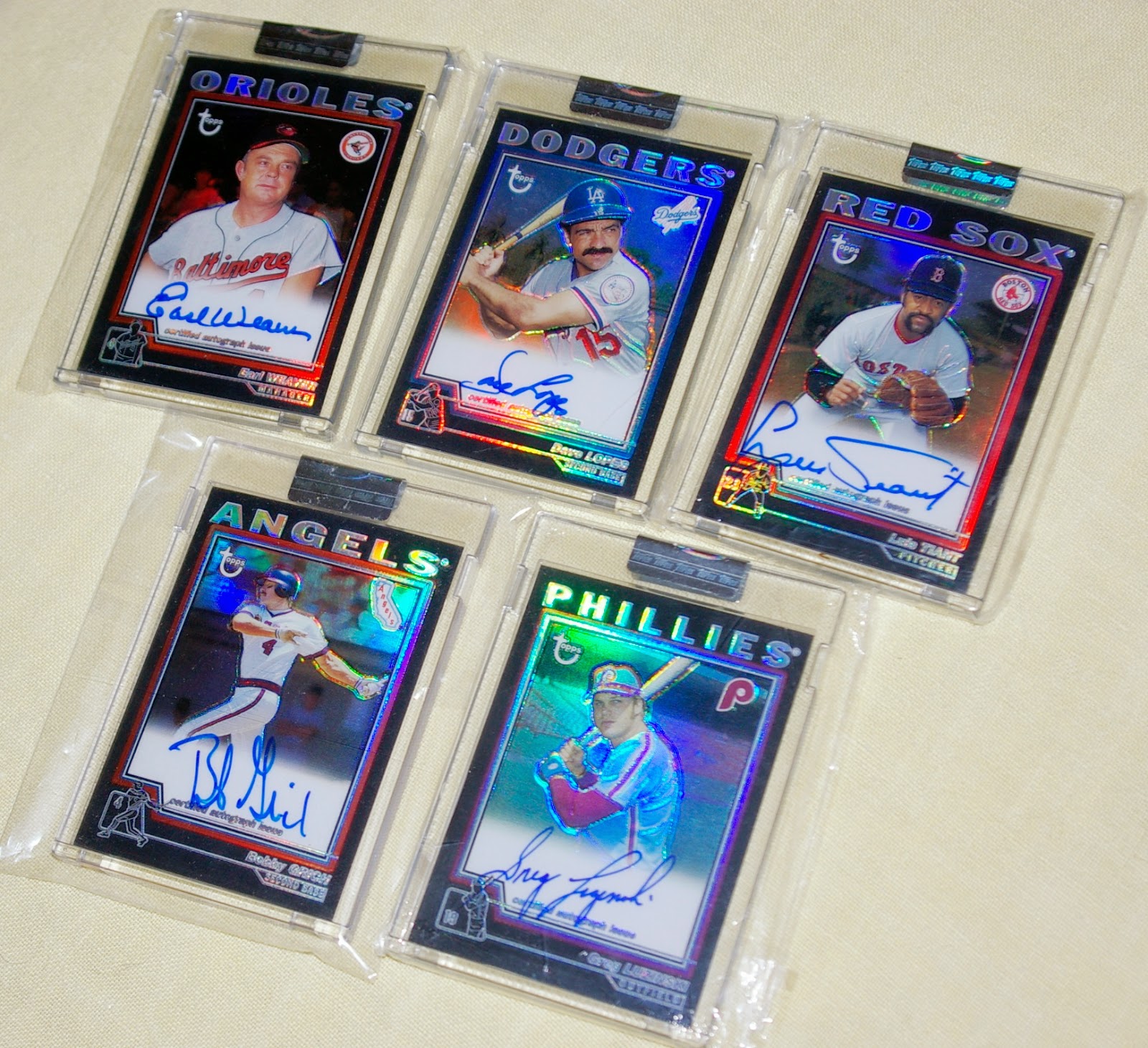 There are only 25 copies of each of these refractors in existence. As pointed out recently at the Underdog Card Collector, today's high-end sets will have parallels numbered to 25, and then have nearly identical "different" parallels numbered to 10 or something, then another nearly identical parallel numbered to a bigger number such as 999, rendering the serial numbering on all the cards essentially meaningless. But back in 2004, at least with this set, when Topps said there were 25 copies of a card made, they meant it.

I'm especially happy with the Earl Weaver because it's the Christmas Card (#12/25!) and was won relatively cheaply.

And though I probably should stay away from non-refractors since deciding I'd ultimately like to collect a set of all 76 auto refractors (and once I upgrade to the refractor, I no longer need the base auto in my collection), it's still hard for me to stay away from a card I need when the price isn't too ridiculous.

Here are 2 I've checked off the list since last time: 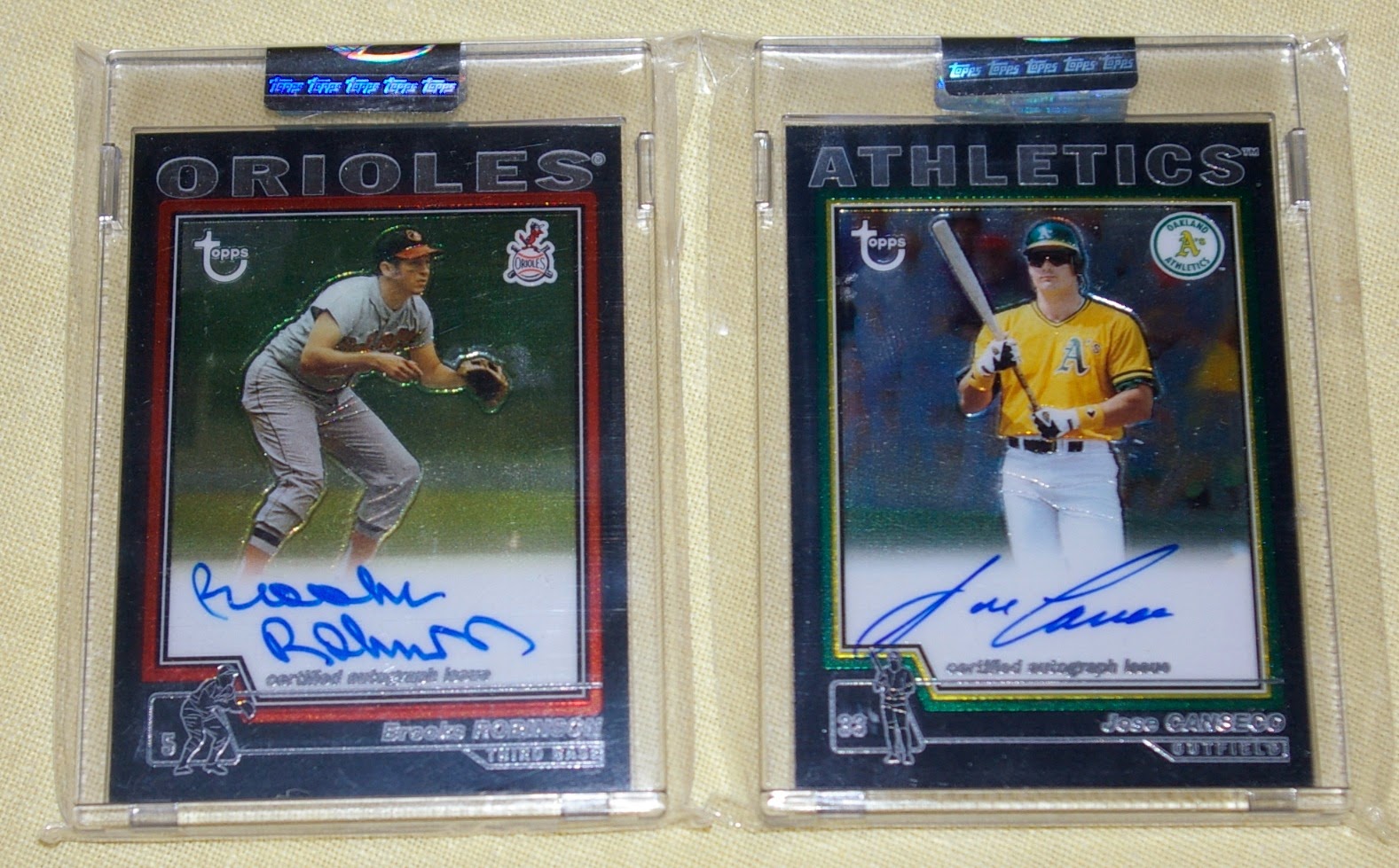 Love that Brooks. The Hall of Famer just celebrated his 77th birthday recently.

My latest addition, the Canseco card had been elusive. In recent weeks, I think there was a graded refractor in a lot that went for well over a hundred. There were a couple buy-it-now's for around $30-35 that I missed out on, only to discover browsing completed auctions after the fact. There's one currently up for $199 or best offer that's been there a while now.. I made him an offer of $50 and he turned it down. I'm glad he did, because a couple weeks or so later I lucked out on this one with a low opening bid and won it for under $30, perhaps aided by eBay screwing up the thumbnail photo in the listing.

After reading this post, I kinda assume all Canseco autos out there are counterfeit, but here's hoping this one's legit.

As an aside, I'd like to say I'm very envious of 6,000,000 Cards and Counting's ability to crank out gorgeous hard-copy customs-- even refractors and acetates!-- and if I had the skills/equipment, I would undoubtedly be making myself a ton as well. But it kinda worries me when a regular guy can print out a professional grade card that could pass for the real thing. In the wrong hands, that could really F-up the hobby. Who's to say that hot superfractor you see on eBay isn't just a reproduction some guy spent a few days getting to look just right? Even holograms that once "guaranteed" Upper Deck cards were authentic, and these days get slapped on the back of some select higher-end Topps cards, are no longer foolproof as printing technology continues to improve for home users.

It sounds silly, but it's a legitimate prediction that were not too far off from embedded microchips in hit cards to be able to track them and ensure authenticity.

Not to hijack this post into a "state of the hobby" rant, but for a 30-something guy like myself with no kids to pass my cards onto or any appreciative beneficiary like that in place, the thought of my collection being some sort of rainy day retirement fund really isn't realistic at this point.

It seems that the majority of serious card collectors are a few years older than me. The few younger collectors out there are usually more interested in the big hits, often football or basketball, with baseball continuing to lose market share as America's Pastime. Not to be too morbid about it, but thirty/forty years from now, a lot of collectors will be dropping off, with a smaller next generation of collectors remaining to take their place. The supply and demand shift should make a lot of classic cards more affordable, on the bright side. Add to that dwindling interest in baseball and the ease of counterfeiting cards on the average home computer, the future investment potential for cards is pretty weak.

So, as anyone reading knows, be sure you're collecting because you love it, not for financial gain.

But yeah, I'm no expert and I haven't done any research.. just my disjointed, rambling opinion. Spending a bunch of money on this particular collecting goal of mine makes me think about stuff like that, I guess.

It would be a cool turnabout, though, if I were able to sell off my Retired autos when I retired, and pay a month or two of rent/mortgage/bonerpills/whatever with the money. We'll see how life shakes out. Maybe I'll request that the cards line my coffin. That'd be sweet, actually. ..though the refraction would be useless with no light in there. Maybe I could be cremated with the cards, giving my ashes a sweet rainbowy sparkle when scattered.

I'll leave you with some more pics of these photogenic cards. 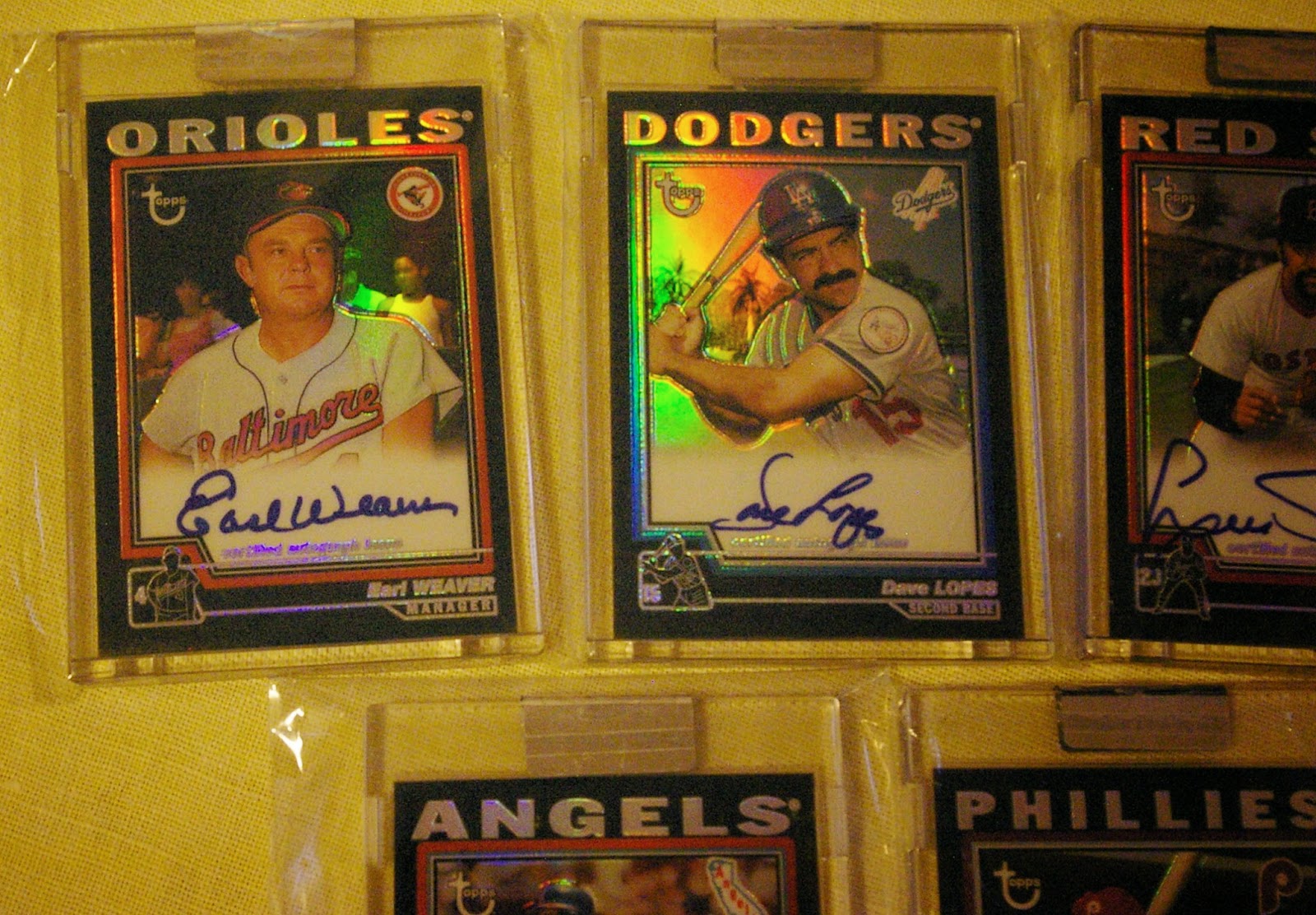 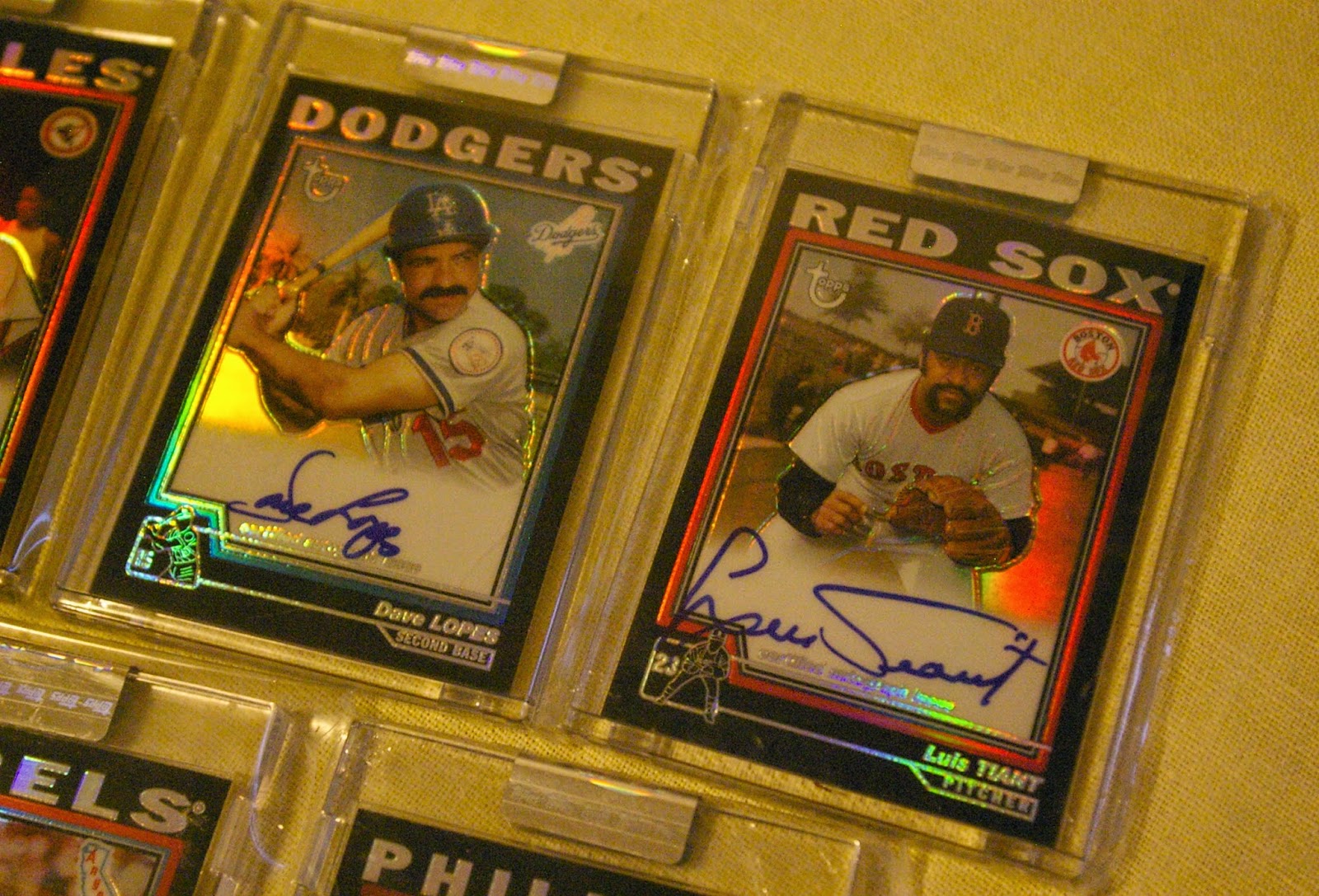 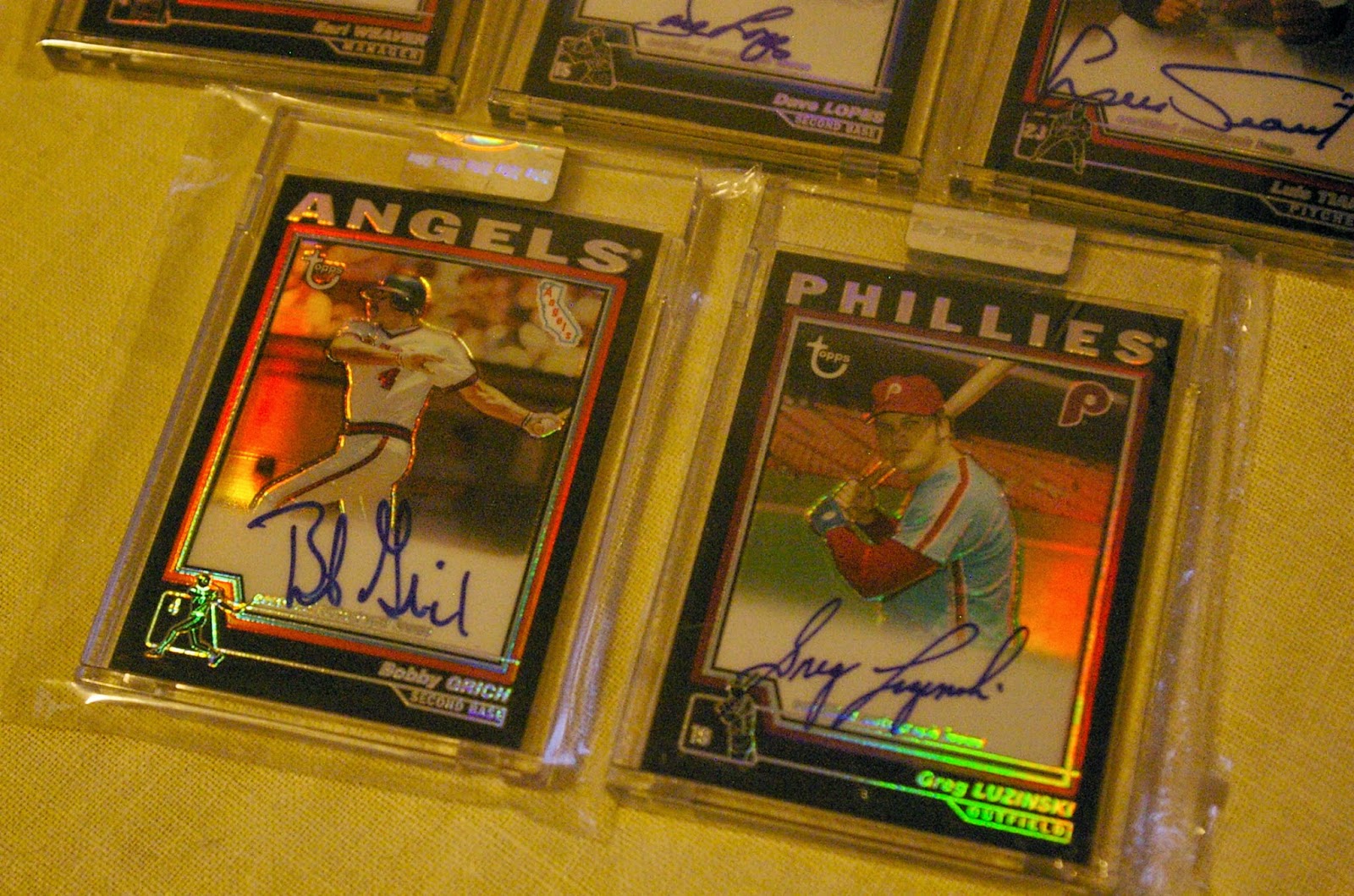 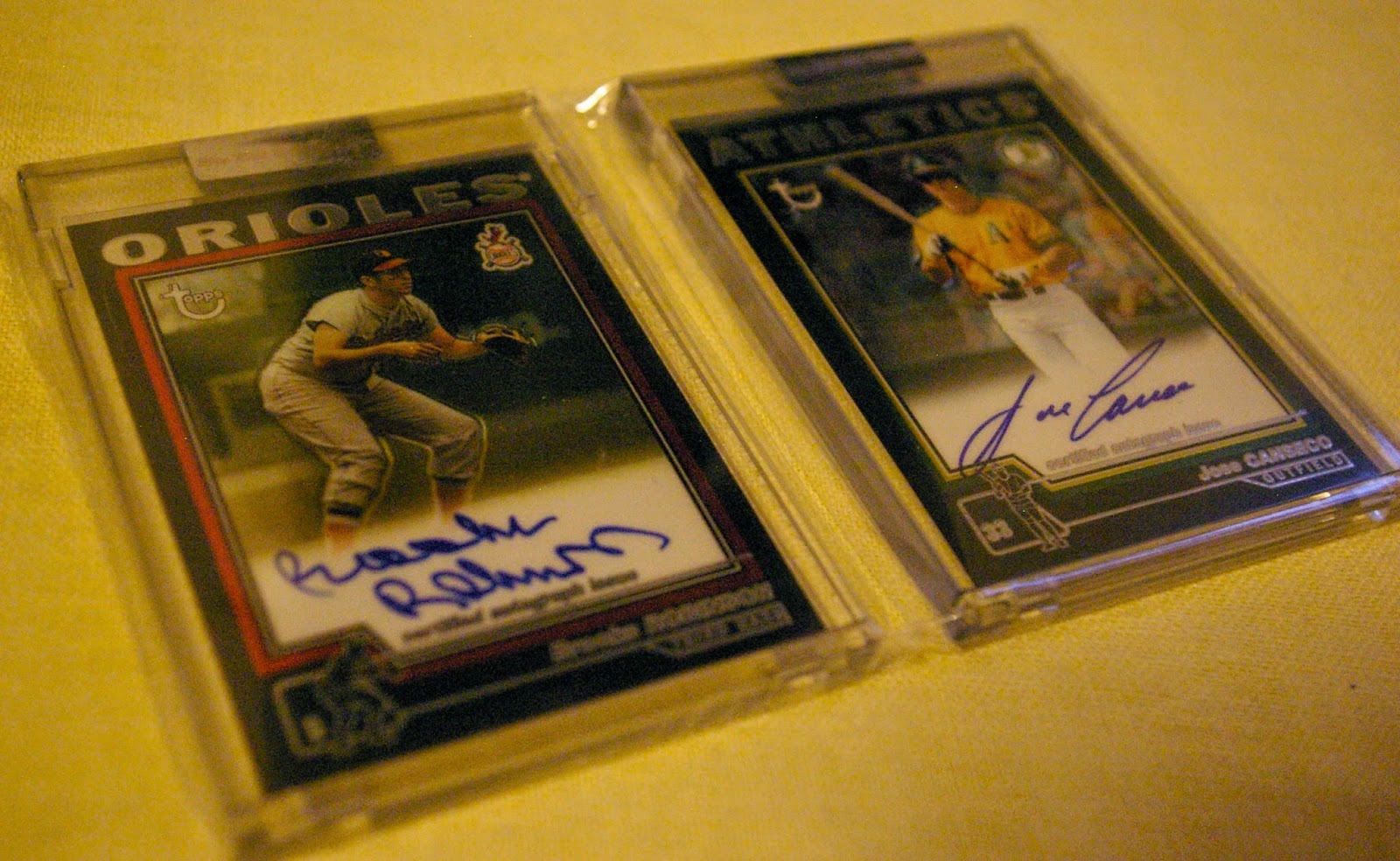 Thanks for stoppin' by.
Posted by defgav at 3:56 PM