[Some 80s toys have been breaking my 2014 Topps Archives hobby box in a battle royale.]

At the conclusion of Episode 1, the Decepticons had just taken the energy pod into deep space.

Episode 2 opens on the forest moon of Endor, where Soundwave has taken the energy pod to keep it safe while he ponders how to best harness its power for galactic domination. 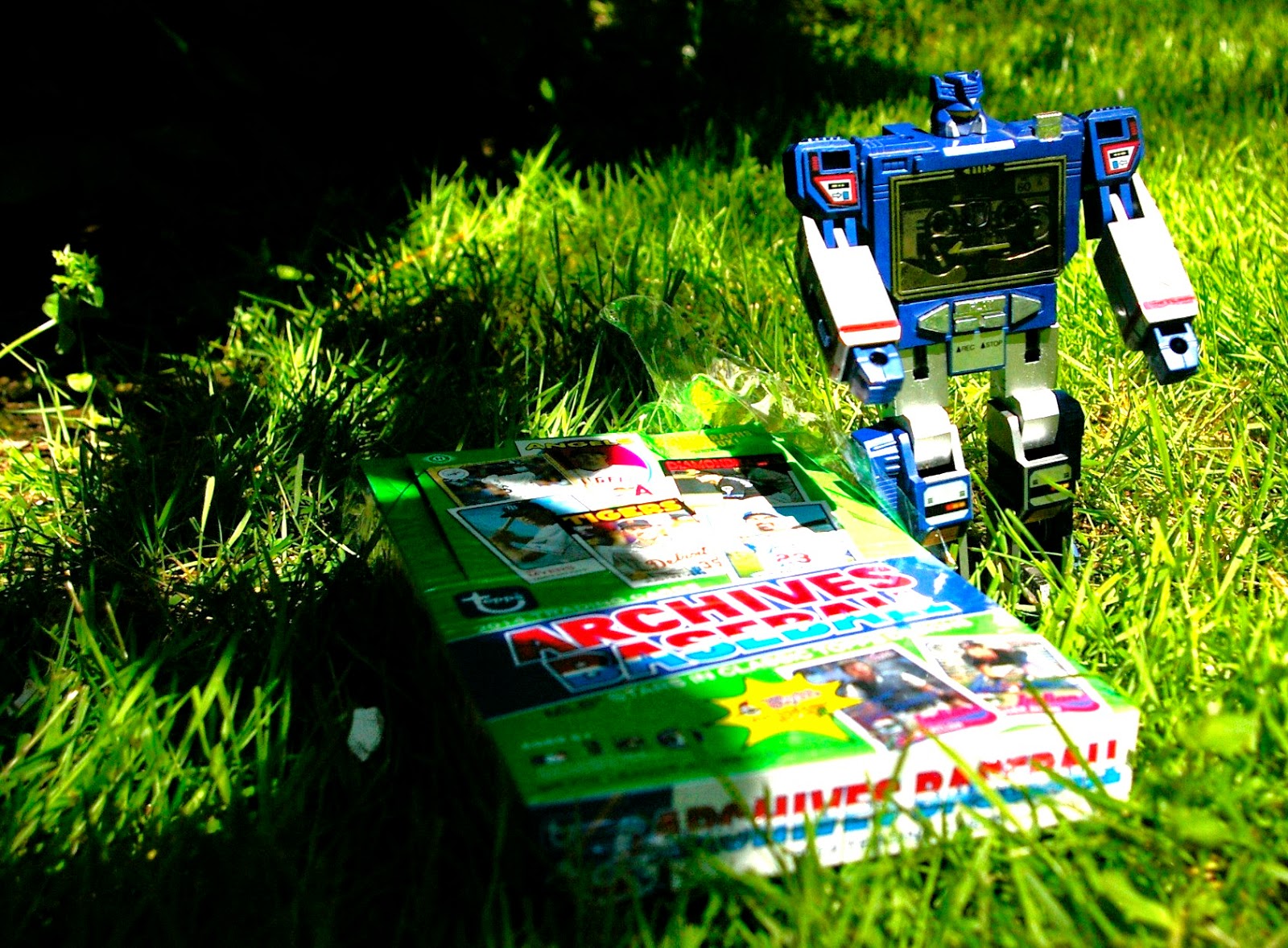 Of course, if you're chillin' on Endor, you're gonna have Ewoks up in your shit before long! 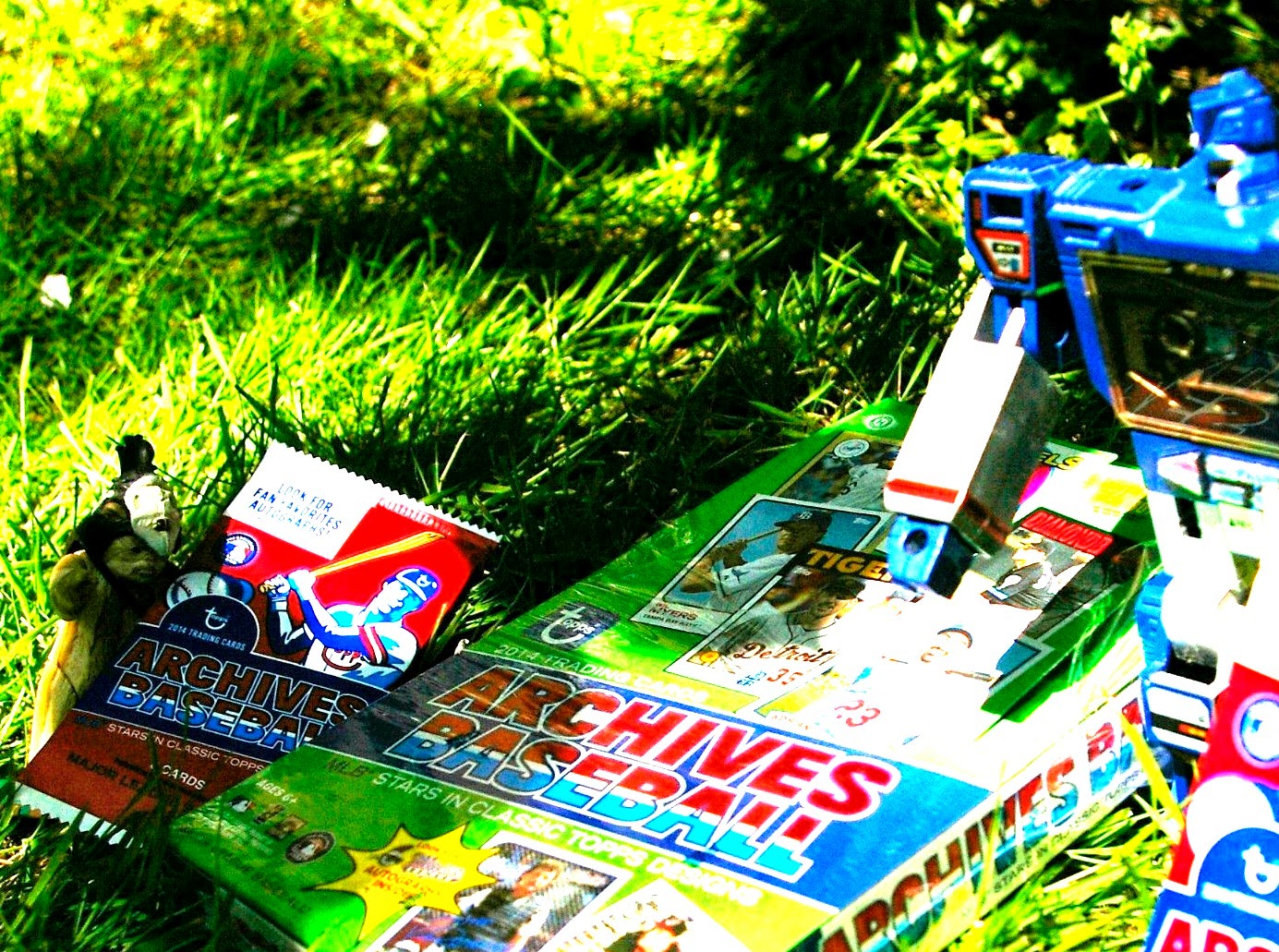 An Ewok grabs an energy packet from the pod and uses it against a stunned Soundwave. 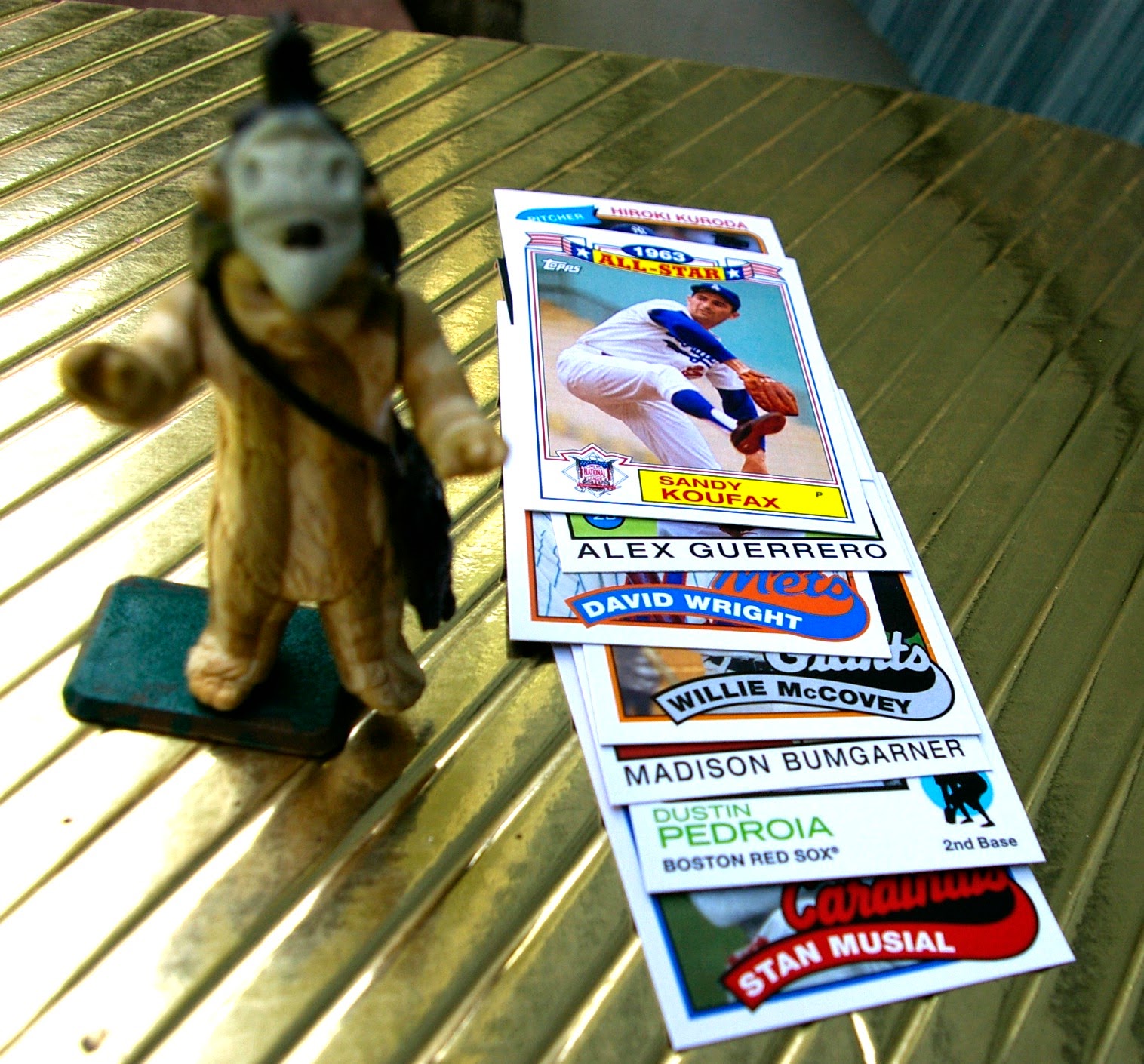 The medicine man Ewok quickly sprinkles a mystic concoction on the packet, summoning some big guns from within, lead by a Koufax All-Star.

Soundwave scrambles to grab a packet himself. 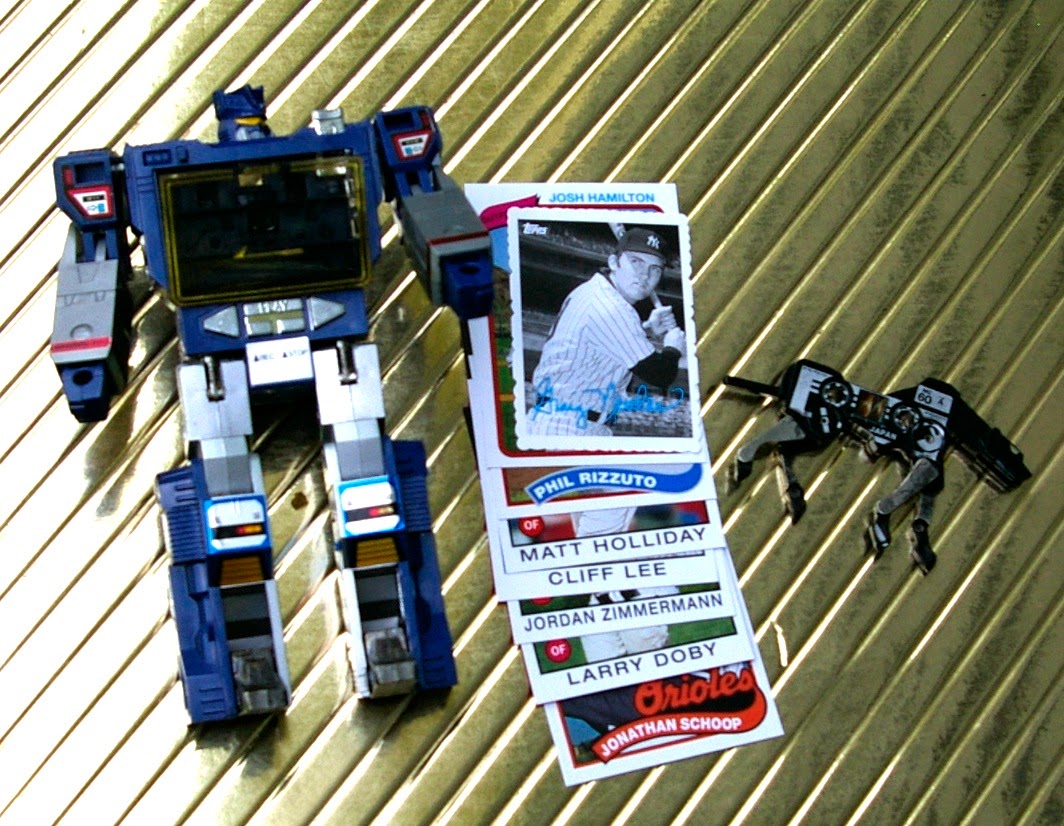 The Ewok just laughs in his annoying high-pitched way as Soundwave fumbles a weak showing behind a Graig Nettles deckle edge.

Soundwave transforms back into a walkman and plays a Smiths song to wallow in his defeated sadness.


The Ewok wiggles victoriously as he and his fellow Ewoks bring the pod to their friends back at the Ewok village as a gift of friendship. 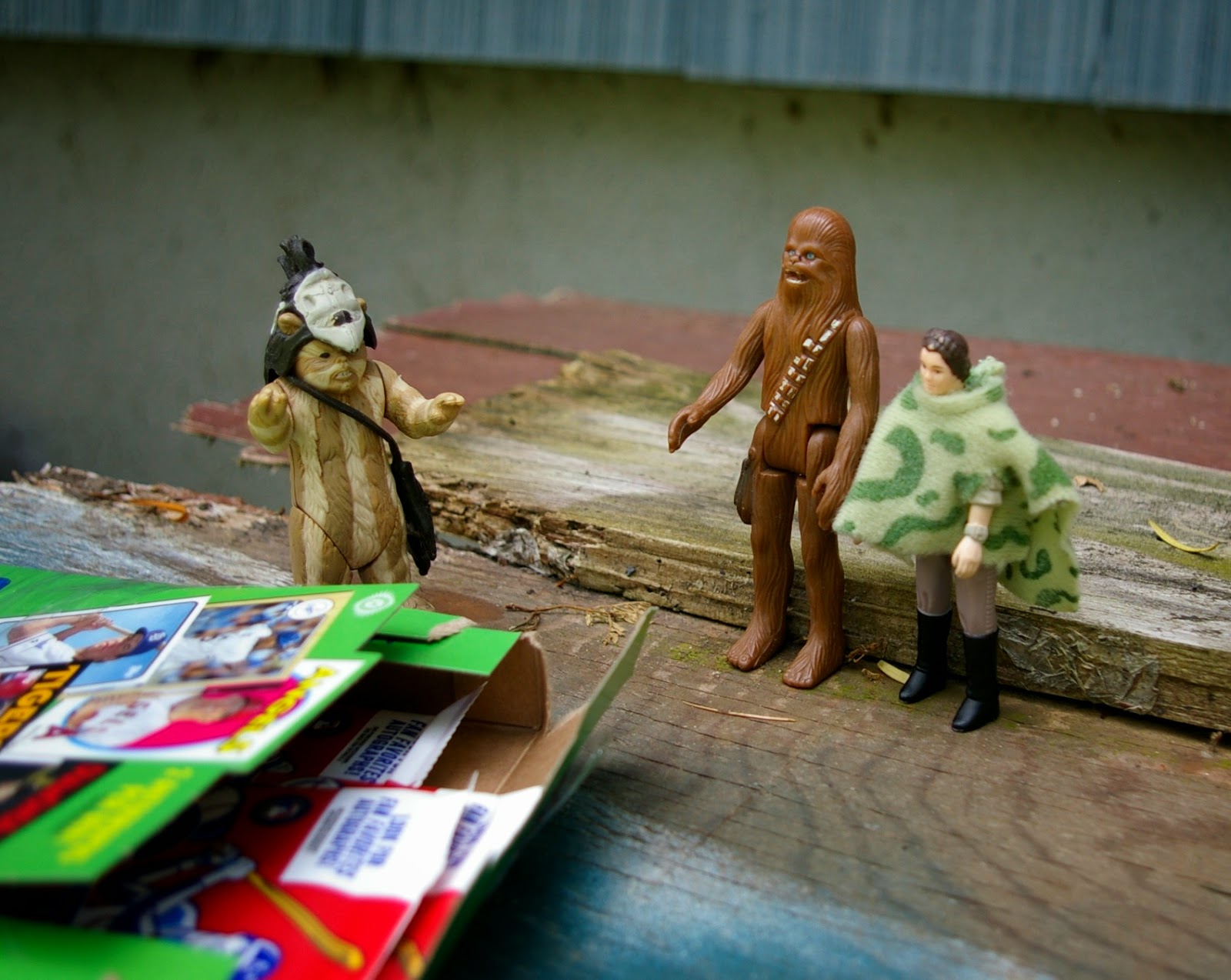 But the feast and fireworks are interrupted by a Lego storm trooper who speeds in and lunges at a packet from the pod. 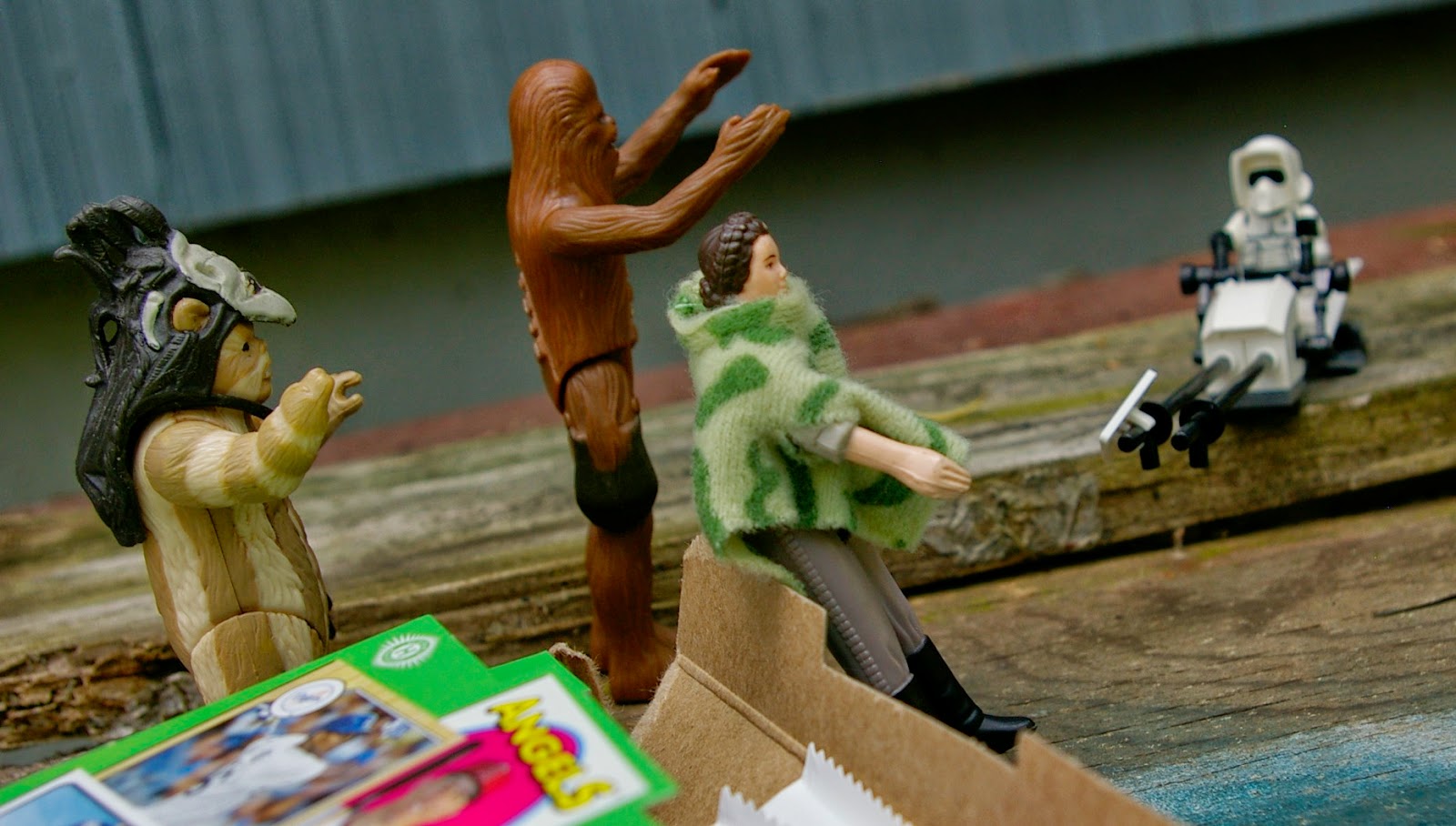 Leia and Chewbacca instantly release a packet against the Lego trooper. 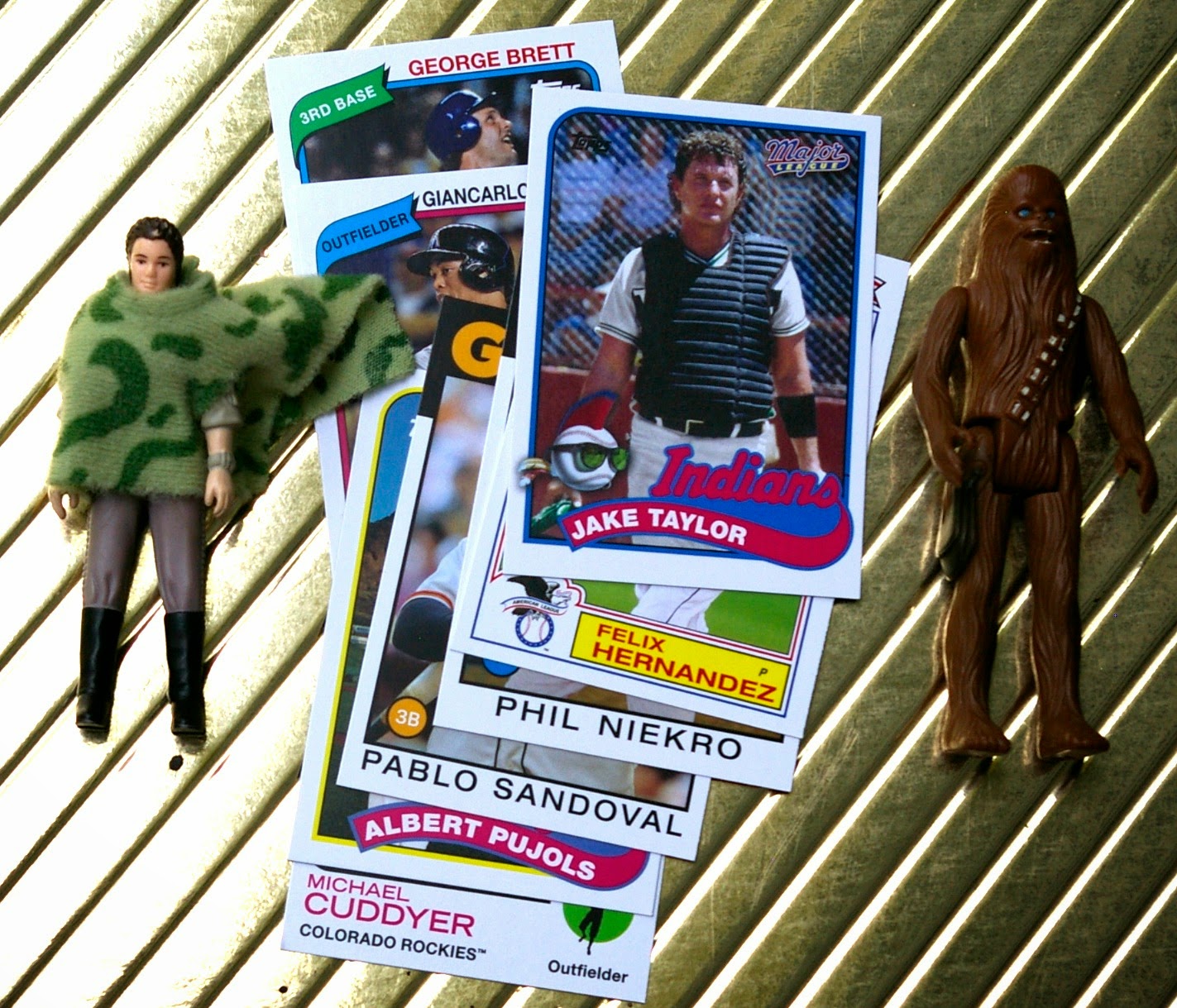 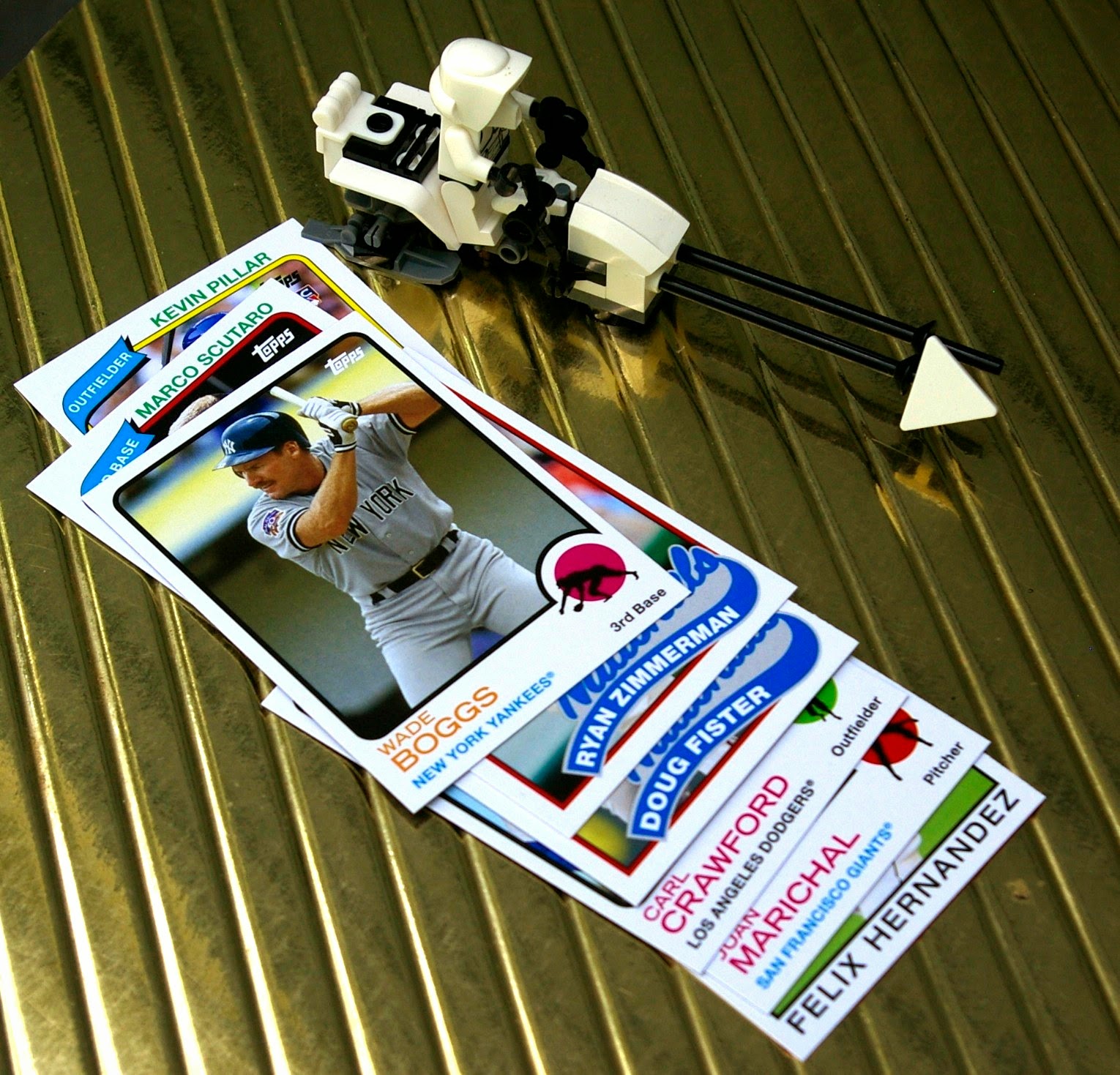 A Wade Boggs SP nearly lands a direct hit but falls short, and the trooper explodes in a fiery death against a tree.

Chewy and Leia realize this pod possesses a power too great to be taken lightly, and radio Luke Skywalker for assistance. 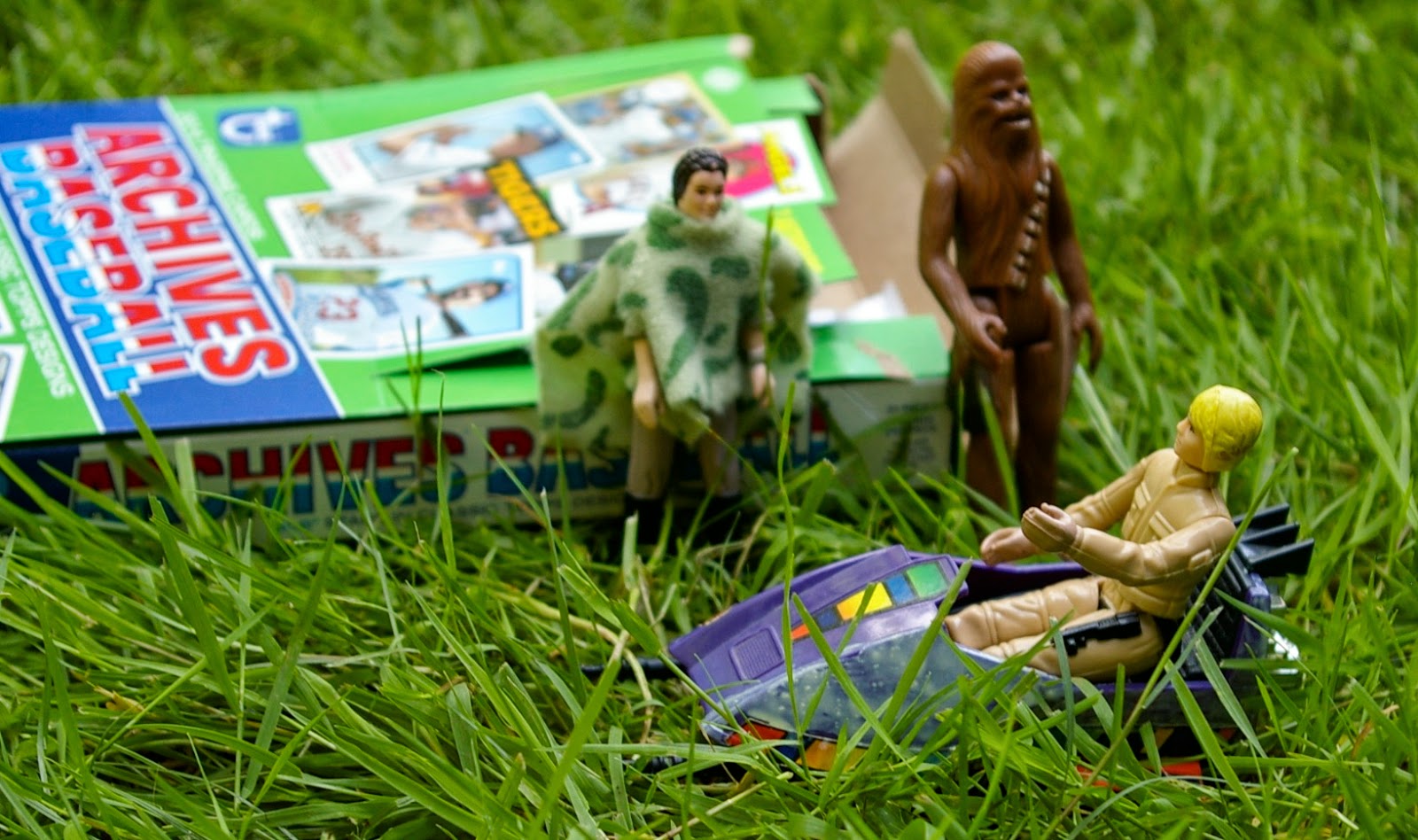 Searching for answers, Luke takes the pod to the Dagobah system. 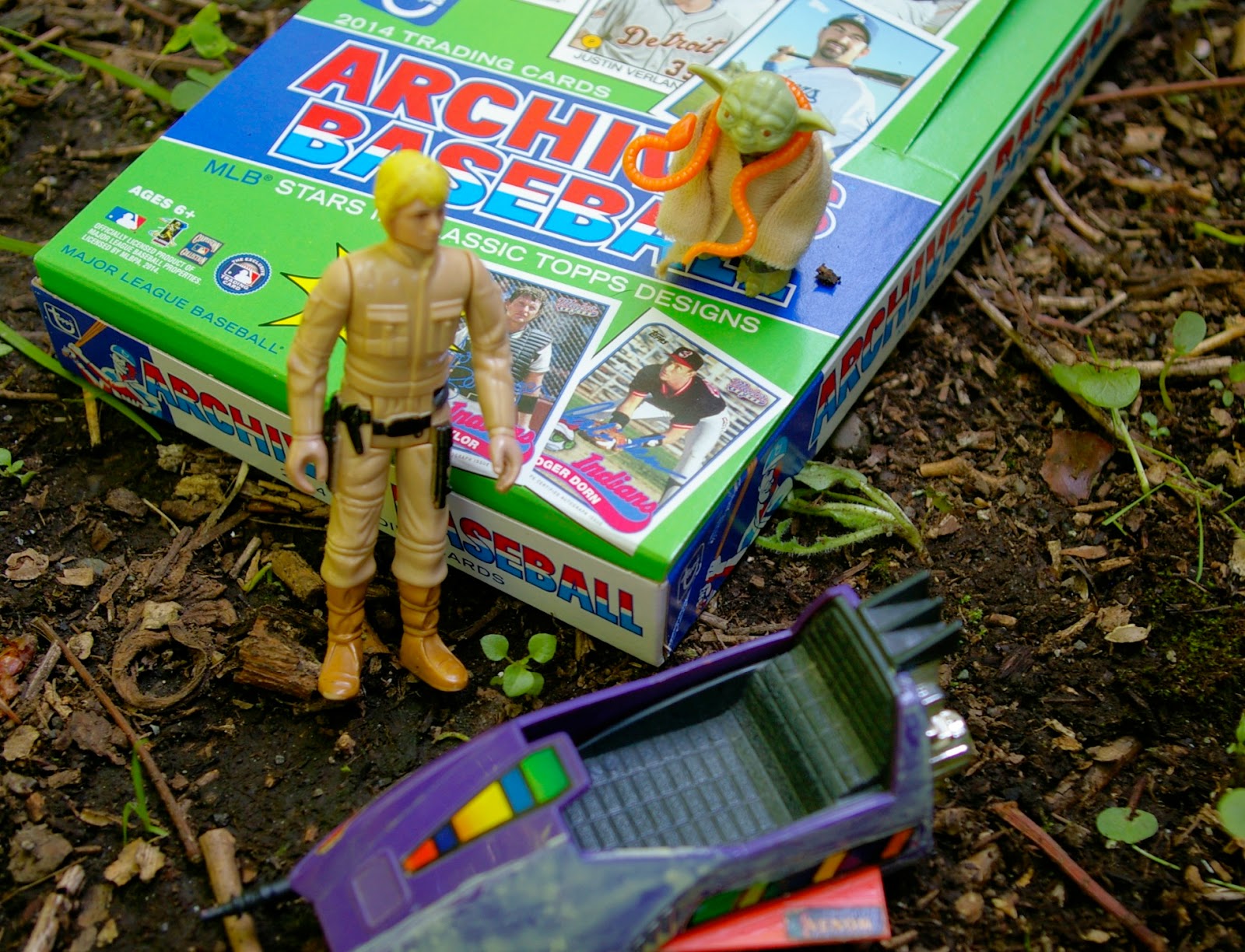 "The force, you must use," Yoda replies.

But what's this?!! Luke had been secretly followed by Boba Fett, who is after the bounty put on the pod by Jabba the Hutt.

Boba Fett flings a packet, unleashing a new type of power.. one not of this sport. 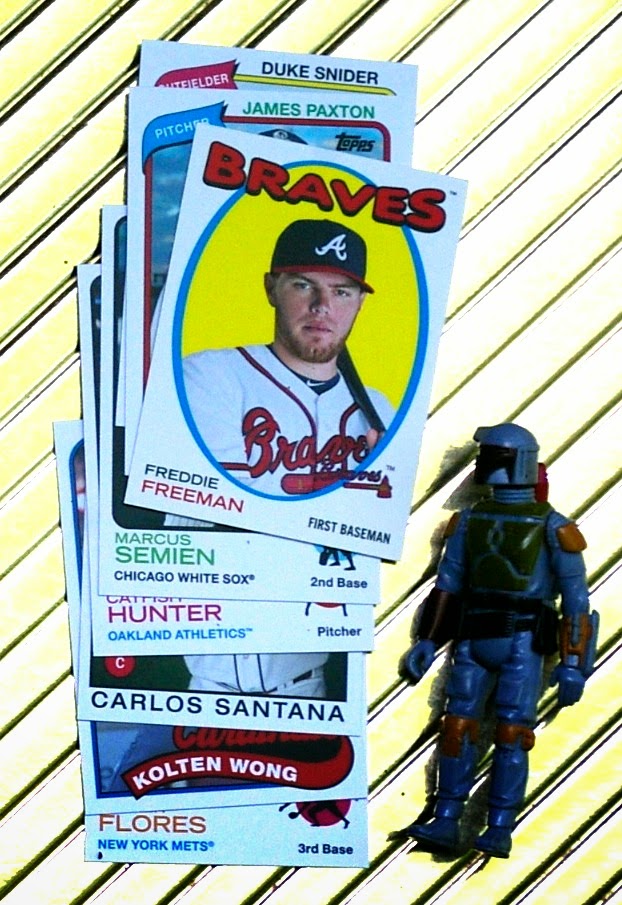 Luke stumbles to use the force while Yoda chokes on his snake. 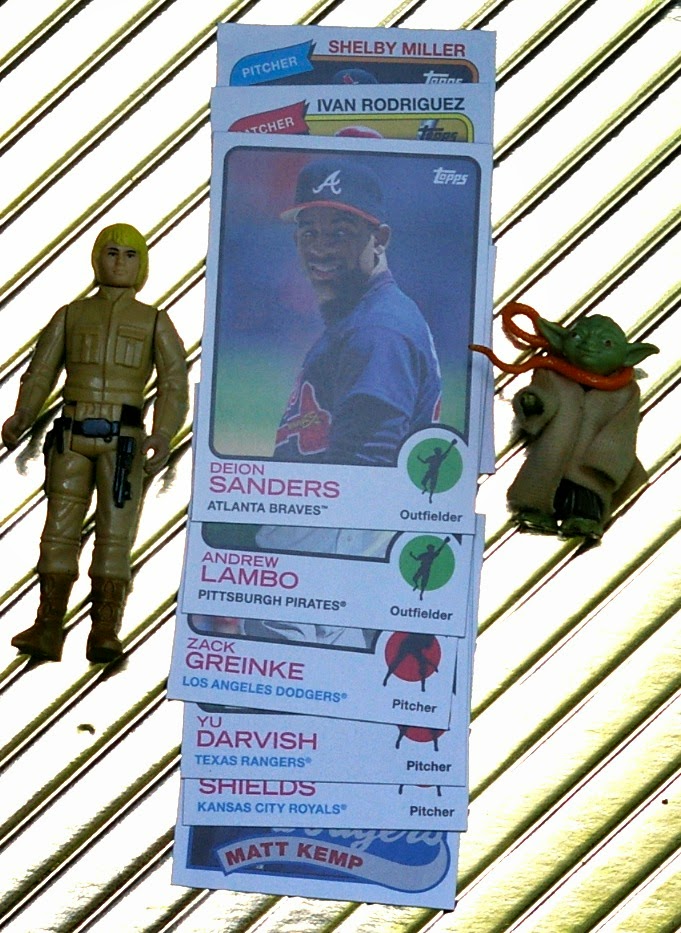 While it might not be pretty, the Deion Sanders SP and his band of ragtag spitfires are just enough to blast Boba Fett into a nearby swamp where he is then eaten whole by a vicious swamp monster.

The battle was so close and intense that Yoda says goodbye and turns to dust moments later.

Luke freaks out, loads the pod into his spacecraft, and sets out to find the one man who could possibly help him.. his only hope.. Obi-Wan Kenobi.