Rod at Padrographs is organizing a little meetup of Oregon/Washington bloggers for lunch on Saturday, May 24th, coinciding with the card show at Mall 205 in East Portland. Should be a lot of fun. I'm definitely not the most social guy in person, but it's always a good time putting faces to names and "talking shop" with guys who have a lot more experience than myself with card blogging and collecting. Plus, it's a pretty decent card show there. I've gone twice so far this year and come home happy both times.

So if you're reasonable driving distance from Portland, you should definitely consider making the trip and getting in on the meetup. Email Rod and/or comment on his post if you're interested.

Hey, speaking of Padrographs, here's a Padre autograph I added to my collection recently: 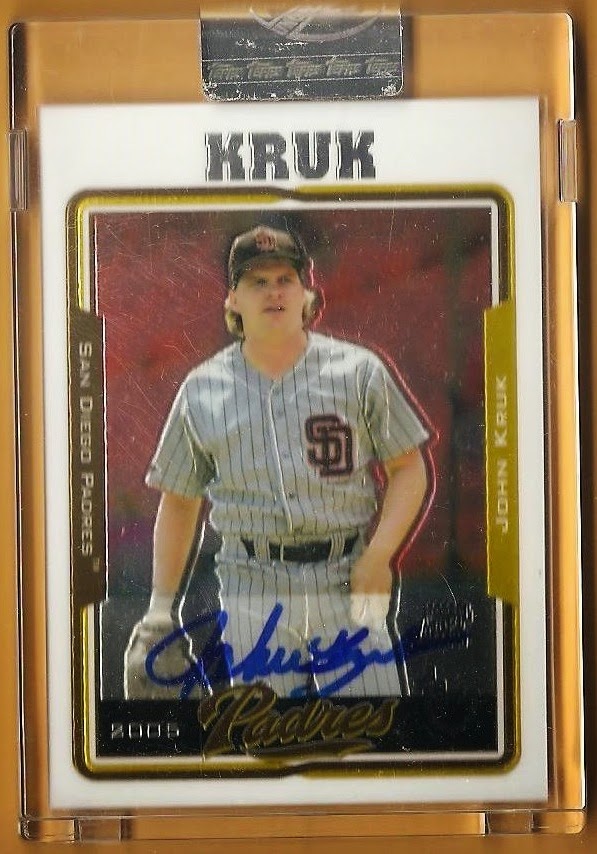 John Kruk was a fan favorite during the first few years of his career till he got shipped to Philadelphia where he spent the bulk of his time in the majors (As such, most of his certified autos feature him as a Philly). Couldn't resist picking this card up when I stumbled upon it at a decent price. Not the greatest photo, but I love those old San Diego uniforms in the years they transitioned from yellow to blue.

Kruk hit .348 in the '93 World Series, but Joe Carter's career highlight kept him from a ring. He retired with an even .300 average, winning people over with quirky quotes and his "everyman" physique. He's kept in the public eye since his playing days by working as a commentator on ESPN, occasionally showing flashes of insight and humor. Seems like a good, down-to-Earth dude. And now I've got his autograph!
Posted by defgav at 5:55 PM