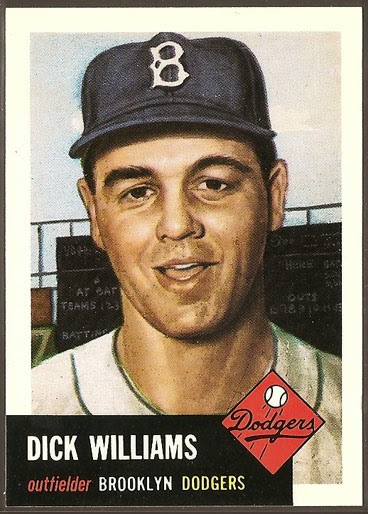 Here's a Topps Archives card I pulled from a pack in the early 90s. I only bought a pack or two of this 1953 Topps reprint set, but for some reason I kept these few cards around over the years, even through the purge that proceeded moving out-of-state years later.

A couple years ago when I got back into card collecting after a long hiatus, at first I was a bit rudderless with what/whom I should focus on. I wanted to set some basic parameters for my 2.0 collecting habits. I had an epiphany one night lying in bed that I would collect Padres in the Hall of Fame.. not just San Diego legends, but any player in the Hall who ever suited up for the Friars. Counting Jerry Coleman (not technically enshrined, but a Ford Frick Award recipient, essentially Cooperstown's nod to legendary broadcasters.. a grey area which is close enough for me in this instance), there are 12 such men, with Mike Piazza and Trevor Hoffman likely to bump the number up to 14 within the next few years (and in a just world, Garvey and McGriff will eventually make their way in, too). Since the franchise came about in 1969, that limits vintage cards that fit into this niche. The 60s/70s have McCovey and Gaylord, but prior to that, you've just got aforementioned Coleman, and Dick Williams.. both of whom never played for the Padres, but technically speaking did suit up for the team, as manager. Good enough for me! (If you really want to split hairs, Ted Williams played for the San Diego Padres in the 30s when they were a minor league team. I'd whole-heartedly collect him too were it not for budgetary restrictions.)

Yesterday I showcased my Jerry Coleman cards, and now here are my Dick Williams cards. 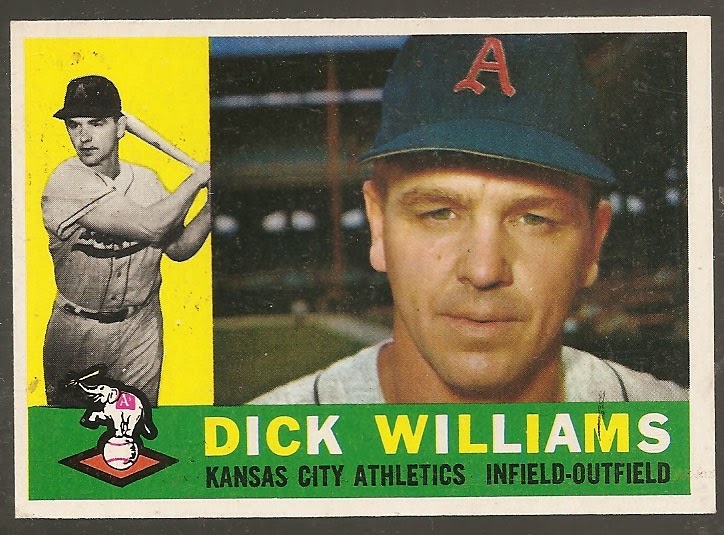 Here's a 1960 card from his playing days. He had a respectable career as an outfielder, also playing a fair amount at the corners.

Here are some various cards I've got from his prolific managerial days: 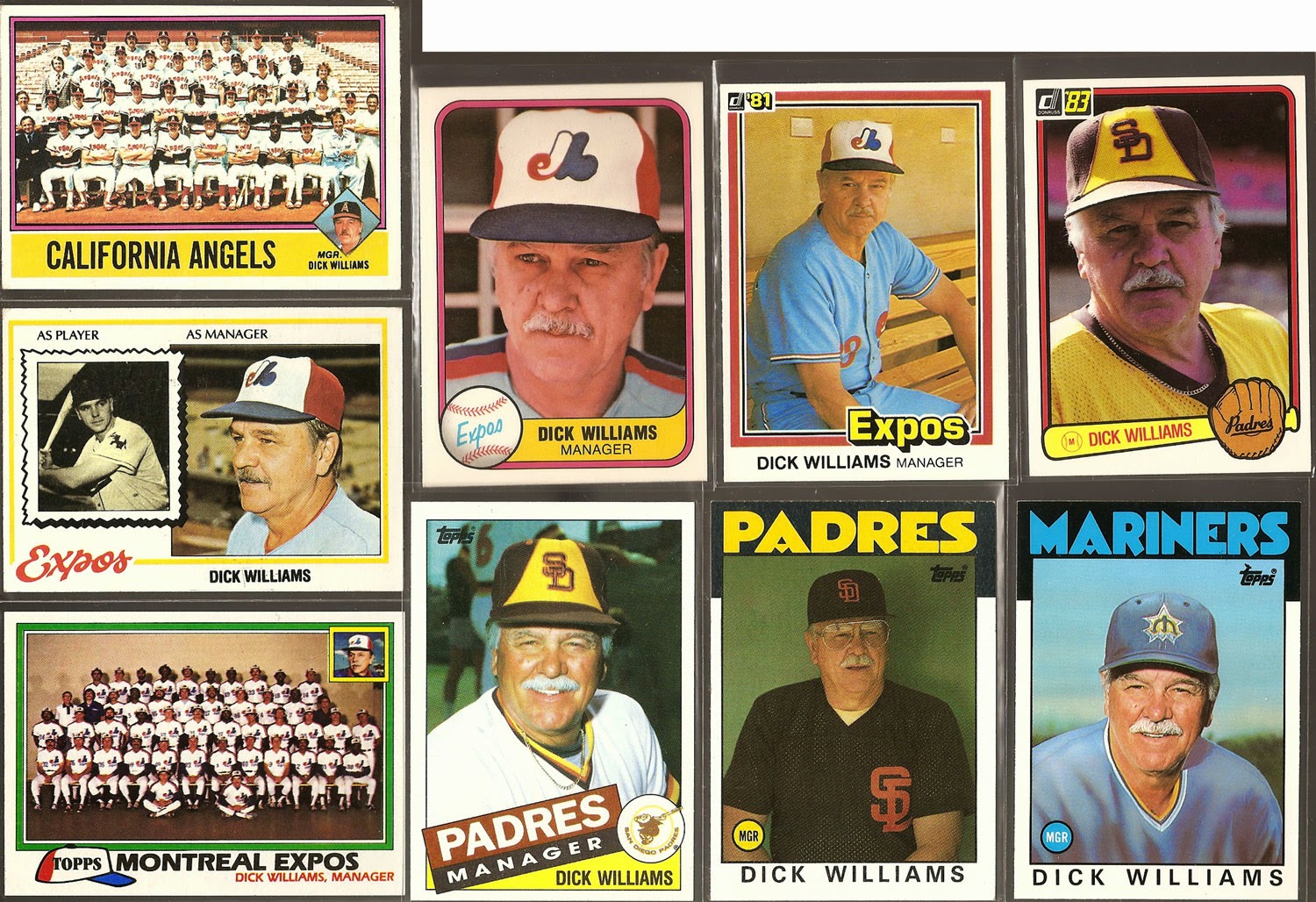 Dick made a name for himself (and earned his eventual HOF induction) by leading a 4 teams to the pennant. He was Yaz's skipper during his triple crown season of 1967. He guided Reggie to Oakland's first couple Championships (72 and 73). And-- securing a place in my heart-- he was pulling the strings for the only World Series game the Padres have ever won (Game 2, 1984). 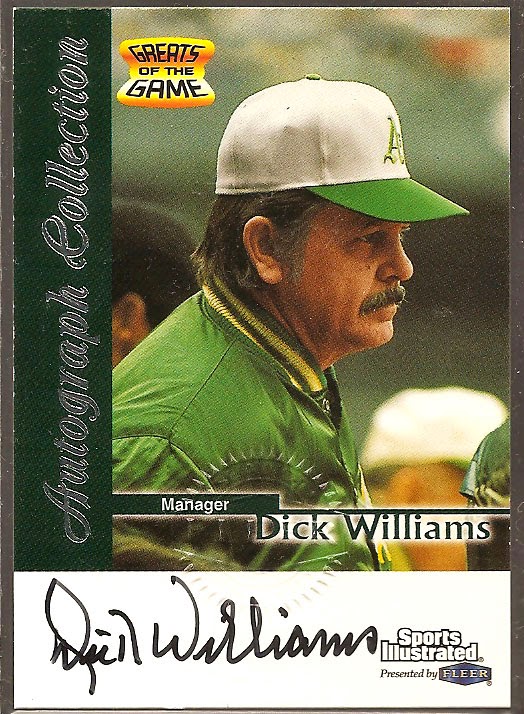 This autographed card is the centerpiece of my DW PC. He passed away in 2011 and doesn't have many certified auto issues out there.

But this is actually a "trade post" masquerading as a "PC post". See, Wes at Jaybarkerfan's Junk recently posted an "easy trade" bait with this Didi Gregorius auto: 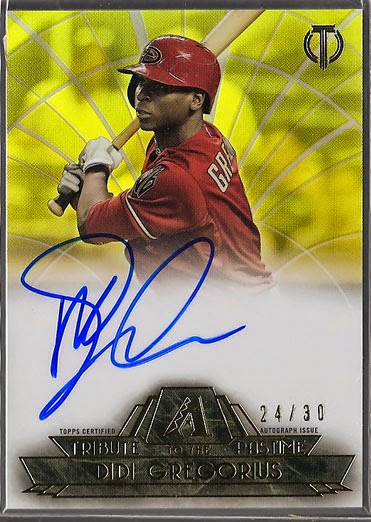 I went ahead and jumped on it. I'm by no means a huge Didi fan nor D-backs collector, but #1, it's a nice looking card, and #2 I'm always reading blog posts about how awesome JBF is to trade with, yet have never been lucky enough to trade with him myself, so figured I'd try to get my foot in the door.

Not only did Wes blindly send me the Didi auto, but he must've scanned my wantlist and seen ol' Dick Williams on there. 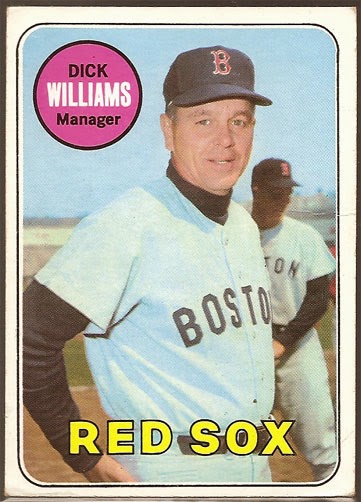 But the real knock-out was this guy: 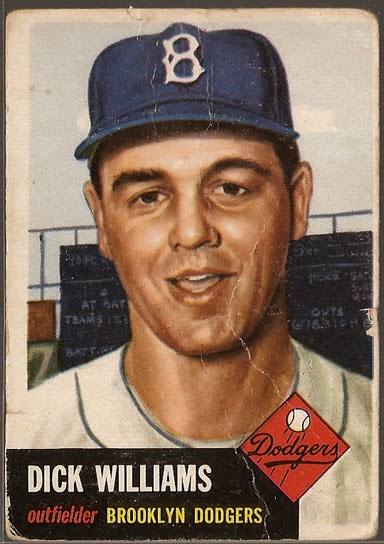 Yep, a real copy of that familiar Archives reprint I've had since before I knew who Dick Williams was. Now it's easily my oldest Dick Williams card, not to mention the oldest card I've ever received in a trade. Love it! Big thanks again, Wes!

So there's my Dick Williams collection as it stands today. Let me know if you got any of his cards that aren't pictured here available to trade, and thanks for reading.
Posted by defgav at 3:56 PM