There seems to be a modest intersection in the Venn diagram of sportscard collectors and Lego collectors. While I wouldn't call myself a full-on Lego collector, I do have a wastebasket tub full of Legos I've hung onto since my youth, plus a couple small Lego Star Wars sets my gal got me for Christmas a couple years back.

To cut to the chase here, I got the idea to make card display stands out of Legos. 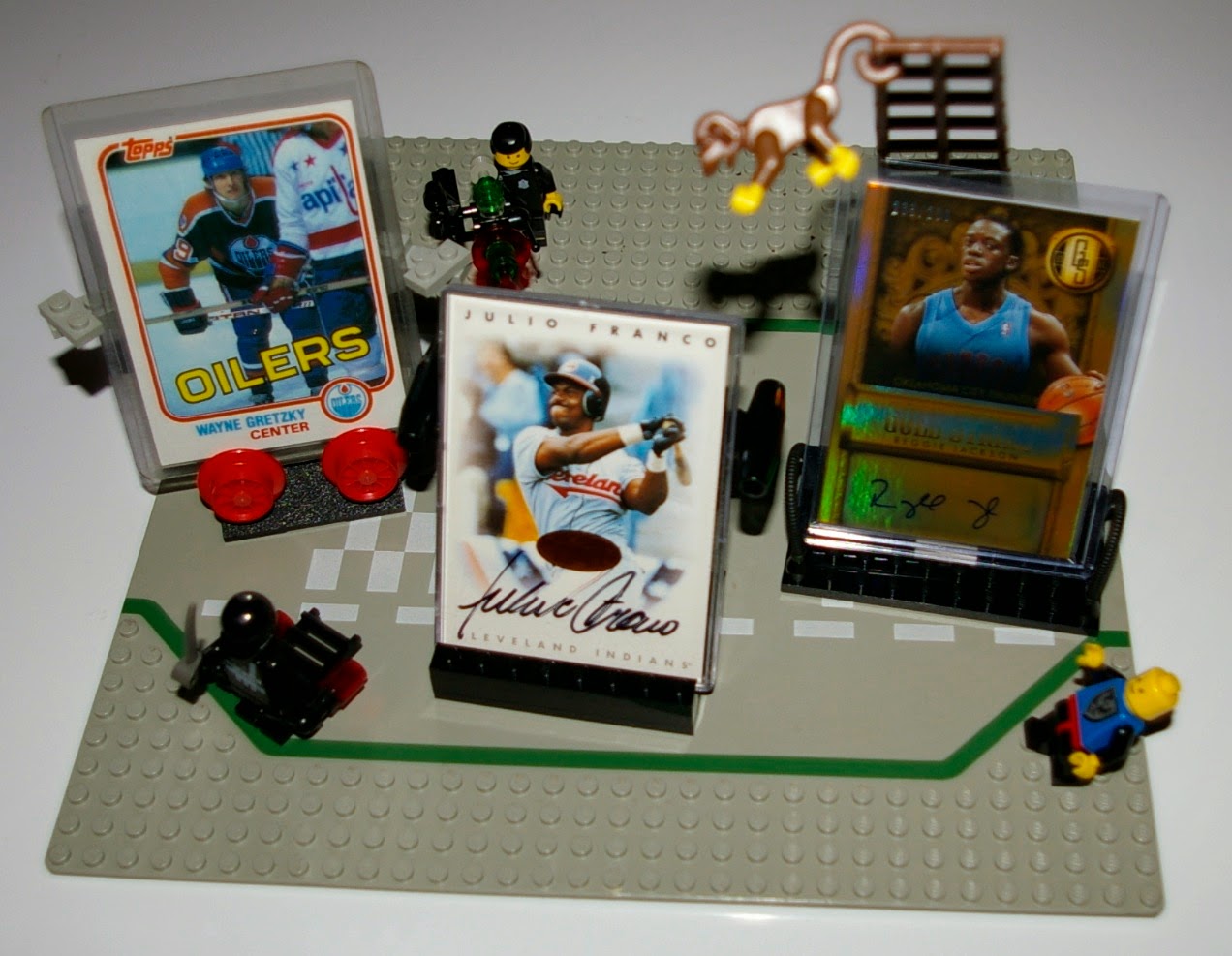 I love putting my cards up on display (as you can tell from my blog's header), but it's sometimes hard to arrange them and keep them from falling over. I don't really want to spend money on little display stands, and it's always neat when you can utilize Legos for real-world applications, so it was a no-brainer! Plus, as you regular readers have likely picked up on, I often like to take artsy photos of the cards I'm showing off on the blog, rather than a simple scan or tightly-cropt photo. It just adds another visually-interesting level to the images. And if there's one thing I strive for here at Baseball Card Breakdown, it's interesting images!

So anyways, let's check out some neat cards in stylish Lego display stands I made! (I would apologize at how incredibly dorky this is, but if it bothered you, you probably wouldn't be reading a baseball card blog in the first place.) 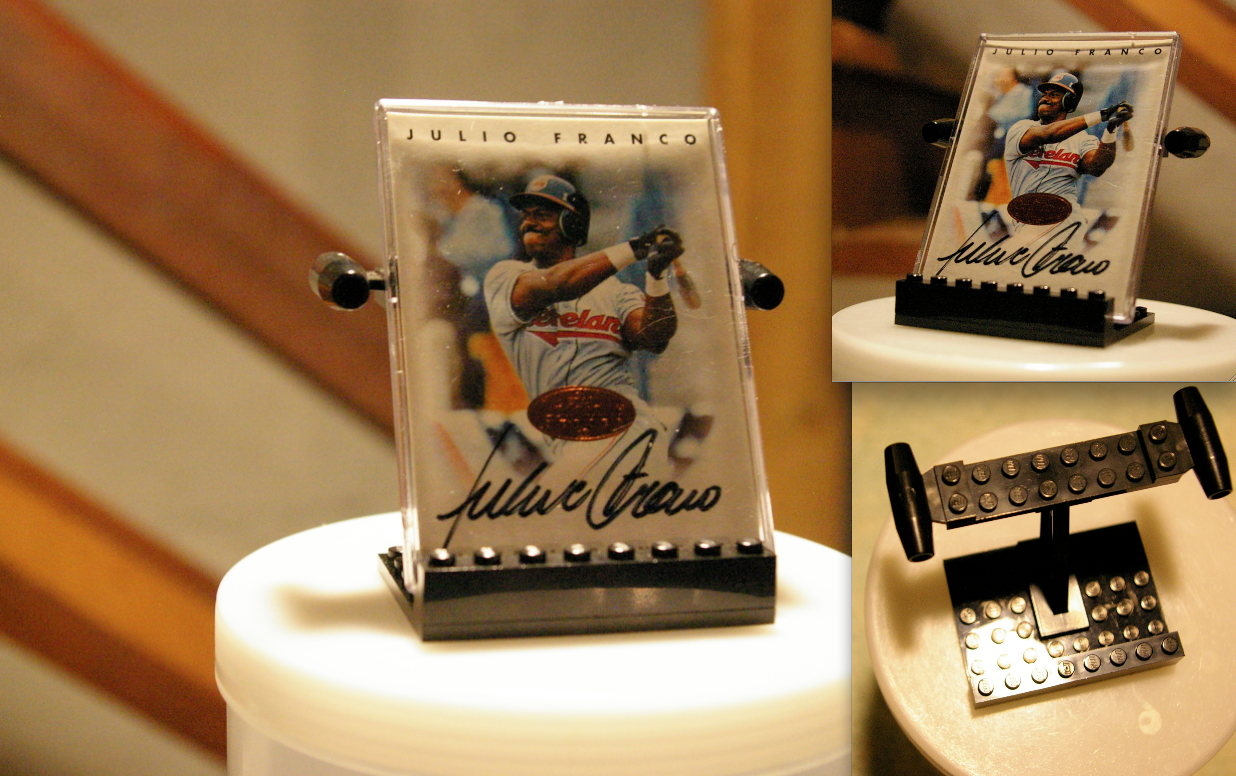 The Card: Love Julio Franco! Talked more about him in depth a few months back in a One True Rookie feature. I'm thankful for these mid 90s Leaf/Donruss signatures sets featuring non-superstar veterans who otherwise have few--if any-- certified auto cards out there. Was very happy to bring this home a few months ago for somewhere around $10, I believe.

The Legos: Simple, elegant, onyx. Unmistakably Lego, unmistakable class. The all-black design helps bring out the on-card autograph (from the days before blue sharpie became standard on certified autos). The space rockets on each side are too narrow for a top-loader, but snuggly keep a typical screw-down in place. --Or, as I have here, one of those slim hardcases finds some breathing room, yet still rests securely in the display's embrace. The Card: Back when I was in the market for a marquee Reginald Martinez Jackson auto (got it, btw!), I frequently saw this other guy named Reggie Jackson pop up in the search results. I heard some buzz on him being a promising young guy in the NBA, and his autos seemed to fetch a lot of green. When I saw this one with a low opening bid from Taiwan or thereabouts, I threw in a reasonable bid and ended up winning it. A few weeks later (I mentioned it was from a far-off land, remember), this beauty arrived into my clutches. I think the autograph is on-card, though it seems like a sticker. Hard to tell. Whatever, I like it. He's in the playoffs at the moment. I'm not a big basketball guy, but I'll be rooting for him.

The Legos: This luxurious stand features ribbed tubes on either side that have some elasticity to them, allowing a case of nearly any width or thickness to fit, keeping the card nestled safely within its bosom. I'll likely change that top piece; looking at these photos has made it clear to me that it's a bit too phallic for comfort while without a card perched on it.

THE ARMS OF GRETZKY 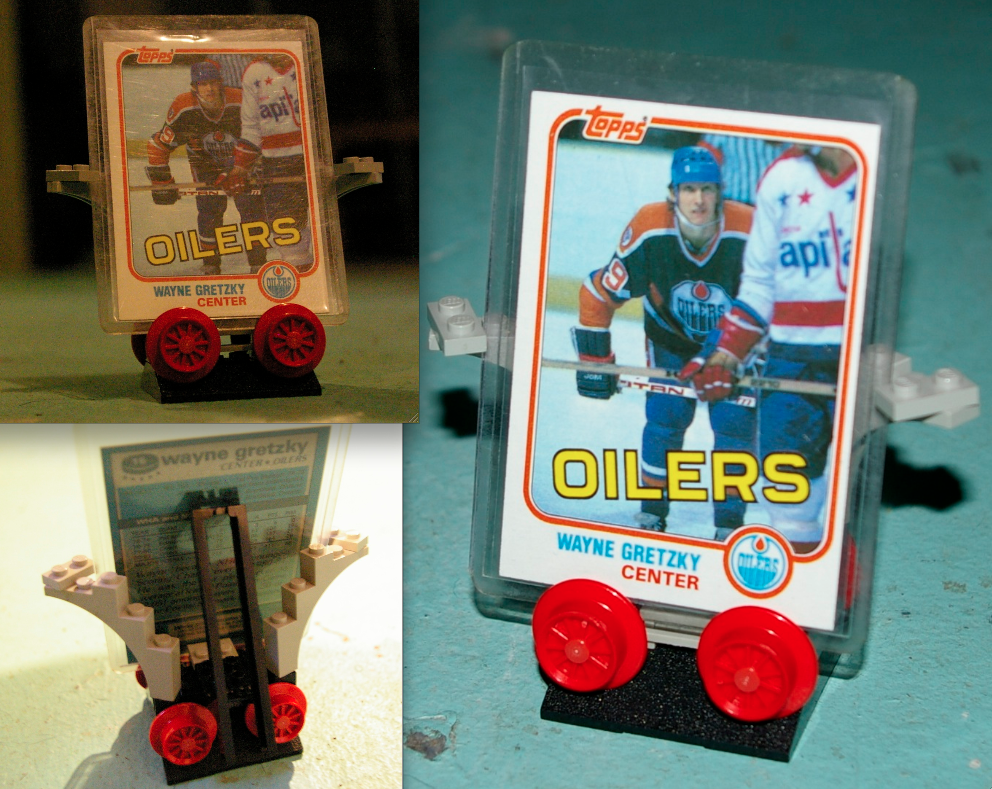 The Card: Finally, we have one of the only 2 or 3 good hockey cards in my collection, an early card of The Great One, Wayne Gretzky. Burned a bunch of Listia credits on this a year or two ago. The card says "CENTER" at the bottom, but ironically the card is quite off center! But I still love it. He's the best. I'd like to add more Gretzkys to my collection at some point.

The Legos: This is probably the least attractive of the 3 stands we're looking at today. I went with red wheels because I thought they might complement the red outline of the card, though understated black may have worked better. The center back bar is fully adjustable to allow the card to be fine-tuned to the desired angle. The arms are very functional, as they can be adjusted to secure just about any size needed with strength and vigor. However, they distract from the card a bit and the grey is a poor choice, as it clashes with everything. Perhaps if they were black or red they would bring the piece together. But aesthetics aside, this stand delivers performance with flexibility to accommodate your card-displaying needs.


In Conclusion: Making display stands for cards out of Legos is cool and a lot of fun; you should do it if you have some Legos lying around from your kids or your own childhood. Great for admiring a card on your mantle or at your office space, and probably a fun conversation piece. Post pics of any good ones you come up with! I'll most likely whip up a few more myself before long. Good luck and thanks for reading.
Posted by defgav at 3:55 PM