Chris Jones, but not that Chris Jones (Guys from Granite)

There have been 7 graduates from my high school to play in the major leagues (Granite Hills High School in El Cajon, California representing!) I've managed to obtain at least a couple cards from them all. I'm tipping my cap to each of them in this recurring Guys From Granite series. We're counting them down in ascending order by career games played, working our way to the most successful GHHS Eagle. This is part 3 of 7. 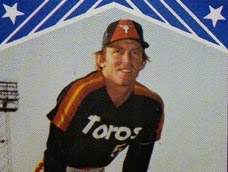 Chris Jones is a very popular name. There have been several guys named Chris Jones to make a name for themselves in the world, but the ballplayer who went to Granite Hills was a white guy who played in the 80s, not to be confused with the better-known Chris Jones who played in the 90s, or the minor leaguer currently pitching in the Orioles organization.

Christopher Dale Jones was born in 1957 in Los Angeles. He went from Granite Hills to Grossmont College (Community College) to San Diego State, a path I myself would follow a couple decades later (I wonder if he also went to my middle school and elementary school?) Grossmont College is often ranked among the best community colleges in the nation, if I recall, and much cheaper than a 4-year university (I can remember paying just $11 per credit in the 90s, though those days are long gone now), so it makes sense to knock out a few general courses there before moving on to the big time.

Anyways, Chris was drafted by the Houston Astros in the 25th round of the 1979 amateur draft. He had been drafted by the Orioles a couple years earlier, but didn't sign. Chris was a left-handed outfielder known for his defense. Speed was a big part of his game, swiping 40 stolen bases in 1980 (A ball) and 37 in 1981 (AA). Looks like he missed a lot of time in '82 and '83, likely to injuries, but bounced back for strong seasons in '84 and '85 with AAA Tucson.

Chris was called up to action in Houston in the middle of the 1985 season, picking up 5 hits in 25 at-bats with the Astros. He was mostly used as a late-inning defensive replacement or pinch runner, as evidenced by his appearing in 31 games, yet with only 28 plate appearances to show for it. Nolan Ryan was the winning pitcher in Chris' debut. That must've been cool to have Nolan Ryan as a teammate.

The Astros cut him loose after the season, however, and he wound up with the Giants. He only got into 3 games with San Francisco in 1986, with a lone at-bat. In his final MLB game-- a win over his former team-- he pinch-ran for Bob Melvin and got his only stolen base in the bigs. So I guess that's ending on a high note, at least. He was at AAA Phoenix for most of 1986 (.291) and all of 1987 (.257) before calling it a career.

Not sure where life lead him after hanging up his cleats. Chris was a bit before my time and I wasn't familiar with him until researching guys from Granite, so I don't have any personal memories or anecdotes about him. But it's pretty cool he made the majors, even if his career was shortlived.

Despite his major league service, this Chris Jones never got a baseball card from one of the big 3 companies of the time. He does have a few minor league cards and a couple major league postcards, however. With so many different athletes named "Chris Jones" it's a pain to search for his cards. But I believe this to be a somewhat complete checklist:

Here are scans of the cards I have. 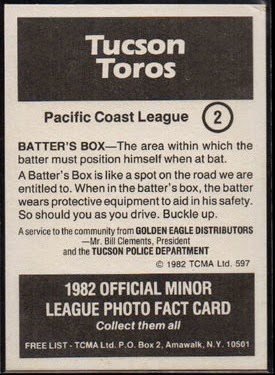 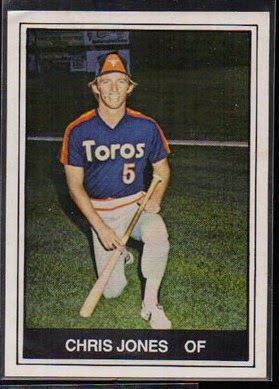 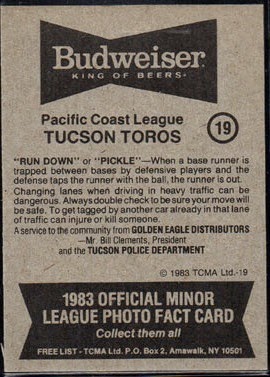 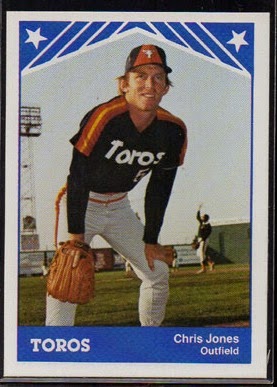 This one above is my favorite.. nice picture, good design, and ridiculous back, with the Budweiser ad, and the warning to not get caught in a pickle with your car. 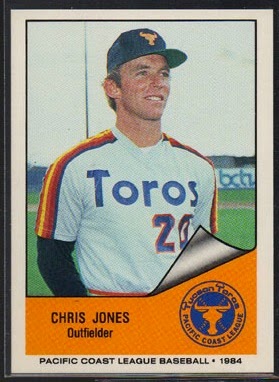 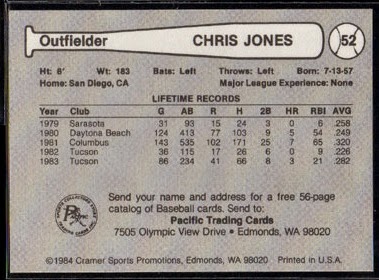 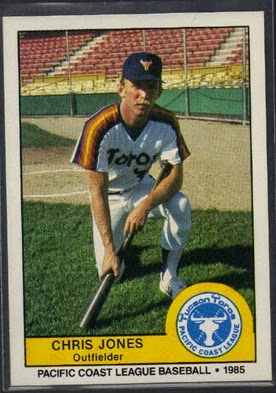 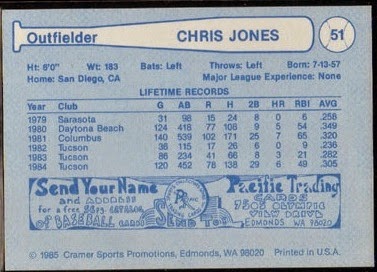 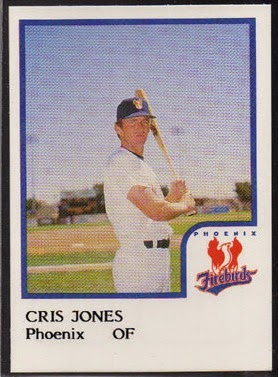 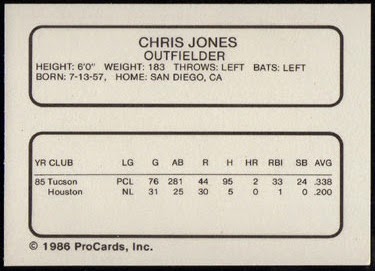 [HT] Poor "Cris"(?) couldn't get out of Arizona.. going from Tucson to Phoenix. At least that's somewhat close to his home in San Diego. I made the trip from San Diego to Tucson a few times in the 80s, too. It's a long drive, but you can make it in a day. I was just a kid, but my mom's old college roommate lived there with her two sons who were just a bit younger than me and we'd visit them for a few days once every 2 or 3 years. Had some great times with Nick and Ben.. Super Mario 3, G.I. Joes, getting into trouble as boys do. The only baseball card I ever stole was from one of their friends, but that's a shameful story for another day (it wasn't that bad). 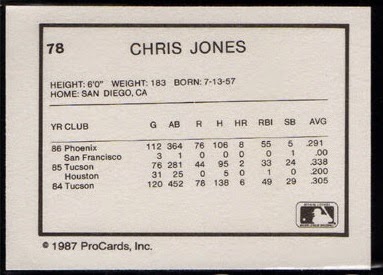 If you have any cards (or postcards) of this guy not pictured here, feel free to get in touch with me about a trade. Thanks!

Chris Jones is the only major leaguer from my high school I've yet to acquire an autograph from. Of course it's hard to search, since Chris Jones is a popular name and the search results are always for the other Chris Joneses. But I'll try to keep an eye out. If you can help me out with his auto, or perhaps have a line on a mailing address for former major leaguer Chris Dale Jones b. 1957 that I could try for a TTM, please let me know.

Hey, before we wrap up this post, let's go ahead and crudely photoshop up some Chris D. Jones cards that never were... 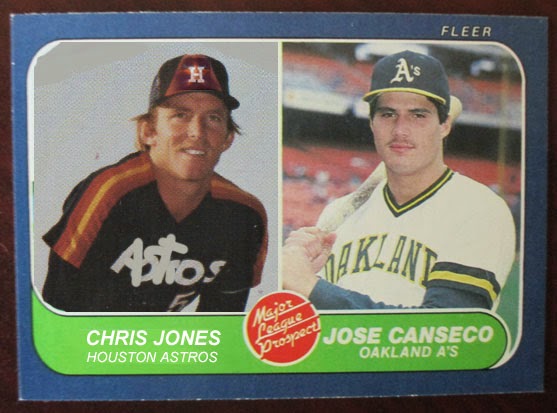 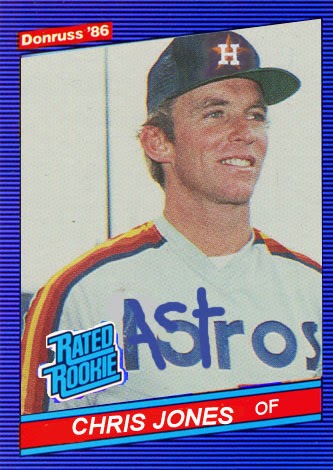 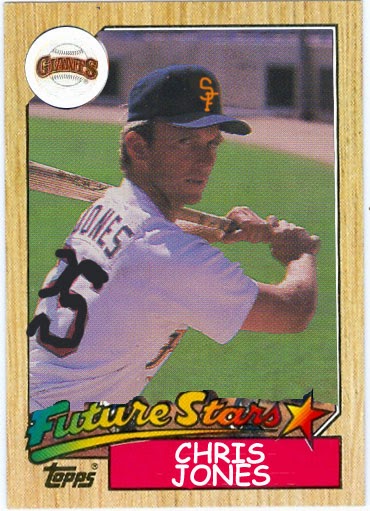 Ha, these are definitely not my best Photoshop work, but I was rushing to whip them up before work this morning. I couldn't find any pics of him in a major league uniform, so made due with butchering his minor league card photos.

Thanks for reading. Next time on "Guys from Granite" we'll take a look at the only Granite Hills Eagle to ever pitch in the bigs.