Some cards I bought recently

You may have noticed Wallet Card has really taken off! Very exciting! It's probably the closest to anything "viral" that I've been a part of, even if we're only talking about the small scale of online superfans of baseball cards. It's a bit surreal for me to see it mentioned so much over the blogosphere and on Twitter. Big thanks to everyone who's gotten onboard with it. The game has already produced its share of really cool photos (In addition to the blogosphere, keep an eye on the #walletcard hashtag on Twitter). Looking forward to checking out plenty more over the course of the year, and I'm very happy that my little post seems to have given a shot in the arm to several collectors out there.

A warm welcome to anyone who may have only recently found this blog thanks to the buzz surrounding Wallet Card. I hope you enjoy your stay at Baseball Card Breakdown!

But not every post can be a phenomenon. Sometimes it's just a few scans of cards I recently added to my collection.

What follows is a blaster's worth of cards (collecterspeak for "around $20") I got from a seller on eBay, taking advantage the "free shipping on orders $20+" special offer. These virtual card show pickups, as I like to think of them, hit a few points of interest in my collection. 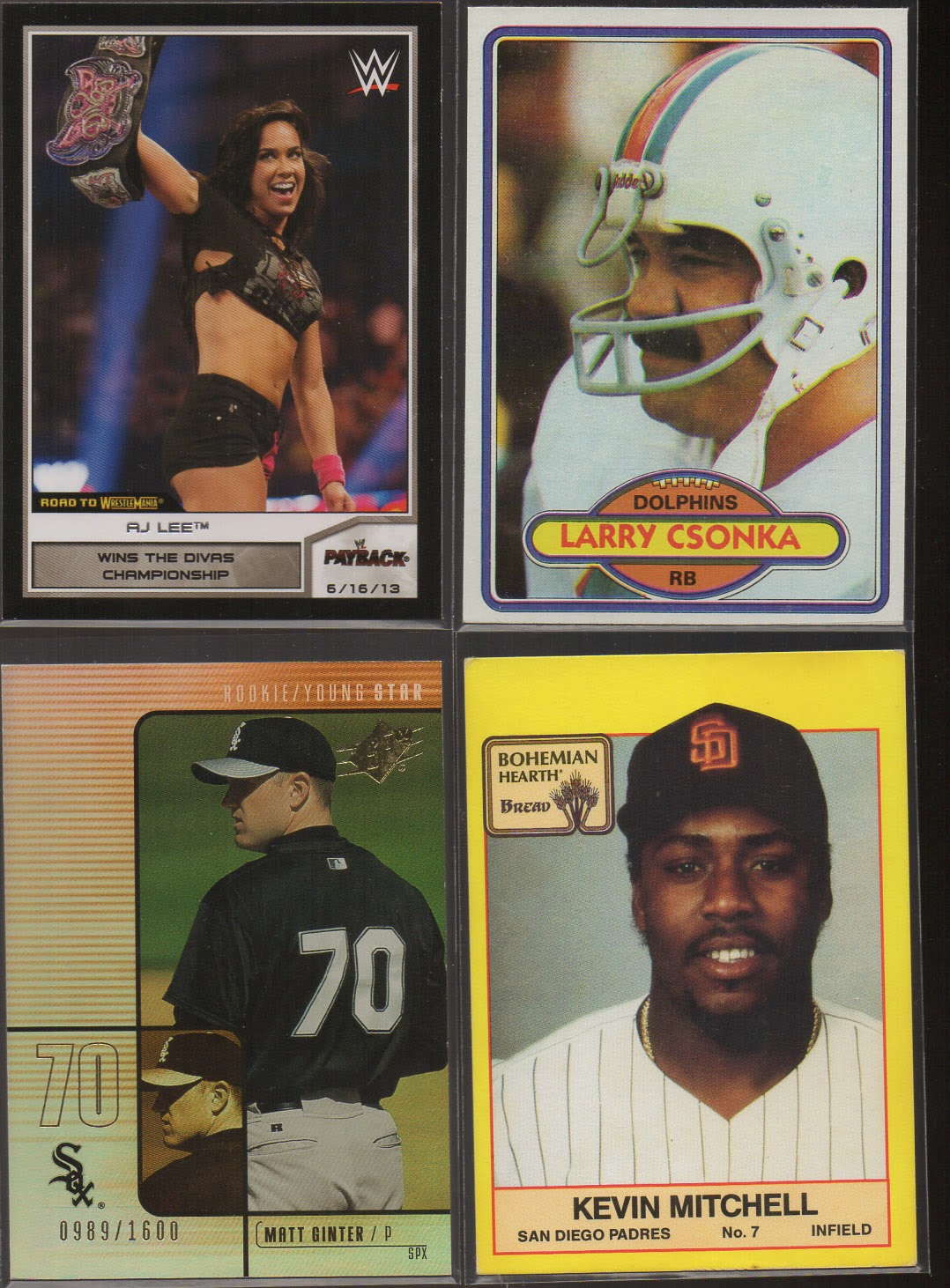 AJ Lee! I've gathered a few of her cards over the past several months though I don't follow wrestling. I just think she's a cutie. It's a nice "happy card" of her celebrating a victory of somesort.

My first Larry Csonka card! (Funny how in the scan he seems to be ogling AJ Lee.) Honestly, my interest in him is entirely due to being a MST3K reference in one of my favorite episodes.

And that yellow Kevin Mitchell bread card is one that's been on my wantlist for a while. It's one of the few cardboard remnants of his brief stint on the Padres. Plus I had a few of these Bohemian Hearth cards as a kid, even before I really started collecting baseball cards, so they hold a lot of sentimental value for me. 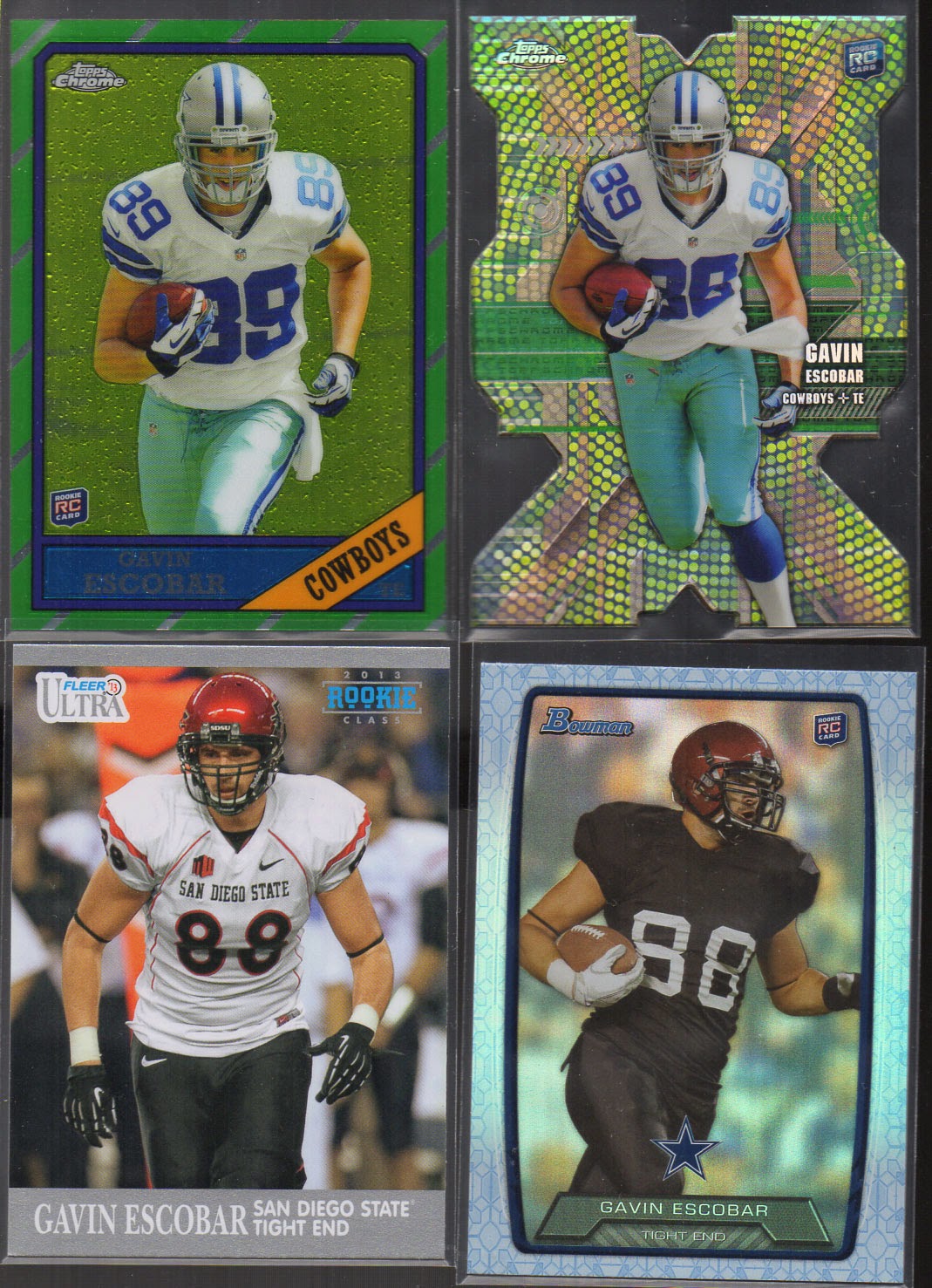 Despite how it seems, I don't really go nuts collecting Gavin Escobar, rather I just pick up his cards that catch my eye from time to time.

Similar to the Kevin Mitchell oddball, that first card strikes a sentimental chord with me because 1986 Topps Football were the first football cards I ever owned as a kid.

The next card is just a cool/weird looking diecut refractor.

The Fleer Ultra card is another fun blast from the past, since I ripped my share of 91 Fleer Ultra baseball as a kid-- but what puts this card over the top for me is the (non shopped out) SDSU uniform. It's a nice bonus that this guy I collect because of his name also went to my alma mater.

The 4th card there is a "2013 Bowman Rainbow Prism." Based on the name/scan, I had high hopes of it being a spectacular looking card in hand. Sadly, it was a disappointment. Just a boring bit of refractory shine over a border with a design that doesn't do anything cool and looks like drapes at your grandma's house. At least it's #'d /99 on the back.

More Gavins! That orange LaValley parallel is the card that triggered this little spree. It's #'d /60.

The Stewart Gavin is a neat 80s OPC card.

And I think the Gavin Osteen is my 3rd card of his. 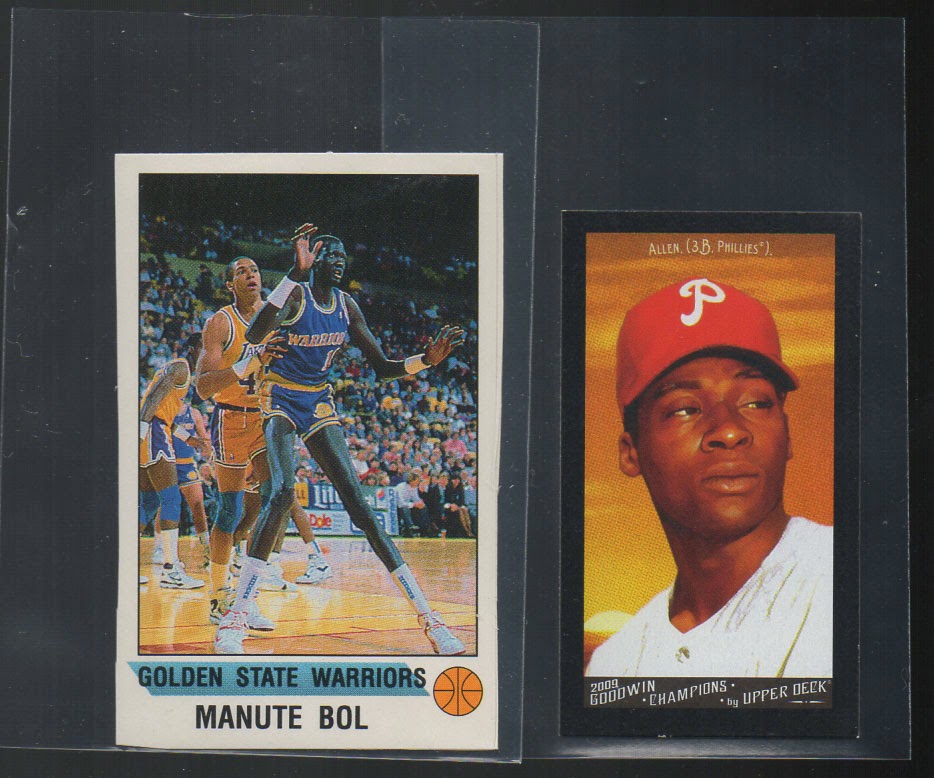 Finally, here are a couple minis. Well, the basketball card is actually a sticker. You gotta love Manute Bol, a giant stickfigure of a man with a heart of gold. Rest in peace.

That's a great Dick Allen mini. The regular-sized auto version of this card is a white whale of mine. But this black bordered mini is cool too.


So that's all for this time. Thanks for visiting.
Posted by defgav at 3:17 PM