First off, congrats to Marcus over at all the way to the backstop and his wife for welcoming their 3rd child into the world yesterday. Allow me to "dedicate" this scan to newborn Maxwell Coleman: 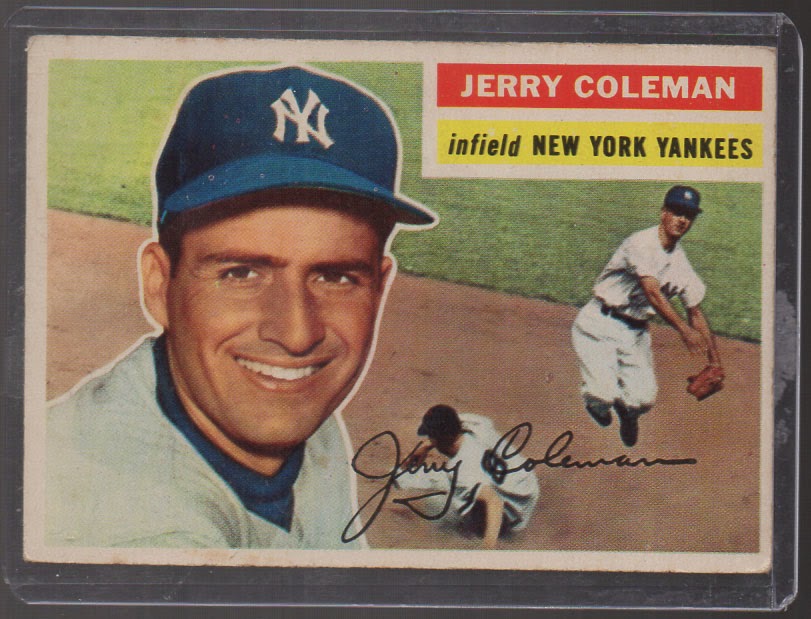 Yes, it's a beautiful vintage 1956 Topps card of his middle-namesake, Jerry Coleman. Last time I saw a vintage Coleman pop up on Listia, I was tight on credits and could only watch it sail by. Luckily these days my virtual account is relatively bountiful, so I was able to pony up 7050 credits on this excellent addition to my PC of the Colonel. Actually, there don't seem to be a whole lot of mainstream playing-days cards left of his that I need, so I might be able to finish off his flagship Topps and Bowman runs sometime in the foreseeable future. Nice.

Sticking with vintage, but changing sports, here's a sweet 81-82 Topps Julius Erving. I'm not a big non-baseball collector, but love occasionally picking up all-time greats such as Dr. J here. There's a bit a wax residue on the front that the seller neglected to mention, but it's fine. Set me back 1499 credits.

I've again struck gold(schmidt)! Sorry for the pun. My Paul Goldschmidt collection keeps expanding every week. That A&G is an SP. One of these came with a Marty Akins college football card I don't need, but was a cool bonus from the seller regardless.

Here are a couple more fixtures to my Listia recaps, Roberto Alomar and David Ortiz. The two of these Latin American greats are racing to see who gets off my wantlist first. (Once I accumulate 100 different cards of a player, I stop actively collecting him.. that's my plan for 2015 anyways.) And the end is in sight for both of them. The Robbie card is from 1995 Stadium Club, while Big Papi shares this 2012 Heritage card with Will Middlebrooks.. who I think might be a Padre now, if I'm not mistaken. So if he has a good season, I'll probably start collecting him too.

Rod Beck is another bargain-bin favorite of mine. (Is that his hair, or is he standing in front of a dead bush?) Back when Wallet Card was getting started, at least a couple participants noted that these Studio faux credit cards would be perfect choices for the game. But perhaps a little too "on the nose," and I don't think anybody ultimately ended up picking one of these for their wallet card. This card, from 1995 Studio, has pointy corners, rather than the rounded corners most of these types of inserts seem to have.
This card came in an auction along with a Matt Williams insert I don't need. (The trouble with collecting a select few Giants is I end up with plenty of Giants that I don't want.)

So those are the Listia wins that showed up since last time. Now onto the webtraffic.

A young Gerbil tops this week's recap (1/14) 38 views. Man, I hate to bitch about clicks, but just 38 views for a post boasting a vintage rookie card of a big name? Oh well. Let's hope today's recap post can comeback with a decent turnout, otherwise I should probably think about nixing the concept.

A couple lots from Sportlots [HT throughout] (1/15) 63 views. This was a fun post with "hidden text" sprinkled within it. Got off to a slow start, but eventually blew past the 50-view target.

Tom Fordham went to my high school (Guys from Granite) (1/17) 35 views. The least-viewed post in quite a long time [*sob, sniff*]. But yeah, I get that Tom Fordham isn't exactly a sexy name. Thank goodness for Matthew Scott, the only person to comment on the last two Guys from Granite posts, for keeping my streak without a comment-less post alive. But now we're into the top 3, which are interesting "known" guys, so I'm hopeful the ratings for this series will rebound as we head toward the finale next month.

more silly animated gifs of baseball cards! (1/19) 90 views. There we go! I had to bring my A-game to help stir up some support for "blog of the year" award voting currently underway. Animated gifs of cards are always fun to whip up and usually get a good reception. The first 3 gifs were made the prior evening. Then that night I had the idea for the airplane one and whipped it up before work the next morning. I'm glad I did, because it cracks me up and seems to be most peoples' favorite too. Anyways, if you haven't voted yet, don't forget to exercise your democratic right and do so both here (A Cardboard Problem) and here (2 x 3 Heroes).

Alright, that's it for today. Thanks for stopping by!
Posted by defgav at 3:59 PM