Concern over counterfeit and custom cards on the market

I've mentioned before about how I find the rising ease of producing unauthorized cards unsettling. It's gotta be the #1 threat to the hobby going forward. Back in the day, an entrepreneuring asshole with access to a specialized printing press could spend a few weeks creating a Jordan rookie or '52 Mantle that was passable to the casual eye. But now, with advancement in printers and computer programs like Photoshop, anybody willing to shell out a couple hundred buck for a nice home printer can do the same in a few minutes.

Even added touches such as foil, refractor shine, and holograms are possible for the amateur card-creator if he is willing to spend the time and money to work it out. It's all just trial and error with various types of paper and tints and whatnot until an acceptable card is created.

All this "home brewing" cards is fine when it's for your own personal use. But when such cards start ending up on the secondary market, that's bad news for everyone.

This is where the difference is heightened between custom "cards that never were" and counterfeit copies of real cards. The day will come when two identical 1/1 Mike Trout superfractors are on eBay at the same time with it being anybody's guess as to which one is authentic.

But the crime is not exonerated when a seller comes right out and tells you it's not a real card.

The blog WHEN TOPPS HAD (BASE)BALLS! is run by Giovanni Balistreri. Don't be fooled by the juvenile name; his is an incredible blog focusing on 1970s baseball. Gio uses his background in graphic design and vast knowledge of the game to create a plethora of custom "cards that should have been" and "fixes" of cards from the decade that Topps botched with bad airbrushing, boring photos, or whatnot. Many of his customs are so awesome that you'll ache at the fact they weren't released by Topps some 40 years ago.

Recently, Gio was browsing eBay and noticed a hard copy of one of his own creations for sale. Turns out this seller has made hundreds, perhaps thousands of dollars over the past year or so by selling prints of other people's custom cards. The cards typically sell for around $5, but can sometimes go for over $40 if two or more misguided collectors have a bidding war over a card. 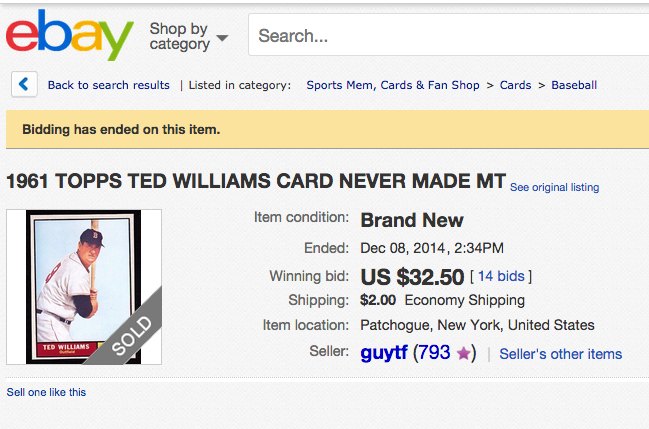 The seller comes right out and admits it's a fake card in the description: "THIS IS NOT A REAL TOPPS CARD. IT IS WHAT A TED WILLIAMS CARD WOULD HAVE LOOKED LIKE IN THE 1961 TOPPS SET. CARD HAS A BLANK BACK."

Geez! It would almost be forgivable if the guy was selling copies of his own creations, but the fact that the seller is using other people's cards without their knowledge is pretty dicked.

But I don't want to just pick on this guy. I'm sure he's not the only one out there selling cards like this.

For instance, I stumbled upon this other guy a couple weeks ago while searching for cards of Reggie Jackson in an Orioles uniform: 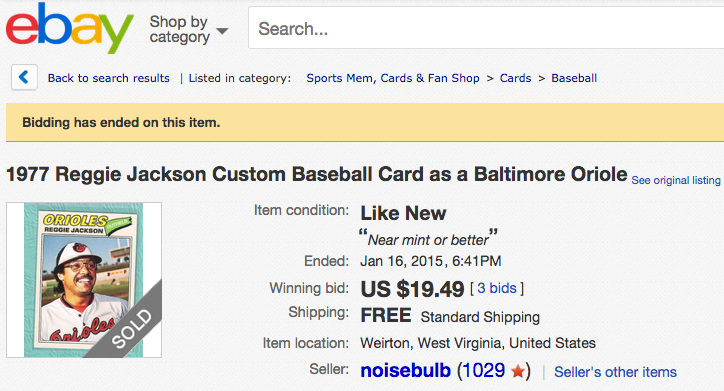 He seems to exclusively sell custom cards for around $20-25 each, with 33 such auctions running at the moment. I'm not sure if those cards are his own, or he snagged the pictures online and just printed them out on nice paper. Again, the seller clearly states in the description that this isn't a true vintage card, but does that make it ok?

As far as other notable physical customs out there... (Not saying there's anything wrong with what these guys are doing. For the record, if I had a nice printer or a buddy at a printshop, you bet your ass I'd be producing cards myself, too!)

Munnatawket Custom Cards are pretty popular customs, aping the design of 2008 Allen & Ginter minis to help market a small baseball bat manufacturer operated by the guy who makes the cards.

Punk Rock Paint has released a couple sets of oldtimers.

The guy at the blog 6,000,000 Cards and Counting also profits off his customs. Now, this guy here scares the shit out of me, to be honest. Just look at this fake cut signature he made recently: 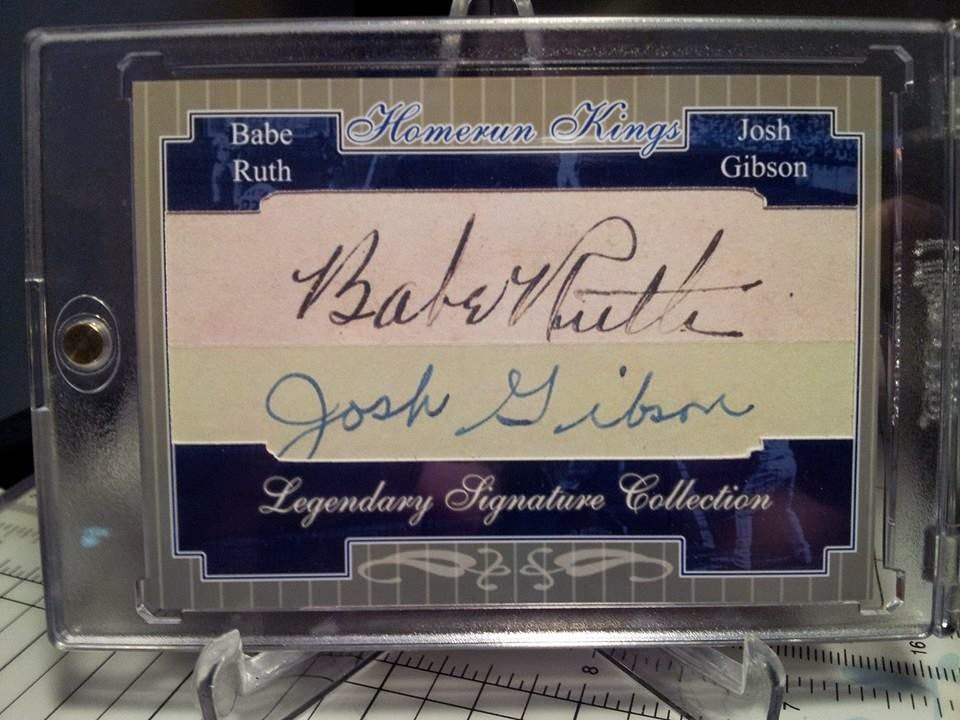 Wow. A dual cut auto of Babe Ruth and Josh Gibson that looks and feels real and can be bought for just $13. And that's just one of many authentic-looking customs he's produced over the past couple years. He's made Jose Canseco (his favorite player) faux-auto refractors in the style of 2013 Topps that could pass for the real thing were it not for a disclaimer in small print on the back stating it was signed by his printer. His work really is amazing. But if he or someone like him "turned to the darkside" and started being dishonest about his fake cards and/or started making straight perfect-copy counterfeits of real cards (which I'm sure would be no challenge for him), the entire hobby could get a swift stompdown in the ass. I can see it now: The high-end "investment" spectrum of the hobby will crumble, and it'll eventually trickle down to the dimeboxers who collect for the love of the cards. Card companies will fold and collecting will go from "cards you collect" to "cards you make or have made for you". The collectors still remaining will be the few who simply don't care if the piece of cardboard in their hand was made by a legit card company or some guy in his home office.

I hope my apocalyptic prophecy for the hobby is proven wrong, but I'm convinced this is a "when" not "if" scenario. People have been talking about the impending death of the hobby for a long time. It's weathered the overproduction / '94 strike fallout, and the rise of eBay that effectively removed much of the "scarcity" that drove the hobby, forcing companies to resort to dozens of pointless low-numbered parallels to give pack-rippers hope to pull something they couldn't just grab online for a buck. Pack searching is an unfortunate part of the hobby that surely hurts retail sales, but ultimately isn't a huge threat to the general health of card collecting. Digital cards like Topps Bunt have gotten some traction, but don't seem like they'll be phasing out physical cards anytime in the near future.

But when the day comes that anyone can print up any card they want imaginary or not, the hobby landscape will shift dramatically, and it's not that far away. Just thinking about it makes me want to start selling off my collection, at least the big-money cards. I'll make sure to get high-quality scans of them first so I can print my own copies a little ways down the road when that becomes the norm.

So what can be done? Well, if an eBay auction for an inauthentic card catches your ire, you can click the "Report item" link near the upper far-right of the description and use the drop down menu to alert eBay to the counterfeit/unauthorized card. If enough people report an item, eBay might pull the auction and/or issue a warning to the seller, possibly suspending his account for repeated infractions eventually.

But to really make an impact in curbing counterfeit/custom card sales, card companies will need to step up (Topps in particular, since they pretty much have the monopoly on mainstream vintage cards).

Topps has gone after other card manufacturers before, such as when Upper Deck tried to sneak out sets after losing their MLB license. But going after "the little guy" isn't something I've heard of them doing. If they really wanted, they could probably go after card blogs like mine simply for posting scans of their cards. When you think about it, it's not much different than posting an mp3 or movie online. But card blogs don't make money (a few may get a little kickback in exchange for advertising, but I'm sure it's not much) nor do they hurt card sales (more like free advertising for new cards on the market and stirring interest in the hobby), and there'd be a lot of backlash from the collecting community.

However, with the rise of sellers making thousands of dollars on fake, counterfeit, unlicensed cards, the big card manufacturers need to start addressing this as a serious threat. I'm not sure if they've currently got any taskforces dealing with the problem, but they definitely should. I kid about how in the future, mega hit cards will have a tracking microchip in them to help identify an authentic card, but I'm only half-joking about that. The day is coming when you'll buy a certified autograph on the secondary market, then login to Toppanini's website to enter a code on the back of the card to check the GPS coordinates of that particular card in their system to make sure it matches up with your house. How else will you be able to tell somebody with a nice printer didn't just crank it out themselves?


So there's my conspiracy-theorist ramblings troubling little exposé on counterfeits and hard-copy customs endangering the hobby. I hope it spurs some thought and discussion. Please share any thoughts in the comments.
Posted by defgav at 3:58 PM