I've been picking up cards from 2001 Archives Reserve here and there over the past several months, and just knocked out my last remaining needs with a recent COMC order. Let's take a look at the entire set, 1 thru 100, comprised of refractor reprints of notable Topps cards from yesteryear (mostly rookie cards).

(Ernie Banks is not featured in the set, otherwise I'd have him front and center as a tribute. RIP, Mr. Cub.) 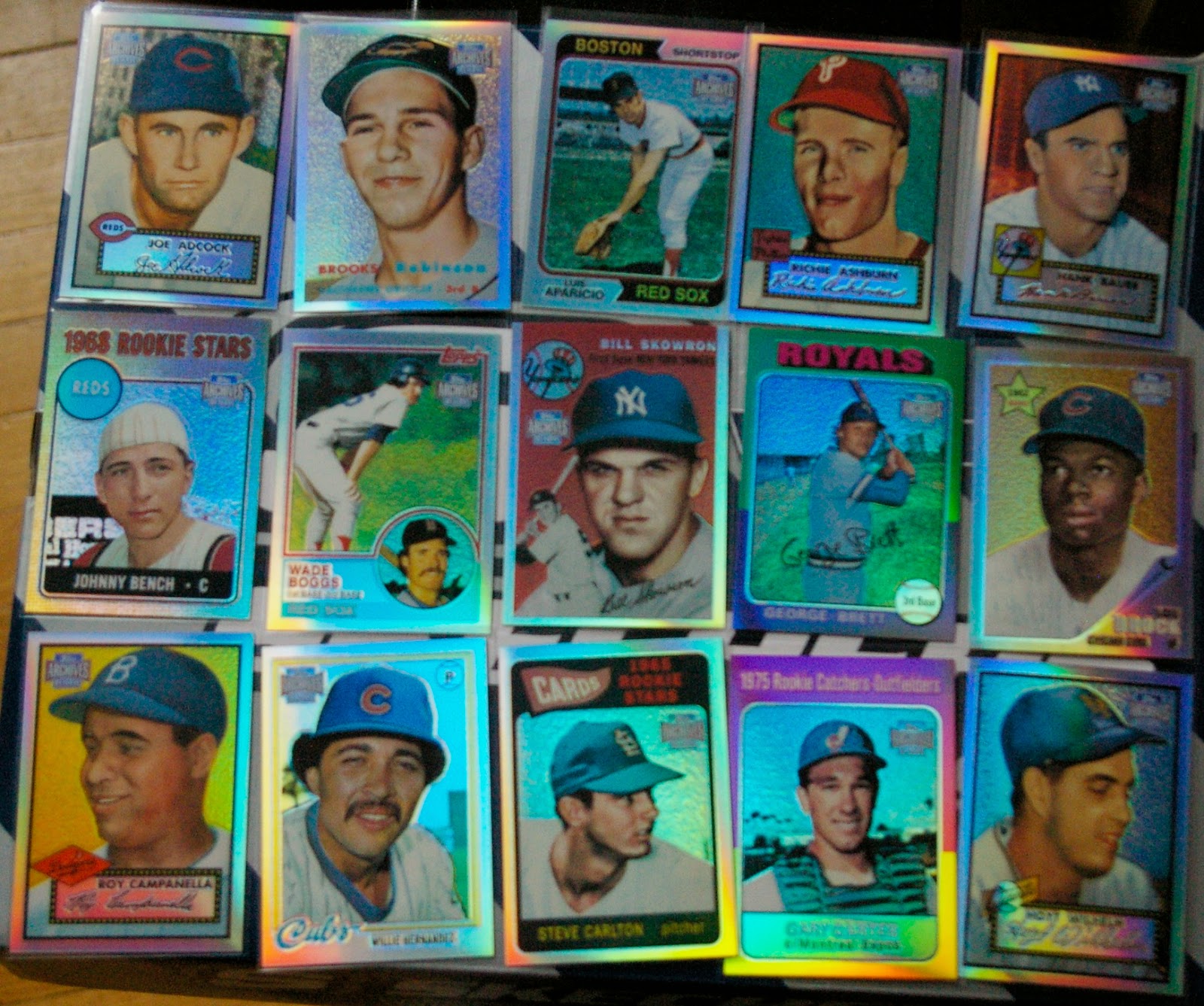 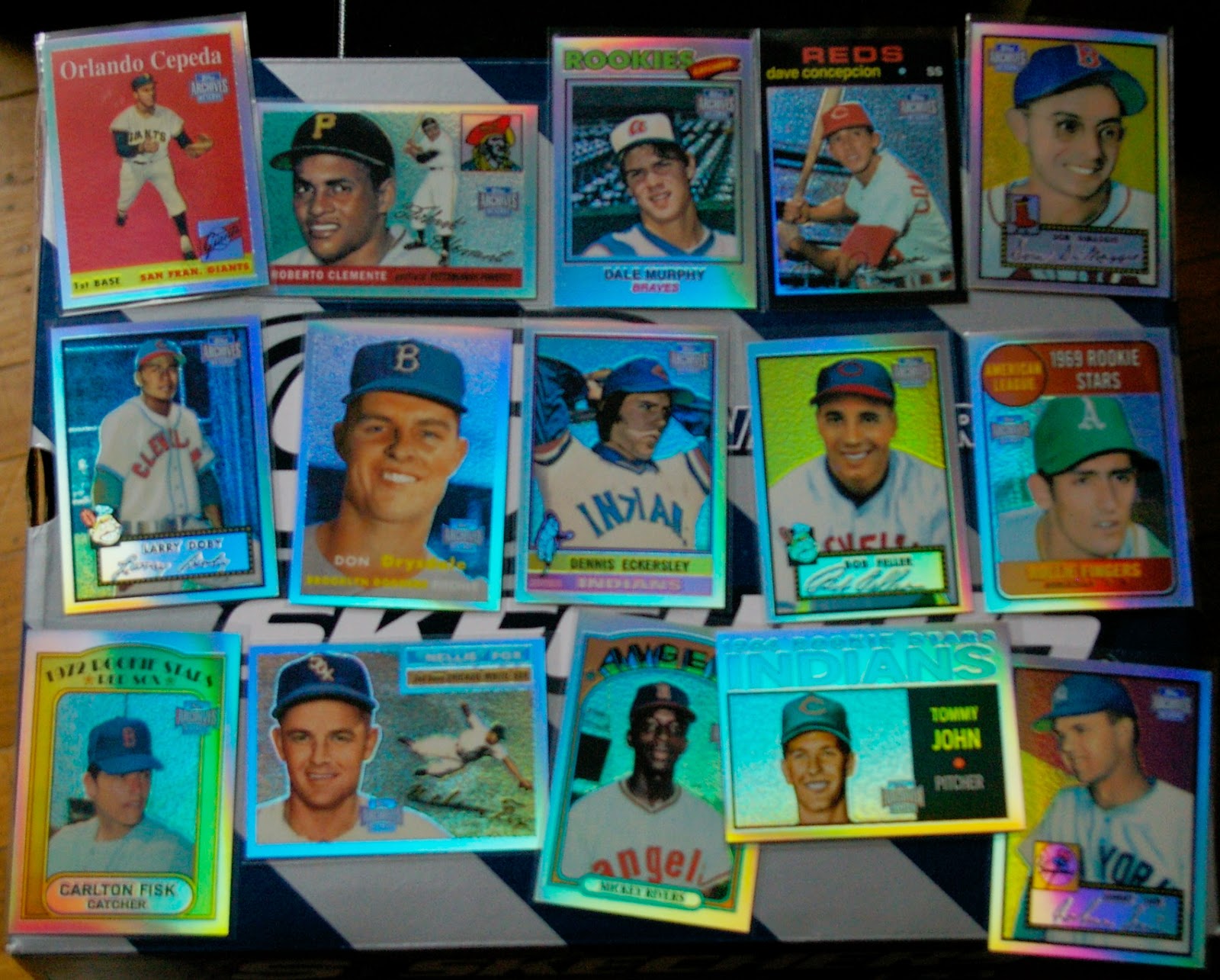 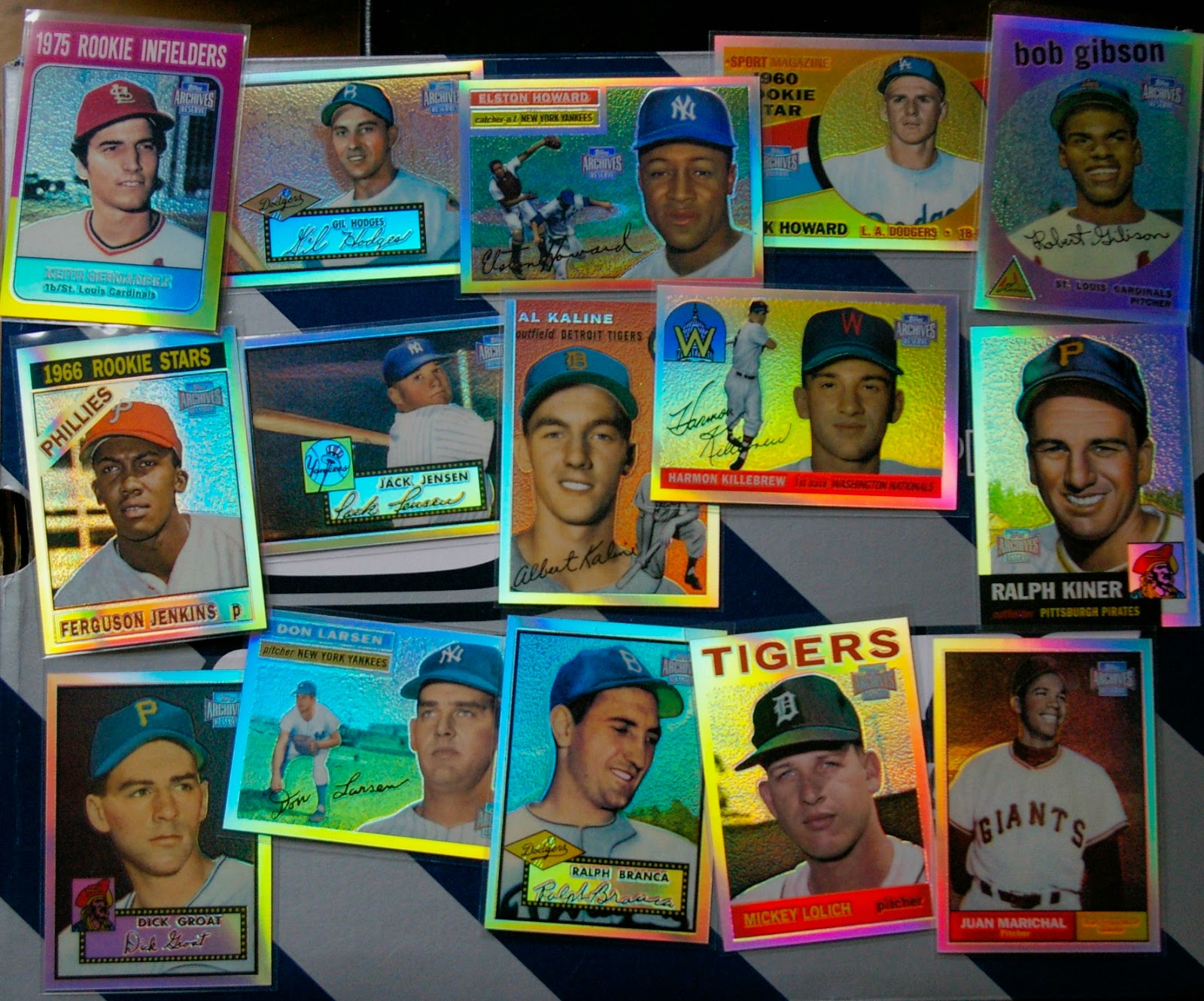 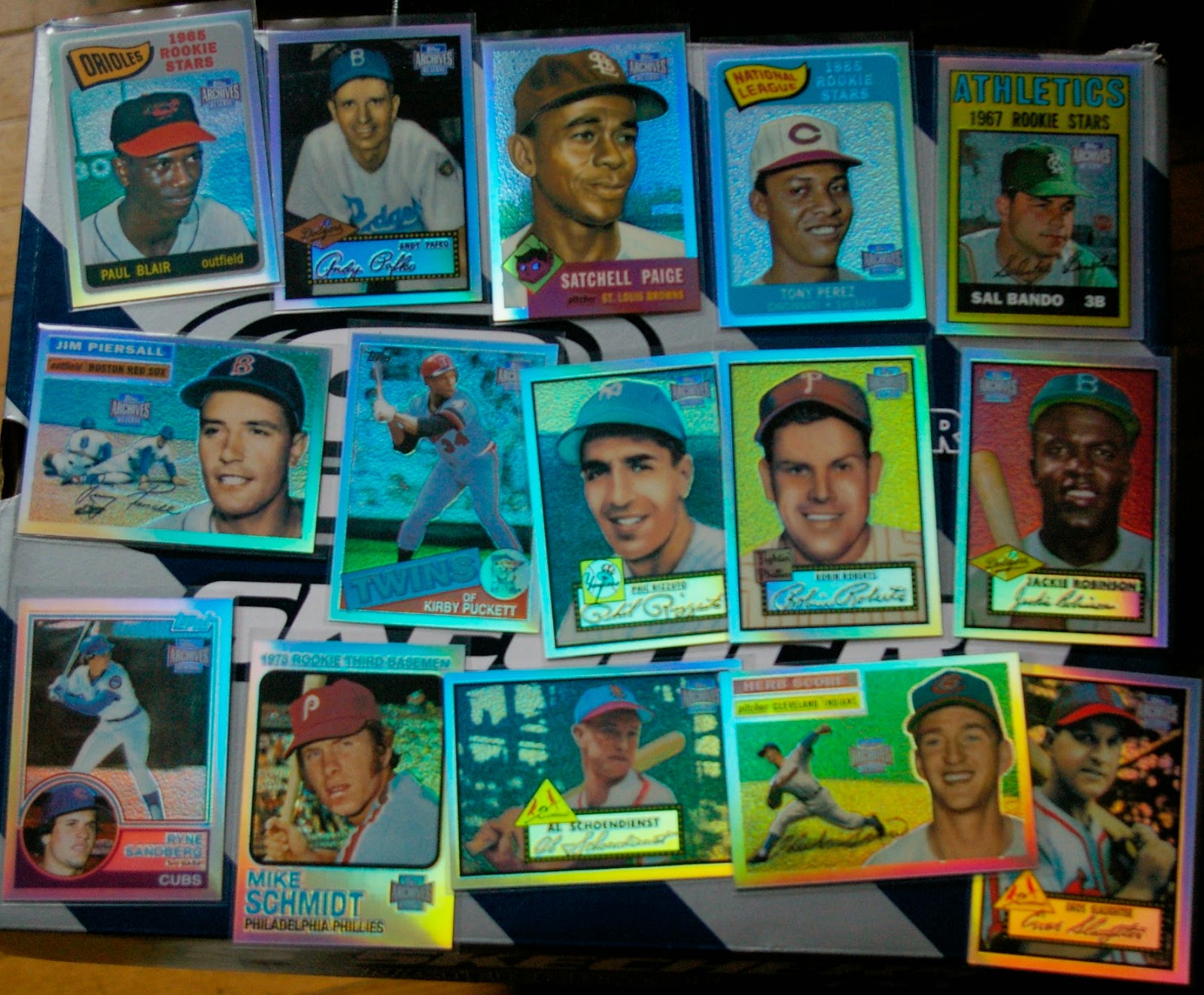 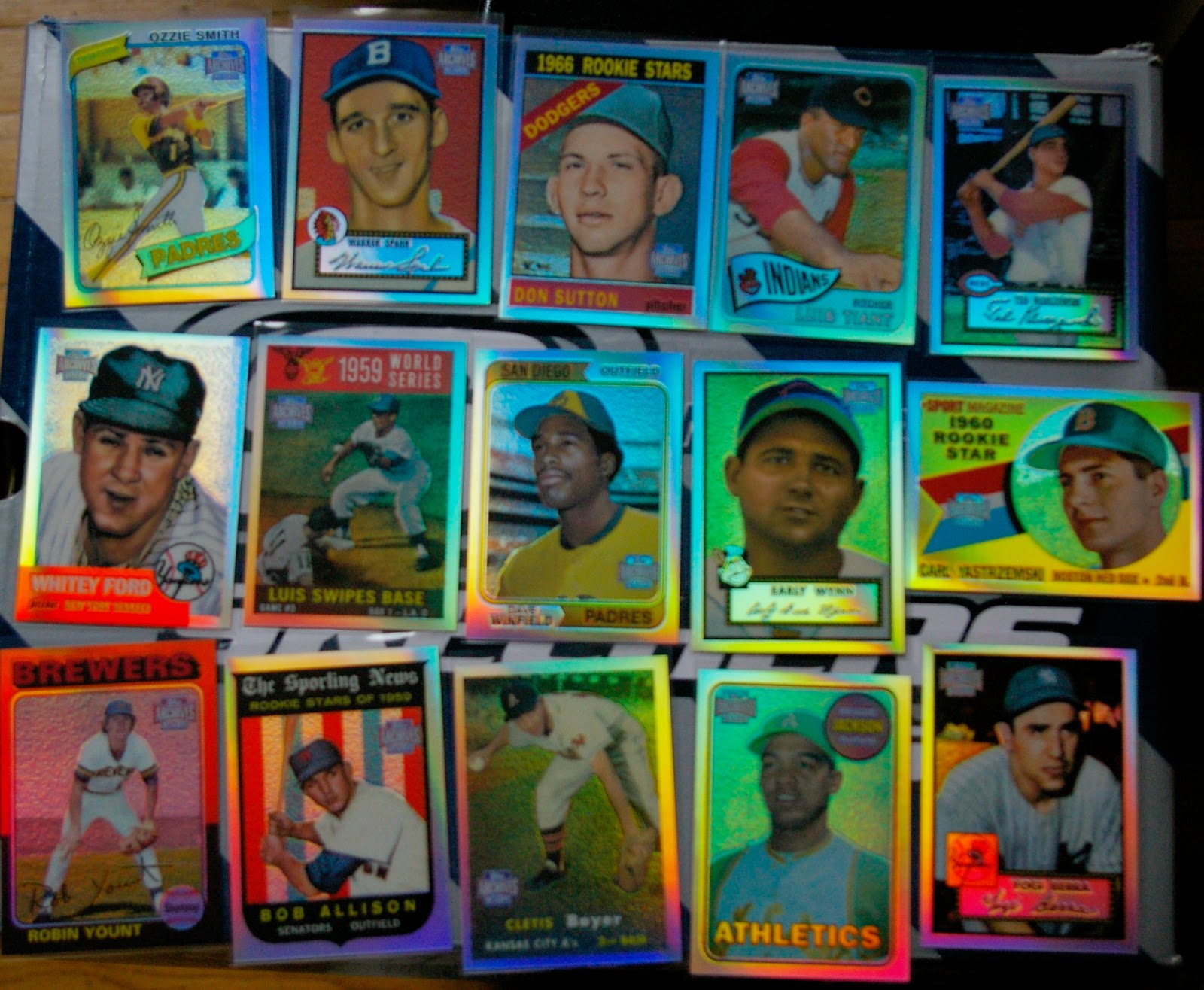 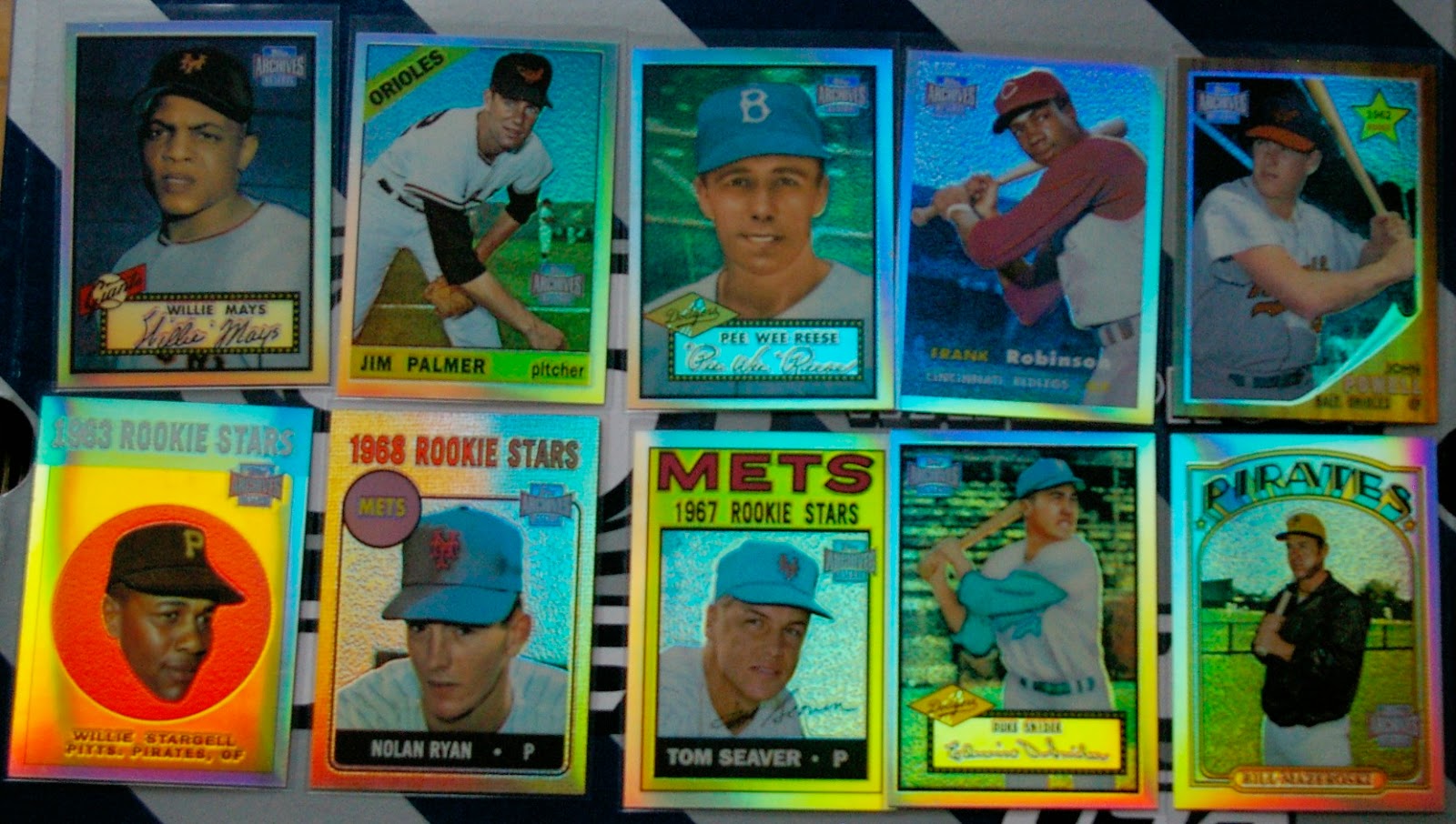 As I've mentioned before, what really appeals to me about this little set-- in addition to the purdy rainbowed shininess-- are the backs.. bright and clear as possible. So nice!, especially when juxtaposed with the main ("non-Reserve") 2001 Archives set, with its dark, hard-to-read backs. Can you guess which is which below?

Happy to put this set to bed. But of course this is only the base set. There are also autos and relics, but I don't have interest in chasing those (or should I say, interest in spending a lot for them). Maybe someday, though.

There's also a 20-card insert set called 2001 Topps Future Archives Reserve featuring refractor (or just Chrome but not refractor?) rookie card reprints of active-at-the-time players like Jeter and Bonds. Seem a little pricey to me. Again, maybe I'll chase those down someday, but not a priority. Despite the Archives Reserve logo, these aren't technically part of the same product. They were issued 5 per factory set of 2001 Topps flagship "Limited Edition"/Tiffany hobby factory sets. The regular factory set included 5 Topps Future Archives cards, but not the "Reserve" versions. It's all kind of confusing. There were apparently 3905 Limited sets produced. So one of you mathematicians out there will have to tell me how many of each Future Archives Reserve card was produced if 5 cards from the 20-card insert set were included with each factory set.

Hang on.. since drafting the above paragraph, I found an auction for 3 of these Future Archives Reserve cards together for 99¢ shipped, and couldn't pass that deal up. They arrived yesterday:

I can confirm these are not refractors, rather basically just Chrome-like parallels. That's a little disappointing. But still, if anybody has any of the other 17 cards from this insert set available, I'd love to work out a trade. It'd just be a nice little supplemental set to make my complete 2001 Archives Reserve set extra complete. Same for any relics and autos.. just in case down the line I ever want to go after a "master set" of the thing.

Anyways, I've got a few needs remaining from the follow-up sister set, 2002 Archives Reserve. That'll probably be the next set I finish, sometime in the not-too-distant future. I'm not a big set collector, generally speaking, but manageable 100-card sets like Reserve and Retired are more up my alley.
Posted by defgav at 10:53 AM

Email ThisBlogThis!Share to TwitterShare to FacebookShare to Pinterest
Labels: 2001 Archvies, Archives, Joy of a Completed Set