Mondays suck. But at least there seems to be a greater-than-average chance of cards in my mailbox thanks to the Sunday build-up. Let's check out the 4 mailings I received yesterday (and take a look at the shipping methods).

First package was from Julie at A Cracked Bat. Not to come off as a neanderthal, but I believe this was my first-ever instance of trading cards with a girl. Hopefully it's the first of many. Boys are gross.

Julie was able to get away with sending a bubble mailer with postage of $1.10, which impressed me greatly. Anytime I send a package like that, it's at least $2.32. As such, I try to stick to PWEs when I can. When I sent Julie cards a few days earlier, I used 2 separate PWEs (about 8 cards per) with a Forever stamp on each. I probably could have saved a few cents if I loaded up a long envelope, but alas.

But back to the the varying postage cost to send a bubble mailer.. I guess it depends if it falls into the definition of envelope or package. Maybe that's a grey area. Technically a bubble mailer is more of an envelope than it is a box, right? But I'm under the impression the USPS counts these as packages. Hmm. But yeah, if you can get away with calling it an envelope, I guess you can save a little money.

Julie used to work for USPS, if I recall her mentioning, so she must be a postage pro! Any good mailing tips to pass on?

But back to cards... 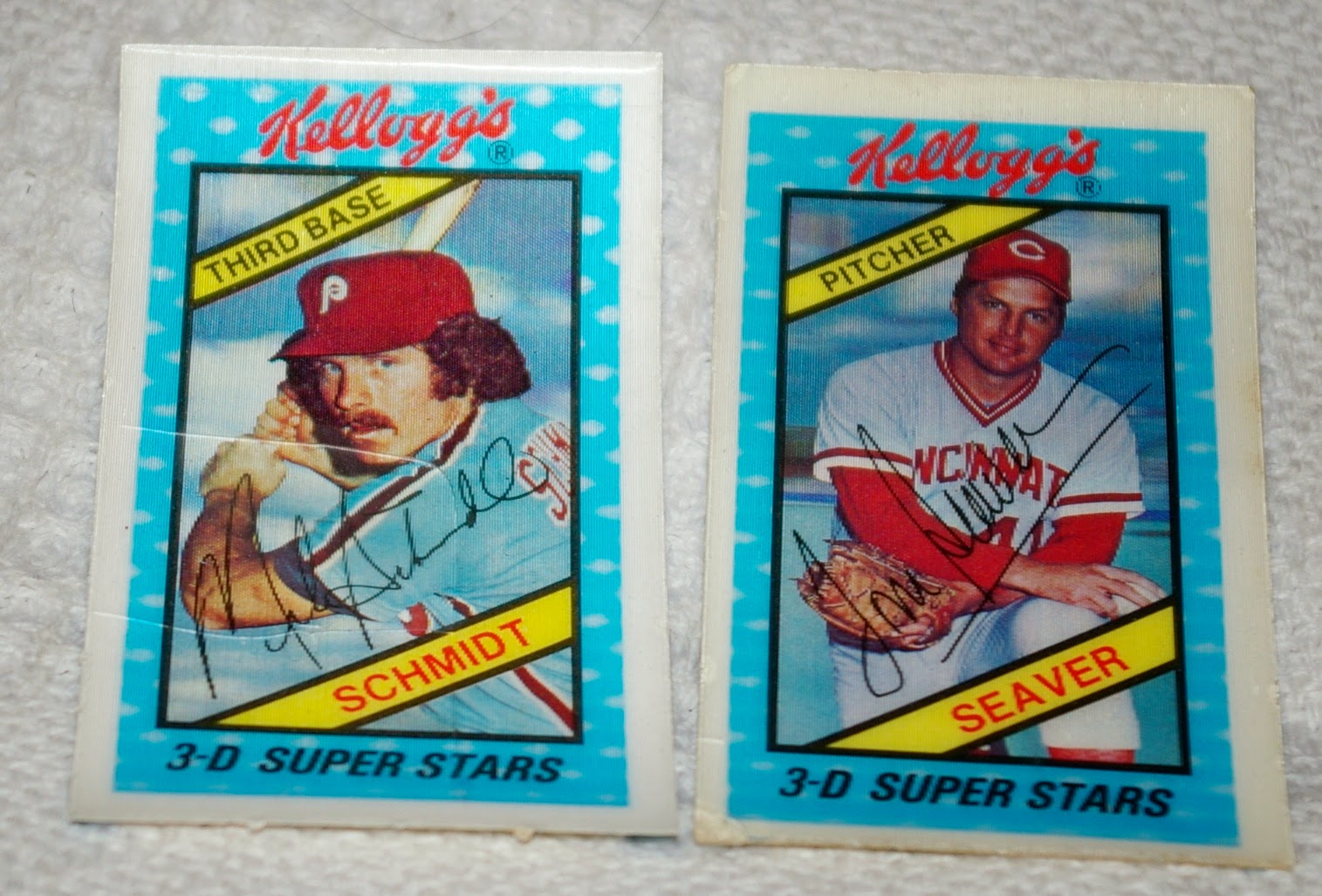 Julie offered up a bunch of off-condition Kellogg's cards on Valentine's Day and I called dibs on these two greats. The rest of the cards were surprises, as Julie checked my wantlist for guys I collect. 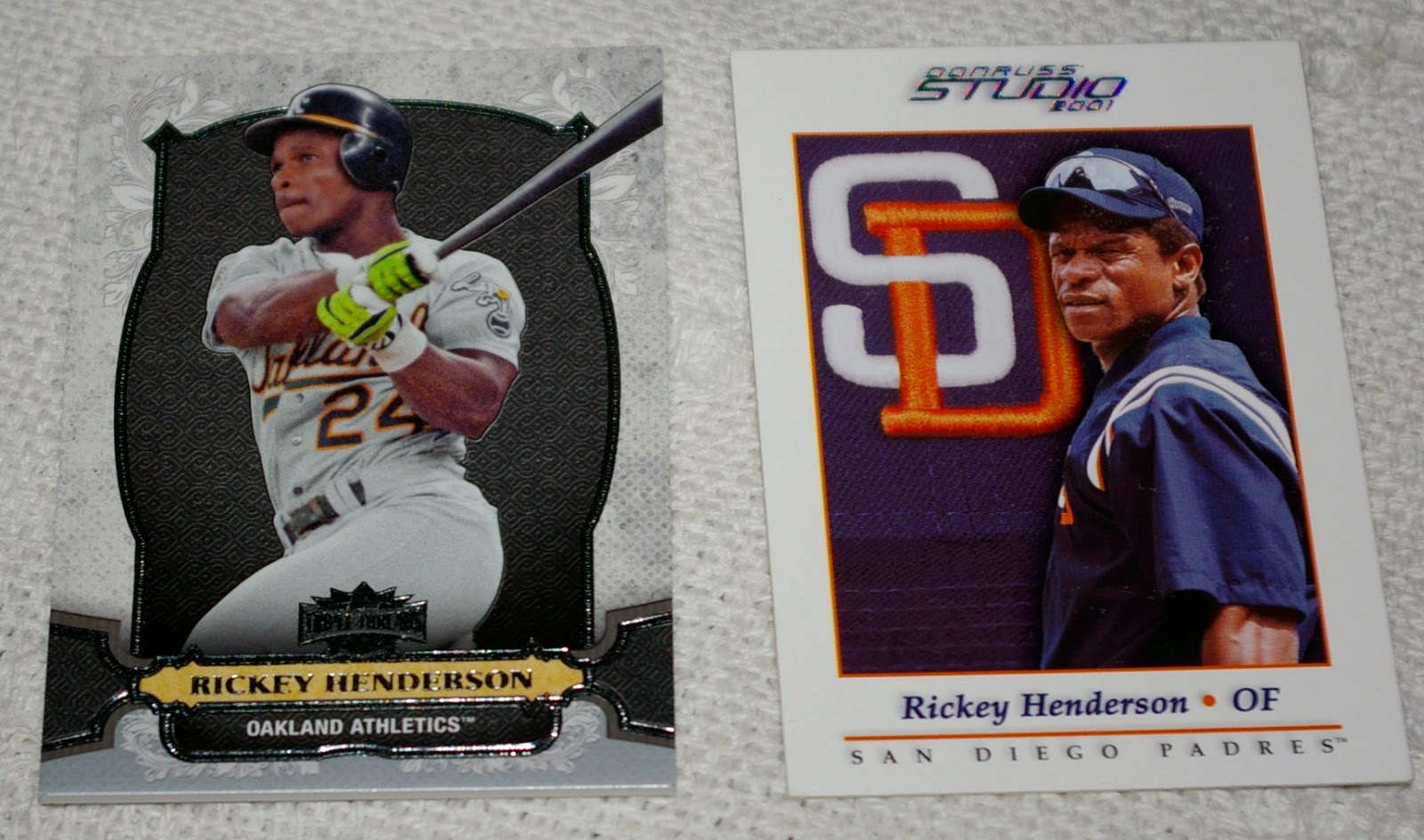 A couple Rickeys, including a thick Triple Threads base card and an always-appreciated Padres-era Rickey. 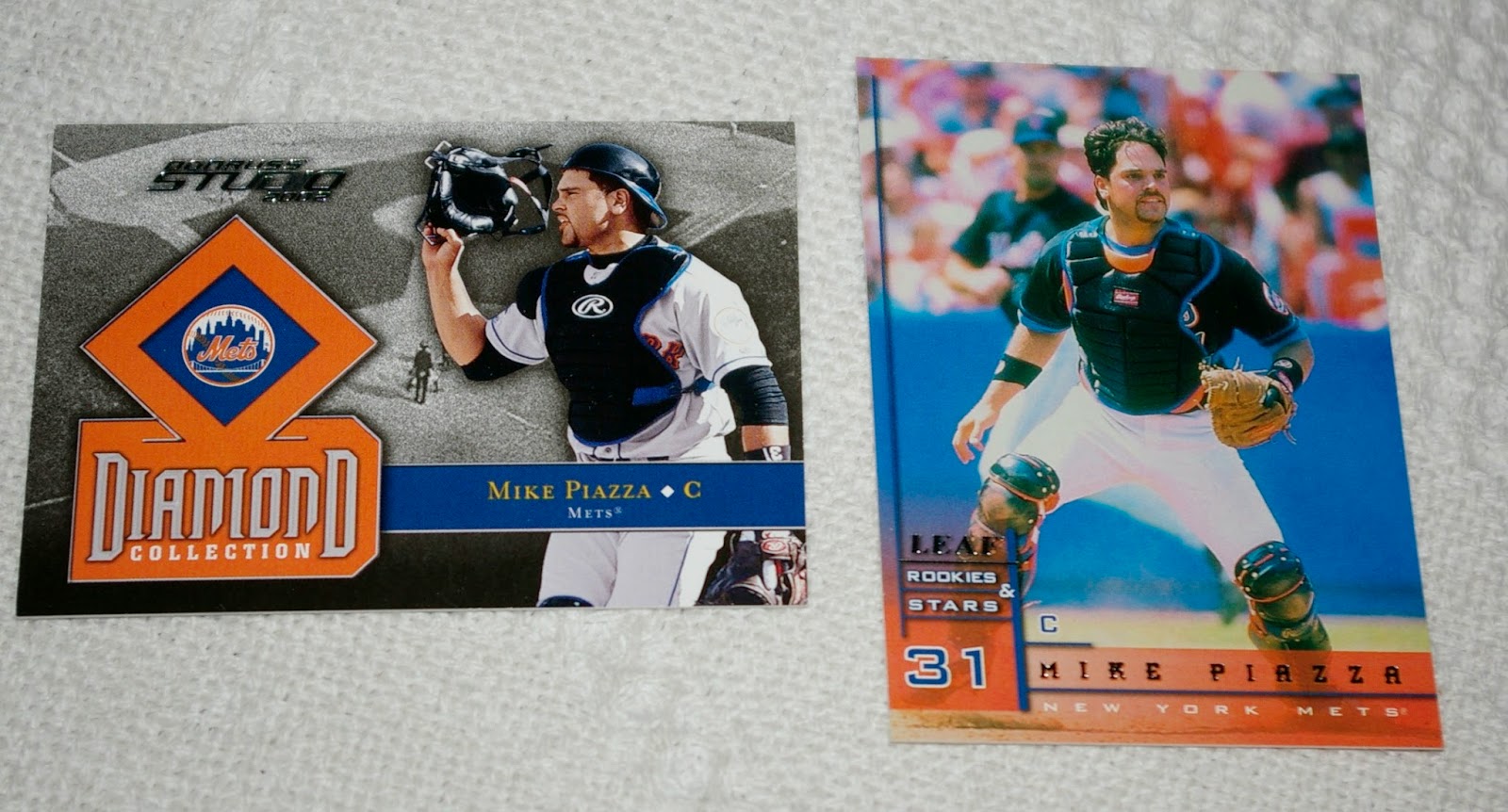 A couple Piazza cards I didn't have. 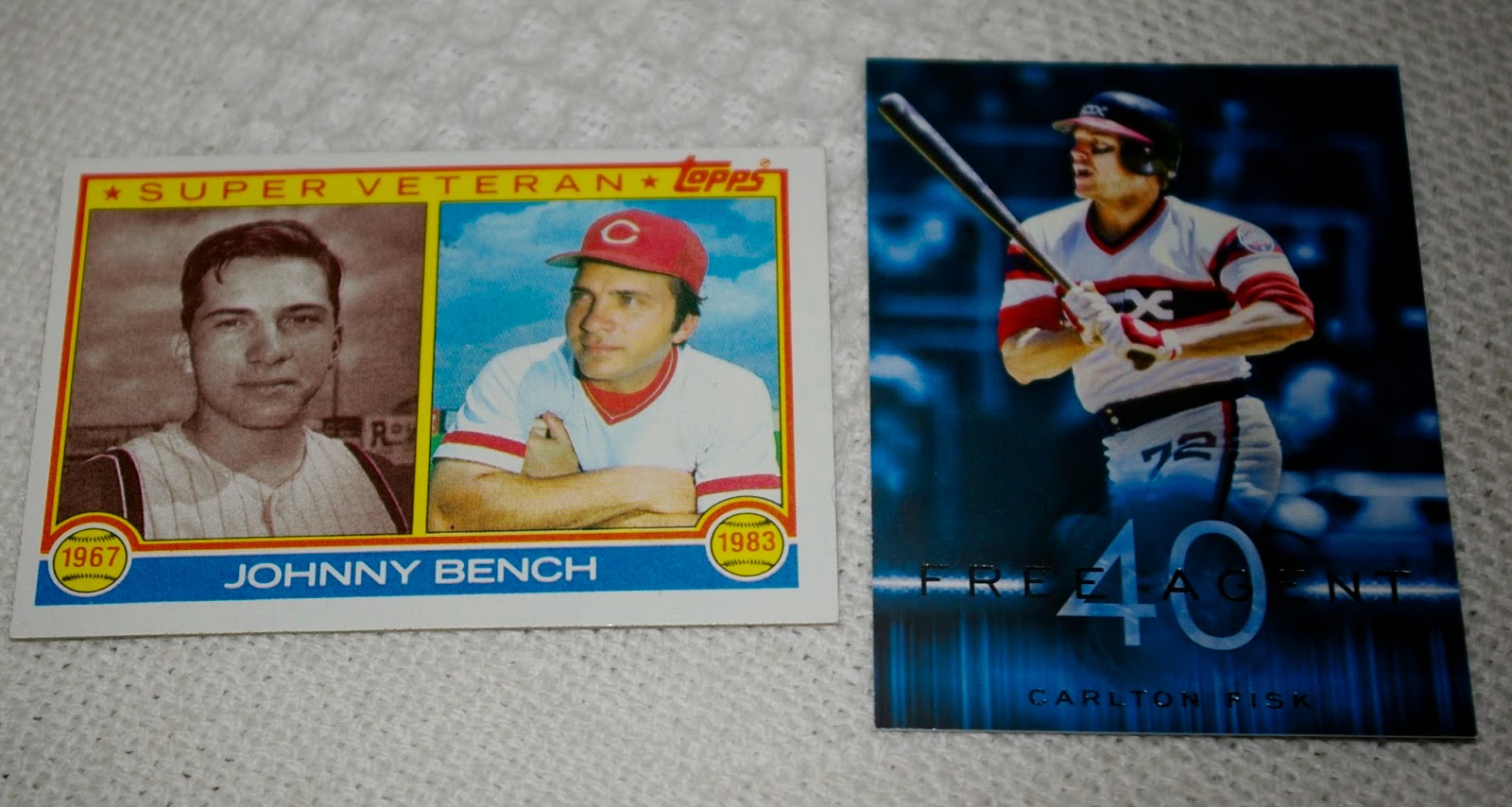 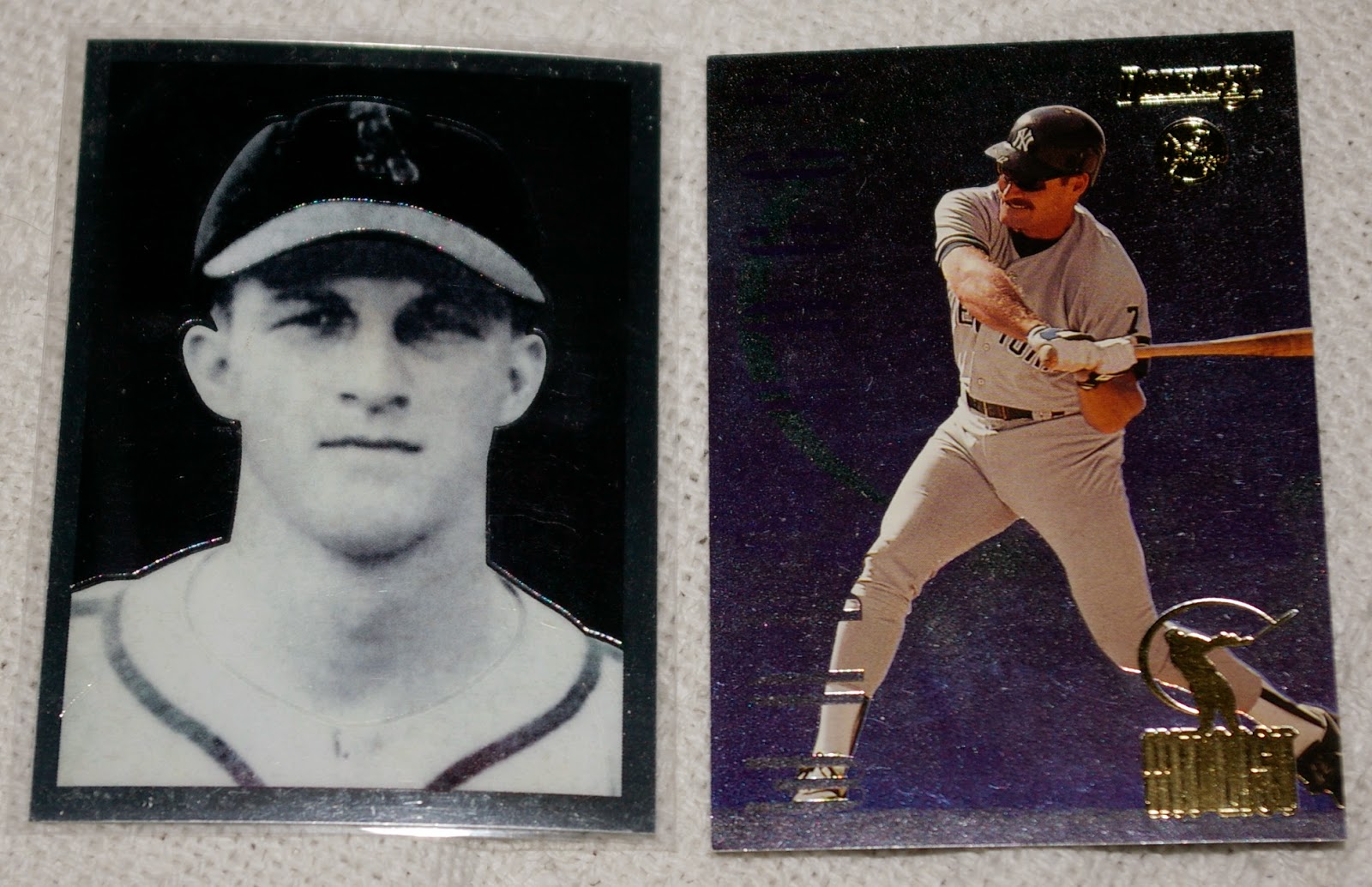 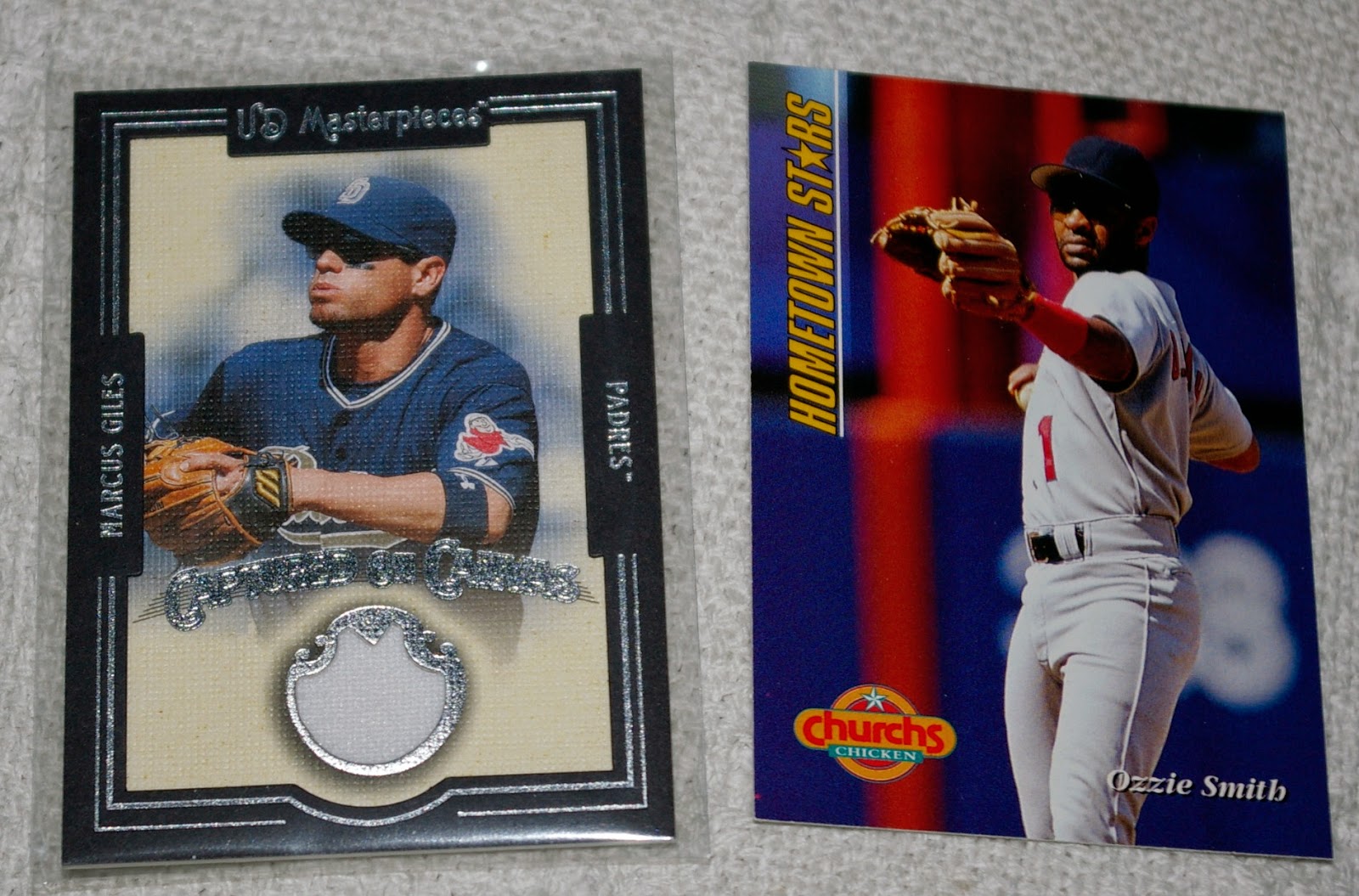 Marcus Giles jersey relic! And a Padres one, at that! Very cool. And love the Ozzie Smith oddball.

Great stuff. Thanks, Julie! I hope the cards I sent in return are ok.


Next up were a couple Listia wins from the same guy.. a couple Roberto Alomar cards. He sent each card in a separate PWE. I always think this is so dumb to waste a stamp when you could combine both for the same postage. But maybe that would throw off the dude's flow or whatever. And I guess it's true that every once in a while a buyer gets confused when you send 2 separate wins in 1 envelope. "Where's the rest of my stuff?" It's all there, buddy. 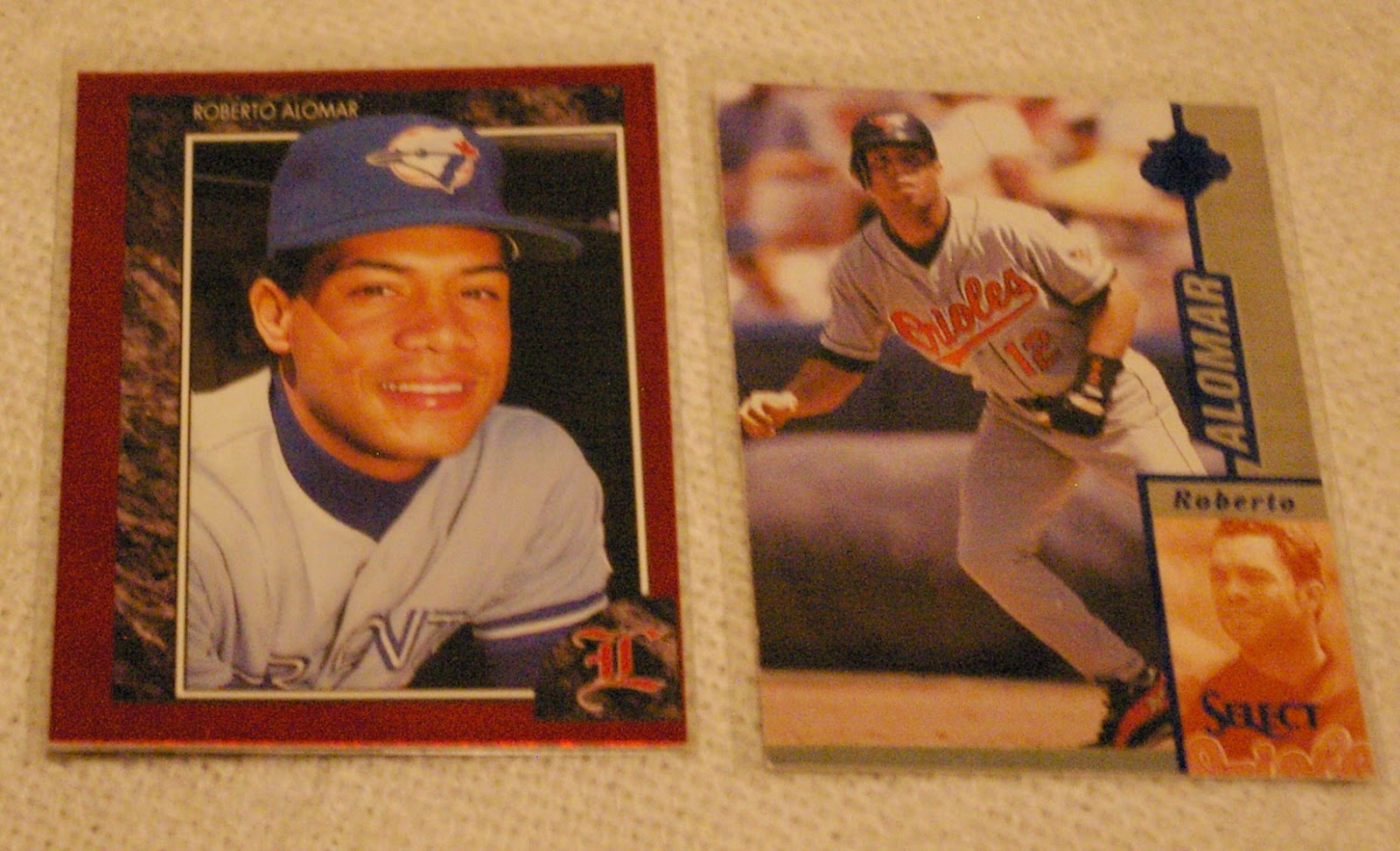 I thought I had knocked Robbie off my wantlist thanks to accumulating 100 different cards, but then I counted and came up just a few cards short. So back to Listia for a cheap card here and there. I think now I've made it. Or at least on the cusp. Need to count again.


Next is Bru from Remember the Astrodome. He read my recent post about Ken Caminiti and graciously answered my call for more Caminiti cards. 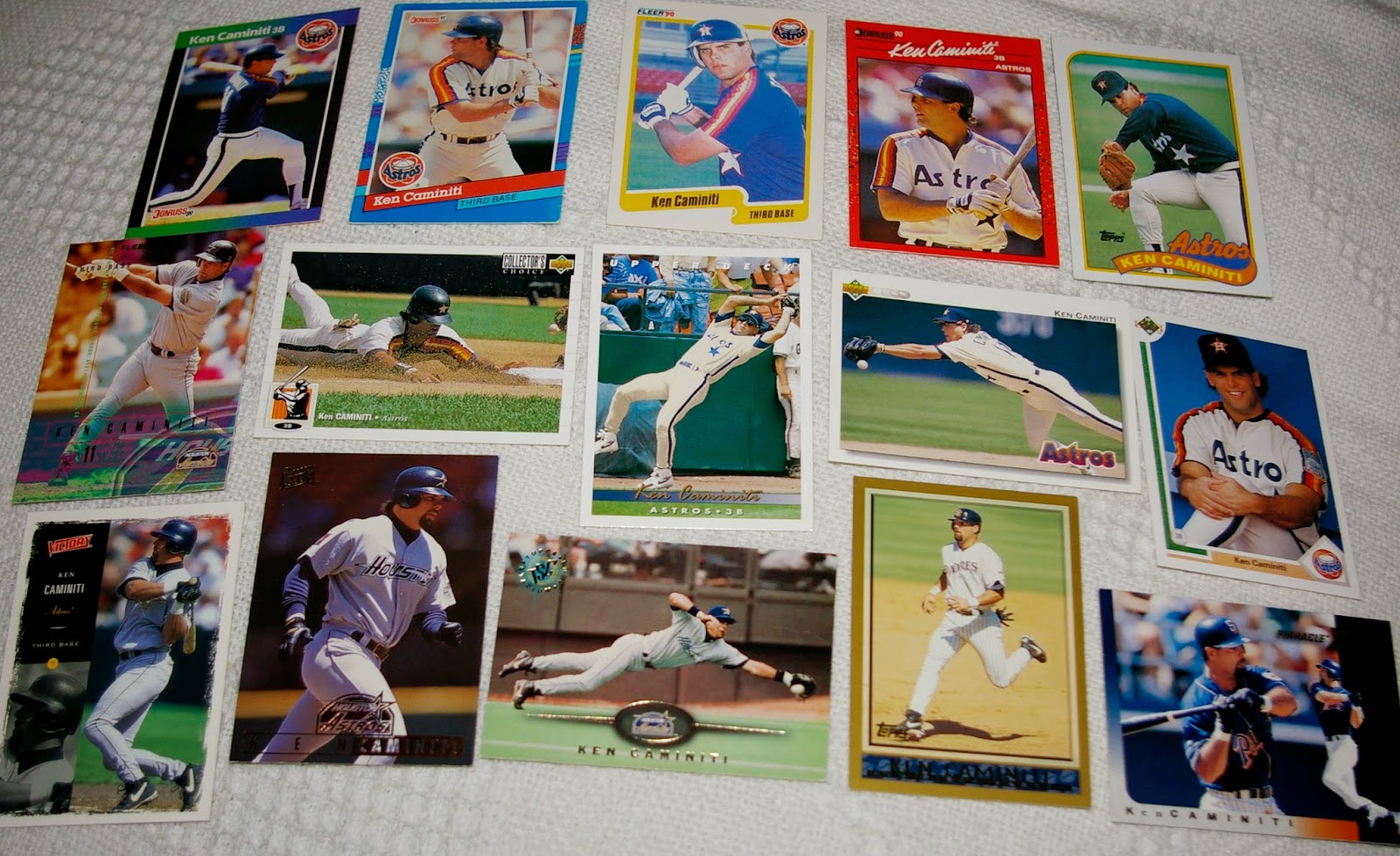 Awesome! My Caminiti PC is much more respectable now.

And Bru didn't just stop there: 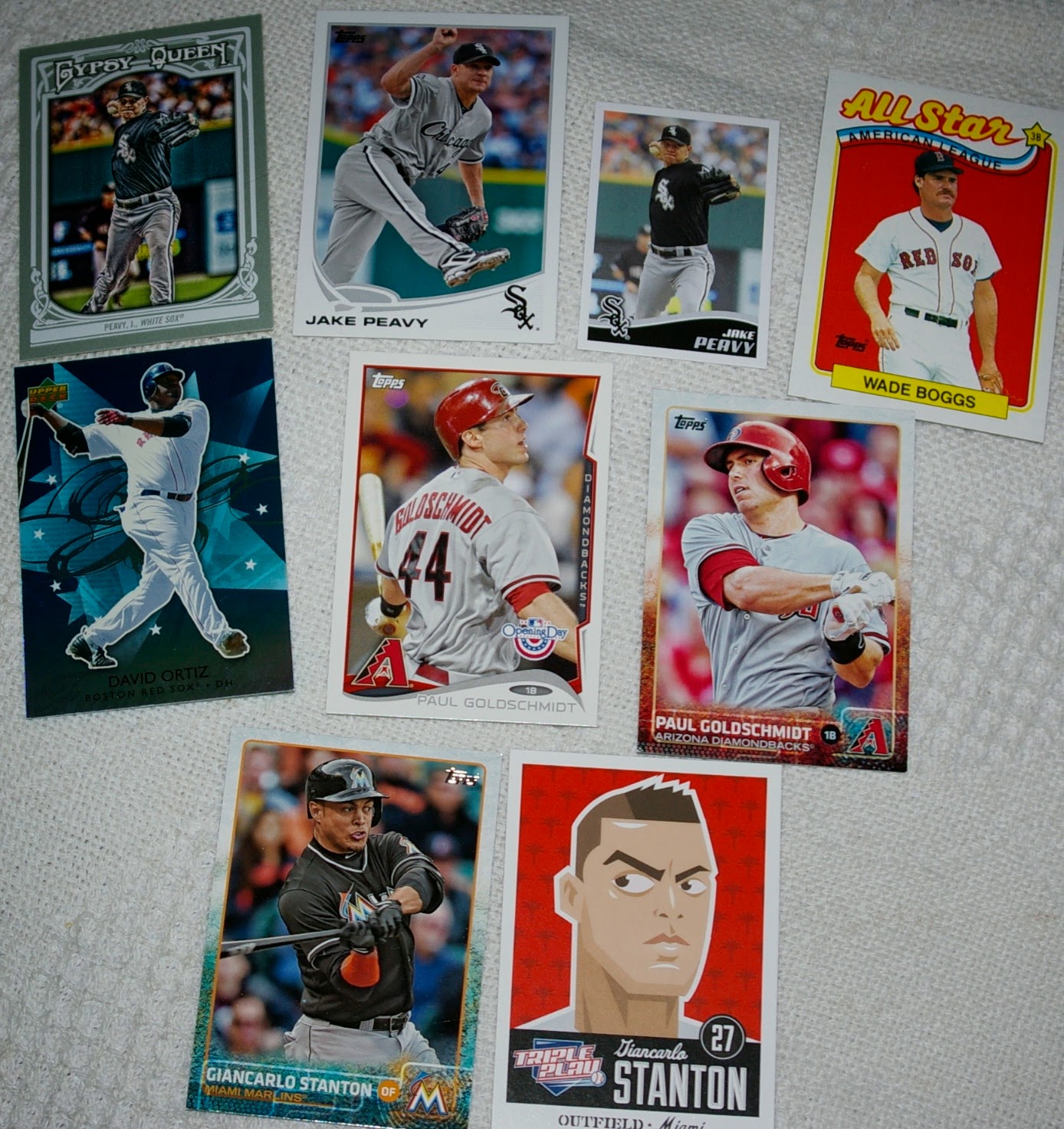 A few more guys I collect. Very appreciated! Thanks a ton, Bru. I'll try to hit you back with some cards you need soon.

Oh, and as for postage, Bru stuffed a long envelope and stuck on a couple 32 cent stamps. The letter arrived marked 27 cents postage due, but thankfully the mailman was cool and delivered it as normal.


We close with a stuft PWE (91 cent stamp, I think) from Johnny's Trading Spot. Man, John has really generously bombed me with cards over the past few months! 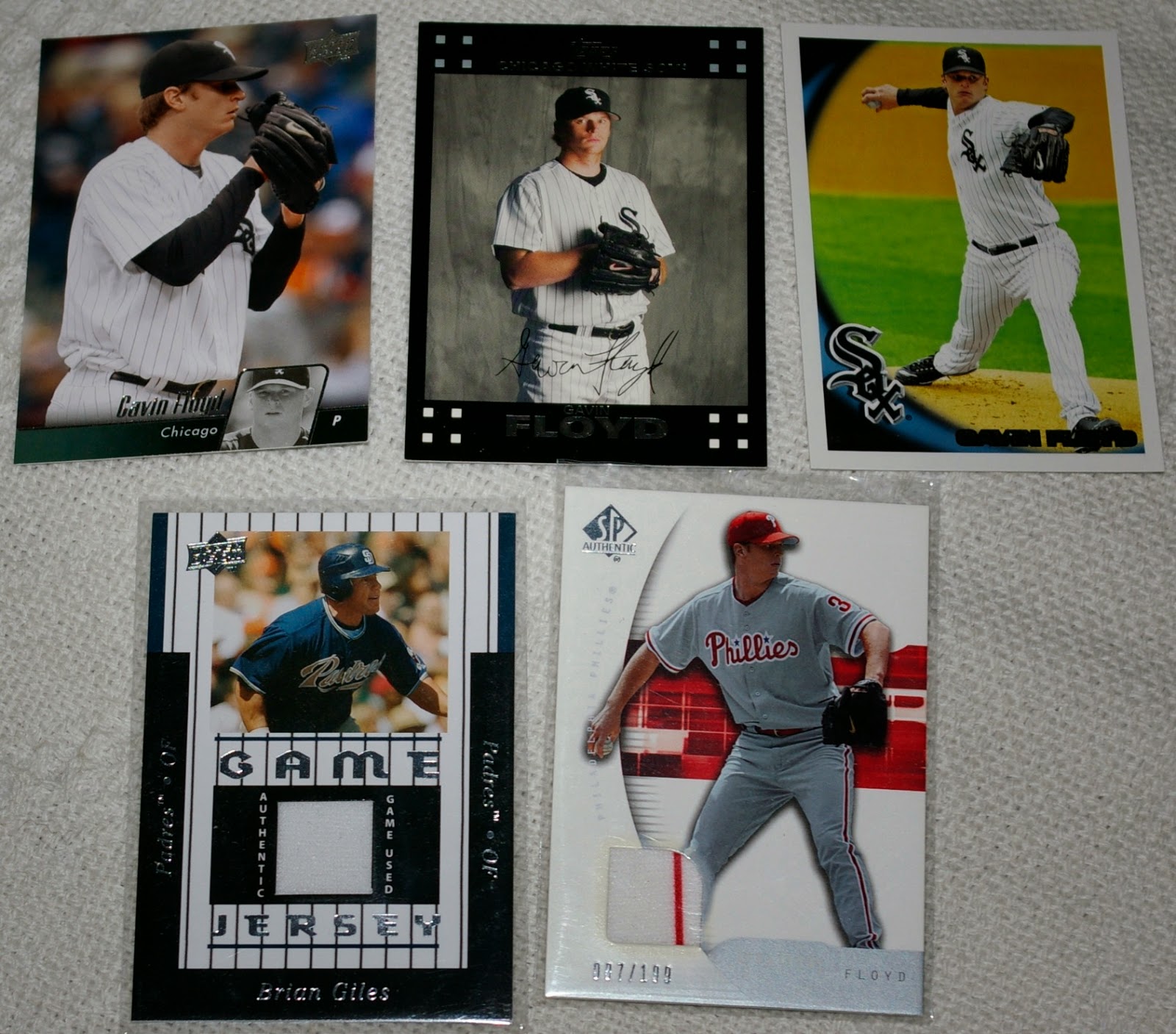 A bunch of Gavin Floyd cards, including a sweet numbered jersey stripe, and a nice looking relic from Brian Giles. 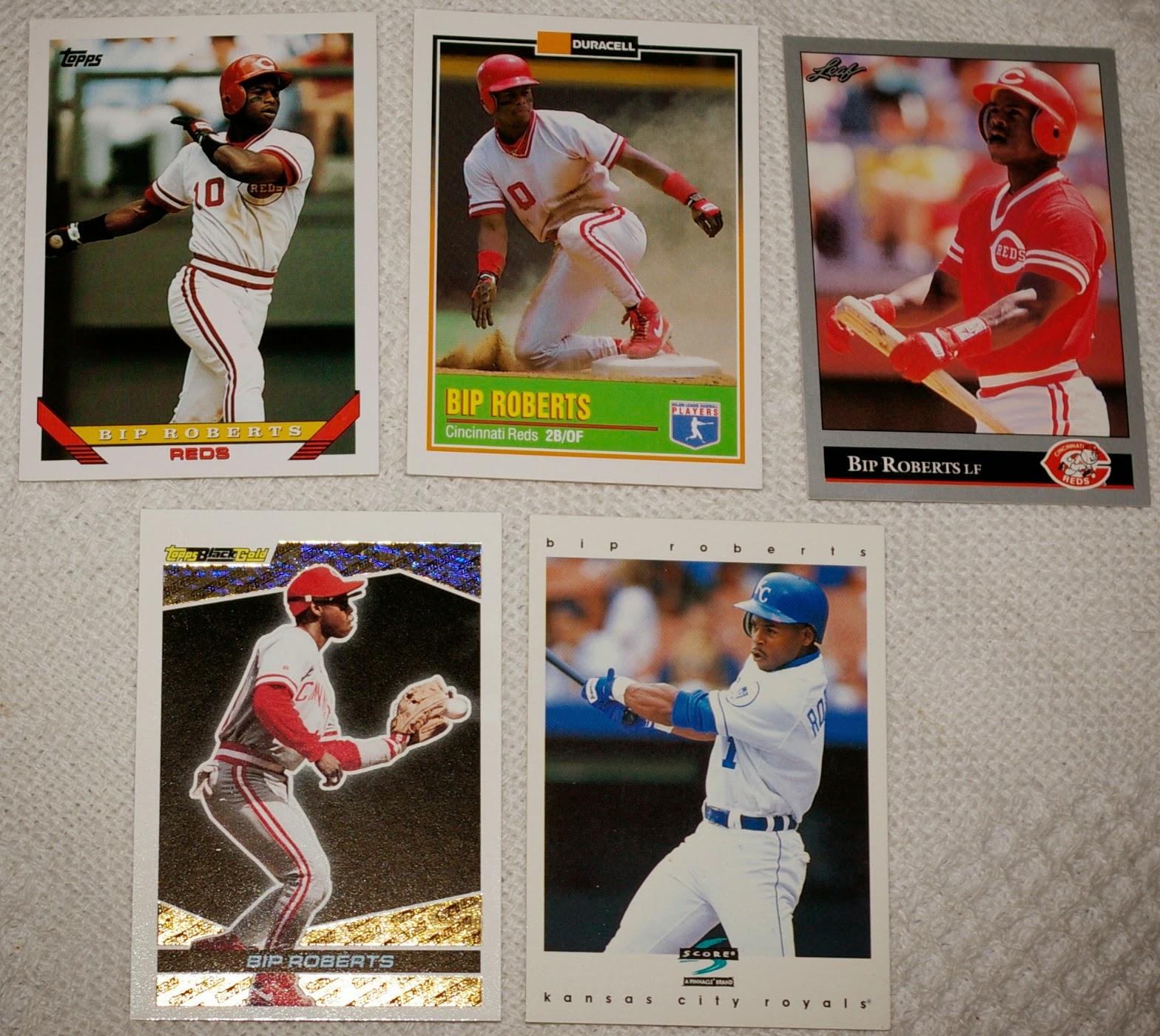 Bunch o' Bip! Love the Duracell card. Hell, I love all these, even if I already had some of them. Those Black Gold cards from 1993 Topps are still probably my favorite insert set of all-time. Close to the top, at least. 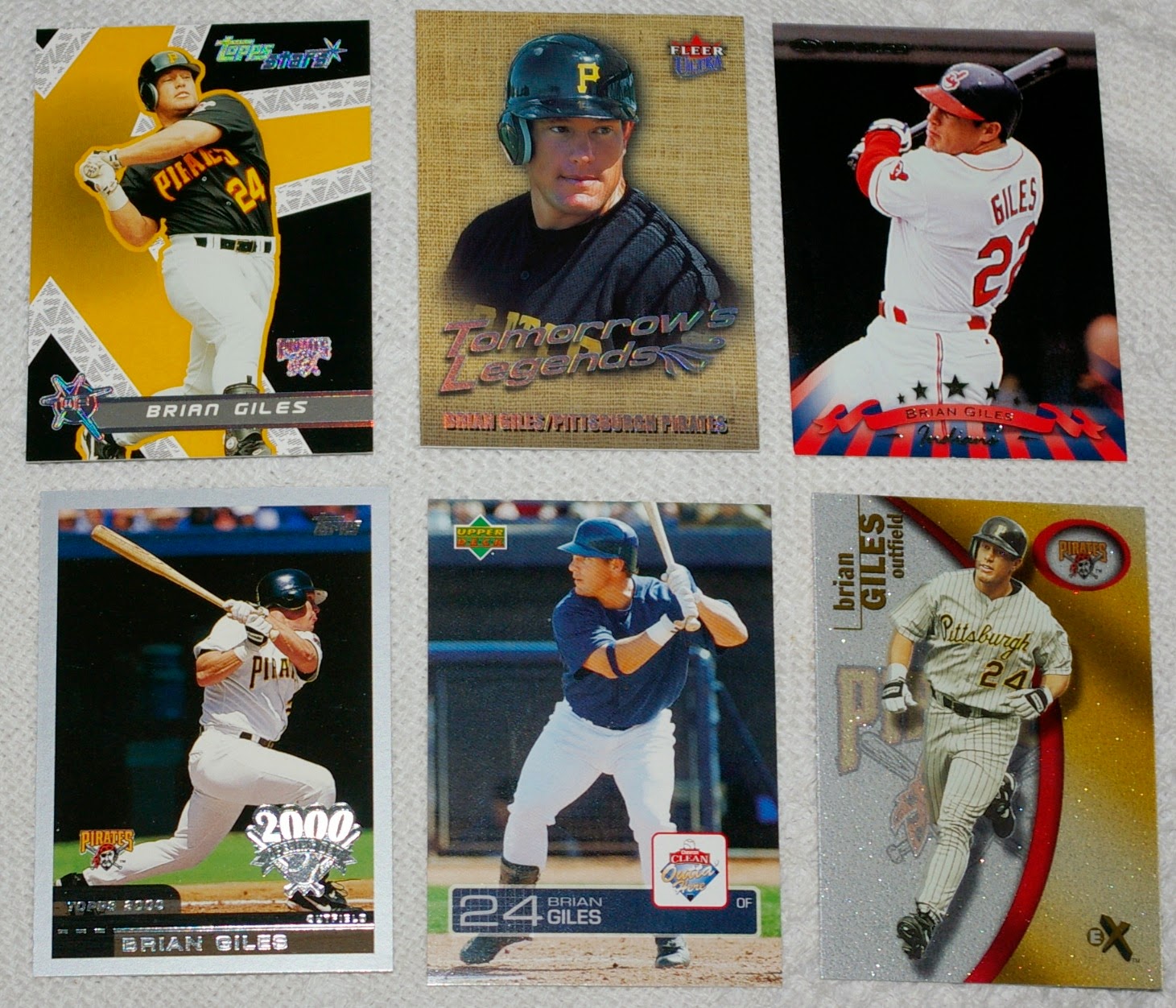 And more Brian Giles! Wow, this is a Giles Brothers-heavy post. I'm certain I've hit 100 different cards for Brian, so he's officially off the wantlist for now. I couldn't have done it without you, John! Thanks again. I've pretty much tapped out my Braves and other stuff I had set aside for you with the last package I sent you, so forgive me if it takes a while for me to get some return cards out your way.

There you go. Thanks again to Julie, Bru, and John for the cards.
And thank you for reading.
Posted by defgav at 3:57 PM