Even if we're just glowing in the dark


A few weeks ago I bought a few more '93 UD Fun Pack Glow Star cards (stickers) in an order from Sportlots or COMC or something.

I basically picked up the cheapest ones I could find (plus Griffey). Let's see, there's Junior, Benito, Baerga, Ozzie, Gooden, Clemens, and Salmon.

I've since officially added the subset to my wantlist, as I try to round up the remaining stickers (hell, I'd be fine with getting dupes, too.. I'd probably stick them somewhere.)

Speaking of glowing cards, I've also made a couple glowing customs already this year. First was an Anthony Rizzo sketch card, made by request for Lonestarr as part of the trade recapped here and here. 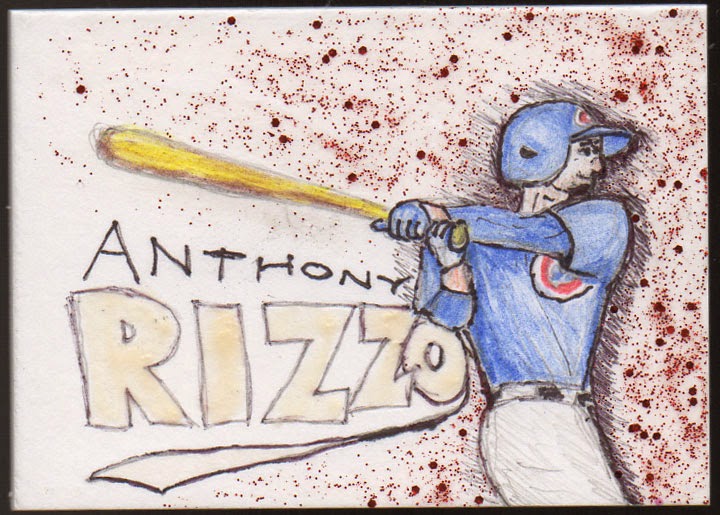 As usual, drawing faces is my main downfall. Really botched the chin on Anthony here. (Guess I took liberties and gave him facial hair that he doesn't actually sport.) And I didn't get too creative with the glowing; just the last name glows.

But CC seemed to be happy with it, so that's good.

So that was card #1 from 2015 Baseball Card Breakdown Originals.

The second card in this year's BCB set is the first physical custom I've ever made that's not a "1 of 1." I wanted to make my own blogger card along the lines of the fun auto cards that Fuji, Nachos Grande, and Jaybarkerfan have. But I took it to a ridiculous level by making my own "blog-used" relic card. 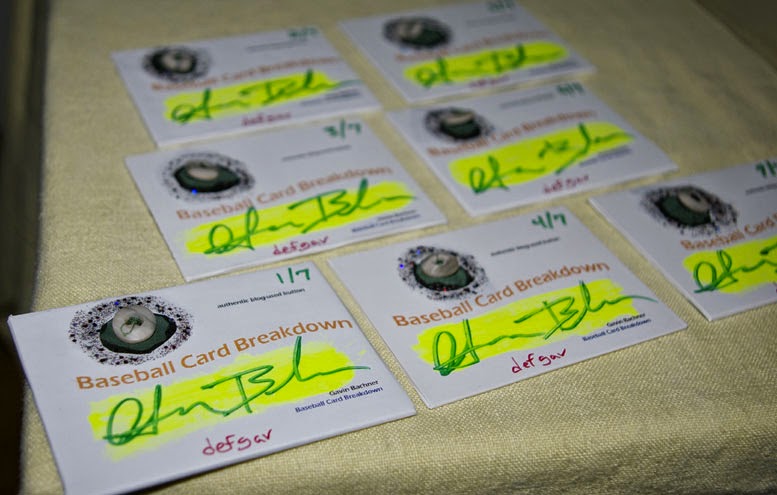 Autograph button cards! See, I had an old silk shirt that I had recently decided to turn into a rag because it was falling apart a little. Then I had this "relic" idea, so I brought the shirt out of retirement and wore it when I blogged one day. Then cut it up and made these button relic cards. And yep, you guessed it: that yellow area where I signed does indeed glow in the dark a bit.

That's probably as close as I'll ever come to seeing my name in lights.
(How have real card companies not done something like this yet?? There I go again, making the trading card industry's innovations for them. Just a reminder that I'm open to negotiate for employment opportunities, Topps, Panini, Upper Deck, et al. )

Anyways, 3 of these 7 have already been received by "friends of the blog" trader buddies. Still got 4 left to spring on other folks I trade with over the next several weeks. So do a couple trades with me and perhaps you'll get your very own Baseball Card Breakdown #/7 glow-in-the-dark blog-used button autograph card! LOL
Posted by defgav at 3:57 PM