Today was one of my biggest card maildays ever, thanks in part to a couple big eBay purchases arriving at the same time.

A year ago, I bought myself a 2005 Retired Nolan Ryan auto as a "wedding gift" to myself. This year, I treated myself to a "1st anniversary gift" by upgrading to the /25 refractor parallel of that same card. 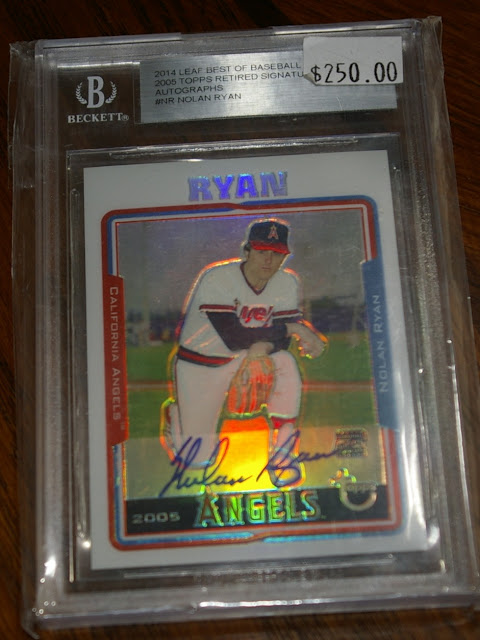 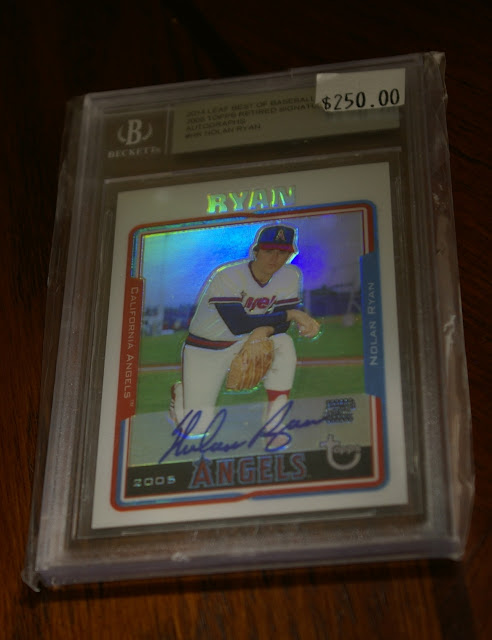 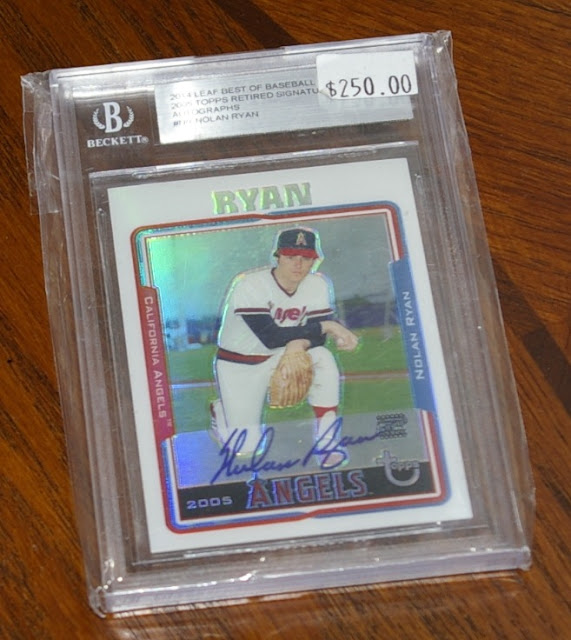 Perhaps the fact that it's "been claimed for another set" according to the slab helped confuse people keep the price reasonable. It was just a blaster more than I paid for the non-refractor auto. My plan is to sell the old one, maybe even make a profit on the deal, with luck. As I've said before, while I'm a fan of all autos from the Retired line of cards, the refractors look especially great. So I couldn't resist putting in a respectable bid for this one, and ended up winning with exactly my highest bid (much less than $250, btw).. so you know it came down to the wire.

And check this out! That wasn't the only Topps Retired Signature Edition Nolan Ryan refractor auto I received today! 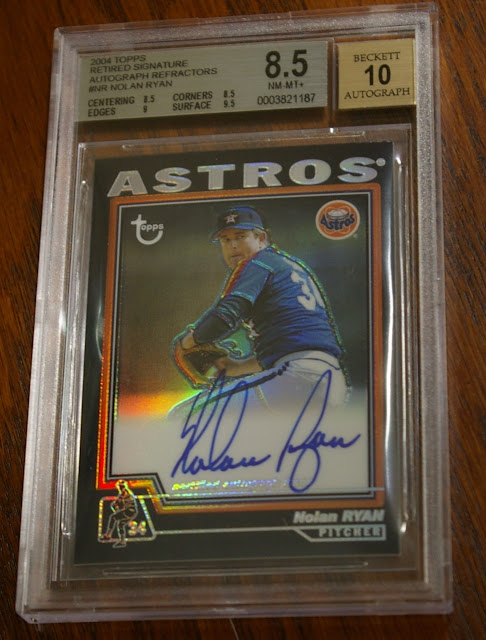 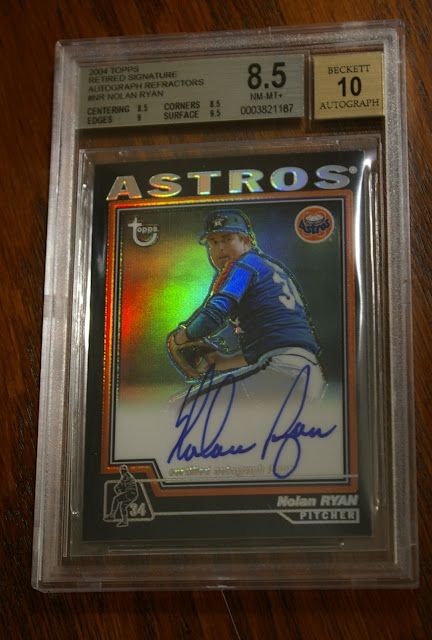 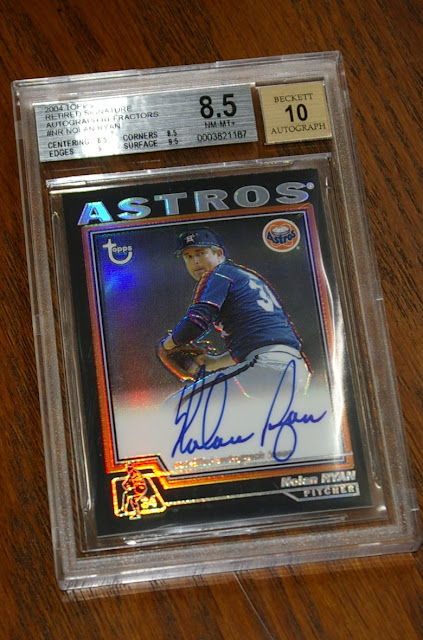 Yep, I got the 2004 Retired version, too! That's a big score for my 2004 Retired Refractors project. I had been kicking myself for passing up a "countered best offer" a few months ago for one of these. But now I'm glad I had restraint back then, because I was able to land this one for significantly less. (Still not cheap, don't get me wrong.) I think the 8.5 grade (a low grade by modern card standards) helped keep the price down. But truth is, I don't want any of my 2004 Retired's to be graded (I like them all in the "uncirculated" cases), so I plan to jailbreak it anyways (and slyly slip it back into an uncirculated case next time I find one with a loose sticker). This seller also had a few other big cards I need for my 2004 Retired project, namely refractors of Hank Aaron and Brooks Robinson, but they both ended up out of my range. Oh well. Patience is key. 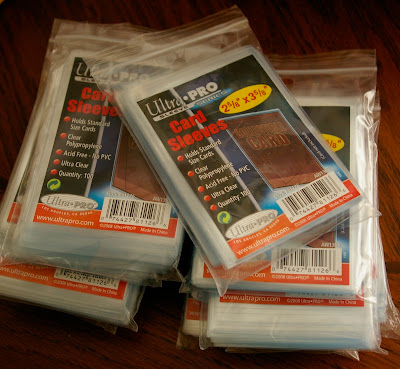 And a third eBay package that showed up today was a thousand penny sleeves. I'm a sleeves guy, not a binder guy, so I go through a lot of them. What was especially cool about this purchase is I made it just yesterday afternoon. The seller happened to be in the next town over (Vancouver, WA), and was prompt about getting it out the door, so I got next-day delivery. Hard to beat that.

It's funny because the 2004 Retired Nolan actually came from close by, too: Portland suburb Lake Oswego. But I guess the seller wasn't quite as on his game as the sleeves guy, as it ended up taking 4 days to show up.

One more card delivery arrived today, this a trade package from my pal Nate at Big 44 Sport Cards. 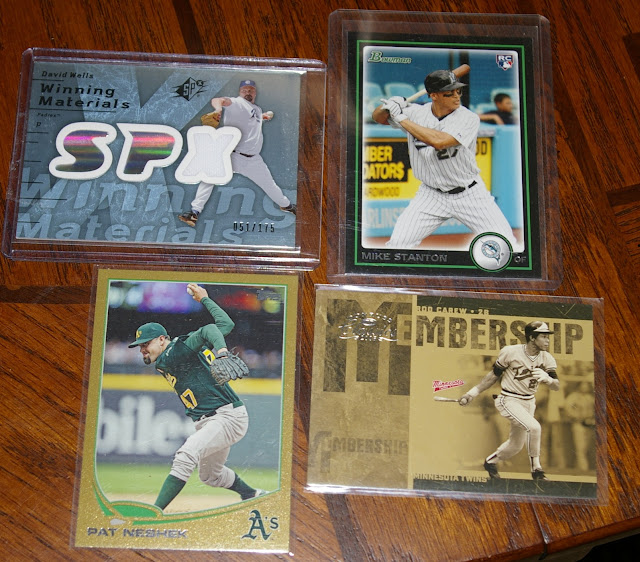 That's it for today. I'm gonna officially cut off the entry period for my big anniversary contest.. right.. NOW! However, one last chance: the first person to identify the bonus 80s song tease at the end of this MP3 cover of "Under the Milky Way" and post the artist/title of the song in the comments of this post will get 2 bonus entries. It's a recording I did with my "band" (actually it's just me on all instruments, plus my bud Karie helping out with vocals). I think it turned out really well! I'm putting up a new song every Friday of 2015 (follow us on Twitter!), and June is "80s Month", partially inspired by the release of Archives. Last week was a cover of "Safety Dance". Haven't recorded the song for this coming week, but hopefully I get something worked out in time.

Tomorrow I'll get all the contest entries sorted out in a randomized order and work toward finding some winners.
Thanks for swinging by!
Posted by defgav at 2:59 PM