I haven't gotten around to a Trade Roundup post in three weeks now, but luckily there haven't been too many trade packages arriving (or unluckily, I guess), so I haven't got too much of a backlog to get through. The real monster was a Priority box originating out of Johnny's Trading Spot. I already showed off some Star Wars discs in yesterday's post. In addition to those, there were a ton of cards, mostly 90s Padres. With me being a player collector, a lot of the various random Padres I have no use for, but with John casting such a wide net, I'm still able to come up with a fat stack of keepers when he drops a box on me. Let's take a look. 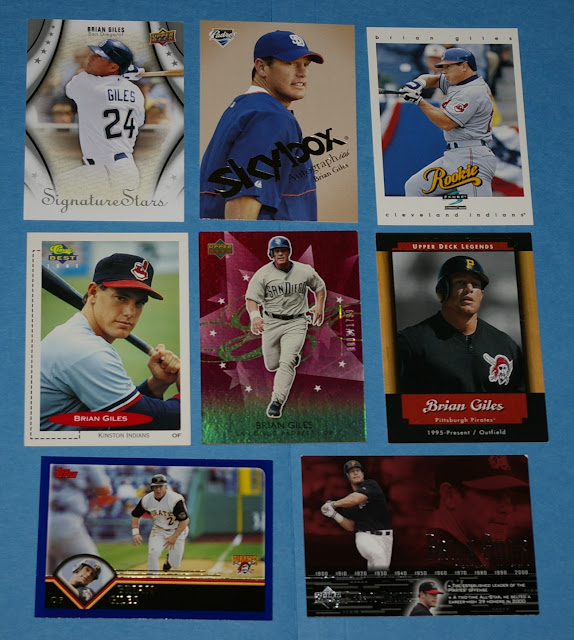 Here's a nice lot of Brian Giles cards, including a #'d card in the middle, as well as a minor league card that I shared a personal story about last year in my big Brian Giles post. 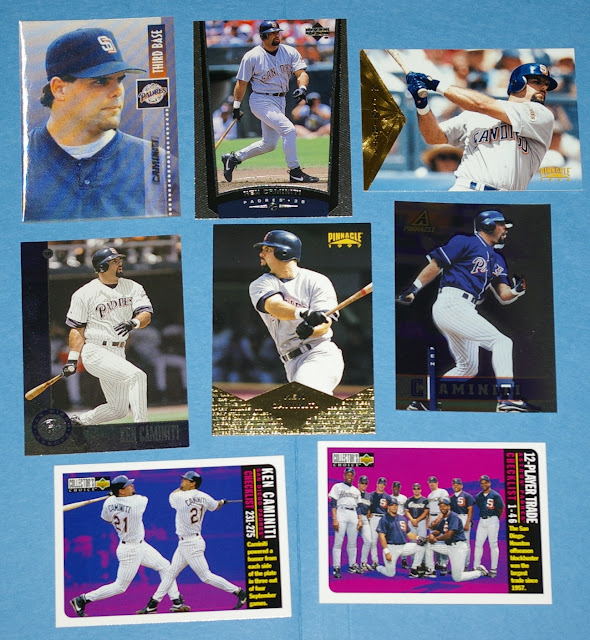 Cammy! Pretty sure most of these were needs. I'm about ready to "complete" my Caminiti collection, and recently picked up 3 certified autos I was missing as finishing touches. I'll probably show off my Caminiti PC in a forthcoming post once I get it all sorted out. It was just announced today he'll be posthumously inducted into the Padres Hall of Fame this year, which I'm happy to hear. 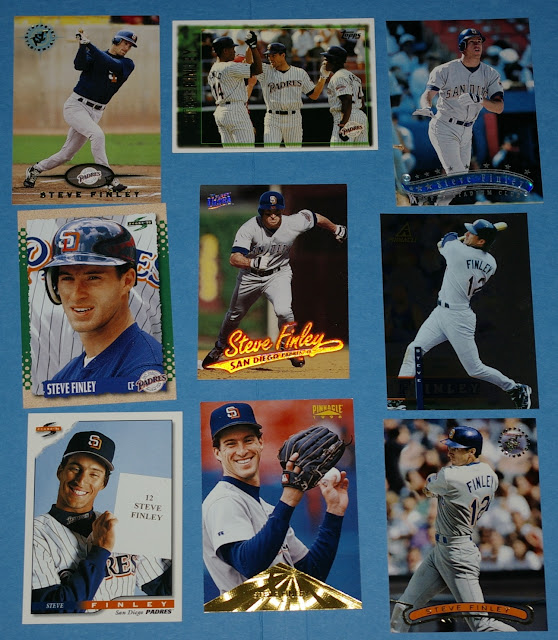 Steve Finley is a guy I never really actively collected for whatever reason even though I liked him during his days in San Diego, but thanks to trades like this one and the box I got from Marcus a while back, I'm pretty sure I've now got him into the Hundred Card Club. Just need to score a certified auto one of these days to top off the PC. 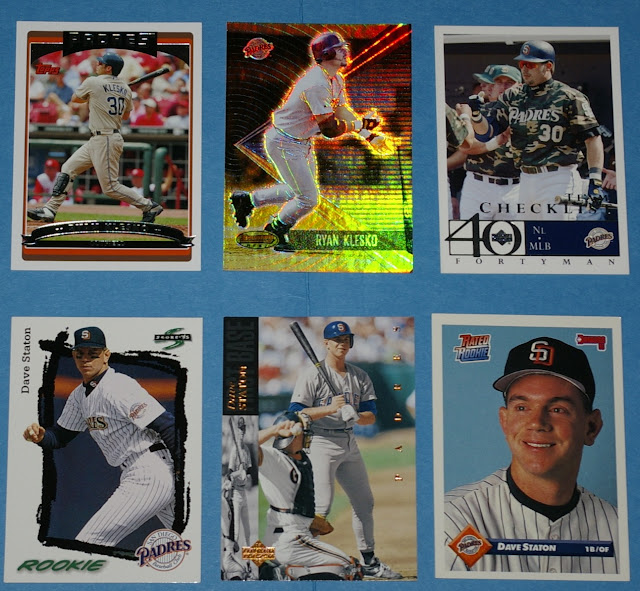 Ryan Klesko is another former Padres star I resisted collecting for a while, but gave in not long ago and am probably at 100 different cards by now. Picked up a couple autos in my latest COMC order which I should be showing off soon.
Dave Staton was a prospect I was excited about as a kid, but of course he was a bust at the major league level. Still, I kinda like collecting his cards for sentimental reasons. 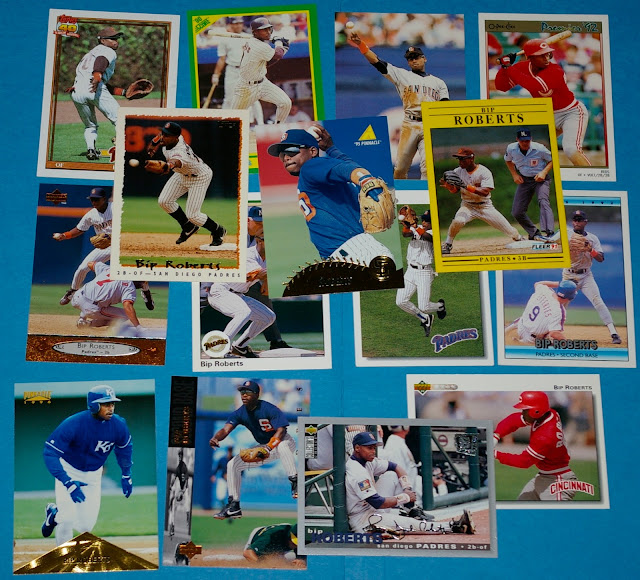 Bip! I showed off my Bip Roberts collection a month ago. While most of these are dupes for me, I'm pretty sure there are 2 or 3 I need in here, like that Collector's Choice silver signature parallel. 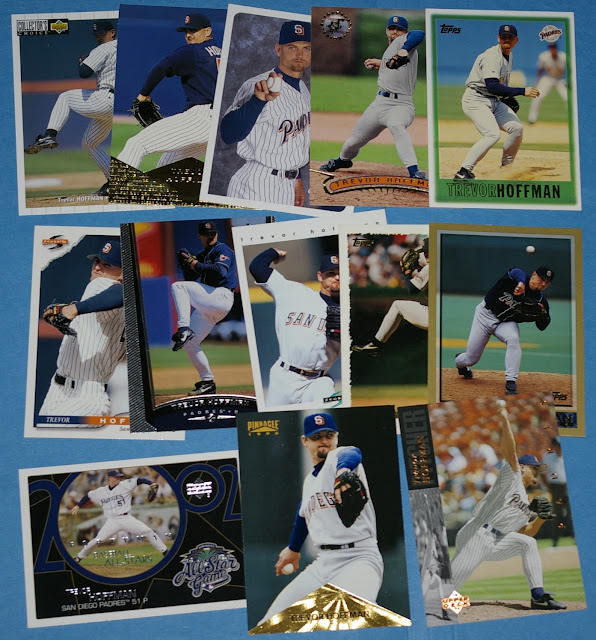 Probably a few Trevor Hoffman cards I didn't previously own in here. I posted my Hoffy PC last year, though I've picked up a few cards since. My money's on him getting the call to the hall next January. I hope these are dupes for John, or else he may need them back for his HOF binder soon. 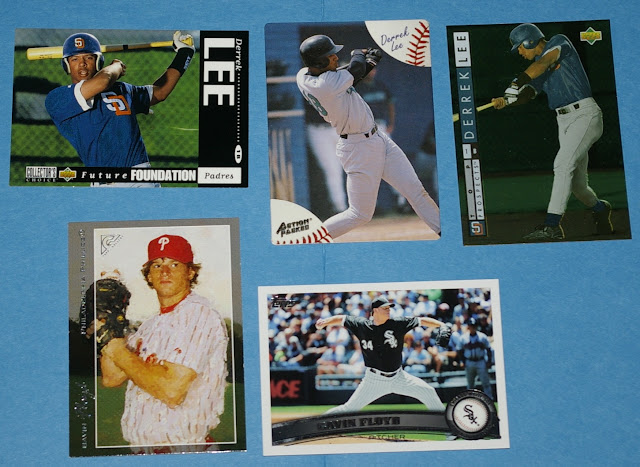 Three early Derrek Lee cards and a couple of Gavin Floyd, including a weird oil painting looking Gallery card I didn't have. 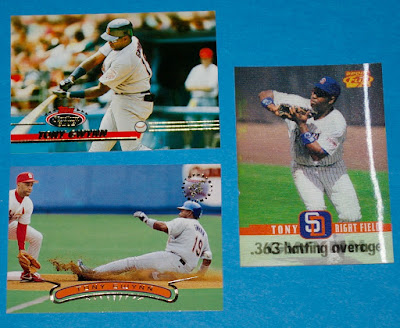 Tony Gwynn is always welcome in a trade package. 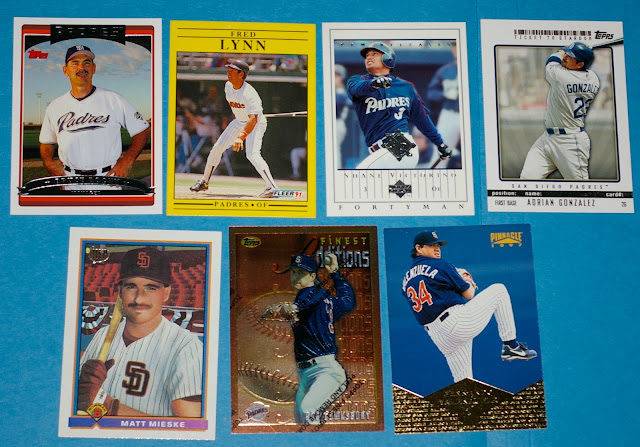 A few other misc Padres. Shane Victorino as a Padre is a rare sight. Matt Mieske, like Dave Staton, is a guy I had high hopes for as a kid but he never cashed in on his impressive minor league numbers. 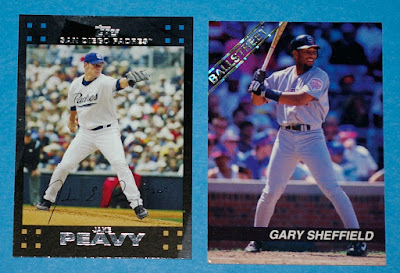 This Peavy seems to be some kind of weird manufacturing error where a coating of gloss or whatever was misaligned. Either that or somebody left it in the sun for a few years with another card lying on top of it. 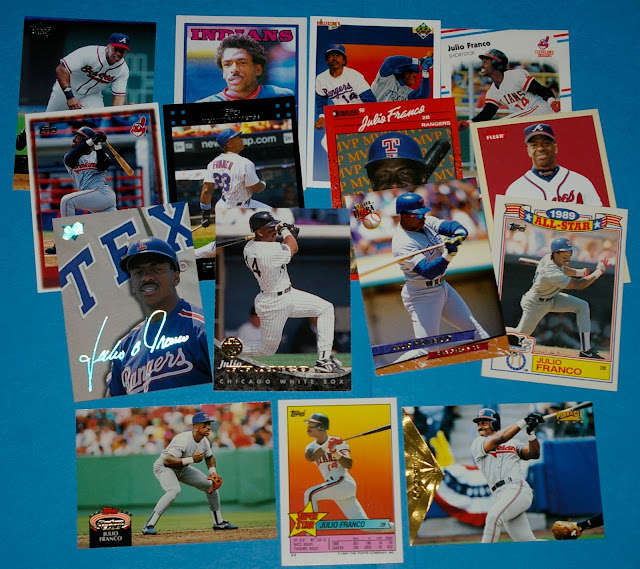 We'll finish off the highlights of John's box with this great Julio Franco lot. Last month when I posted my Julio PC, I was at 90 cards, just 10 short of my goal. These comfortably push me into the Hundred Card Club promised land.

Big thanks, Johnny! I've sent you a return package a few days ago, and while nowhere near as big, hopefully there're some cards in there you'll appreciate.

Next is a trade with GCA of The Collective Mind. This was kind of an odd trade. He read my Dave Kingman custom TTM success and misunderstood when I said I had 2 signed Padre Kingman customs, and he inquired about my extra. But I only sent one custom to Kingman, the other custom I was referring to was the different one Rod gave me. But my interest perked by GCA mentioning he had '71 Topps cards of Tom Seaver and Al Kaline to offer, a couple of the low-number star cards needed for my setbuild, I offered to do another TTM on his behalf. I know I made the offer, but honestly I really did not enjoy this process and henceforth will try to stick to this policy: I will no longer send out TTM requests on anyone else's behalf. I'll print out unsigned customs to send you and give you some pointers for sending out the request yourself, but I don't feel good about sending the request myself just to turn around and trade it. It's different if I'm sending a request for myself and get an extra or two to share (like with my Ron Cey TTM or my epic mailday from Wade Boggs), but I just feel like an ass telling somebody, "I'm a big fan of yours; please sign this for me!" just to flip it to someone else. I also did this once for jaybarkerfan, but at least with that one I was able to get an extra to keep for myself. I hope Wes shows it off on his blog one of these days because it came out pretty nice.

Anyways, back to the trade with GCA, he sent me some good stuff. 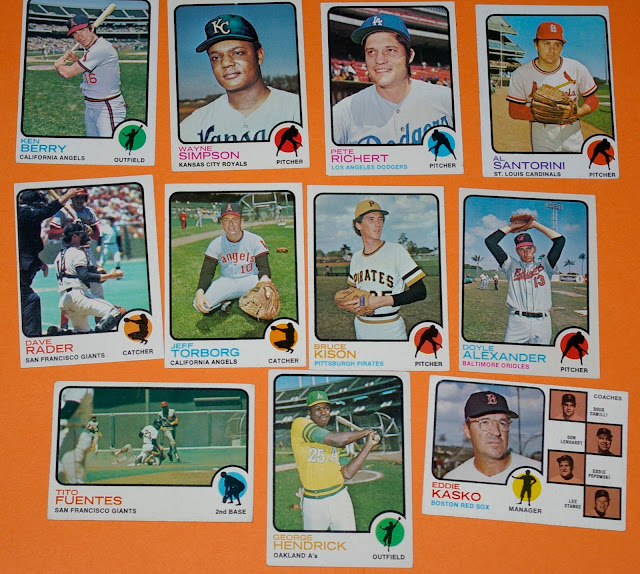 A bunch of probable upgrades to my 1973 Topps set. I'll need to go through and do some comparisons, but odds are most of these will be upgrades for me. 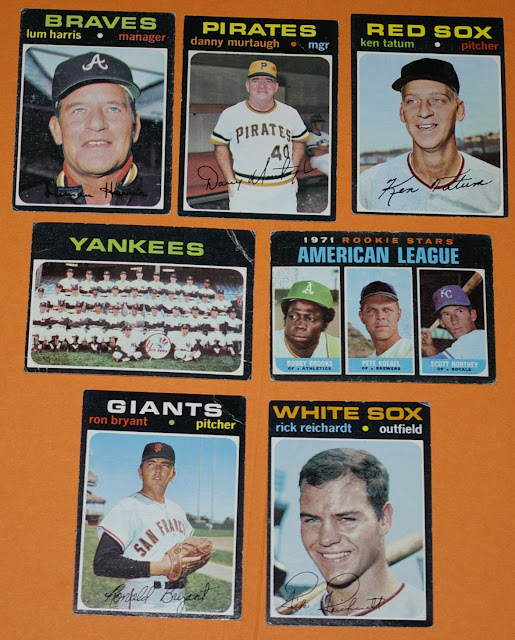 Here's a nice lot of 1971 Topps that helps me crack the 4/5's complete mark with that set. 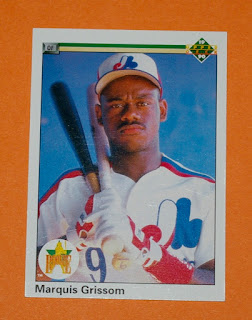 Greg even threw in a '90 UD Grissom! Always appreciated on my quest of 1000 copies of this.

Unfortunately I was only able to dig up a couple cards on his wantlist to send off along with the Kingman signed custom, so it wasn't enough to score me the 71 Seaver and Kaline that had gotten my interest in the first place. Oh well. I picked up a cheap 71 Seaver in my latest COMC order. If anyone has a 71 Kaline, I'm still looking for one.

Lastly, here's a one-card PWE from a guy named Bill who collects Billy Ripken "f-face" and related cards who wanted some of the silly such customs I made a while back. 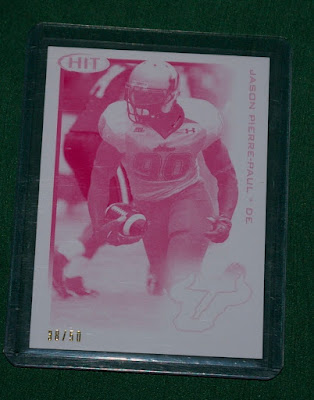 Bill didn't have anything from my wantlist, but offered this football card #'d 38/50. I can't lie and say I was personally excited about this card, but I went ahead and agreed to the swap since Jason Pierre-Paul is a New York Giant, so I figure I could send this to Sport Card Collectors in a future trade. (Spoiler alert, SCC!)

Thanks again to John, Greg, and Bill for the trades.
Posted by defgav at 3:31 PM