Time for more of my haul from the card show. To refresh your memory, I picked up 120 cards for a quarter each. After such a big haul, I often grapple with how I should work the cards into a blog post.. trying to find a theme, or separating the cards into groups or whatnot.

This post features a few guys I collect, each represented by a pair of serial numbered cards. Um, perhaps we could make this more interesting by trying to declare a winner between each match up. Yeah, let's give that a shot. 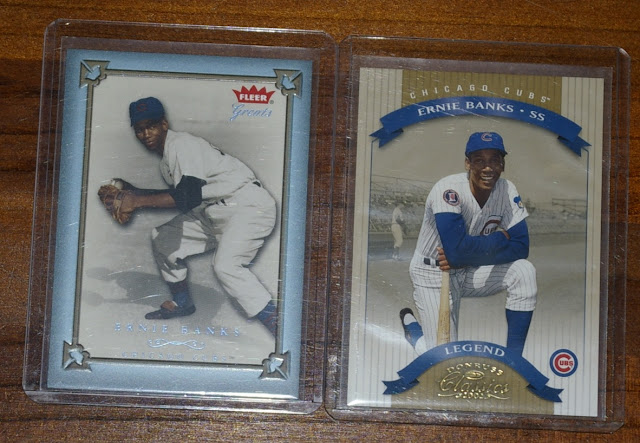 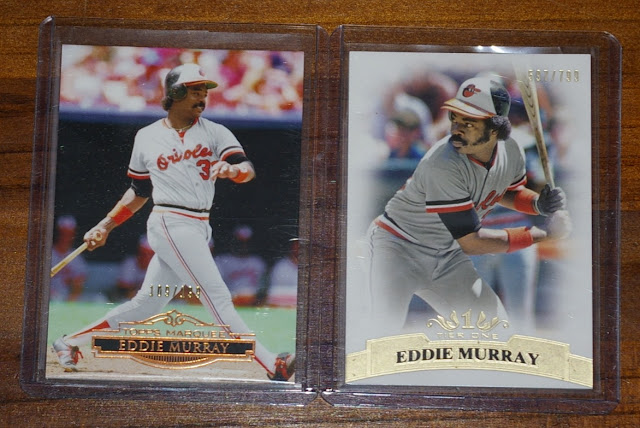 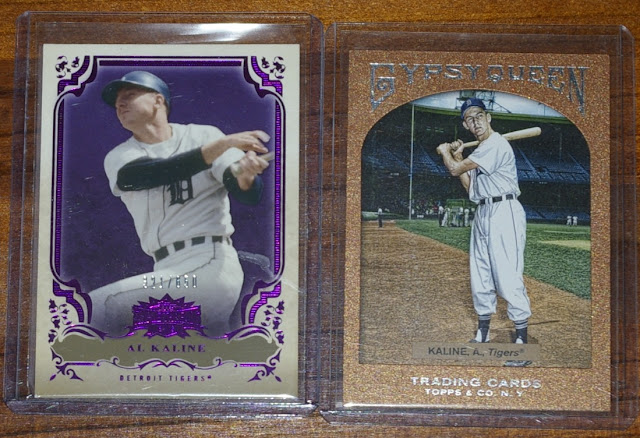 Al Kaline 2013 Triple Threads 321/650 vs 2011 Gypsy Queen 188/999. GQ has the cool gold border, and nice to see the stadium background, but ultimately it's a boring, awkward pose. The TT card has got the action. Hate to seem like I'm awarding the win to the lowest numbered card every time, but yeah, Triple Threads wins this one. 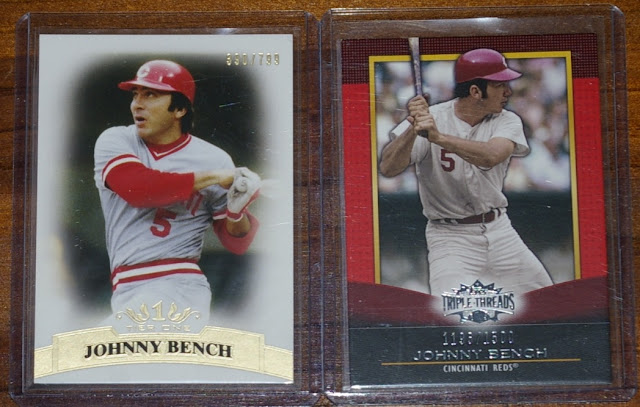 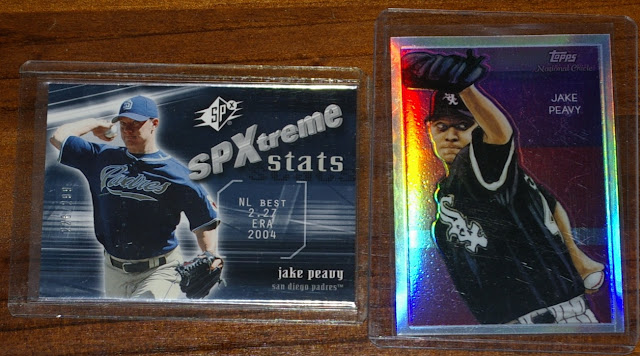 Jake Peavy 2005 SP Collection 228/299 vs 2010 National Chicle 293/499. We're taking a break from the HOFers for a former Padre standout I kinda still collect even though I should probably call the PC good at this point. Gotta go with the Chicle here. That set is hit-or-miss with the artistic renderings looking either kinda cool or pretty dumb, but this is a good one. Nice refractor shine to it. 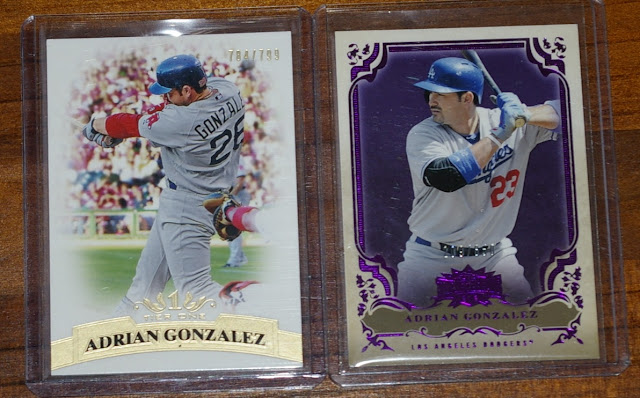 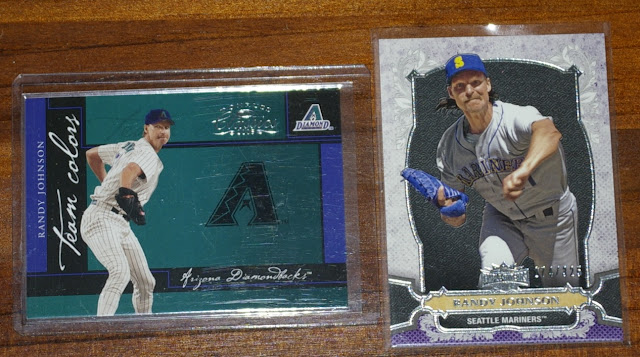 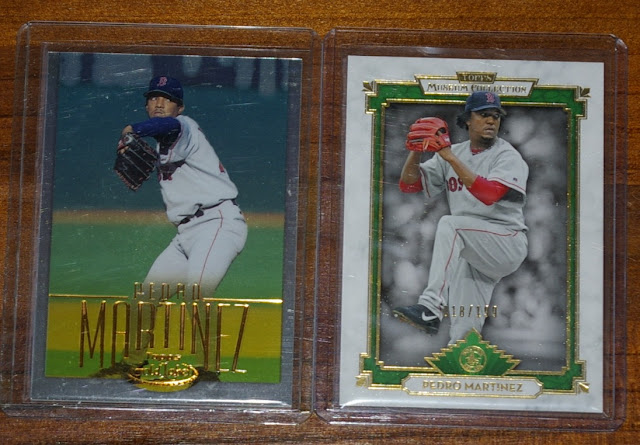 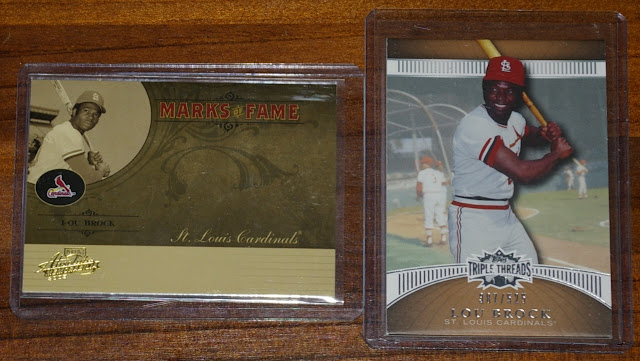 Lou Brock 2005 Playoff Absolute 12/150 vs 2010 Triple Threads 387/525. Our final bout, this one is not even close. The Playoff card has the lower number, but it's obviously a naked card designed for an auto or at least a relic. TKO for the TT card here.

So there you go, a pair of numbered cards for a bunch of Hall of Fame guys plus a couple former Padres crashing the party.

Thanks for reading!
. . .
Oh, now that April is over, let's check out the handwritten post contest entries. There were a dozen people who made such a post and commented on the entry post with the URL to it.

I know there were a few others who did handwritten posts but didn't officially get in on the contest due to not posting the link in the comments. But rules is rules. I did kinda bend the rules a little for JediJeff and his punch card post, but it was in the spirit of the contest, so I let it count.

Did you guys see a spike in hits on your handwritten posts? The one I did is easily my most popular post of 2016 so far, with nearly 900 views! I hope bloggers had fun with the concept and maybe even do another handwritten post once in a while for the heck of it, even without the incentive of a contest.

Ok, so let's assign numbers (not pick a winner) to the entrants.. 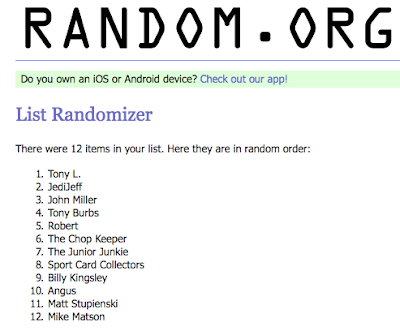 Let's say the winning number is the total number of runs scored in this afternoon's Padres vs. Dodgers game (5/1/16). Anything over 12 loops around (so, 13 = Tony L). The game has already started as I type this (no score in the 1st inning), so I'd better get this post live ASAP. Good luck to all participants!

UPDATE: Kershaw pitched a shutout and drove in the game's only run to beat San Diego 1-0. So Tony L. stands as the winner. Congrats, Tony!
Posted by defgav at 1:22 PM