Haven't done one of these in a long time! This is a series where I'll feature 4 or 5 random things I've held onto since my childhood.

I usually try to kick off these posts with something baseball related or at least legitimately collectable to keep it on-topic for the blog. Let's see what I can dig up for today...

Oh cool! I thought I had lost this! Just found it now as I was looking through a box of stuff for items to feature in this post...

When I was in 8th grade, Pat McCormick came to my middle school and gave us a little motivational talk about following your dreams and whatnot. Not to be confused with the actor of the same name, this Pat McCormick was an olympic diver. Her Wikipedia entry is short and sweet, so I'll go ahead and quote it here: 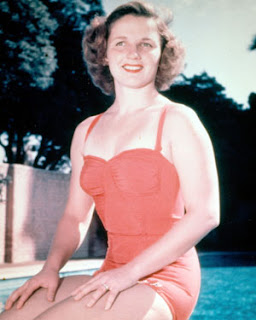 Patricia Joan "Pat" McCormick (born May 12, 1930 in Seal Beach, California) is a retired female diver from the United States, who won a total number of four gold medals by winning both diving events at two consecutive Summer Olympics (1952 and 1956).
As a child in the 1930s and 40's she was notable for executing dives that were not allowed in competition for female divers (dives reputed to scare most men) and for practicing off the Los Alamitos Bridge in Long Beach, California Harbor.[1]Patricia McCormick also appeared on an episode of "To Tell The Truth" dated February 26, 1957.
After the Olympics McCormick did diving tours and was a model for Catalina swimsuits. She served on the Los Angeles 1984 Summer Olympics organizing committee and began a program called "Pat's Champs"—a foundation to help motivate kids to dream big and to set practical ways to succeed.[2]


That assembly at my middle school must've been part of the Pat's Champs program. After her talk, I was among the several students to ask for her autograph. 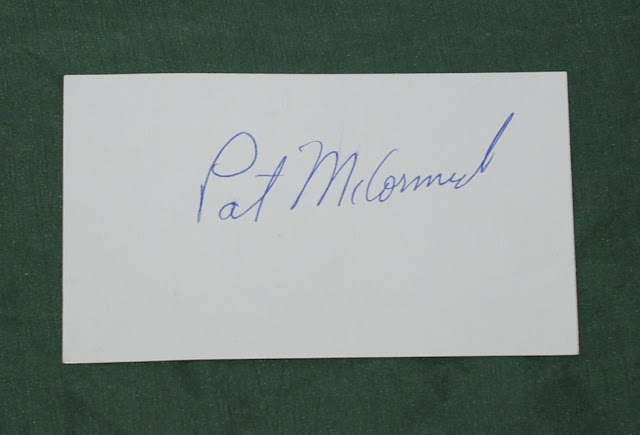 I'm so glad I held onto this! It's a nice addition to my autograph collection, and obviously extra special to me as one of the very few in-person autographs I got as a kid. Maybe one of these days I'll spice it up by making a custom overlay for it. It's bigger than standard card size, but small enough to fit in a Card Saver. 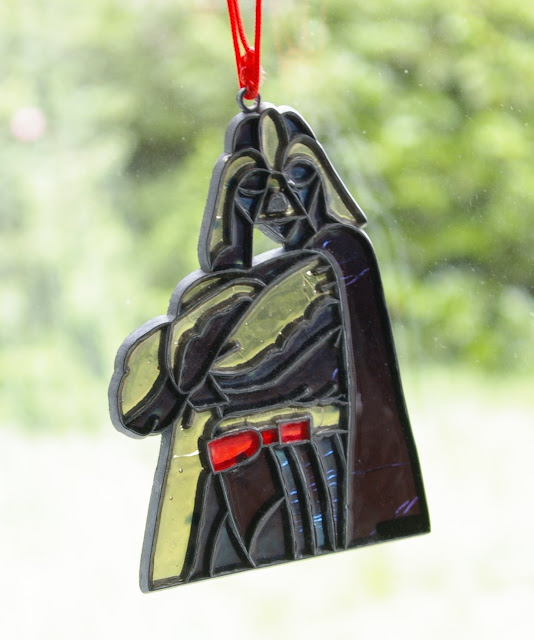 I forget what these stained glass things were called, but you bought a kit and it came with the empty metal outline and pouches of little plastic sprinkles of a few different colors which you would then follow the "paint by number" instructions to fill the metal outline with the tiny bits. Then you bake it in the oven for a hour or whatever and the little pieces melt into glass-like substance. I think I did a few of these as a kid, though this Darth Vader seems to be the only one I still have these ~30 years later. You can see a piece near his chin went missing somewhere along the line. On a related note, I wish I still had some of my old Shrinky Dinks, but I don't appear to. 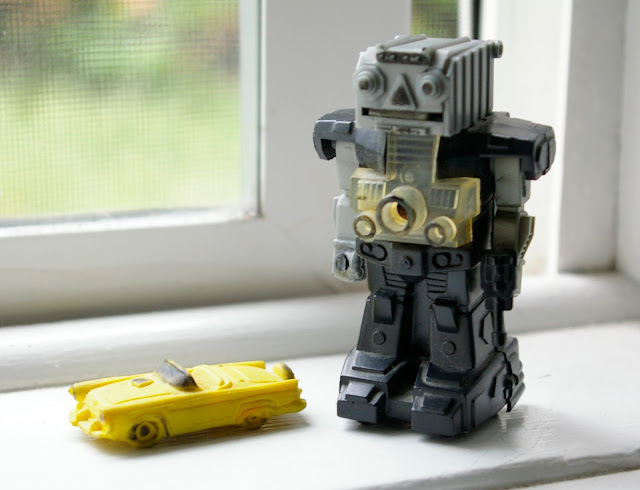 Here's some cool school supplies. That yellow car is an eraser (that I'm sure did a crappy job of actually erasing, but hey, it looks cool). I seem to have colored in some details. As for the robot, it's a pencil sharpener in the head. You can rev it up and it'll roll a little ways with wheels on the bottom. When you do this, it also used to shoot out sparks from the center, though it doesn't seem to do that anymore unfortunately. 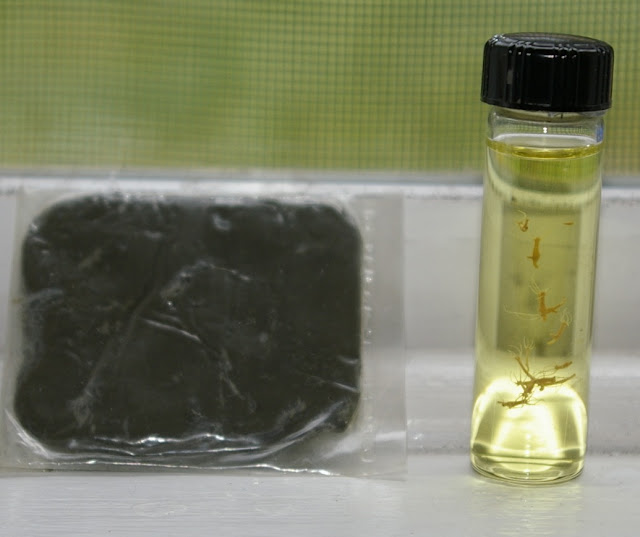 Oh man, this stuff has a story behind it. I'm not sure if it's all that interesting to anyone, but I'm going to type up what I can remember, for myself/posterity if nothing else. [Feel free to skip over this wall of text.] In 7th grade, I was really not happy at school. I didn't like my teachers and, well I don't remember all the details, but the school year got off to a rough start and I really wanted a change of scenery and fresh start. I was able to talk my mom into enrolling me in private school just a couple weeks into the school year. She found one that was reasonably priced and not too far away. We didn't realize until later that it was a Scientologist-run school! Allow me to stress emphatically that neither my mom nor I were ever into Scientology in the slightest.. never have been, never will be. I stuck it out for the school year but once the start of 8th grade rolled around, I was back at my regular public middle school. But yeah, that one year in private school was a weird one, believe me. I wouldn't say I regret it, as it was an interesting experience and in some roundabout way helped get my head back in the game with school. The best part about Ability Plus (get it, the school was called "A+") was no homework! Talk about every kid's dream, right? I think my class there never had more than a dozen students in it at any given time. There was a cool, friendly guy (Donnie-- helped me discover Jane's Addition), a cute girl (forget her name.. Stephanie, maybe? Dani? Had a bit of a crush on her for a while, but it was more out of necessity since she was the only girl around my age there), and a douchebag I carpooled with (Byron Cook-- the dick stole my Def Leppard Hysteria cassette after I leant it to him in an optimistic gesture of friendship that didn't really work). Oh, and a really funny mid-eastern guy named Tarak. There was also a freak (Jamie) who was afraid of water, and as you can imagine, he smelled terrible. Sad thing is he was probably my best friend there. I was also buddies with one of the little girls in the younger kids class. That sounds weird to say, but she was an awesome kid. I want to say her name was Melissa, but that's a shot in the dark. There was also a bearded, burly guy who was kinda cool, though I can't recall his name.. Dan or Ben, maybe? Maybe a few other classmates I'm forgetting, but I think it really was just the 7 or 8 of us in the older kids class. Our teacher's name was Abril, well-meaning but a little scatter-brained. I think she was from Brazil or someplace like that. I know Byron ended up back in regular school, as he was a year or two ahead of me at Granite Hills High School a couple years later, though I never saw any of those other guys again. They wrote me letters (as an assignment) like a month or two after I left, just saying stuff like, "Hope you're doing well in school now." I wonder if I still have those letters packed away somewhere? Probably not, but maybe. After hearing horror stories about Scientology, part of me is a little offended they didn't try to convert me or fight me when I left. LOL, was I not good enough for them?! As far as weird stuff I had to do in class, honestly, it wasn't too bad. A lot of it was just typical workbook stuff.. math, english, etc. The weirdest part was probably the weekly staring matches (I forget what they were really called) where you teamed up with another person and just had to silently maintain eye contact for like 10 minutes or something like that. Talk about awkward. Not sure what L. Ron thought that was accomplishing. The other things I remember are when you're reading and come to a word that trips you up, it's called --crap, what is it called?-- like an "unknown word" or something. Anyways, those are bad and if you come to one, you have to stop reading and look up the word and make sure you fully understand it before you resume what you were reading. Also, when you hurt yourself you should get back the energy from what hurt you.. or something like that. Basically it means if you accidentally hit your elbow against a wall, you should gently touch your elbow to the place on the wall where you got hit. Gotta admit, I still sometimes do this for the heck of it. I'm sure it's psychosomatic, but sometimes it actually does seem to help ease the pain. But that's really the only thing I took away from that year in that private school.

Oh, that and this sciencey stuff. Back to the item at hand. So when I first started going to that private school, it was located at an inactive high school. This was pretty cool as there was a lot of room to explore around at recess. I remember crawling around within the collapsed bleachers in the auditorium. There was like a secret passageway that led you to an abandoned science classroom. There were a few random things left behind, and I grabbed some green clay stuff and this cool specimen vial.

Can anybody tell me what these little guys are?

Anyways, yeah, just a weird little memento from my one year in a "cult" private school. After a couple months in the abandoned high school, A+ had to move and ended up in like an office park type of building. It was much smaller and wasn't nearly as fun. But yeah, as I say, I finished out the school year and then went back to regular school for 8th grade and on.

Thanks for taking this trip down memory lane with me!
Posted by defgav at 2:49 PM