I've finally rented through Seinfeld on DVD and am watching the end now as I start drafting this up. I originally watched the show back in the day when it was on, and then scattered repeats in syndication over the years, but haven't hit it in order since the original run. My wife isn't a big fan, so it's been an activity for the evenings she's out at grad school.

This doesn't have much to do with a pack war, but maybe we'll pull a Keith Hernandez or Roger McDowell or something loosely related. Al Newman, even. Wouldn't that be great and tie this post together?! Fingers crossed!

Today we'll be pairing off junk wax against the last 2 packs of the discounted 2015 Bowman blaster I picked up a month or so ago. 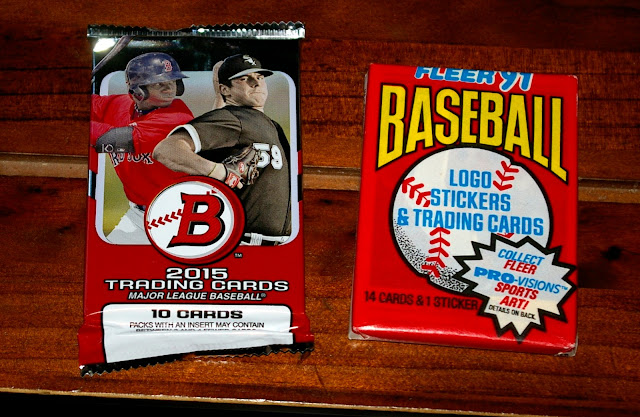 The first challenger is 1991 Fleer, packing a bright yellow punch. 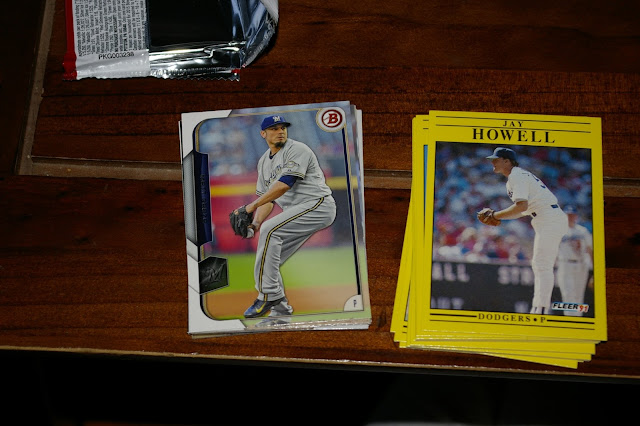 Oh right, the foil names on these Bowman cards don't show up very well. Probably not the best product for this. Oh well. That Brewer guy vs. Jay Howell. No score. 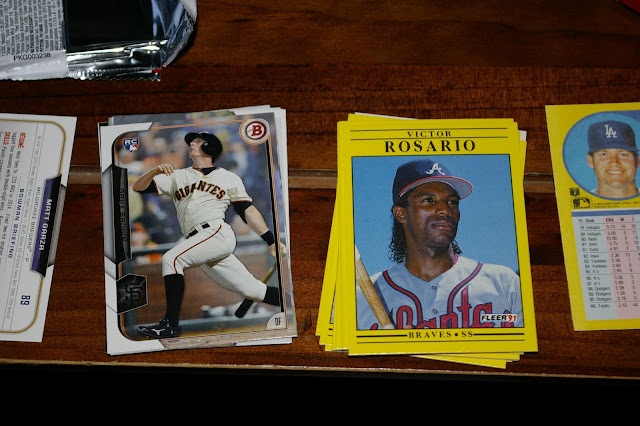 A Giant vs. Rosario. No score. Oh, and looking at the edge of the photo, we learn that previous Brewer was Matt Garza. 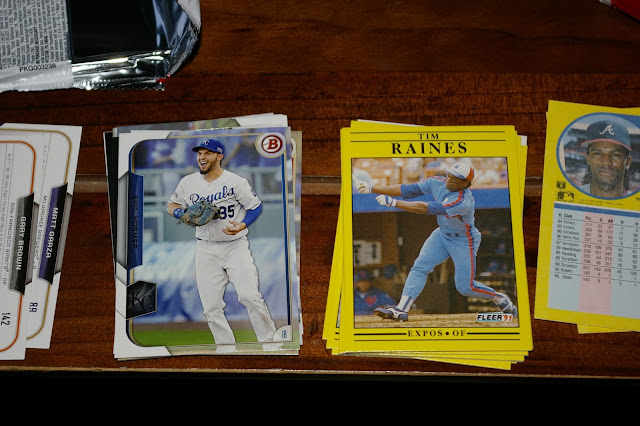 Here we go.. Eric Hosmer vs. Rock Raines. Gotta go with Raines. Hopefully HOF voters get him in on this final chance on the ballot coming up. 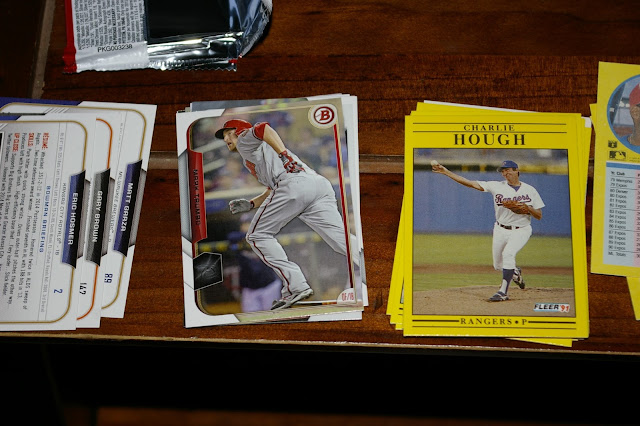 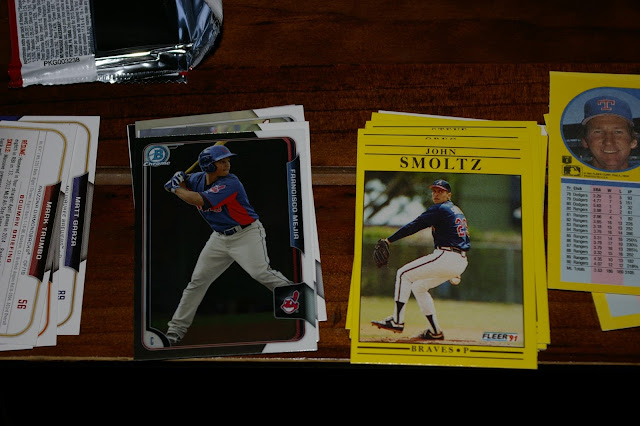 Smoltz has this one easily. 3-0 Fleer. 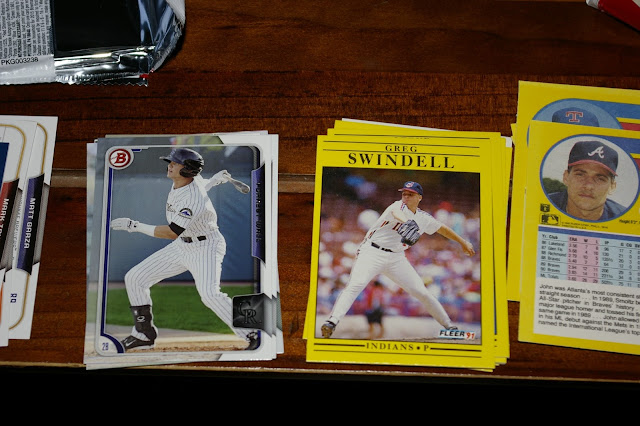 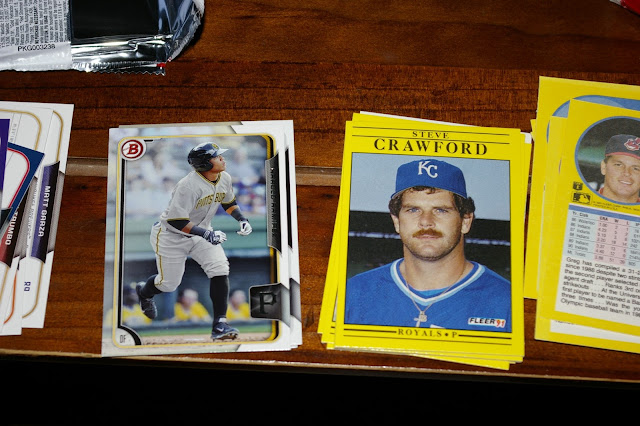 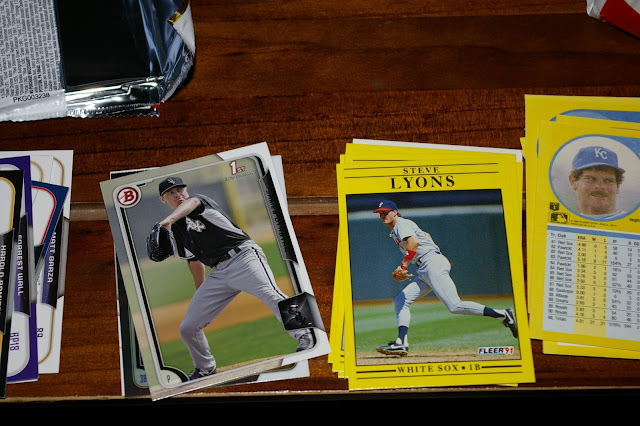 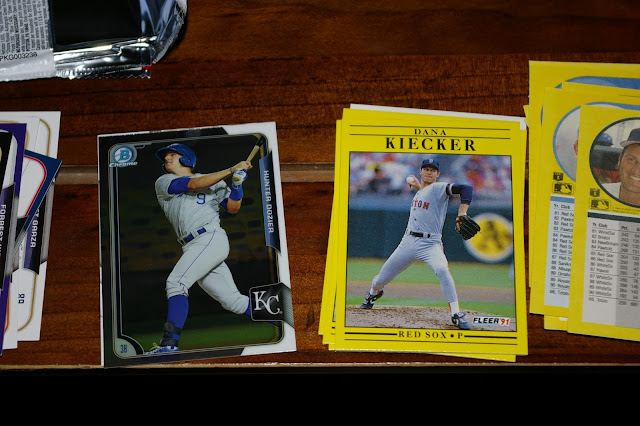 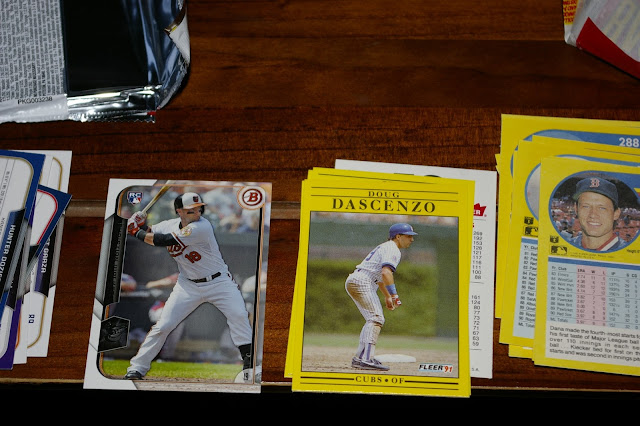 Too close to call. 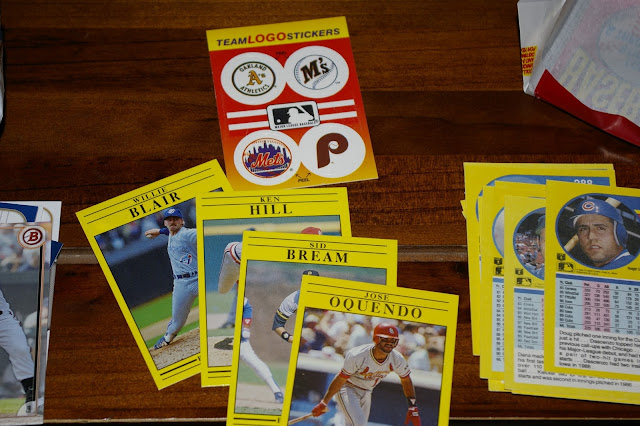 Bonus point for Fleer's surplus of cards and a sticker. 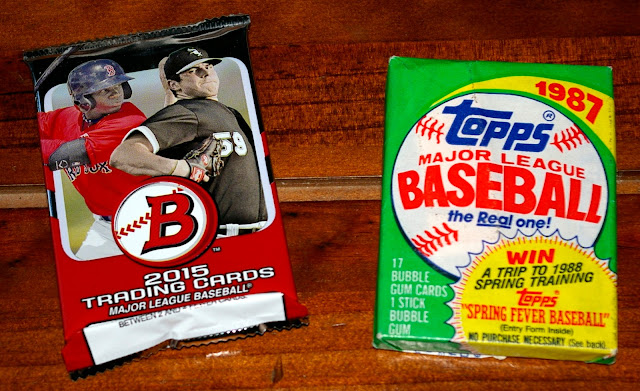 Bowman asks for another shot. 1987 Topps takes that challenge. 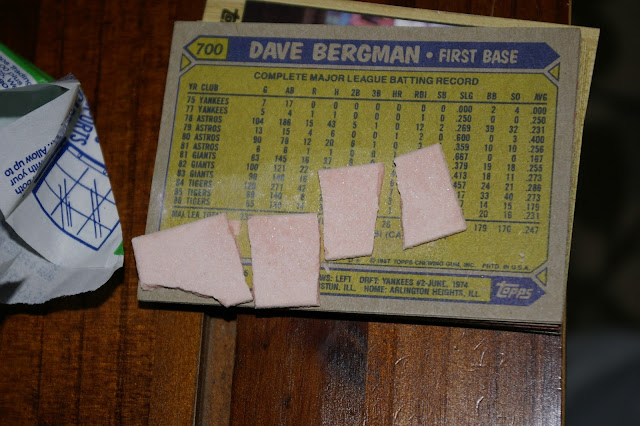 The gum was very crumbly. Gotta admit I ate a tiny piece of it for old times' sake. As the saying goes, "If it's brown, put it down. If it's pink, it's ok, I think." It was fine, though I didn't want to tempt fate eating the whole thing. 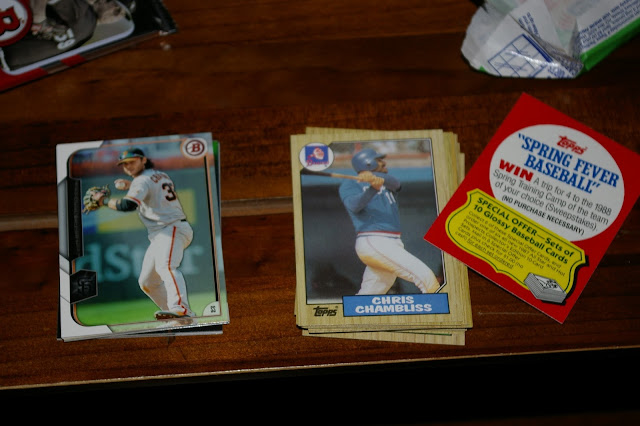 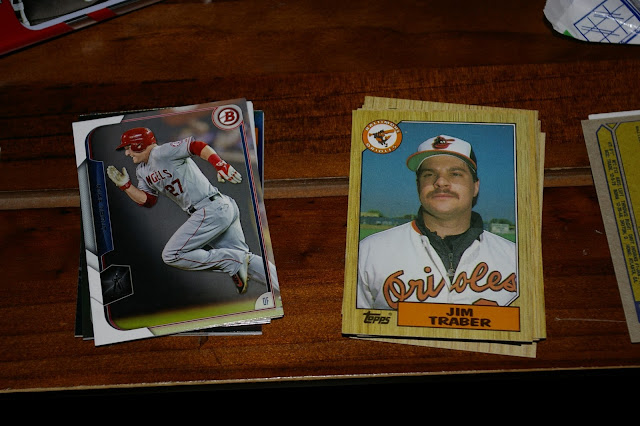 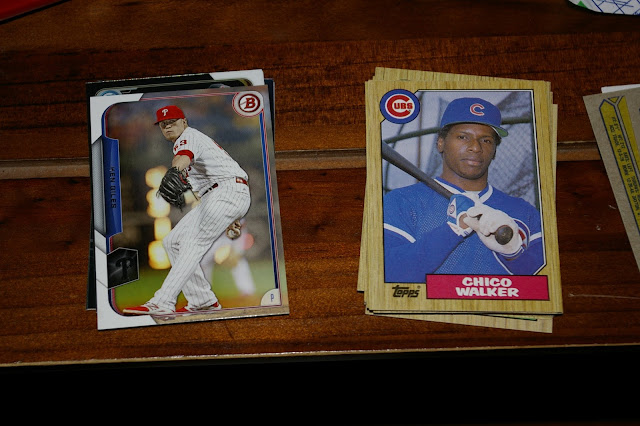 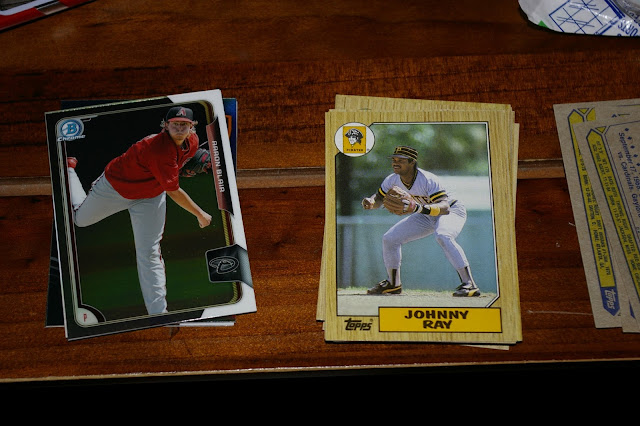 Johnny Ray always gets "We Didn't Start The Fire" stuck in my head. That's not necessarily a bad thing. Topps 2, Bowman 1.

I remember as a kid thinking how did a light-hitting second baseman make it into this song. I mean, sure, he led the league in doubles a couple times and often hit around .300, but he's hardly on the same level as Joe DiMaggio! LOL 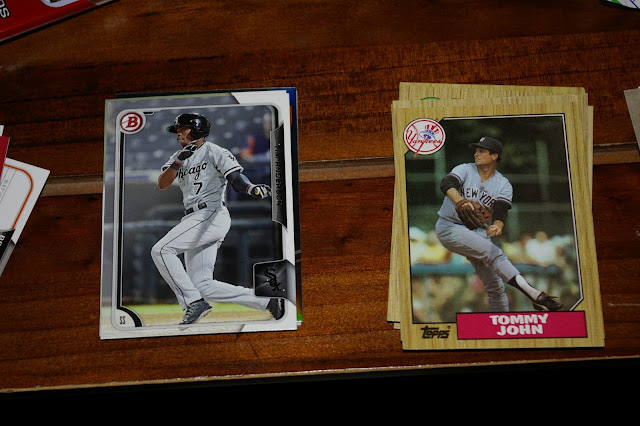 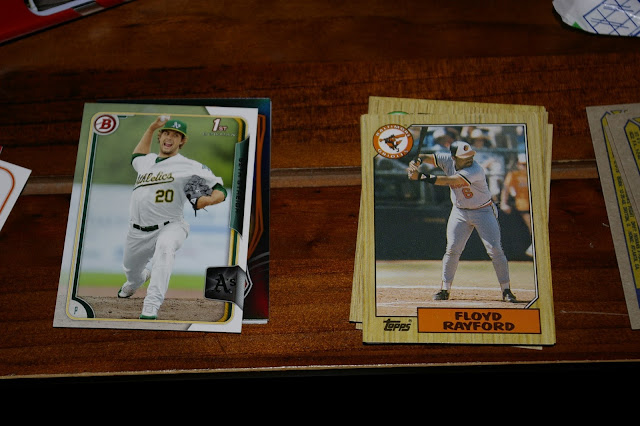 That's a great Floyd Rayford card, but gotta give it to the A's kid, in the spirit of this Seinfeld edition of Pack Skirmish. 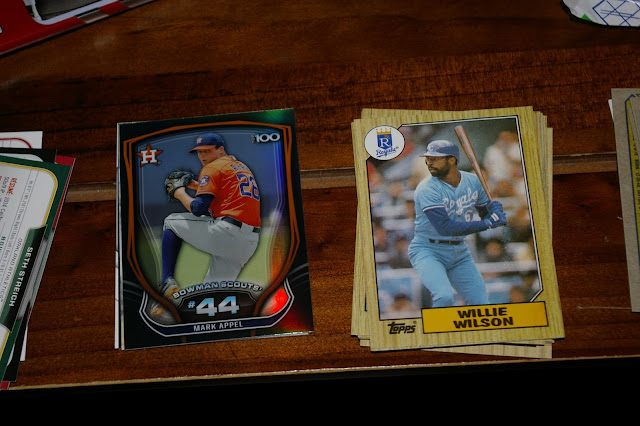 Hmm.. this is tough.. shiny insert vs. Willie Wilson. I guess Appel just barely squeaks by. Tied up at 3. 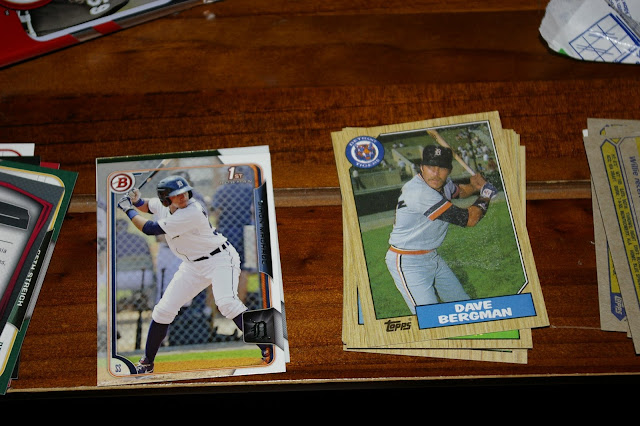 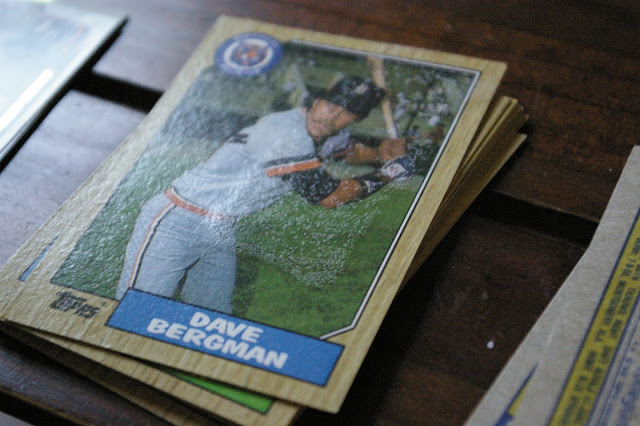 Oh man, the gum managed to damage through the card to the front. That's crazy. Immediate disqualification for The Bergman. Point to Bowman. 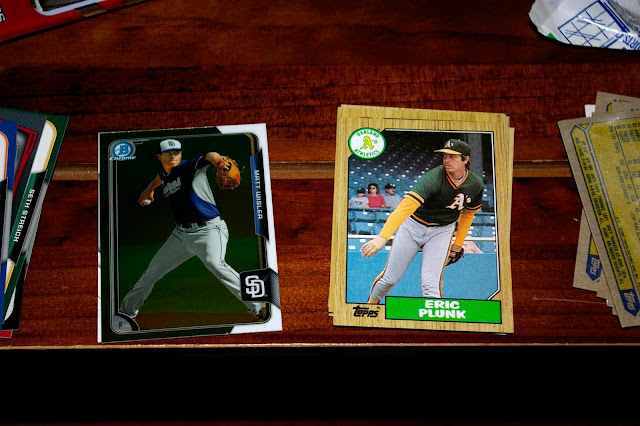 Gotta give it to the former Padre. Wisler's doing ok for the Braves these days, picking up the win yesterday. Bowman taking a good lead, 5-3. 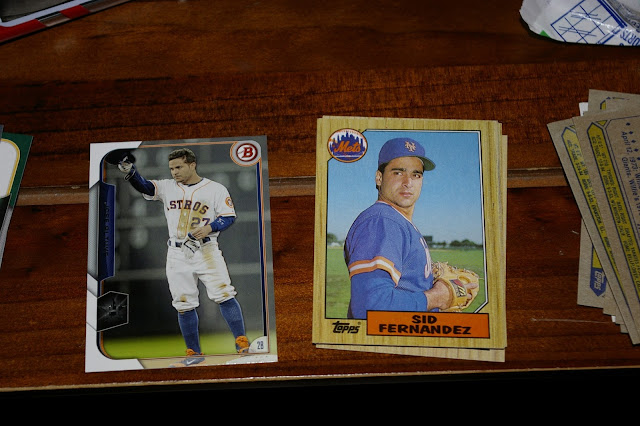 Hey, it's not Keith, but teammate Sid Fernandez is close enough. Were this not Seinfeld Edition, Altuve would certainly take this round. But it is. Topps inches back, down a point, 5-4. 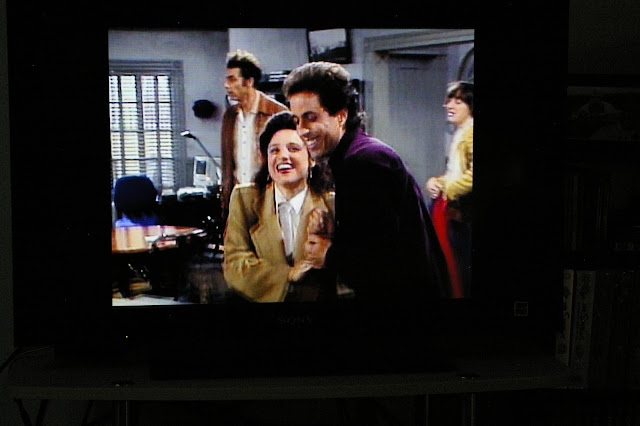 Oh, the good times they shared! 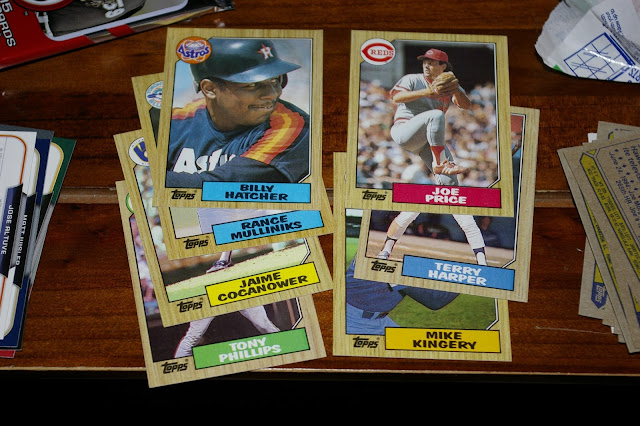 Bowman is tapped out. Topps keeps on swinging. Up off the mat to end in a 5-all tie.


Here are the highlights from the other packs in the Bowman blaster that I opened earlier:

A shimmering mini of Eric Jagielo. He went to the Reds in the Chapman deal and has been struggling in AA this season.
Those grey parallels are among the most boring ever, but hey, I won't say no to a numbered Nick Castellanos card. He's having a great year, hitting .340 so far.
And the best card of the blaster, the diecut Francisco Lindor #'d /99. Last year's AL ROY runner-up is having himself a very nice 2016 season, too. 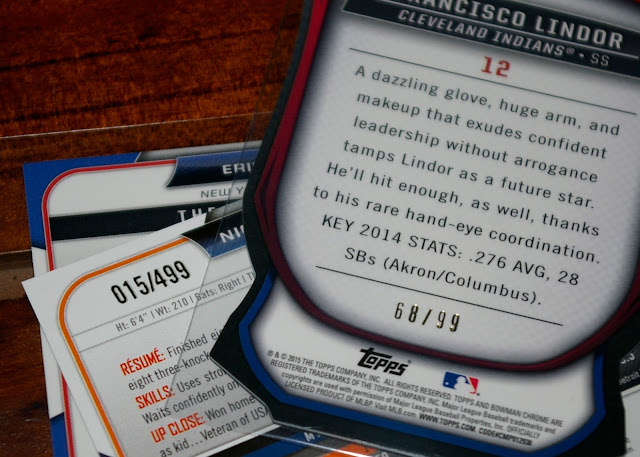 That's it. I'll admit this was a clunker of a post. Sorry. I'm just gonna dump this out midday Saturday where not many people will see it.
But thanks for making it thru! Hope you're having a nice weekend.
Posted by defgav at 10:49 AM