My best deal of the card show

It seems that I've been lucky enough at the past few shows to score a card or two from the sub-dollar bins that's worth exponentially more than what I paid for it.. which is always nice. Let's see, there's been a Trout SP, Lucroy color swap, Bryce SP. Once again upon returning home from the show, I looked up a few of the cards I wasn't all that familiar with, and once again I was pleasantly surprised to have landed a clear winner for my best deal of the show. 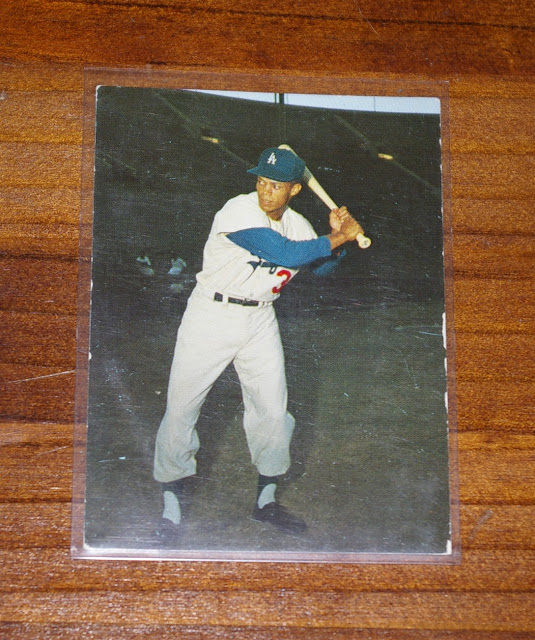 I saw this card for a quarter and my thoughts were a) Cool vintage oddball! b) I've got a few Dodger trading buddies so no harm throwing another somewhat-obscure Dodger card onto my stack even though this isn't really something I collect.
Turns out it's a 1961 Morrell Meats Maury Wills. There are 6 copies of it on eBay right now, with the cheapest being $25. My copy might be in slightly better condition, as there don't seem to be any creases. Edge chipping is common on these borderless beauties, as is toning on the back, originally packaged with hot dogs, I believe. 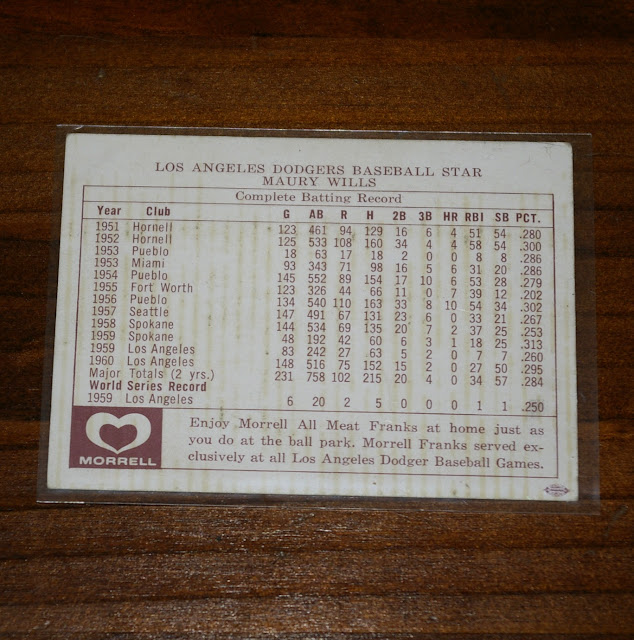 This card is from the days when Maury Wills only had oddballs, having not signed a contract with Topps. His first mainstream card was in 1963 Fleer, often referred to as his rookie card. He wouldn't have a Topps card until 1967. So not only is this an obscure meat oddball, it's also a kinda-rookie card of one of the 60s' biggest stars. This was definitely 25¢ well spent! I'll probably hang onto it for now, but if any of my Dodger buddies have a comparable card that would fit better in my collection, feel free to get in touch with a trade offer.

While I've got ya here, let's look at a few more cards I picked up at the show. 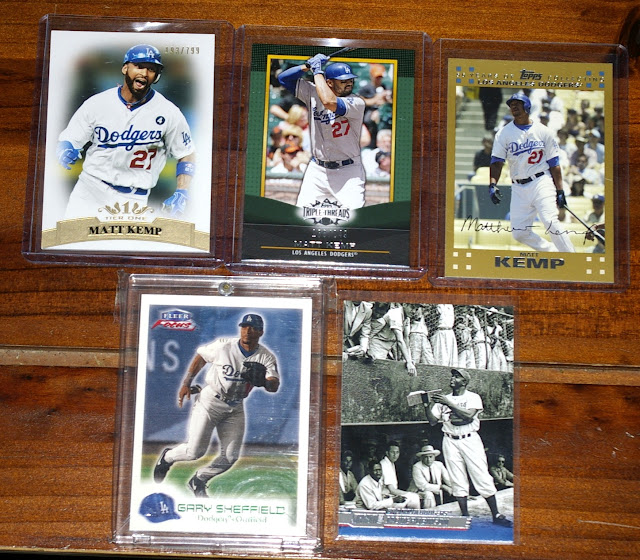 Keeping with the Dodgers theme, here's a trio of #'d Kemps, plus a Sheffield /300, and a Jackie Robinson. While I've got the utmost respect and admiration for Jackie, I've never collected him much. He seems like a frustrating guy to collect, with his vintage cards being super expensive, and his modern cards using the same few photos over and over. But this 2014 Stadium Club card just looks fantastic with the autograph-signing photo. 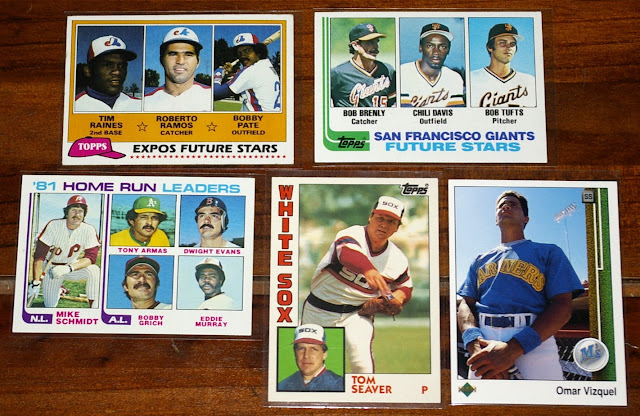 I typically stick to either older cards or more modern cards while shopping, with the overproduced cardboard wasteland of the 80s and early 90s not having a lot I need that interests me too much.. or maybe I should say I usually let incoming trade packages cover my fix from these years. But here's a group of 80s cards I made an exception for. Multi-player rookies of Tim Raines and Chili Davis are a couple cards I've always kinda wanted but had just been waiting till the day I could pick them up for 25¢ or less.. and that day finally arrived.

I ripped a lot of 1982 Topps in my early days of collecting, but don't recall ever seeing that Home Run Leaders card with the AL 4-way tie crammed in.

I think I picked up 3 different Tom Seaver cards at the show. Kind of a sleeper PC for me that'll probably hit the 100-card mark one of these days. This one is from 1984 Topps Traded.

And on the end we've got a less-iconic 1989 Upper Deck RC of a Mariners top prospect. Omar Vizquel surely won't generate as much HOF push as his former teammate, but he definitely deserves some votes, and it'd be nice to see him get in thanks to a resume that includes a whopping 11 Gold Gloves. But if Alan Trammell isn't in, I don't have high hopes for Vizquel. 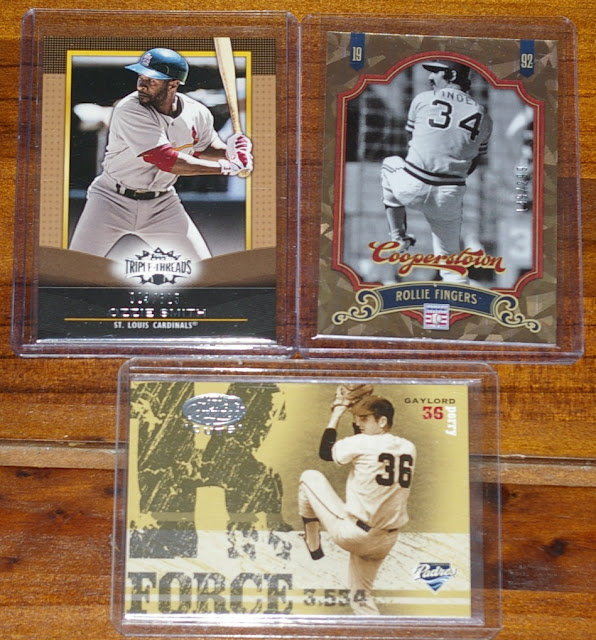 Pads in the Hall are hard for me to pass up when I come across serial numbered cards for a quarter. Funny to see the modern Padres logo on that Gaylord Perry card that clearly uses a photo from his early days with the Giants. But whatever. I think it's #'d /100 on the back. 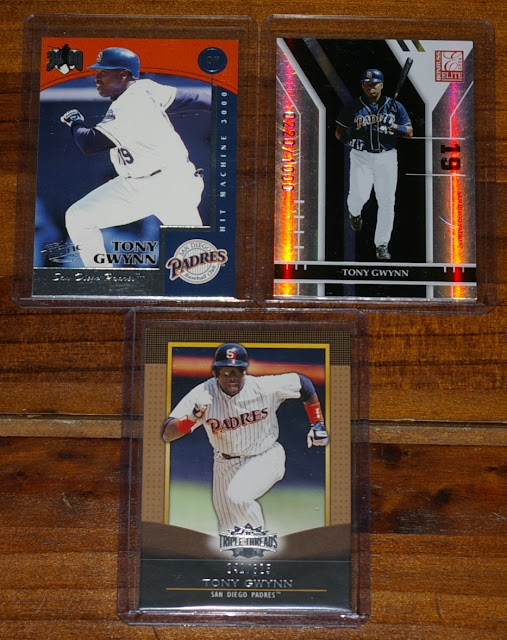 I tend to think of my Tony Gwynn collection as "finished" at this point, as there's just an infinite number of his cards out there and I'm pretty much satisfied with my well-rounded Mr. Padre PC as it stands. Sometimes I feel a little bad when thumbing past Gwynns I don't have, but I just can't let myself slip into "COLLECT ALL THE GWYNNS!" mode. But sure, I'll occasionally cave and put a Gwynn card on my stack if it catches my eye, such as these three.

That's all for this post. Still have some more keepers from this show to post about, plus a lot of trade bait, so stay tuned. And I'm overdue for a trade-roundup which I'll need to fit in this week.
Thanks for stopping by!
Posted by defgav at 4:00 PM