Post from the Coast (I was there and I wasn't aware)

Just a heads-up, this is one of those rambling "what's been going on in my life" posts, not much of a baseball/cards post, so feel free to skip it if that's not your thing.

Last Thursday, I headed out for a long weekend at the coast with my wife and her family. It's kind of a tradition for us, as her mom's birthday is also around Mother's Day.. so around early May we rent a house near the sea and have a fun weekend vacation. That was another reason I was so stoked on getting that TTM Gavin return when I did (about an hour before we left) because I was thinking it was due to arrive if it would be successful (if a TTM is promptly returned, it takes ~10 days) and rain was in the forecast so I was worried it would arrive when I was gone and sit in a damp mailbox for a couple days (and my customs tend to run when they get damp). But thankfully I was able to get it to safety in time. I didn't mention the vacation part in the post about the TTM because I've been taught to be a little paranoid about stuff like that. Like, would a reader be such a dick as to read that and think, "Oh, let's head to Portland and break into Gavin's house while he's gone and steal all his Bips!" I'm still pretty open about my life on the blog, maybe more than security experts would recommend, but at least my on-vacation posts will likely be after the fact.

Oh, and though I wasn't too worried about the mail, what made the long weekend a bit stressful was that I had just interviewed for a position at the place I'm working (temp), so I had that whole "Did I get it, or didn't I?!" internal dialog going. As shy, socially inept person, I don't really interview "well" and if I can make it through without falling on my face or freezing up, it counts as a win.

But yeah, after a decent drive (somewhere between 90 and 120 minutes), we made it successfully to the Oregon coast. The city is called Manzanita. There's a "Needz me a Man to hug n' kiss" joke in there somewhere. While the forecast for rain was a bit worrisome, it was nice enough when we got there Thursday afternoon. Friday was overcast, but not too bad. 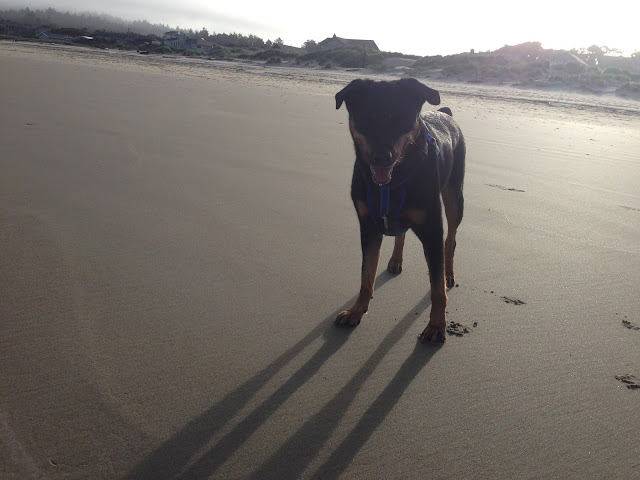 Annie frickin' loves the beach. But then again, she's a happy puppy who frickin' loves most things. But yeah, the beach would probably make her Top 10. Lots of room to run.. other dogs around.. lots of stink to smell and/or roll around in. 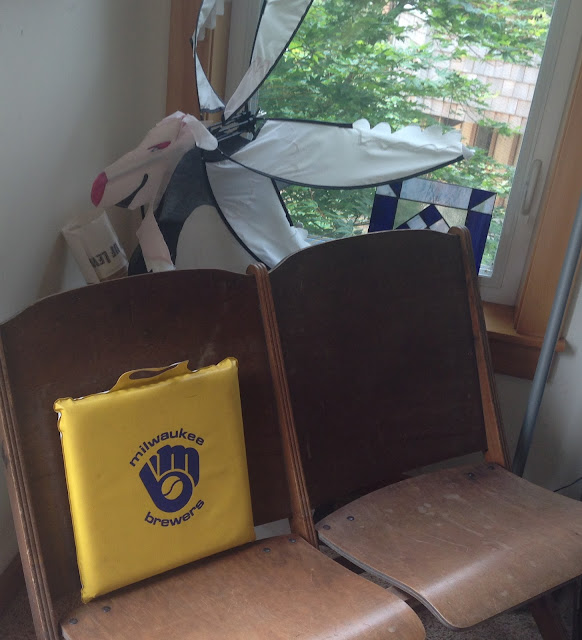 This is the 2nd straight year we've stayed at this Airbnb place. The over-riding theme of the house's many trinkets and artwork is flying pigs. Only one sign of baseball I found in the house was this Brewers cushion in the billiards room. This pic's for you, Tony L! And btw, I still suck at pool. My wife and I shot a couple games and we're both terrible. I crapped out a win in the first game, and she squeaked by me in the 2nd. 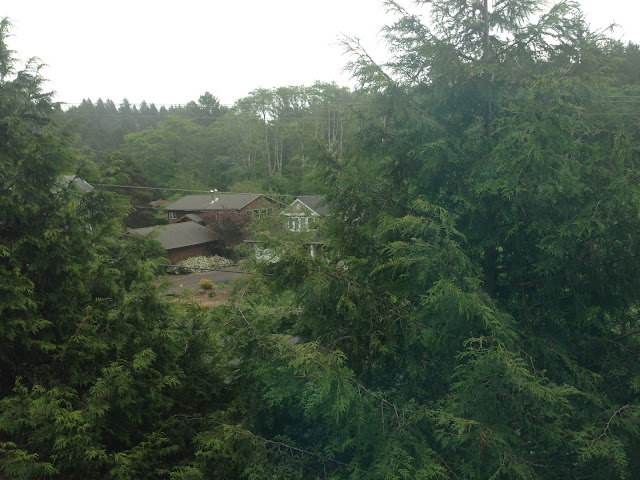 Nice view from the house. It's not quite beachfront, but just a 5-minute or so walk from the water (to the right). 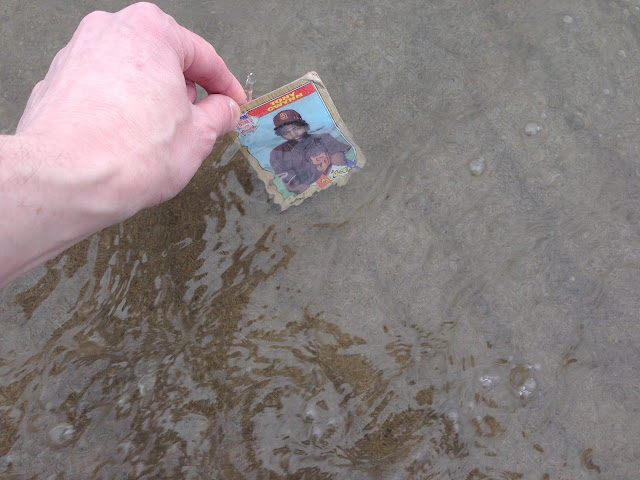 Last year I dipped my wallet card in the Great Pacific, and this year I officially made in an annual tradition, with '87 AS Tony here. I only meant to dip in a corner, but well, trying to take a photo at the same time the water rolls in can be tough, and Tony took a bath, getting pretty much completely submerged. Oh well, it's just a wallet card. If it stays in good condition, you're doing it wrong. 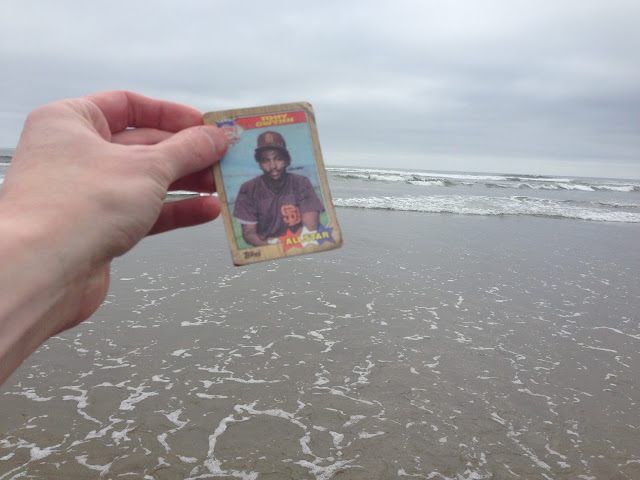 The water stretches out as far as the eye can see, as is common with the ocean.
Photos of guys holding cards are often kinda unsettling, aren't they? You're drawn to the minor sores on their fingers and whatnot. Don't zoom in too hard on my chronically bitten nails. 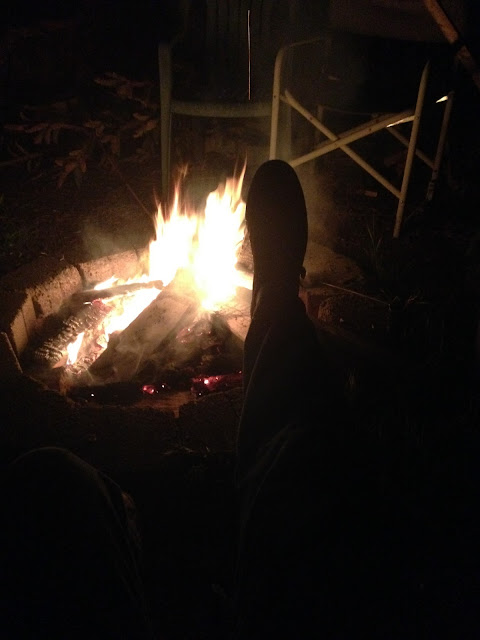 Friday night was earmarked for the firepit. That pic is my foot propping me up in my chair. It was nice while it lasted, but shortlived, as the sprinkles forced us back inside. No matter, we had a ridiculously large stockpile of wine (and drank through most of it). Also, always a highlight for me, I got to play DJ and keep the house bumping with great tunes. Lots of hits from the 70s and 80s (ELO was possibly the star of the show this trip) and a few deeper cut hidden gems. My lovingly-curated playlist (which like any good DJ, I adjusted several times on the fly based on the pulse of the room) got rave reviews. :) 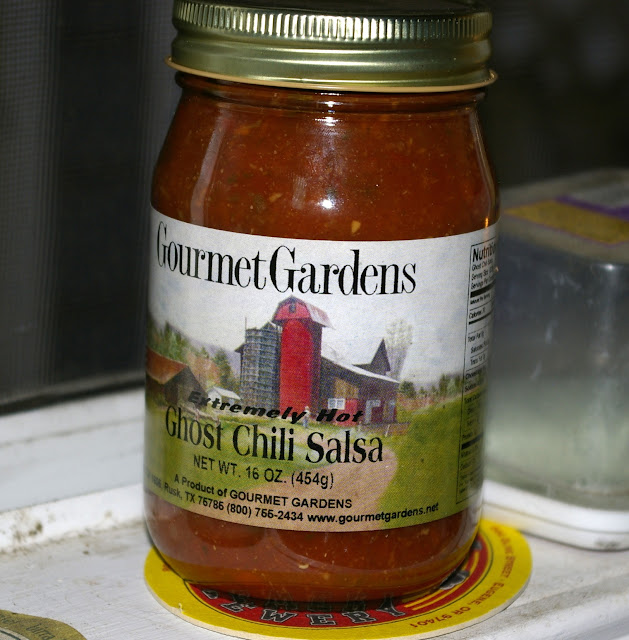 Saturday was pretty rainy, but for something to do, we headed out on a trip to the Tillamook Cheese Factory, about a halfhour away. It's a pretty popular cheese maker. The factory is kinda neat, nearly an amusement park feel to it, with tons of people there to enjoy free samples and lots of crap for sale. I snagged a bag of saltwater taffy and a jar of ghost chili salsa. I'm a bit of a spicy food junkie, so "extremely hot" sauces and the like definitely get my interest. As for my review of this salsa, while it's got some decent heat, it didn't give me nearly the eye-watering, nose-running, vision-quest-inducing result I was hoping for. It's fine, but would not buy again. I remember a few years ago I had a ghost chili beer that knocked me on my ass and nearly exploded my head.. now that was something. Speaking of beer... 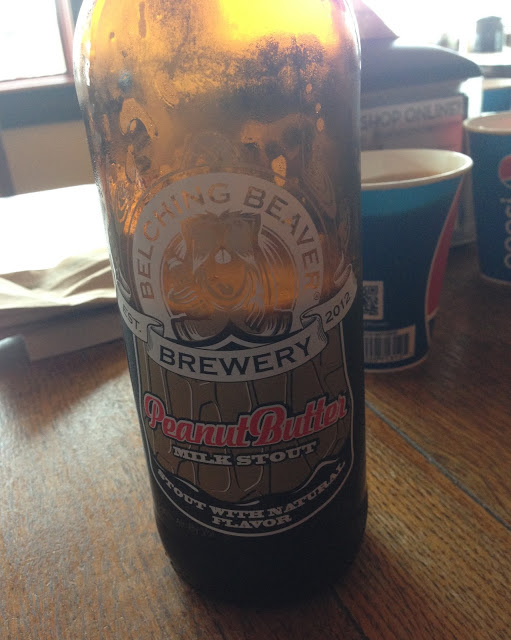 Tillamook Cheese Factory serves restaurant type food to eat, but it's busy and noisy there, so we opted to get lunch down the road at Blue Heron, which is kinda like Tillamook Cheese Factory on a much smaller scale. I had a nice deli sandwich with this seven-dollar beer I split with my wife. Milk stouts are favorites for us, usually very smooth and tasty, if low in ABV. While this Belching Beaver Brewery stout boasts its Peanut Butter flavor, it didn't taste much of PB, and was actually more chocolatey, or even reminiscent of Rouge Hazelnut Brown Nectar. But that's not a bad thing, and this was a very enjoyable beer. (End of beer review portion of this post.) 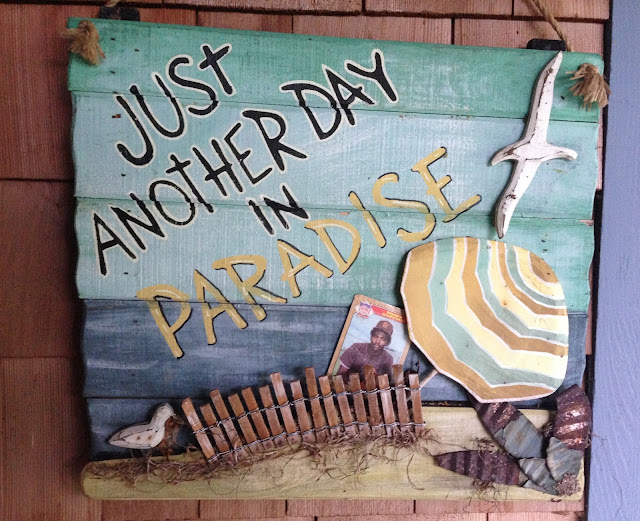 The weather Sunday was a bit better than Saturday, but still not great. Still, though, Wallet Tony enjoyed the carefree weekend out of town.

As the clock struck noon, we headed back in the rented minivan to Portland. When we arrived back home that afternoon, that whole Odor vs. Bautista brawl was all over Twitter. (The parenthetical title of this post isn't really about that, though, and is more of a reference to a couple recent lyrical Night Owl post titles, but I guess it applies.) After a while to decompress, Judson tweeted a pic at me asking for a custom of the big moment. Believe it or not, the thought hadn't really crossed my mind, but of course I should make a custom of it.

I cranked one out in just a few minutes thanks to having a '90 Fleer Superstar Special template already made for the Wade Boggs Always Sunny custom I whipped up a while back. It came out really good. Perhaps a bit too good. More on this in a sec.

Anyways, back to work on Monday, around midday I learned that I got hired on. I got the job! Seriously, guys, I've been a temp for as long as I can remember. To actually get hired on for real is a big deal for me. This is my first ever salaried job. And it's that cool tech place downtown. About 25 minute train ("Max") ride in. Relaxed dress code (hats and shorts are fine). Beer keg in the lunch room. Plus my wife works there (and is responsible for me getting my foot in the door), so I get to eat lunch with the woman I love. Definitely a good place for me to be. As far as what it means for the blog, chances are I won't be posting everyday for a while, at least until I get the hang of things, but the outlook is good that I'll continue to have enough free time to keep up blogging on the regular. And it's not amazing pay, but pretty decent by my standards, (and plenty of opportunity for promotion), so I should continue to have the adequate disposable income to spend on valuable paper rectangles depicting men who play baseball. I might even splurge on a fancy card as a celebratory gift to myself soon.

Anyways, back to the Odor/Bautista custom.. It got a lot of attention on Twitter, and in the process attracted the attention of the director of photography for the newspaper whose photographer snapped the great shot. He shot me a scary email and in turn I took down the post and the tweets with the card. This scary email arrived like an hour after I got the news that I got the job, so I went from being super happy to being scared shitless. It was an emotional rollarcoaster of an afternoon, that's for sure.

It all worked out, though. But please don't talk to me about the custom in question. Don't mention it in the comments or anything! Let us never speak of it again. In fact, I might even do the unthinkable and disable comments on this particular post. Apologies for the censorship!

After the encounter with Topps last month and now this, I think I'm really going to be keeping my customs on the downlow and cooling out on them in general. I get that America is very much into copyrights and intellectual property n' shit, but man. It's scary and not worth it. I'll still make an occasional card for myself or a trader buddy, but hopefully nothing that brings too much attention to myself. While the likes and positive feedback are nice, it's not worth litigious scares.

And the stress continued this week as my wife interviewed for a position at our work she really wanted. She's become bored and burnt out in her current role, and this promotion would be great for her, not to mention a big step up and pay raise. Did she get the job? I don't know; I'll have to save this draft here for now and pick it up again later.

Well, looks like those sadistic a-holes are gonna keep her wondering, as it's Friday afternoon now and no word. Way to stress out our weekend, jerks. Plus the hiring manager is going to be out of town next week, so my wife will likely have to wait until the following week to find out if she got the job. That's just cruel!

I want to go ahead and get this post out now rather than sit on it indefinitely, so I'll have to leave you guys on a cliffhanger there.