Pack Skirmish: 2015 Stadium Club vs. the Junkiest of Junk

It's time for another filler post, er, I mean Pack Skirmish! This time, my last coupe packs from the discounted 2015 Stadium Club blaster will be matching up against the junkiest of the junk wax that Topps has to offer. 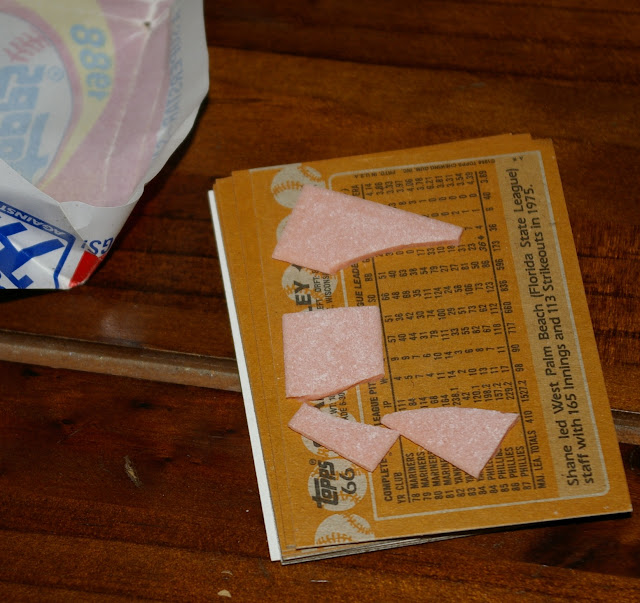 The first challenger is 1988 Topps.
GUM CHECK: It's good! Let's give it a point for pure, pink gum. Cracked, but otherwise still in fine condition. I ate the whole thing, ain't gonna lie. No ill effects. Took me back to my carefree days as a kid. 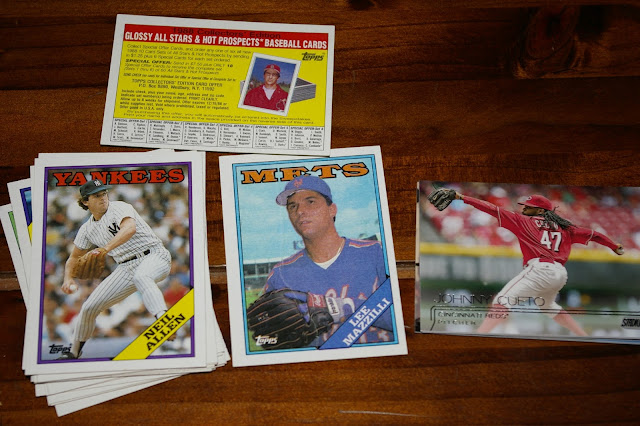 Since Stadium Club only has 5 cards to a pack, they'll have to fight off multiple junk foes. Cueto here feels no pressure, and fends off Neil Allen, Lee Mazzilli (creased inside the pack), and a micro appearance of Jack Clark.
Tied at 1. 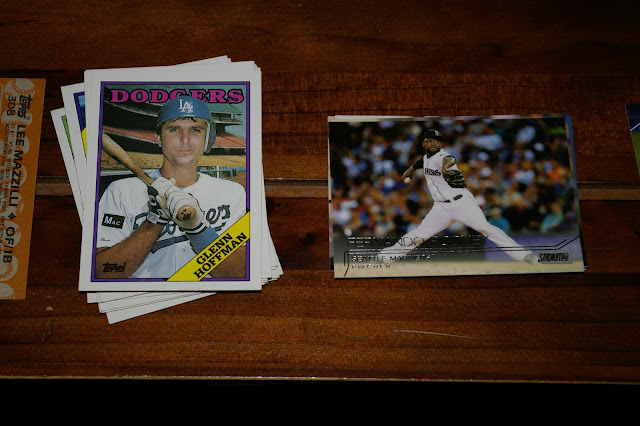 Oh, it's a mano-y-mano matchup of future Padres. Current third base coach Glenn Hoffman vs. current closer Fernando Rodney. Man, I can choose between this pair of Friars. Pass! 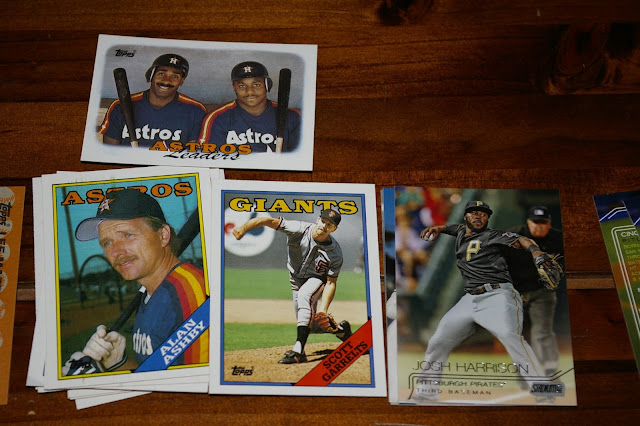 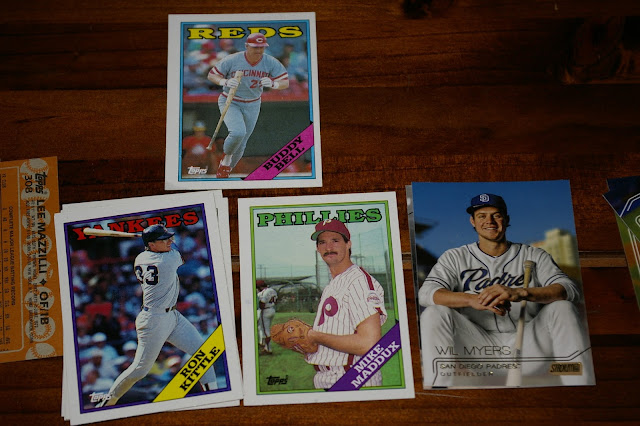 Wil Myers gold parallel.. nice card of a guy I collect, but I already have this one (thanks again, SCC), so it'll probably end up with Marcus. Since it's a dupe, I'll reluctantly give the point to the trio of decent names. Well, Maddux might be a decent name due to Mike's brother, but close enough. 2-all tie. 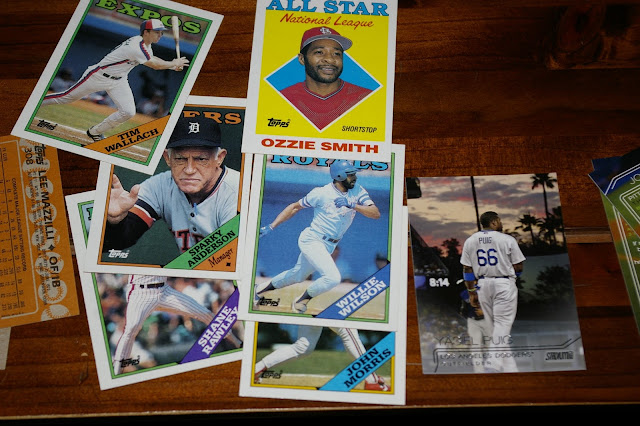 It's a BATTLE ROYALE as we close out the last cards of each pack. Pads in the Hall Sparky Anderson and Ozzie Smith, not to mention cardsphere gold Tim Wallach.. but damn, that's a fine looking Puig card with the So Cal sunset in the background. I had been hoping to land that card for my collection for a while now.

It definitely came right down to the wire, but Stadium Club wins by the skin of its teeth. Exciting! 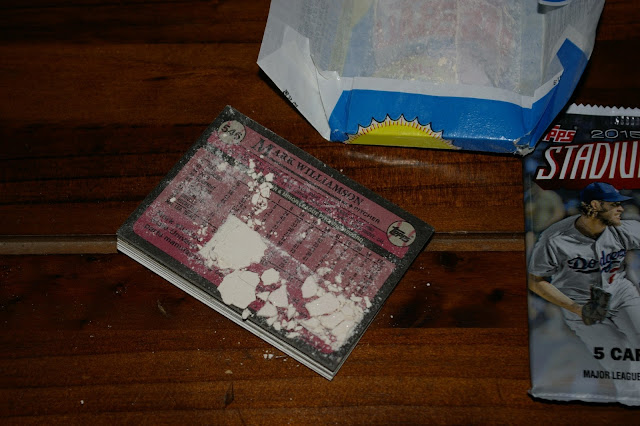 Nasty! GUM CHECK: It's no good! Gum dust! Not edible. '89 Topps loses a point right out of the gate. It's 0 to -1. I threw away that Mark Williamson card too. It's gonna be an uphill climb for the flagship. 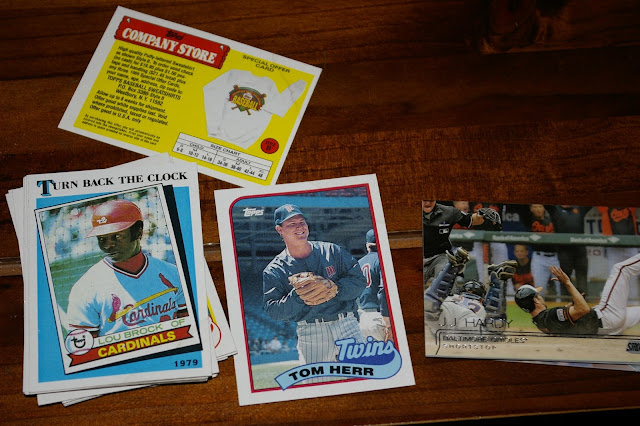 All-Time Cardinal favorites Lou Brock and Tom Herr team up to knock down JJ Hardy and redeem the disappointing gum. We're back to no score. 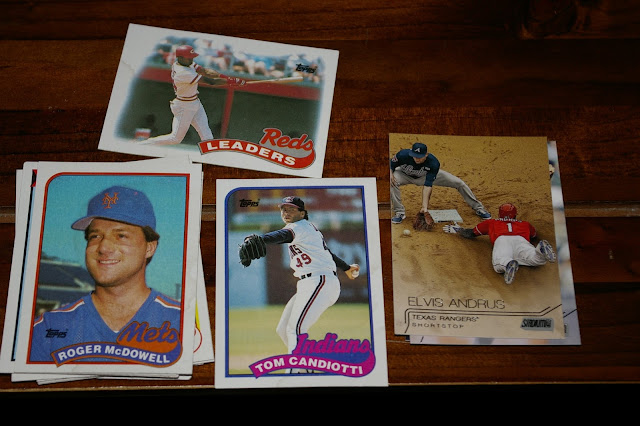 Ah man, where was Roger McDowell during the previous Pack Skirmish post when a Seinfeld theme was unsuccessfully forced?! The Candy Man and Eric The Red (slight water stain on the left?) are also hard hitters, but that shot of Elvis stealing second is just too awesome. Stadium Club up 1-0. 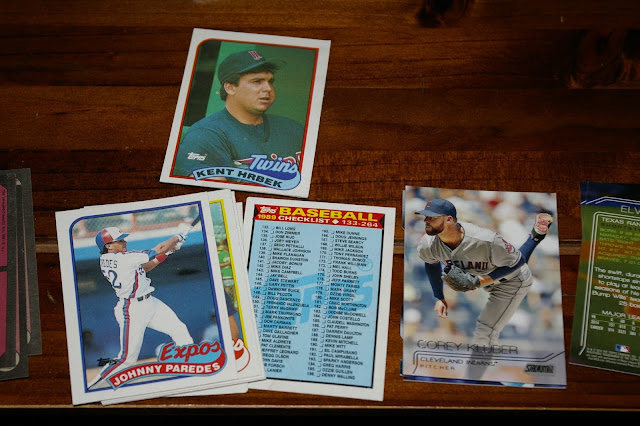 Meh, Hrbek is always fun to pull I guess. Let's give the point to Topps. 1-1 tie. 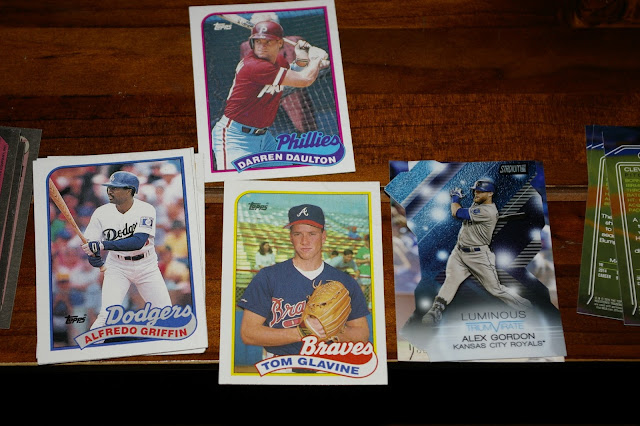 Oh wow, a Luminous diecut of a dude I collect.. nice! That's good enough to beat a HOFer and a couple other solid players. SC 2, Topps 1. 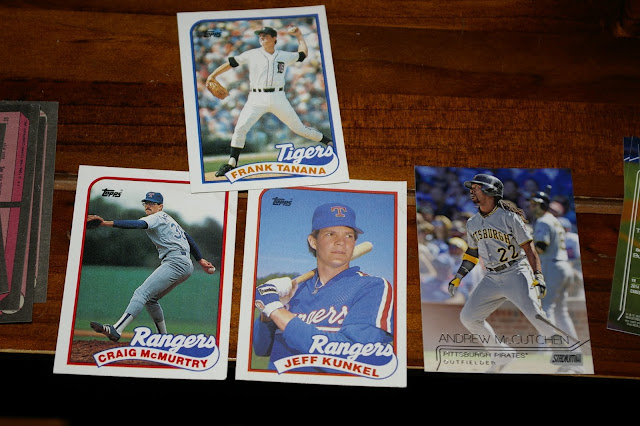 And this is it! Topps wheels out Frank Tanana and a couple Rangers scrubs. No match for Mr. Andrew McCutchen!

Stadium Club handily wins this one. Topps could never recover from the gum debacle. Congrats, SC.

And for the highlights from the other packs in my Stadium Club blaster? Well, there weren't any, really. Just a couple dudes I passively collect, Darvish and Pujols. Overall it wasn't a very exciting box. The Alex Gordon insert was the best card, with the Puig and McCutchen also being keepers for me. But hey, the price was right, and lots of collectors are working on this set, so it's always good for trade fodder.

It would be impossible to find packs of MLB baseball cards that interest me less than 1988 and 1989 Topps, but hey, even so, I still love ripping packs, so this was fun. Plus I pulled a few "pack fresh" PC guys who might be upgrades for me. And it's always nice to run into a Wallach for the Wallach Guy. BTW, I was privately racing him to 1000 copies of any particular card. Sadly for me, he won recently by reaching 4-digits with Wallach's 1982 card, meanwhile I'm still at 350-ish cards of 1990 Upper Deck Marquis Grissom like a chump. I keep hoping for a huge lot to hit eBay and help me take a big stride, but no dice.

Thanks for tuning in. See you next time!
Posted by defgav at 3:48 PM