A couple neat additions to the ol' Guys From Granite minicollection I wanted to show off. (And I know these posts aren't all that exciting to most of you, so I'm enticing you with revealing another prize bonus for my latest contest at the end.) 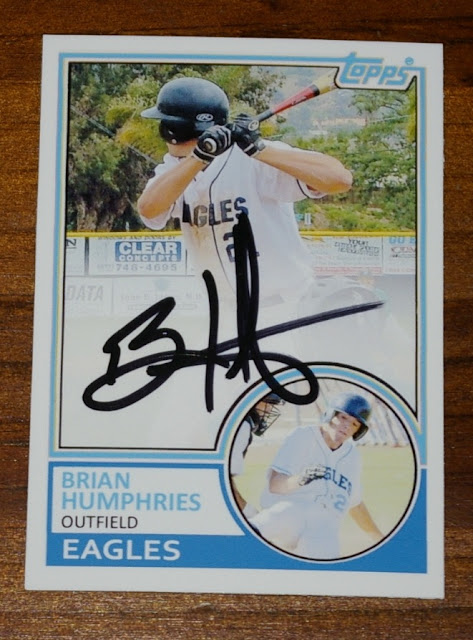 A year ago, Brian Humphries sent back what was my first-ever successful TTM, signing a Bowman refractor for me. I figured I'd try again this year, and this time, I utilized my card-making skills to whip up a card featuring his time as a Granite Hills Eagle. I think it came out pretty good (Sorry for borrowing the 1983 design, Topps; I swear I'm not selling any of these!) I sent 3 copies to Brian. In my letter I thanked him for signing for me last year, explained we went to the same high school hence the homemade H.S. card, and offered the extra two copies for him to keep. He was kind enough to sign two copies for me and keep the third for himself. Thanks again to Mr. Humphries! Wishing him continued success with the RedHawks this season.

While I'm at it, I should mention a guy recently offered me a bunch of money for my Brian Humphries superfractor. The guy is trying to collect all the superfractors he can from that year of Bowman, and had his sights set on mine. I paid a pretty penny for it a year or two ago, and this guy offered me double.. perhaps even more if I squeezed him on it. But man, that superfractor is a jewel of this minicollection for me, so I had to decline.

Anyways, I would love to add more Granite customs to my Guys From Granite PCs, and in fact also have one currently out to John Omahen, though he got promoted to AAA right around the time I sent it to him via his AA team, so that might create an issue/delay getting it back.

Oh, and I should also mention that pro ball recently welcomed a couple new dudes who went to my high school: 2016 draftees Andrew Brown (Phillies) and Trenton Brooks (Indians). Hopefully they pop up with cards in prospect/draft-type products soon so I can add them to my collection. I wanted to get around to making customs for them and try sending to their rookie league teams to get autographed, though I haven't had the time.

Now lets switch gears from the newest Guys From Granite to the oldest, Mike Reinbach. I've posted about him several times, but for the uninitiated, he got a cup of coffee with the Orioles in 1974 but was unable to stick on a crowded roster despite impressive numbers on the farm. He later played in Japan with great success. Though an obscure name, he's definitely among my favorite players to collect. 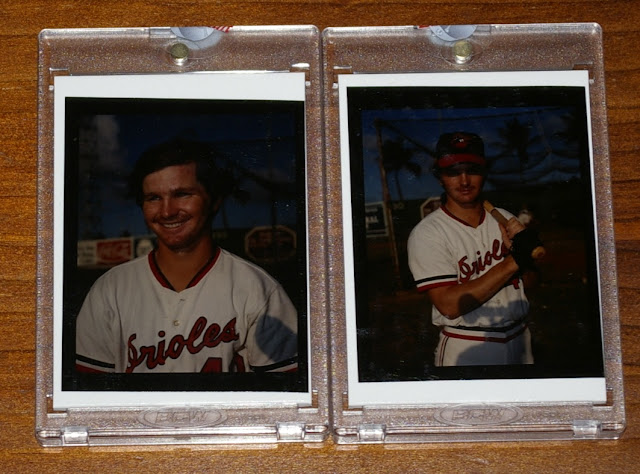 I was pretty excited when this pair of slides from the Topps Vault popped up on eBay (separately, but at the same time). I already have a similar one of these...

But now I've got a nice trio of photos from that lovely spring day in Florida. 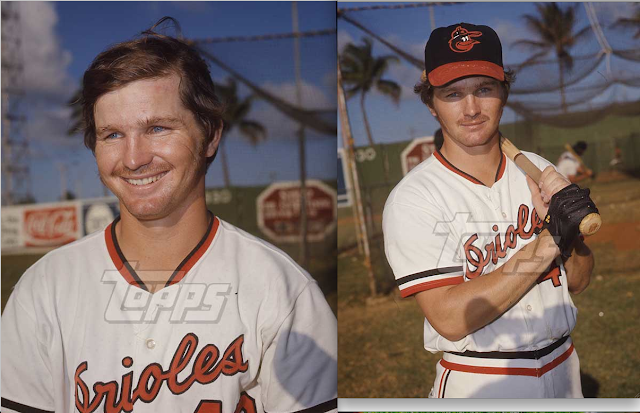 Here are what the pictures look like when properly processed (courtesy of the eBay listings). Bummer Topps never got around to putting him on a card.. at least on a 4-player rookie card in 1974 or 1975 would have been great, but no dice. But back to these items at hand... In general, I kinda hate these color negatives from Topps Vault. I've picked up a few in the past (in addition to these Reinbachs, also have a Willie Stargell [on Braves!] and a Bill Madlock), but it's always a bit anticlimactic when they arrive. They look good in the auction page, but then when you get them, they don't "display" well since they're so dark. And if you want to scan it yourself, well, Topps distributes them in a magnetic case with a special Topps sticker sealing it. So if you wanted to take it out of the case, you'd have to break the seal, therefore hurting the collector value of the thing. So basically you're stuck just grabbing the jpg from the auction page, but that's got a big Topps logo watermark on it. Sure would be nice if Topps could include a non-watermarked printout with these when you won them! Maybe they could even just email a non-watermarked jpg to the winner of these auctions. But anyways, yeah, it makes these slides frustrating to a collector such as myself.

Oh, but I shouldn't be too hard on the fellas handling the Topps Vault, because along with the two negatives I won, they also surprised me with what appears to be the original file envelope the the images were kept in all these years: 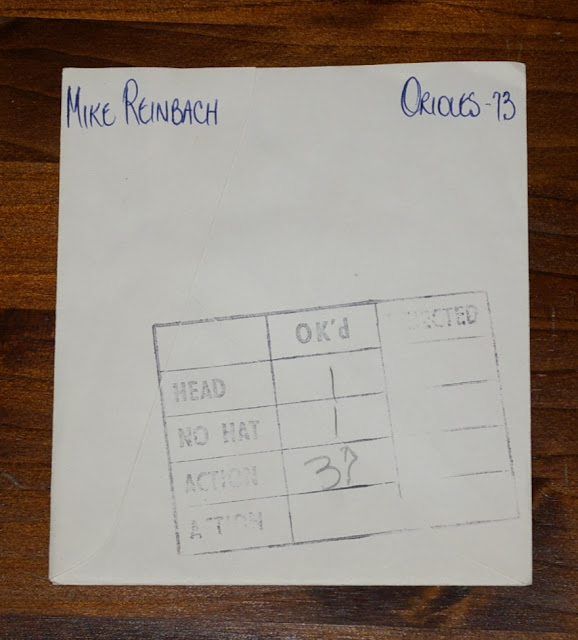 I think this is super cool! One of the best surprise bonuses from an auction I've ever gotten. It seems to be a cut-in-half envelope ("bulk mail postage paid" thing on the reverse), and it identifies the player, team, year (73), and a grid for the types of photos the photographer took. Now this gives me some questions here. Head, No Hat, Action, Action (again?). Well, the "no hat" one is obvious in the above photos, though I wouldn't count any of the three as "action".. definitely not in-game action, anyway. Yet there were 3 action shots? I'm guessing that says "3?" but it almost looks like "37". I'm just trying to figure out what else I'm missing, if anything, from this shoot. It's my guess that there was a close up (similar to the "no hat" one but with hat) which would be "head", and perhaps one more shot of Mike holding the bat (and that would assume the 2 photos of him holding the bat that I have count as "action"). So looks to me like maybe there are a couple more negatives from this spring training photoshoot in existence. Perhaps they were sold before I started keeping a watchful eye on eBay for them. Or maybe they're still in the vault, to be sold at a later time. Or maybe there were only these 3. The photographer did pencil in "3?" after all. Who knows. But still a cool item. And I'll still keep an eye out for more Mike Reinbach cards (and card-like things) to add to my collection. 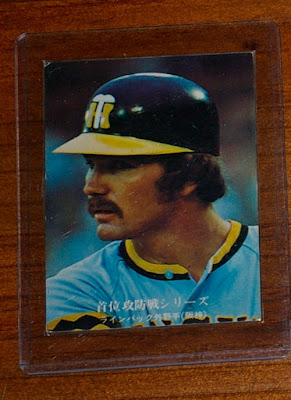 Another card from Japan. He's got a ton of Calbee cards like this, and I'm always happy to go after them when one I need pops up. It's funny that I was so desperate for even just one for so long, and now several have popped up within the past year or so. I feel like a bad supercollector with so many cards of the guy "out there" that I need, but it's obviously tricky when the cards are from another country, not easily available to English speaking folk like myself.

Last call for my big 800th Post contest! I'll likely close the entry window sometime around late Friday or early Saturday so we can shake out a winner or two this weekend hopefully. So go enter if you haven't yet! 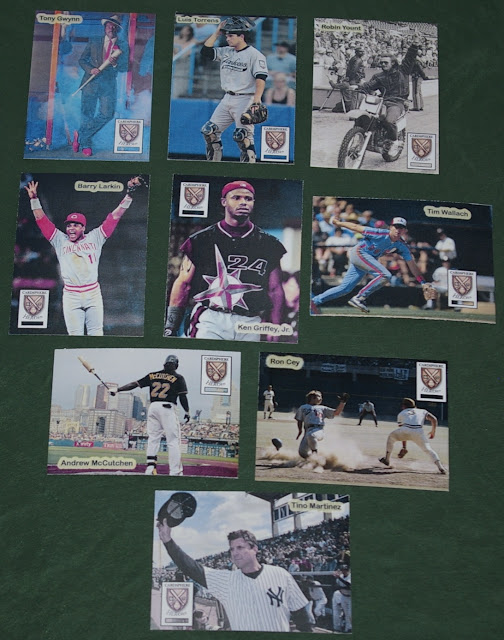 Here's another conditional bonus prize. If the winner of the contest runs an active card blog, included in the grand prize will be a complete 9-card set of 2015 Cardsphere Heroes. It was the first custom set I put together and I still have a 2 or 3 sets sitting around. This particular set potentially available is the "black ink glowstar 1/1" variant. For more info on this set, check out this post.
The small print for being eligible for this bonus prize is just that you've got to have a blog with at least one post by you in 2016 that shows at least one picture of a trading card. Even if you don't meet this requirement right now, I'll allow you to squeak in under the wire if you get it done before I name a winner. So if you've got a dormant blog, post something! If you've been thinking of starting a card blog, do it! Our little community of card-nuts is a better place when more people are active members, so I love when I can do my part to motivate people to post.

Now for a chance at a bonus entry into the contest, post a comment on this post suggesting a good name for a new card blog (by sharing it, you are giving your blessing for somebody to maybe actually use it). I'll award a bonus entry to the person who comes up with what seems to be the best suggestion or most clever or whatever.. I don't know, maybe I'll randomize if judging is too hard.. but someone will get the extra entry. Have fun with it.