My first Blowout Cards order (is a good one)

Not that I'm a stickler for store loyalty, but when I buy a box of cards online, it's pretty much always from eBay or occasionally Dave & Adam's Card World. But a week or so ago, somebody in my feed retweeted about a good deal Blowout Cards had going for the July 4th weekend and I took a look and ended up getting in on the action. 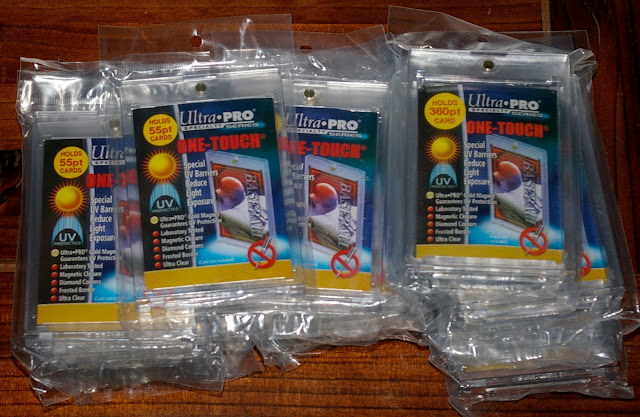 I had been wanting to pick up a few magnetic cases, particularly for some fat cards that I didn't have good storage for. So I threw a bunch of various sized magnetic cases into my cart until I had enough to make the shipping fee worth it, plus get me to the threshold for using a $5 off coupon code I found with a quick google search. 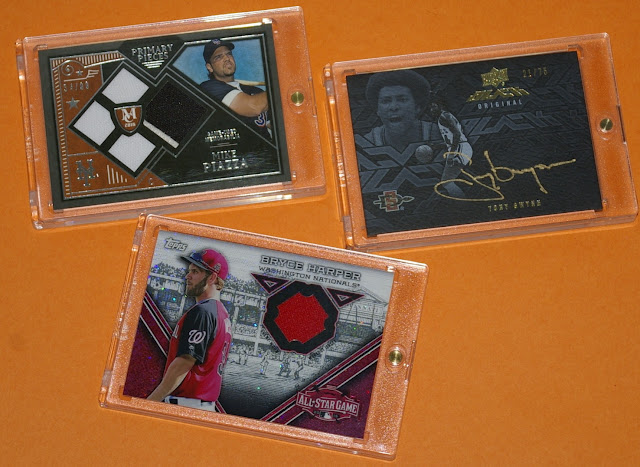 Ah, that's better.. some old cards of mine in nice new cases befitting cards of their stature. 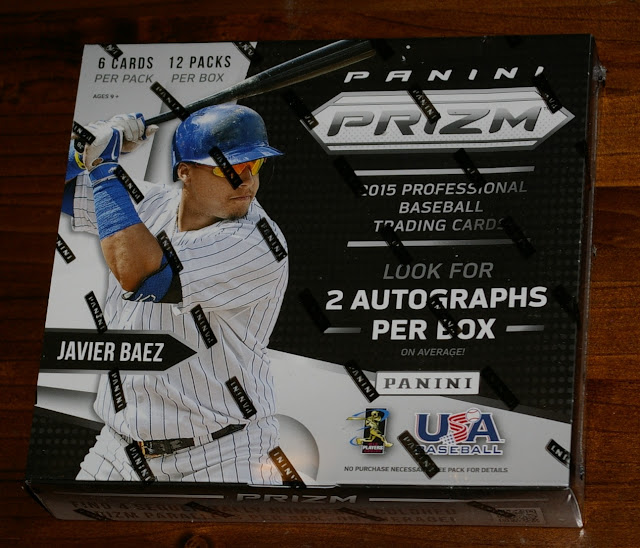 But the catalyst for the order was a price I found hard to resist on a hobby box of 2015 Panini Prizm, about half off of what you'd find elsewhere. While I'm pretty burnt out on the metallic chrome overload that this product shows up with every year, I hadn't ripped any of the 2015 version, and it was cheap for 2 promised autos, plus the usual pretty and/or numbered parallels. (That said, I kinda hope the fact that Blowout was blowing out these boxes means they haven't been selling well and hopefully Panini mercifully lets the product line die after this year.)

But as for this box... would my recent hot hand busting boxes continue? Let's check it out..

Well, it was a Barry Bonds hot box, with a base card, a refractor, and a tie-dye parallel. Serial numbered 10/50, that crazy hippy-looking card is now the scarcest item in my modest Bonds PC. 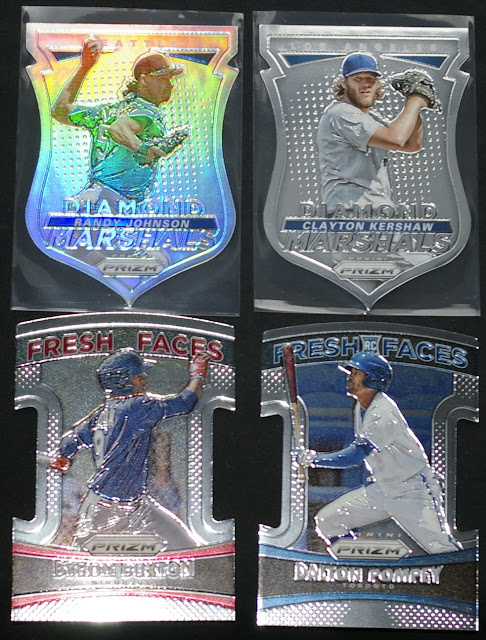 From tie-dye to die-cut, Panini delivers with oddly shaped cards. Looks like established players get a badge shape, while up-and-coming kids get a pillar thing. 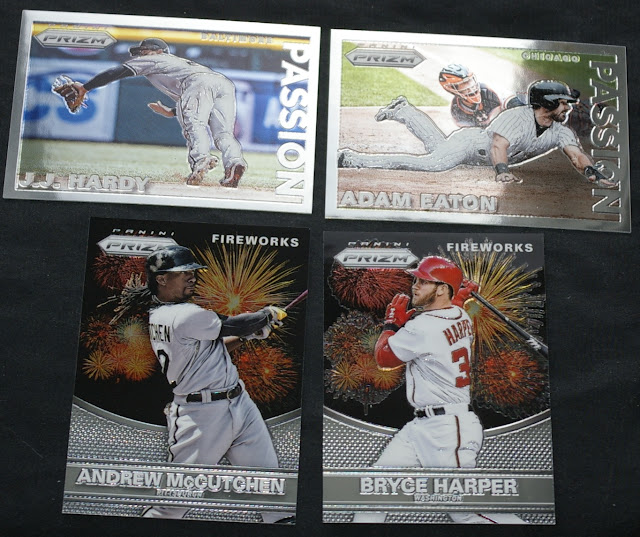 More inserts. Looks like Passion is the insert set where Panini snuck in some interesting photos (as all the rest of the cards in the product are boring shots you'd expect). The Fireworks cards are a bit of a head-scratcher, but hey, a couple guys I collect, so I'm happy with them. 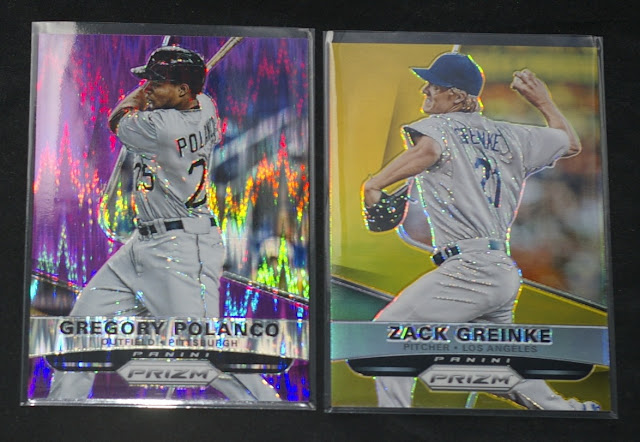 Shiny parallels. Love the trippy effect on the Polanco. It's #'d /99 and will likely walk the plank to Bob Walk one of these days. The Greinke is #'d /10, which would be a pretty nice pull, but I don't collect him, and pretty much nobody else does either. He's among the best pitchers of recent memory, but he hops teams too much and seems like kind of a jerk, so his cards don't have many collectors out there. 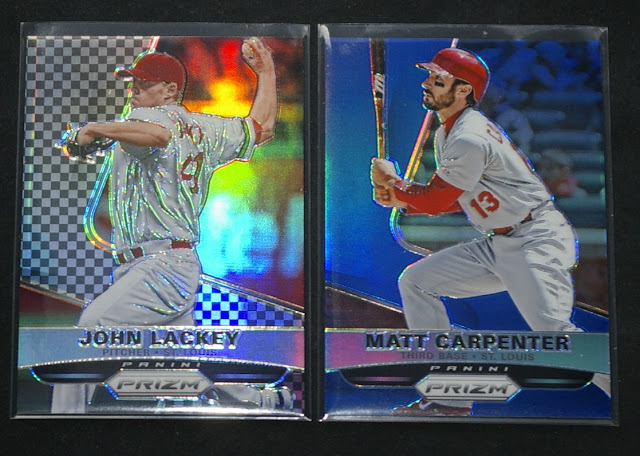 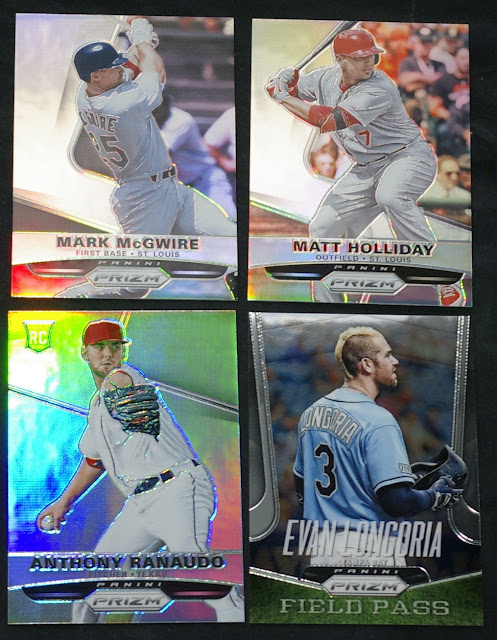 More refractors and another insert. 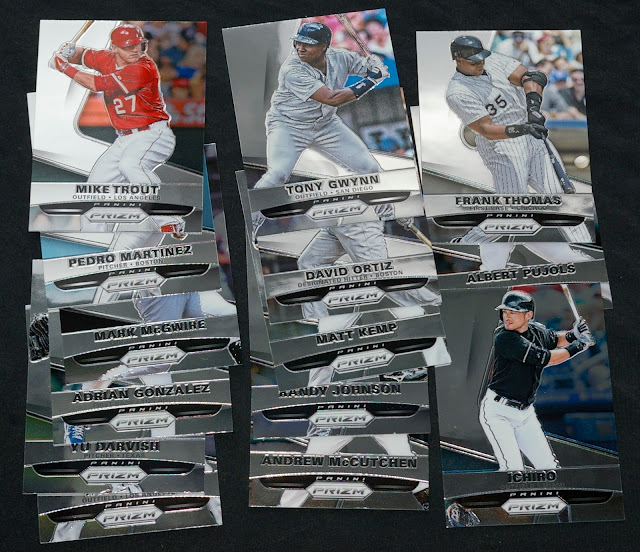 Some base cards of dudes I collect. While I'm still not crazy about the base cards in this product, I'll give them credit that they seem to get a little better looking every year. (ie, the first set was the worst.) 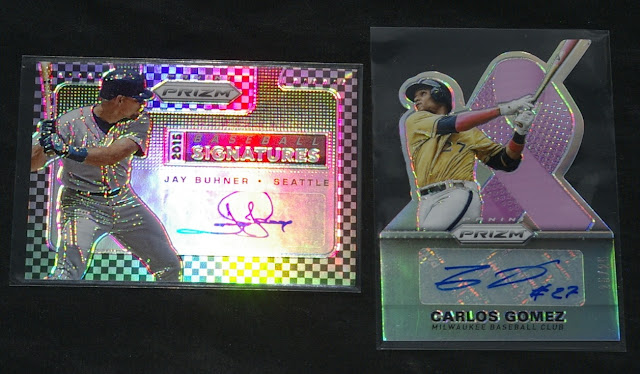 The autos. Jay Buhner #'d /99 and Carlos Gomez /25. Not bad! Buhner had a very nice career. Gomez had a couple impressive years for the Brewers. I don't collect either of these guys and chances are they won't stick in my collection longterm, but at least I have trader buddies who could give them good homes.

So yeah, decent box. Non-PC guys available for trade, so let me know if anything caught your eye.
That's it for this time. Thanks for reading!
Posted by defgav at 6:24 PM