Skinny-dipping in the Topps Vault

Man, Topps may have sent me a cease & desist a while back, but there's no hard feelings between me and the only game in town as far as officially licensed baseball cards in this day and age.

I recently snagged 4 discounted items from the Vault on eBay in a combined shipping order. Let's check them out: 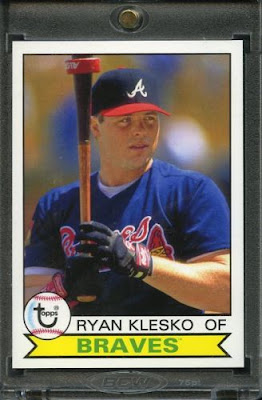 Klesko may be a That 70s Show caliber name these days (no, wait, that's Kelso), but I have fond memories of Ryan being in the heart of the lineup for those Padres teams from a decade or so ago. I figured my Ryno PC could use a "1 of 1" to give it a little legitimacy in the eyes of the cardboard elite, and this 2016 Archives blank back fits the bill (even if it is a bit of a ploy as it was never packed-out but rather created specifically to be eBayed). I consider this to be a "finishing touch" to that PC which I'll probably post about one of these days. 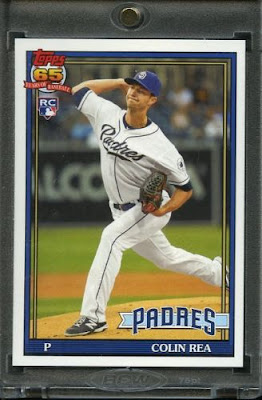 And here's another one. Colin Rea is a guy the Padres are really counting on blooming if they're going to contend have a shot at being over .500 in the next few years. I too am banking on him flourishing as a top of the rotation guy, and this is the 2nd 1/1 blank back I've picked up of the guy, though I don't think I've shown off the 1st one yet. One of these days.
(UPDATE: And now he's traded to the Marlins. *sad trombone*) 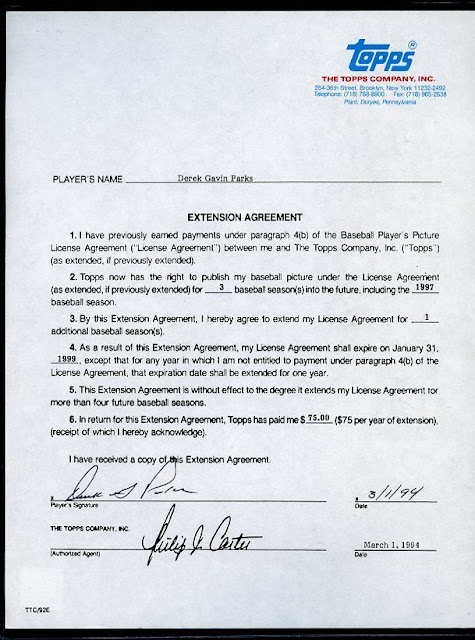 Ok, now here's a quirky item for my Greatest Gavins minicollection. A back-up catcher for the Twins, 92-94, Derek GAVIN Parks doesn't seem to have any official certified auto cards out there, but I was able to add a certified auto in the form of this Topps contract! He didn't sign his full middle name, but did include the G at least! I'll take it! It's the first legal document in my little collection of Gavin and Gavin-related cards and card-related items. March 1st is my longtime friend Chris' birthday, so I'll give it some bonus points for the date. By the way, if you're interested in a similar Topps contract signed [or stamped or autopened] by Mr. Sy Berger, I've still got a few I'm looking to unload, trade or sale. I bought some up a while back thinking I'd flip them for a profit but it didn't turn out that way for me, unfortunately. This one up here isn't a Sy, but rather Philip Carter, who also seems to be pretty prolific at signing ballplayers to card contracts/extensions. [...] A quick google reveals Mr. Carter is currently "Director of Sports/Licensing at The Topps Company, Inc" (via LinkedIn).. Cool. Good to know he's been able to stick around among all the changes and employee turnover Topps has seen since then. I doubt there are many others still there who've been with the company since at least the early 90s. 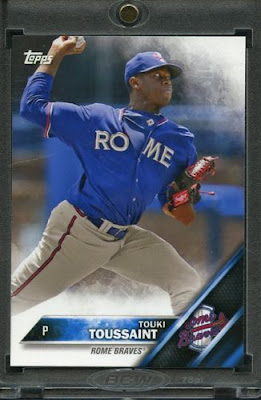 We close with another "blank back 1/1", this of Braves prospect Touki Toussaint. He's not doing great this year in A ball (3-7 4.32), but still has a shot at being a solid major league pitcher in 2 or 3 years. I think of this as an investment to probably eventually send one of my Barve-collecting buddies when I find myself in the need to hit them back with a quality card sometime in the future.


[now some rambling which you can skip past]
Matt, your 800th Post prize package has officially been dropped in the mail. Mr. Hoyle also has a package enroute. Shane, your runner-up prize package is packed up and ready to go but didn't make it out today. See, I went to the post office today after work but the damned automated machine is still on the fritz. Anticipating this, I brought a bunch of stamps, which is how I was able to get Matt and Mark's stuff out. But unfortunately I didn't have a good combination of stamps to fit on your small (but powerful!) package. But I think I'll be able to mail it out tomorrow. I have to go to the post office for work (I basically just burn and ship dvds as my job; I work at a big data archiving company.. it's not bad), so I'll try to mail it then. ON THE CLOCK! Lol, no, I'm salaried now (hallelujah!!) so whatev's. I use Stamps.com for my work packages, but not for my own stuff. (Shipped out a bunch of international packages recently.. damn, that shit's expensive these days!) But yeah, as for me.. Gotta stand in line for that. And no automated machine at the downtown post office. But again, I'm working, so I don't really care if it takes me a few extra minutes. Hey, I don't always take a full hour for my lunch, so it's cool. I try to workout in the building's gym a couple times a week when I can, but haven't had time this week. I gotta get my monthly DVDs out by the end of the month, so this week is a bit stressful for me, but I think I'm gonna make it. I'm rambling a bit now. I'll usually ride on the stationary bike for 22 minutes while I watch an episode of The Simpsons or The Onion Sportsdome (RIP.. this was a fricking hilarious sports show! Sad it only lasted one season. Sports and comedy are hard to pair just right for the masses, I guess), and then do some weight/machine work for a few minutes, usually arms and abs (my legs and glutes are good as is, not to brag, lol). Really would like to get my beer belly under control. I'm not "fat" but after a meal it looks like I'm smuggling a basketball in my shirt. My least favorite part about the gym is the occasional guys who linger in the locker room. It's like, dude, do you get off on catching glimpses of flaccid wieners? Don't just hang out in a locker room. Not cool. Oh, and one time the combination on my lock jammed after I had taken a shower.. I'm standing there for like 10 minutes in nothing but a towel desperately trying to unlock my locker and get to my shit. It was an ordeal, let me tell you, but finally I finagled the combo just right and it opened, thank the Lord. I also am a member of a local gym now, thanks to my wife who uses it more than me but Work reimburses us so why not add me to it too. They have a pool, which I'm excited about, although I'm more or a "splashing in the water" guy, not a "swimming laps" guy. We tried to go last weekend, and I had suited up and taken my pre-swim courtesy-shower and everything, but then we found out it had closed early that day for a swim meet. That sucked. It was my first time at the new gym (it's actually and old gym, kinda like a YMCA, but my first time there.) At least I spent a couple minutes punching a heavybag to get a tiny workout in and take out some frustration with the situation. Maybe we'll try again this coming weekend. Swimming is pretty great. Ok, I'm done rambling.