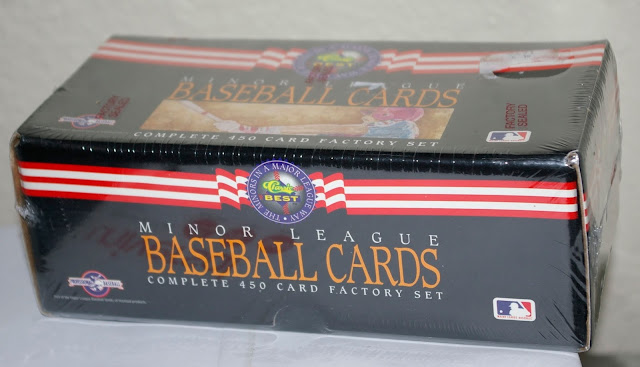 I won a sealed factory set of 1992 Classic Best Minor League Baseball Cards from Julie way back in January. I exercised some patience, but finally ripped into it last night, deciding to raid it for my PCs and dump the remainder in the spirit of tightening up my collection a bit.

These are the big 3 of the set, no doubt. Jeter, Piazza, and Chipper. 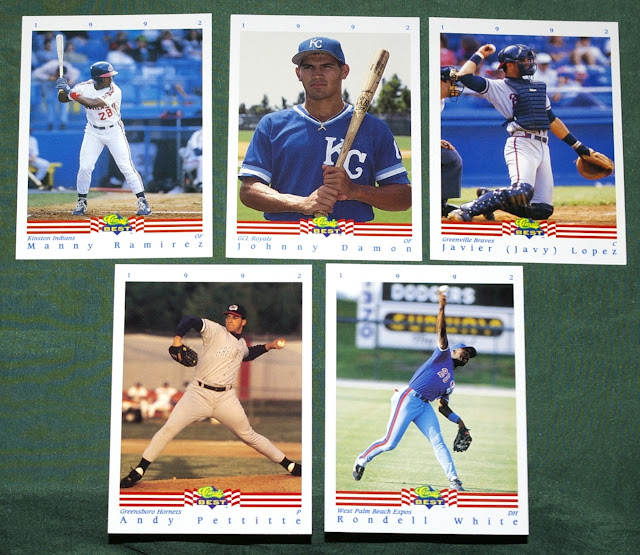 A few of the other guys who went on to solid careers. 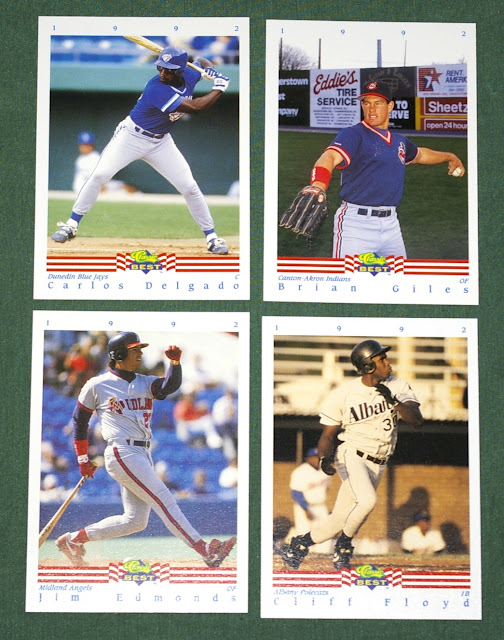 These 4 were all PC needs for me. 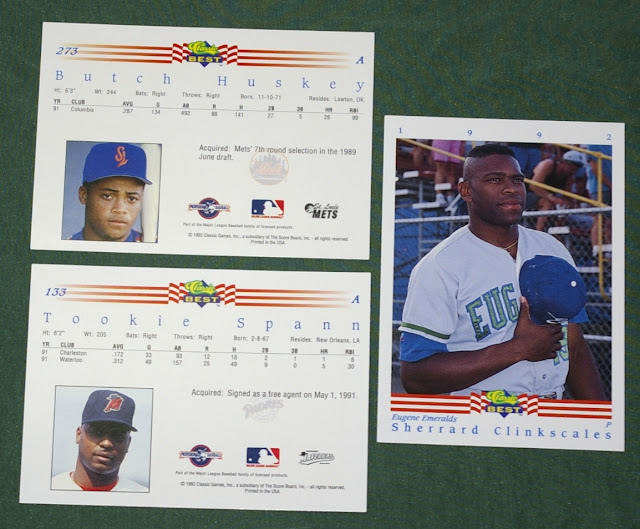 Giving you a look at the backs and a few of the more quirky names in the set. 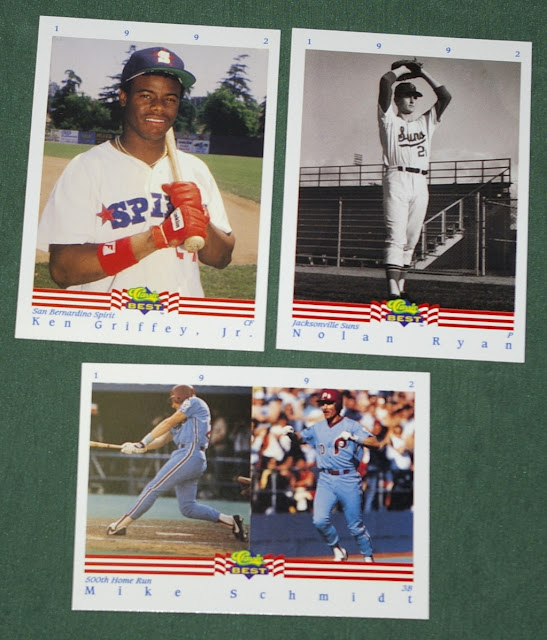 Classic snuck in 3 MLB stars. I often see that Griffey at the card show whilst digging through bins and for a second I'm like, "minor league Griffey card!" then I notice the "1992" and I'm like, "hey, Junior was already an established star by that point. 👎"
The Nolan Ryan is a nice card.. and one I don't recall seeing before.
The Mike Schmidt card is a bit of a head-scratcher. It has nothing to do with minor leagues. He had "a minor league card" in the previous Classic Minors set (the only such throwback in 1991 Classic Minors), so I guess I understand them not wanting to repeat themselves, but still wanted to milk their association with him. So we get a card commemorating his 500th home run from a few years earlier. The back features the full box score of the game, yet neglects giving the date. (Google tells me it was Apr 18, 1987.) 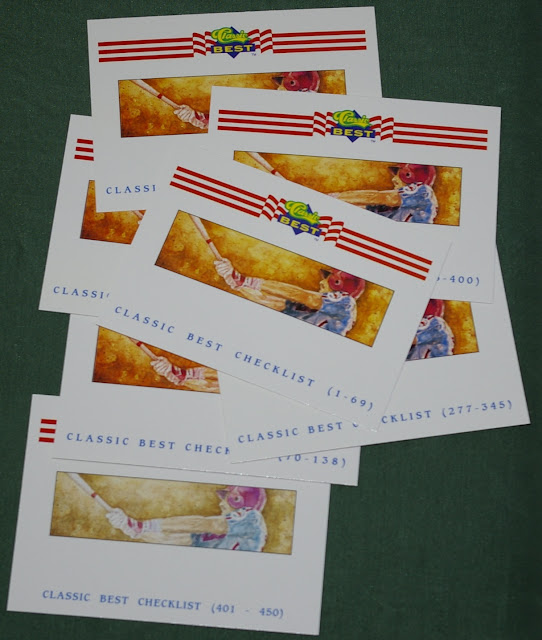 And an artist's rendering of one of the Schmidt photos (see 500th HR card) is used on every checklist. As a player collector, I feel like I should include these in my Schmidt PC and count them towards my goal of 100 unique cards of the guy.. but I don't necessarily feel good about that. Kind of like breaking up a no-hitter in the 9th with a bunt. Or losing the popular vote but still getting elected.

Anyways, there are some highlights from the set. But yeah, the gist of the cards are guys I've never heard of. Any team collectors out there (who also collect minor league affiliate cards), feel free to get in touch regarding trades. But do it ASAP, because I'm currently loading up a big box of cards to dump on Billy, and the majority of this set will likely end up in there.
Red Sox trader buddies... do you need/want the Sox from this set?
Same question to Cubs collectors. And Braves? Brewers? Pirates? Let me know.

Big thanks again to Julie for surprising me with this set as the prize for losing a contest of hers. Very nice of her to do.

On a side note...
It's a bummer that Julie hasn't been seen around the cardsphere for quite a while now (7 months since a new post on A Cracked Bat, and I don't recall her commenting anywhere since then either). I hope things are going well with her and she makes a comeback soon. And thinking about women cardbloggers... it's kind of depressing. The lady from Portugal (Hobby Cards Europe) hasn't posted much in the past several months. Caitlin, the young collector from Canada, seems to have gotten run off the blogs for reasons I'm not privy to. Funner Here, the cardblog run by a female Phillies fan, is completely dead and gone now. A Cardboard Problem isn't updated very often anymore (though Sooz is active on Twitter, with #CardChat being a cool weekly social event she runs). But yeah, it sucks that the cardsphere is such a sausage party these days. Even Fashion Shoes hasn't been around lately! (ok, that one was a joke.) I'd love to see more diversity around these parts.. gender, race, age, etc. But what can you do? I don't really have any suggestions other than to say collecting cards is fun, and it's made even better by being part of a community who shares your interest. So start a blog if you haven't already! Even if you're a middle-aged white guy.. but especially if you aren't!
👯👱👳👵👶👸😎
(Have you noticed Blogger now has an "insert special characters" button on the blog compose page? LOL. These are fun. I hope the faces are actually showing up for everybody, not displaying as plain squares or whatever.)

Ok, enough rambling.
Thanks for stopping by!
Posted by defgav at 4:02 PM